Few actors would likely envy Will Smith in his co-starring role in the live-action remake of Aladdin. The A-lister is understandably the top-billed star, and he’s got a memorable character to play — well, he’s got a character who’s almost too memorable to play. The late actor and stand-up comedian Robin Williams had many standout roles in his career, but the animated blue Genie who gives three wishes to a Middle Eastern thief may be at the top of the list. That, of course, could be a problem for any actor taking on a new iteration of the role, let alone one as effervescent and charming as Will Smith. Though Smith is definitely not doing a straight-up copy of Williams’ work, he can’t help but be stuck in the other actor’s shadow.

Just like in the 1992 film, this Aladdin is all about a kid who winds up being the only person who can enter the ominous Cave of Wonders and retrieve a magical lamp with a wish-granting Genie inside. In both the animated and live-action versions, the film opens with a character telling a captive audience the story of Aladdin; the animated film has a street vendor voiced by Williams who does so directly to the camera, while the live-action one has a human version of Smith weave the story to two children. But otherwise, when we see the big-name star, it’s when he’s a lovable, talkative Genie working with Aladdin to help him win the heart of Agrabah’s Princess Jasmine.

Smith’s version diverges from Williams’ in a few notable, and not terribly unsurprising, ways. Though Smith’s Genie does feel somewhat unstuck in time, he’s not running around making references to Jack Nicholson, Ed Sullivan and Arnold Schwarzenegger the way Williams did. Will Smith’s Genie does have the same songs Robin Williams’ Genie had, with the two big showstoppers “Friend Like Me” and “Prince Ali”. Each of those songs is full of the verbally dexterous lyrics the late writer Howard Ashman created for the animated film (as well as a few new, not-remotely-as-good lyrics from Benj Pasek and Justin Paul), but Smith’s take on each song is more rap-infused; it’s a decision that makes sense for the performer, without actually working on the whole. The songs in question weren’t written with hip-hop in mind, so no matter how they’re re-arranged to fit Smith’s range, it’s still off-kilter.

Another big choice that both makes sense and doesn’t quite work is giving the Genie a love interest. The version played by Robin Williams, in part because he doesn’t look exactly like Robin Williams, is laser-focused on helping Aladdin in his quest to escape his roots and fall hopelessly in love with Princess Jasmine. This time around, though Aladdin (Mena Massoud) once again wants to escape being a street rat and go off with Jasmine (Naomi Scott), he’s not the only one with a love connection. The Genie arrives with Aladdin, made up as the fictional Prince Ali of Ababwa, and is immediately struck by the charm and beauty of Jasmine’s handmaiden (Nasim Pedrad), in the same way that she’s struck by his charisma and physique. 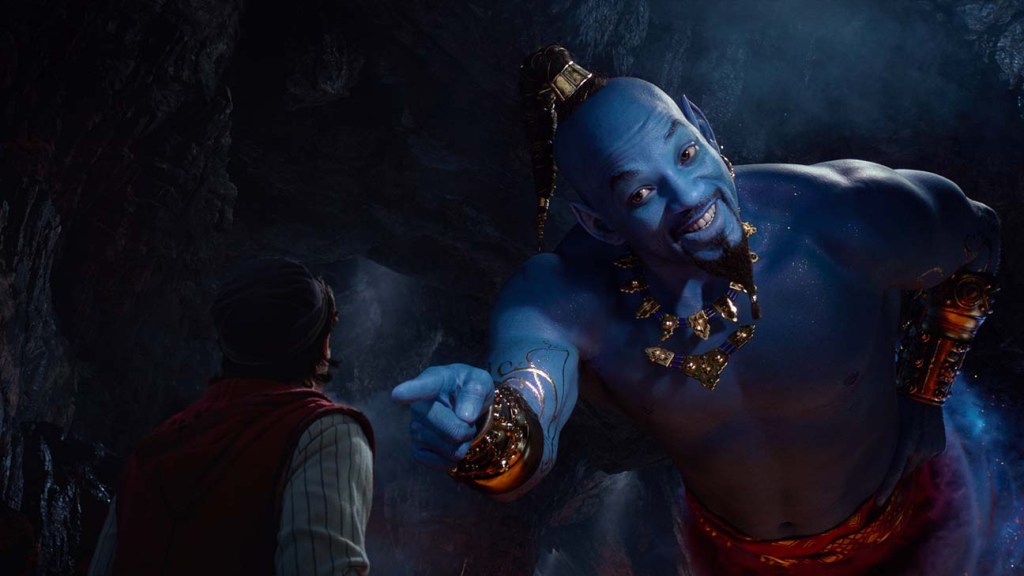 Because Will Smith cuts a much different romantic figure than Robin Williams, giving his character a love interest feels moderately logical. In the animated film, the Genie’s arc is specifically to be free of his literal shackles and having to grant wishes to anyone who rubs his lamp. That’s true in the live-action film, too, but the arc is more tied to the Genie not just being free but being free with someone else. (Pedrad’s character, in her own way, is shackled to her job, even if Princess Jasmine is a much more forgiving master.)

While it makes sense on paper, watching the Genie struggle to flirt his way into the heart of a woman he likes — mostly just because she’s pretty — feels like nothing more than an attempt to pad out the running time of the remake. The animated film is just under 90 minutes, where the new film is nearly 130 minutes long; since Pedrad’s character is an entirely new creation, anything related to her (genuinely amusing, to be fair) performance is an add-on.

Will Smith does get to come alive in a handful of moments in the film: the “Prince Ali” sequence is just about the film’s high point, in no small part because the energy Smith exudes is enough to make you believe that the people of Agrabah would fall under the sway of a fictional member of royalty. But too often, he’s just as shackled into his role as the Genie is to his life and his lamp. Smith’s performance may not mirror all of Williams’ improvisatory riffs (it’s hard to know for sure, but much of what Smith says here feels scripted), but he still has to hit the same beats and sometimes say the same lines the late comedian did.

In some ways, the role of the Genie in a live-action remake of Aladdin was an impossible, insurmountable task. Though no one expected (or perhaps even wanted) Will Smith to just do a direct cover of what Robin Williams did, it was also unlikely that people wanted this new Genie to really be that much of a new Genie. Being asked to fill the shoes of an iconic character is hard enough, but even more so when you can’t really break too far out of the mold cast by someone who, tragically, isn’t around to shepherd the part to completion. Will Smith unquestionably tries his best in Aladdin (and is close to the best part of the film, even though the CGI made to craft his blue Genie is often unsettling and creepy), but it’s the kind of challenge that’s just too hard to complete.