“I knew it was going to be big right off the bat,” Alan Ladd Jr., the former Fox studio head, says of Star Wars‘ blockbuster 1977 debut. But not everyone shared his confidence. In fact, most of Hollywood was downright skeptical, and as Ladd looks back at his history-making tenure at the studio, he recalls: “We couldn’t get any dates for the picture. It had no stars. You’d try to explain the story, and they didn’t know what you were talking about. The only way we were able to book it is because the theaters all wanted The Other Side of Midnight, so we said, ‘If you want that one, you have to take this one.’ And we managed to get it into the Avco in Westwood.”

While The Other Side of Midnight, a melodramatic adaptation of a Sidney Sheldon novel, has long since been forgotten, the ongoing Star Wars success story might never have happened if Ladd hadn’t bet on the young George Lucas.

As the son of the legendary 1940s film star whose name he bears, Ladd remembers sneaking onto the sprawling Fox lot as a kid, playing ?by its artificial lake and roaming its ?Western street. He followed his father into film but not as an actor. ?Instead, having established himself as an agent and producer, he accepted a production job at the studio in 1973 before being promoted to president of the film division in ?1976. When he first arrived, the studio ?was “in desperate shape — they hadn’t made any pictures that were ?hits, except for The Poseidon Adventure, so they had a little bit ?of cash.”

Ladd turned things around with movies like The Towering Inferno ?and the cult classic The Rocky Horror Picture Show. He greenlighted a series of women’s pictures — Julia, The Turning Point, Norma Rae, An Unmarried Women — explaining: “They were good scripts. When I grew up watching movies, all the men ?were off at war and all the pictures were about women. I thought, ‘Women liked that once, why wouldn’t they like it again?'”

When he learned that Mel Brooks was frustrated at Warner Bros., where Brooks made Blazing Saddles — “Warners hated it,” Ladd recalls with a laugh, “they wanted to cut the farting scene out of it, everything different and unusual” — he invited Brooks to Fox to shoot Young Frankenstein even though Brooks wanted to film in black and white. Ladd figured, “Why not? All the Frankenstein movies I saw as a kid were in black and white.”

That same familiarity with Hollywood history enabled him to envision Lucas’ plan for Star Wars. “He described the movie in terms ?I understood because he compared it to previous movies I’d seen” — ?like the 1955 World War II movie The Dam Busters.

Ladd’s otherwise golden instincts did fail him, though, when it came to the movie’s future value. When Lucas’ previous movie American Graffiti turned into a huge hit, the director’s agent, Jeff Berg, asked Fox to up his Star Wars fees by a few hundred thousand dollars. But Lucas then offered to forgo a raise in exchange for sequel rights — and later asked for merchandising in exchange for the first sequel.

“When that deal came up,” admits Ladd, “I said fine. At the time, merchandising meant nothing at all. Jaws had some sharks, ?but that was it. So we said, ‘Let’s give him the merchandising and let’s not give him a raise.'” 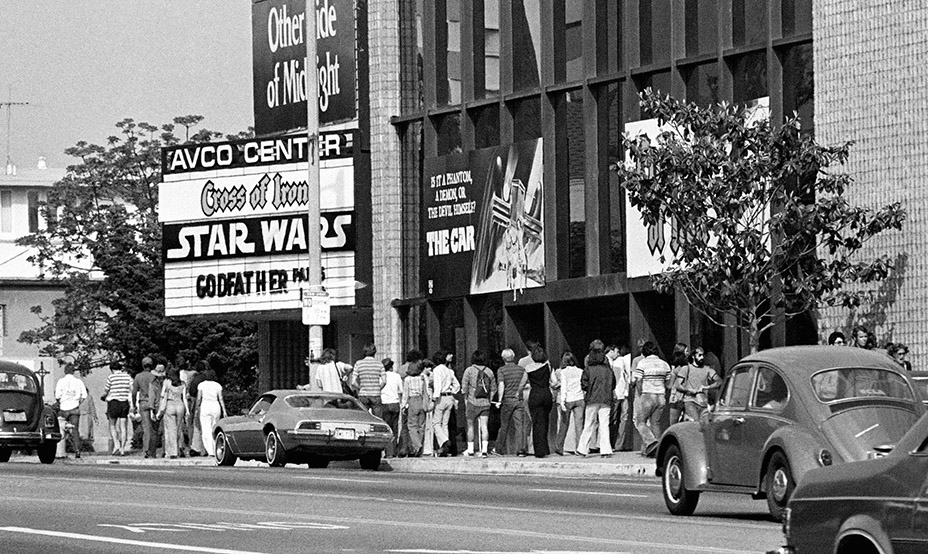