Alita: Battle Angel, a project nearly 20 years in the making, finally is in theaters this weekend. Based on the Japanese cyberpunk manga by Yukito Kishiro that debuted in 1990, the film follows amnesiac teenage cyborg Alita (Rosa Salazar) as she discovers love, loss and the facets of her identity within the complex backdrop of the impoverished Iron City and the floating city of Zalem above. James Cameron, who was introduced to the manga by Guillermo del Toro, had long planned to direct the project. As Cameron’s plate became increasingly full, Alita took on a fabled quality as one of those films always on the verge of happening but seemingly forever consigned to development hell. The film was finally greenlit in 2015 with Cameron, busy working on sequels to Avatar (2009) as co-writer alongside Laeta Kalogridis, and Robert Rodriguez in the director’s chair. Rodriguez, cinema’s Mexploitation one man band, may have seemed like an unexpected choice to pair with the blockbuster-driven Cameron, but that unexpected quality is what makes the film work so well and gives this film about identity a distinctiveness just as unique. Alita: Battle Angel seamlessly marries the styles of two very different directors who share similar interests for a result that stands as a high point in the careers of both Rodriguez and Cameron.

A fan-event screening on Jan. 31 of Alita was followed by a roundtable discussion featuring Rodriguez and Cameron. One of the questions was in regards to the filmmakers’ different approaches and how that affected their collaboration. Rodriguez, while noting he and Cameron’s long friendship and knowledge of each other’s styles, highlighted his history as a cartoonist and Cameron’s as an illustrator. Cartooning, Rodriguez said, employs a looser style, one less defined by realism and more so by whimsy. Illustration, on the other hand, requires a more scientific approach, a consideration of anatomy and mechanics. This artistic consideration and blend of both cartoon and illustration defines the look of the film. From the decision to give Alita the large eyes of her comic counterpart, to the technical consideration of how her body works and moves — a consideration we see come into play in every action sequence, Alita: Battle Angel captures the style of manga, arguably better than any live-action film ever has. It’s founded on conceivably workable tech and large emotional beats meant to create an immediate response. 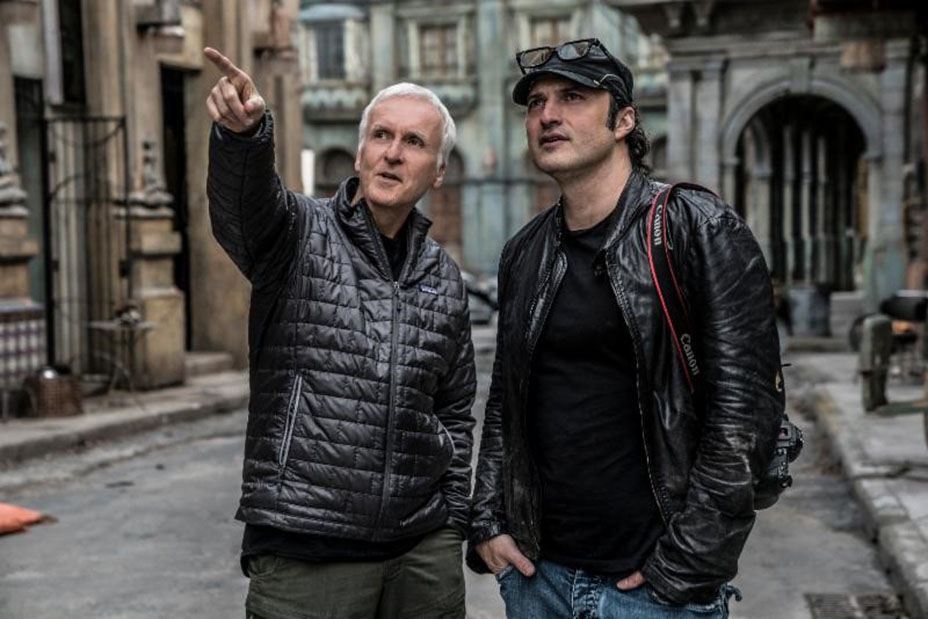 We’ve seen no shortage of robots, androids, replicants and cyborgs on their journey of self-discovery, but Alita manages to be unique while still hitting some of the familiar beats of identity construction by way of a coming-of-age story. Both Cameron and Rodriguez’s filmographies are populated with stories about individuals becoming who they were always meant to be. Cameron first explored this in The Terminator (1984) in which Sarah Connor (Linda Hamilton) discovers that she will lead the fight against Skynet and become the mother of a messiah who leads the human resistance against the Terminators. Rodriguez took the indie film world by storm in 1992 with El Mariachi in which a struggling mariachi performer (Carlos Gallardo) is forced to become an assassin after a miscommunication grows increasingly out of control. Cameron’s characters, from Sarah Conner, Titanic‘s Jack and Rose, and Avatar‘s Jake Sully, are often moved by some invisible force of destiny that seemingly guides their paths. They are fated to be heroes, to fall in love, to save themselves and a species because it is written in the history or future of the worlds Cameron creates, or invests in. But Rodriguez’s characters, from El Mariachi, the Gecko Bros., Cherry Darling and Marv are moved forward by circumstantial situations. They are ordinary and insignificant until their normal existence crashes into the fantastic — often by way of a bar fight. And even then, they are characters without a roadmap, travelers shaped by the world, rather than them shaping the world themselves.

Alita is, in as literal a sense as the film’s world permits, a fallen angel, a messiah cut from the same cloth as Cameron’s other heroes. The film feels mythic in its Paradise Lost allusions and its take on Heaven and Hell by way of a class divide. But it’s also a film that feels rooted in the lives of its characters and their everyday struggles. Rodriguez and Cameron have both carved out a space for working-class heroes, but Rodriguez is also interested in the background players, the folks who make up Mexican villages and sell coconuts outside of town and as a result, Alita is too.

Iron City, located somewhere in Latin America, showcases Rodriguez’s empathetic consideration of lower-class by focusing on food stands, medical clinics and bars — ultimately creating a world that feels just as lived in as Ciudad Acuna. Cameron isn’t averse to exploring class divisions, as highlighted by Titanic (1997), but he is more interested in seeing the impoverished rise above than spending time with them below. Alita isn’t just a messianic figure because of her Cameron-esque overarching struggle of good versus evil, but also because she is a woman of the people, someone who makes connections and lives in Iron City. This is key to what makes Alita different from other messiah-inspired sci-fi heroes. She doesn’t swoop in and save a city that she exists outside of, rather she becomes part of a community and works to save Iron City within the system that’s been created, a system that recognizes greatness, and ascendance, through the sport Motorball. This heroism through sports and athleticism not only grounds Alita in her world, but grounds her in ours as well by further linking an escape from poverty with professional sports, as highlighted in the documentary Hoop Dreams (1994). True to both Rodriguez and Cameron, Alita: Battle Angel carries more than a few powerful social messages under the guise of what many may assume is simply a well-crafted popcorn movie. 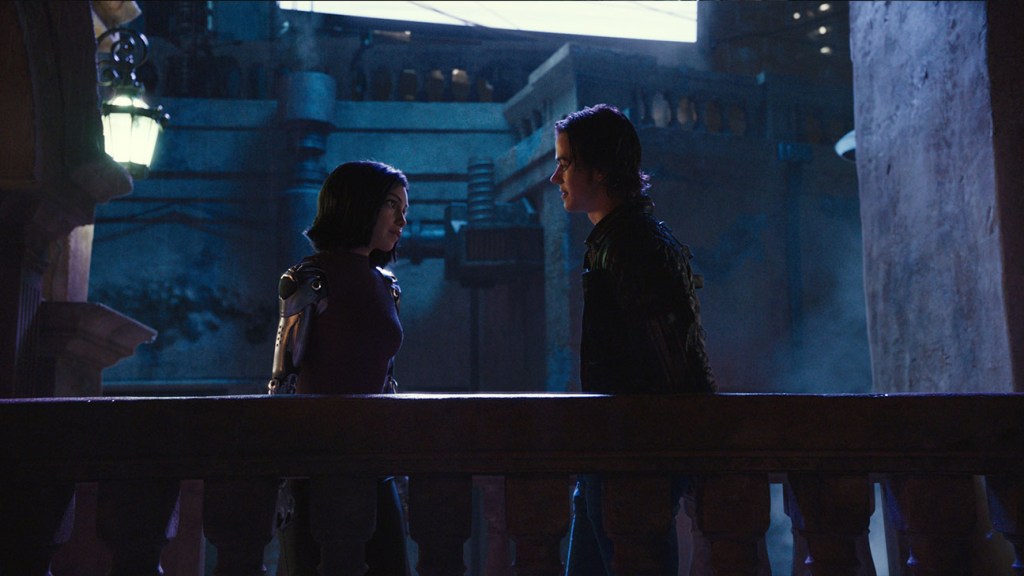 In the midst of Alita’s large scope, theological references and sociological considerations, there’s an episodic quality to the film that is unmistakably Rodriguez. There’s a fascinating structure to Rodriguez’s films that often makes them feel as if they were composed of vignettes. This is, of course, most evident in the multi-story Sin City (2005), but even in his El Mariachi led Mexico Trilogy and From Dusk Till Dawn (1996) there is an elegant segmented quality to his films in which a collection of scenes is a complete story in itself, nesting dolls inside the larger story. It’s a structure so noticeable that it’s a wonder Rodriguez hasn’t lent his hand to more comic book/manga adaptations. Over the course of the film, Alita evolves, and each shift we see in her body and clothing choice is highlighted by a specific moment or battle that feels like a self-contained issue. Unlike most coming-of-age stories or heroic journeys, Alita isn’t simply defined by a beginning point and an ending point. There’s no single specific sword-from-the-stone moment or destruction of the Death Star that cements her identity and gives her purpose, rather it’s an identity in which every trial is as equally important as the last and shapes her into something more than another representation of Joseph Campbell’s Hero’s Journey. Alita plays different roles over the course of the film — daughter, teenager, hunter-killer, girlfriend, woman, warrior, athlete — and none of these carry more weight than the other. In the roundtable discussion, Rosa Salazar described Alita as a 10-sided die and that’s as accurate a description as there could possibly be for a character who is the result of a collaboration that has had nearly thirty years to take shape in her current form.

Salazar, in a motion-capture performance that is nothing less than an Andy Serkis-level achievement, finds a way to convey both Cameron and Rodriguez’s points of view through Alita. She is driven by a larger destiny but also circumstances that shape not the symbolic figure who takes on that destiny, but the person. She is both ordinary girl and a symbol for rebellion simultaneously. This duality is highlighted best by a scene in which the sword-carrying Alita, fully in control of her warrior-bred abilities, says, “and I’m just an insignificant girl” a callback to the same line earlier in the film in which she truly believes that to be the case. Alita manages to feel both vast and intimate, and in the process never loses sight of Alita’s arc. Through Cameron’s signature world-building and technological focus, and Rodriguez’s empathetic social portrait and cartoony stylistic choices, Alita: Battle Angel is a complex love letter to the multifaceted nature of humanity and the identities we construct for ourselves.

Why Christoph Waltz Is So Private About His Characters