If Alita: Battle Angel disappoints at the box office it would make for an inauspicious chapter for Fox as it prepares for life under Disney ownership, as well as a disappointment given the prestige of the talent behind the scenes.

The film’s story is set in the distant future, when the solitary Dr. Ido (Christoph Waltz) discovers the remains of a highly advanced cyborg left over from a massive war that tore society apart. When he reactivates Alita (Rosa Salazar) she has no memory of her past and no idea what her purpose in the world is. Her existence is dangerous, though, and she attracts the attention of a number of interested parties, including the criminal kingpin Vector (Mahershala Ali).

With a screenplay from James Cameron and direction from Robert Rodriguez, Alita: Battle Angel should be on the tips of every sci-fi action fan’s tongue. Yet the 60 percent rating the movie has on Rotten Tomatoes indicates a lackluster response could await the movie. To try and counter that, Fox has worked to build up the movie as a can’t-miss cinematic experience, promising audiences massive spectacle in the movie.

Alita is shown in extreme closeup as she applies some kind of warpaint makeup under her eye on the first poster. There’s no story details or other information offered here, this is just about teasing things. The perspective shifts out on the second poster to show us more of Alita standing in front of the futuristic society she lives in, though no further story or other details are offered.

The full cast of characters are seen on the theatrical one-sheet released in December, Alita standing heroically in front of a collage of faces as well as a zoomed-out shot of the city where the action takes place. Each of those characters is broken out on individual posters released in January, but none offer names or other details about who it is the audience is looking at.

The hero is flanked by an adversary and an ally on the IMAX poster, which makes the standard claim about seeing even more of the picture in that format. The Dolby poster takes a more artistic approach, painting Alita in bright blue and purple colors that convey the message of this being comic-esque. For Real 3D the same character photos seen on the theatrical poster are just rearranged a bit.

The first trailer (8.3 million views on YouTube) from December, 2017 — when the movie was still scheduled for the middle of 2018 — establishes the universe the movie takes place in more than anything. Alita wakes up and is greeted by her creators, who tell her it’s up to her to do good with the artificial body she’s been given. She forms a romantic bond with someone and is fighting someone/thing else. The world she lives in seems futuristic and messy, like everything (including her) is made with the spare parts of something else.

As part of the movie’s overall presence there, a trailer (12.8 million views on YouTube) debuted at San Diego Comic-Con in July 2018. This one starts by explaining there was a war that left the world a very different place, one Alita is determined to fix so the strong no longer prey on the weak free from repercussions. We find out she is special, a creation that was thought long-gone who has special abilities. That means everyone is after her, while at the same time she wants to learn the secrets of her past her creator is hiding from her.

It wasn’t until the middle of November that a final trailer (7.4 million views on YouTube) was released. This one starts off by presenting Alita as a rebellious young woman, chafing against the rules imposed by her father. But those rules, she finds out, are in place because she’s a dangerous weapon that various parties are out to control, but who keep underestimating her strength and potential. 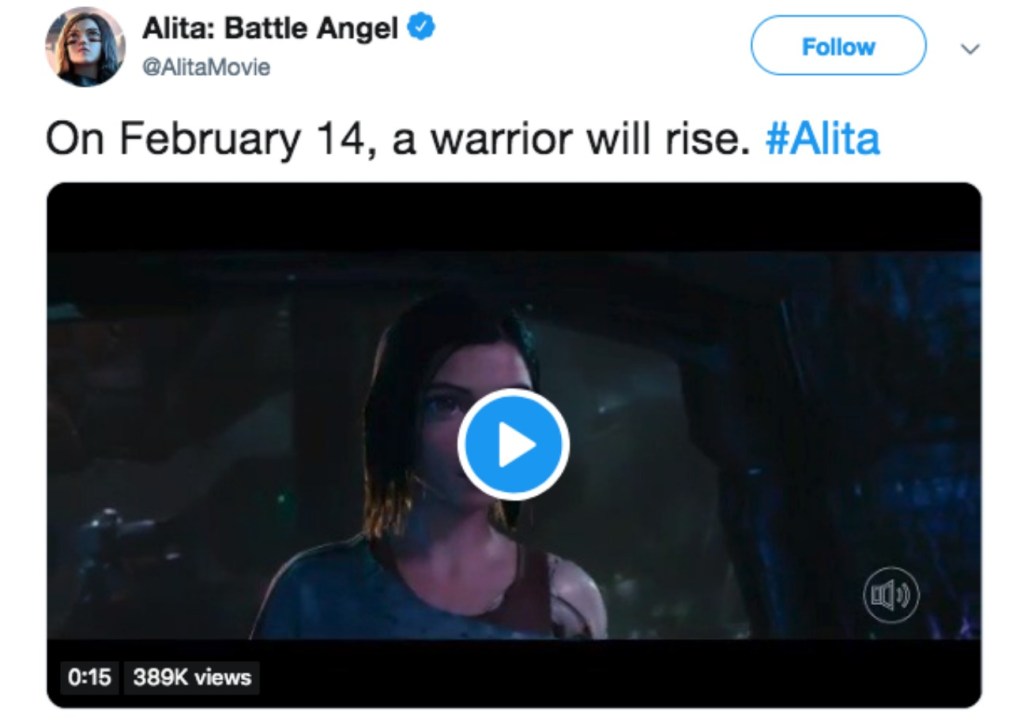 A Twitter promoted post from early December used a short video to introduce people to Alita. Later on a Super Bowl TV spot played up how the audience would be transported to an incredible world and introduced to an exciting new character in the movie.

? LootCrate offered San Diego Comic-Con 2018 attendees special access to an off-site event featuring a Q&A with the cast and crew as well as a first look at new footage from the movie.

? Arizona Iced Tea ran a sweepstakes tied to the movie-branded cans it released.

? Carl’s Jr., which gave those visiting its establishments a movie-branded soft drink cup.

Those and other brands sponsored the Alita Super Sweepstakes, which took place during the recent Super Bowl and which encouraged fans to enter to win prizes from each brand.

In March of last year, when the movie was still scheduled for late 2018, Fox brought a recreation of Iron City — where the action takes place — to SXSW along with new footage and an appearance by Rodriguez. A few months later producer Jon Landau appeared at CinemaCon to assure industry insiders and press that Rodriguez was actively working on the film as they spoke. The movie was also part of the later CineEurope presentation from the studio.

The “Iron City Tattoo Parlor” was subsequently offered to attendees of VidCon while the full “Passport to Iron City” was brought to San Diego Comic-Con in June.

Another delay was announced in late September that moved the movie from December to February. Right after that Rodriguez appeared at New York Comic Con with 20 minutes of 3D footage from the movie to keep hyping it to fans and maintain their interest in it.

A clip from early December showed Alita being confronted in an alley by some of those who want to unlock her secrets. Later on the production team talked about how they worked to make Alita herself more lifelike.

Amidst a flurry of news about original songs in movies this season it was announced the soundtrack would feature new music from Dua Lipa, music teased in advance of its release.

The Iron City recreation was unveiled in New York, Austin and Los Angeles, allowing visitors the opportunity to visit a detailed version of one of the sets that also offered more information on the film. The experience featured craft beers, assignments that gave people something to do after their visit and more.

Starting in mid-January Fox went heavy with a series of featurettes, clips and other videos to try and sell the spectacle as well as the story of the movie. That included a conversation between Cameron and Rodriguez, a look at the work done by WETA on performance capture, who Alita is and what she wants to do, an introduction to Alita creator Yukito Kishiro and a promise that the movie is a cinematic experience that can’t be missed. Early “fan” screenings were held in select cities earlier this week to try and stoke some conversations. 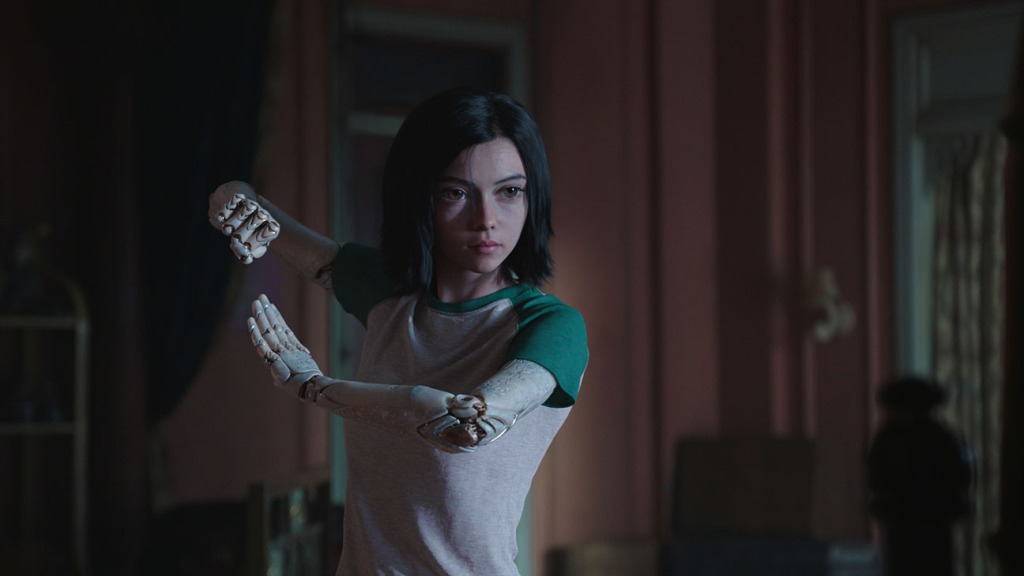 There appears to have been a late push to position the movie as a boundary-pushing cinematic experience, which wasn’t helped by the frequent changes in its release date. Throughout a string of featurettes, interviews and clips it is clear Fox wanted to emphasis the behind-the-scenes pedigree of the film, relying on Cameron and Rodriguez as well as the reputation of WETA Workshop to turn people out while also working in elements of the story as part of that tech-heavy narrative.

The potential lack of excitement could be indicative of the kinds of problems non-franchise movies have in trying to break through the clutter. Alita arrives when fans are still discussing Black Panther (thanks in part to its recent Oscar nominations) and anxiously awaiting both Captain Marvel and the still-untitled Star Wars: Episode IX.