This week sees the release of the seventh installment in The Conjuring Universe. Any fear that the franchise will soon be running out of steam is quickly assuaged by this latest entry, which offers a full-tilt monster mash inside a haunted house. Annabelle Comes Home proves there’s still plenty of life (and death) left for James Wan’s horror universe as it opens the doors into the Warrens’ museum even wider. The third entry in the Annabelle series, directed by longtime writer and first-time director, Gary Dauberman, takes place between The Conjuring and The Conjuring 2 and sees Patrick Wilson and Vera Farmiga reprise their roles as Ed and Lorraine Warren. But the older Warrens take a backseat this time around, and it’s their daughter, Judy (Mckenna Grace), and her two sitters Mary Ellen (Madison Iseman) and Daniela (Katie Sarife) who find themselves the subject of unwanted supernatural attention from Annabelle and a host of evils the demon has unleashed.

Through The Conjuring Universe, New Line is building a catalog of monsters to rival that of Universal’s golden age. There’s Annabelle, the Nun, the Crooked Man, and La Llorona, but New Line introduces us to several new forces of evil in Annabelle Comes Home, each rife with its own mythology worthy of spinoff movies in this ever-expanding franchise. Dauberman recently told The Hollywood Reporter that “we’re not looking at any of these as a launchpad for the next movie. We’re hoping the audience responds in a way that we can tell further stories, but it’s not the reason why this movie exists.” So while Annabelle Comes Home exists on its own terms and not to set up other films, it decidedly entices with the possibility for more stories.

Brides are commonplace in horror. From those of Frankenstein and Dracula to the ones steeped in gothic horror, there’s long been interest in taking a female character on what should be one of the happiest days of her life and dragging her down toward tragedy and horror. One of the new cursed objects we’re introduced to in the Warrens’ artifacts room is a wedding dress. The dress is said to drive whoever’s wearing it into a violent frenzy, and the knife-wielding specter (Natalia Safran) of a previous owner is a persistent threat in the film. This is a character who feels tailor-made to break out in a spinoff of her own, one that perhaps takes a horror jab at some of the tropes of romantic wedding comedies. Plus, the idea of a bride driven to bloodlust at her wedding and viciously attacking guests is too great a scenario to pass up. With the dress-centric horror film In Fabric making the festival rounds and gaining praise, I can’t imagine it’ll be too long before New Line says yes to a dress of their own. 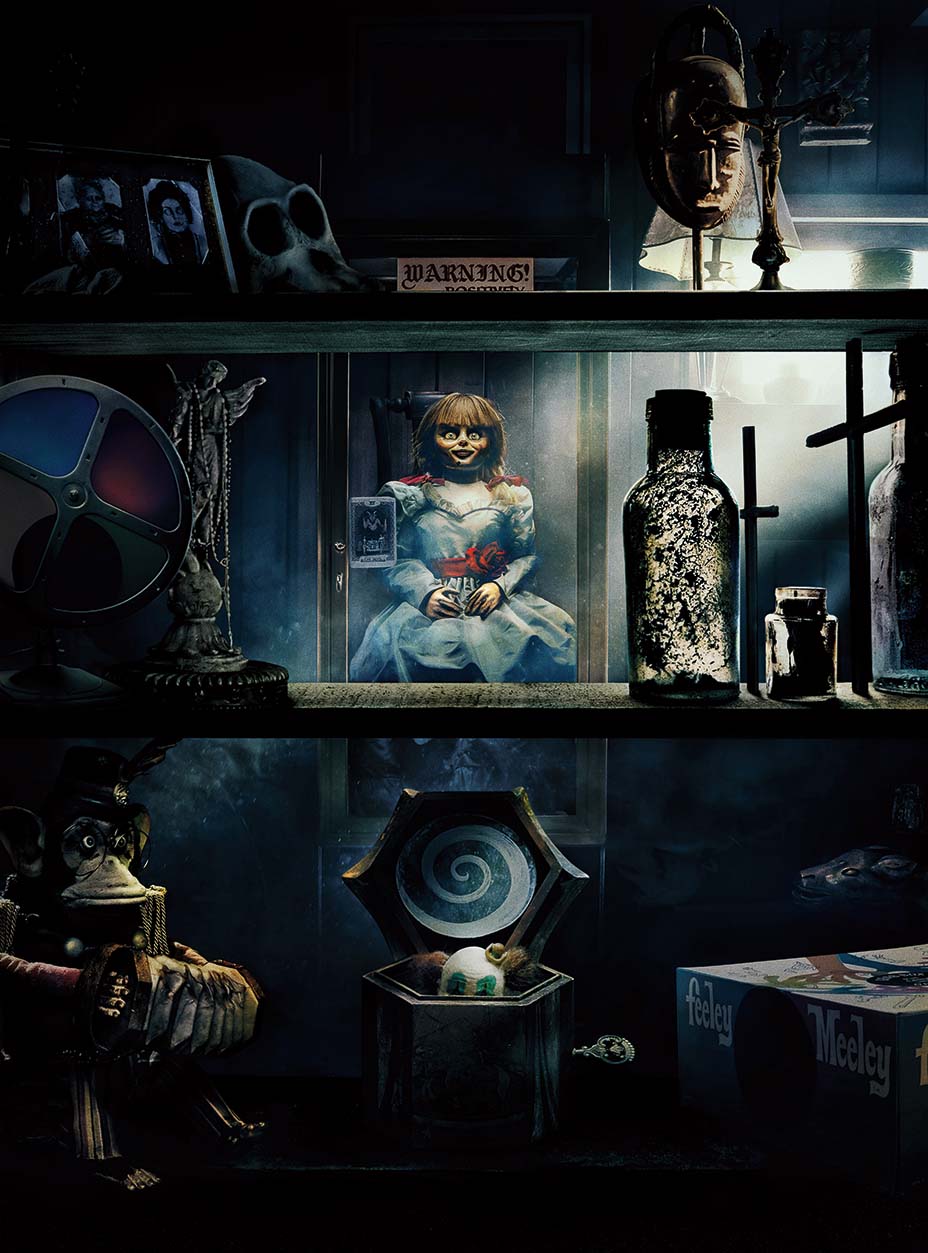 The most terrifying addition to The Conjuring Universe is the Ferryman, a Charon-esque serial killer who places coins over the eyes of his victims and is said to have taken their souls into the underworld. His return to the land of the living is responsible for some of the most jolting moments in the film as his coins create a path to him. Dauberman spends a lot of time building up this character through the Warrens’ case files, and the Ferryman becomes almost as central to Annabelle Comes Home as Annabelle herself. It’s quite reminiscent of the way Wan utilized in the Nun in The Conjuring 2. One of the aspects that’s interesting about the character’s mythology is that photographs in the case files highlight that one of the Ferryman’s earlier victims looks exactly like Mary Ellen. Dauberman told THR that “the reason why [the Ferryman] is there is because I thought it could be a really cool scare, and it could fit with the Mary Ellen backstory I had early on.” One has to wonder if we’ll see more of that backstory in a Ferryman spinoff, one that sees Madison Iseman return, albeit as a different character.

Werewolves have become a bit trite in the realm of horror. Like vampires, they are overexposed, not only in horror movies but on television and in novels and comics within a variety of genres. They’ve been laughed at as comedic gags and loved as romantic interests, and it’s a tough task to make a werewolf scary again. Not to mention, the effects work can create mixed results. Yet Annabelle Comes Home manages to bring a level of fear back to the werewolf by making it a demonic force unbound by any of the rules we’ve come to associate with werewolves over the centuries. The most fantastic of the creatures in the film, this werewolf demon has its roots in the reality of the Warrens’ work. While the Warrens are best known for dealing with demonic possessions and evil spirits, their work in the late ’80s took them to Southend, England, where they claimed to have exorcised a werewolf demon from a carpenter named Bill Ramsey. Clearly the ’70s-set Annabelle Comes Home has moved up the timeline of these events some, but there is now a space for werewolves within The Conjuring Universe. It may be a tougher sell than some of the more original creations in the film, but Wan and Dauberman have both been able to make the once-tired possession story feel fresh again, so anything is possible. And with the vampire-centric Salem’s Lot in their near future, a stab at werewolves doesn’t seem that unlikely.

The final adversary on this potential list of spinoffs isn’t a creature at all. Rather it’s a television screen that gives viewers a glimpse of their not-too-distant future, and ultimately their gruesome deaths. It sounds silly in a kind of TerrorVision (1986) way, but the screen in the artifact room is behind one of the film’s most chilling moments, in which Daniela slowly becomes aware that something is lurking behind her. It’s a bit gimmicky, sure, but as one of the cursed objects in the artifact room that doesn’t have a mythology attached to it, it would be interesting to know the story of this screen: who created it, and why? The Conjuring Universe has given us no shortage of humanoid monsters, but this television screen could provide the opportunity to do something completely unexpected and fresh. That certainly sounds worth a watch.

Annabelle Comes Home may have completed the franchise’s first full trilogy, but with that it also achieved what all cinematic universes hope to do in that it laid the groundwork for even more potential stories and unique visions of horror. With The Conjuring 3 planned for release in September of next year, and The Crooked Man and The Nun 2 in the works, The Conjuring Universe won’t be halting the nightmares anytime soon. So why not let our heads play host to a few more? We’re eager to see what kinds of terrors a cursed wedding dress, a ferryman, a werewolf demon, and a haunted screen might unleash.

The Legends Behind the Artifacts of 'Annabelle Comes Home'