With cinematic universes multiplying rapidly in Hollywood over the past couple of years, it’s clear that minting a garden-variety franchise simply isn’t enough anymore. Now you need not just sequels, but prequels and spinoffs and sequels to said spinoffs, all painstakingly mapped out ahead of time so as to remain a cohesive, interlinked cinematic world. While Marvel Studios is the gold standard, not every universe has had so few bumps in the road. In addition to Marvel and DC, Disney has Star Wars, Universal has its (admittedly struggling) Dark Universe and now Warner Bros./New Line has The Conjuring. While that last universe is the latest to bill itself as such (namely in the trailers for this weekend’s Annabelle: Creation), The Conjuring and Conjuring 2 director James Wan has had world-building in mind from the start.

“Very early on, I wanted to call the Conjuring films The Warren Files,” says Wan, who chatted with Heat Vision while en route to the Australia set of Aquaman. “And so that was going to be a more encompassing sort of umbrella name for this whole world. We didn’t end up going with that title, obviously, but I guess that spirit has always sort of lingered around.”

The spirit has so far been with Wan and his creative partners. In addition to the first two blockbuster Conjuring films, the 2014 spinoff Annabelle became a massively profitable hit ($256 million worldwide on a $6.5 million budget) and Annabelle: Creation (actually a prequel to the first movie) is primed to do similarly strong business. Wan and the studio are so confident in their growing universe that there are several projects in the pipeline beyond that, including Conjuring spinoffs The Nun and The Crooked Man (the former helmed by Corin Hardy) and The Conjuring 3, which Wan says he will most likely not direct, owing to his commitments on Aquaman, which is set to open in December 2018.

Unlike the Marvel and DC universes, of course, the Conjuring series isn’t based on any preestablished mythology (though the films do use alleged “true events” as a jumping-off point). Wan and his collaborators are essentially creating these interconnected stories from whole cloth. Accomplishing this requires a different approach, says Wan, who explains that he’s tackling the universe in the same way a TV showrunner would, mapping out plotlines and character arcs. “If you start approaching it that way, you kinda see where the films can sort of fan out, where the storylines can fan out and become other stuff,” he says.

Like the Marvel and DC cinematic universes, the Conjuring franchise is a potentially career-making prospect for up-and-coming filmmakers. Annabelle: Creation director David F. Sandberg — whose 2013 short film Lights Out was adapted into a hit feature-length movie last summer — recently made the leap into the blockbuster sphere by signing on to helm Warner Bros.’ and New Line’s Shazam, a solo showcase for the DC comic book hero. Initially leery of directing a standard-issue horror follow-up, Sandberg tells Heat Vision he was heartened by both the script and the creative freedom he was allowed.

When a Horror Movie Shows Too Much

“The only sort of mandate … was to put in these little references to the other movies,” he says, referencing the Easter eggs and plot crossovers that are scattered throughout the film. “But otherwise, it was very free.”

Wan agrees that directors brought on to the franchise are afforded a fair amount of “leeway” in approaching each individual film. However, when it comes to the visual style, he’s dead-set on keeping the elegant, old-fashioned cinematography he introduced in the first two Conjuring movies intact down the line.

“That is the aesthetic that I feel like I’ve set up … and I really want to keep that classical sort of old-school storytelling going on with all these films,” says Wan. “Those are the kind of horror movies that I really love, and so I want to make sure that all these films within the Conjuring world feel like they came from the same place. I don’t want them feeling too disjointed from a visual standpoint.” 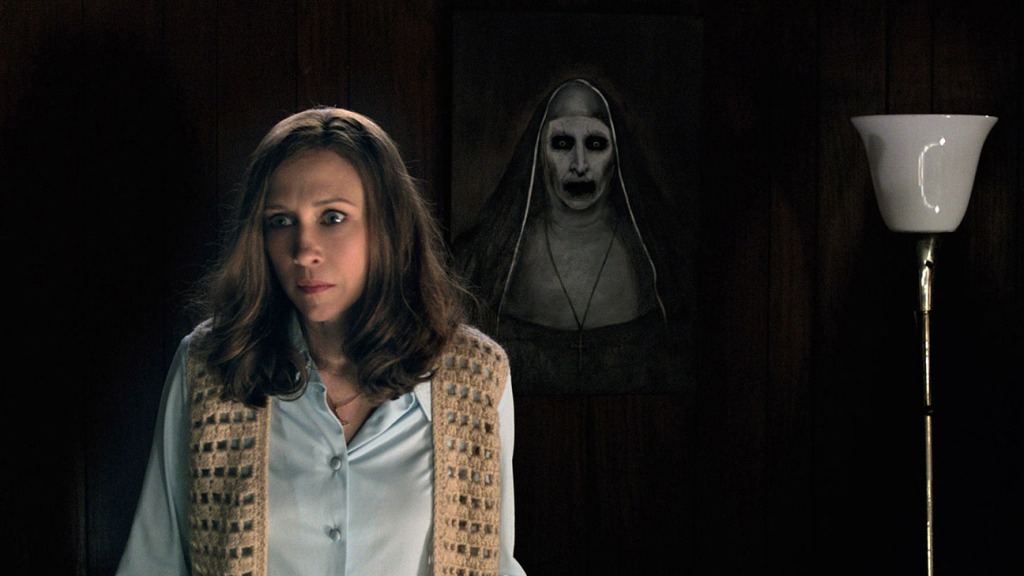 Next up for the franchise is The Nun, a spinoff based on a malevolent spirit introduced in The Conjuring 2 that Wan describes as “The Name of the Rose crossed with The Conjuring.” Beyond that film are The Crooked Man, The Conjuring 3 and, potentially, The Nun 2, which Wan claims to have a take on already. “I do know where potentially, if The Nun works out, where The Nun 2 could lead to,” he says, “and how that ties back to Lorraine’s story that we’ve set up with the first two Conjurings and make it all come all full circle.”

In other words: The Conjuring universe is just getting started.

Annabelle: Creation conjured up a pleasing $35 million from 3,502 theaters in its domestic box-office debut over the weekend, more than enough to scare off the competition even as it came in somewhat behind the previous three films in the Conjuring franchise.

All That Water Is Making 'Aquaman' "Super Complicated" to Shoot