Anne Douglas, a film publicist who first met Kirk Douglas on the Paris set of Act of Love in 1953 and married him a year later, died Thursday. She was 102.

Douglas died at the longtime Beverly Hills home she shared with the legendary actor and husband of 66 years, her family announced. He died at age 103 on Feb. 5, 2020.

She worked for director John Huston as a location scout and assistant on Moulin Rouge (1952), then began a three-year stint in 1953 as head of protocol at the Cannes Film Festival, scheduling parties and making sure they were filled with celebrities and media.

Kirk was divorced from actress Diana Dill and secretly engaged to Italian actress Pier Angeli and Anne was married to a Belgian, Albert Buydens, when they met. He offered her a job as her assistant, and she immediately turned him down.

“She finally agreed to work with me on a trial basis, making it clear our relationship would be strictly business,” he wrote in Kirk and Anne: Letters of Love, Laughter, and a Lifetime in Hollywood, the 2017 book he co-authored with his wife.

“We talked for hours, and I had a strange feeling in my heart that I could fall in love with this man,” she wrote. “I didn’t want to, because I had seen too many young women enter into intense affairs with visiting movie stars — Dean Martin, Marlon Brando, Cary Grant among them. Then the film wrapped and the men returned to their wives and families.”

Still, they began a complicated relationship on the Anatole Litvak-directed Act of Love that continued when Kirk relocated to Italy to shoot Ulysses (1954) — she was a publicist on that film, too — and then to the Bahamas, Jamaica and the U.S. making 20,000 Leagues Under the Sea (1954).

Finally, during a rare moment when both were in Los Angeles, they spontaneously flew to Las Vegas and were married by a justice of the peace on May 29, 1954. Their sons, Peter and Eric, were born in 1955 and 1958, respectively. (Eric died in 2004 at age 46 of an accidental drug overdose.)

Hannelore Marx was born on April 23, 1919, in Hanover, Germany. Her father owned textile stores in the city and was the exclusive importer of a strain of silk that the government purchased to make parachutes. Her mother was a socialite.

After her parents divorced, she attended boarding school in Switzerland and became fluent in English, French and Italian.

She married Buydens, and they fled Belgium and moved to Paris during World War II. She got a job writing German subtitles for movies, then was hired in 1948 to produce a program for NBC called Paris Cavalcade of Fashion.

Kirk was married to Dill (the mother of two-time Oscar winner Michael Douglas and his brother, Joel) from 1942 until their divorce in 1951. He said their marriage began to fray as he was preparing for his star-making turn in Champion (1949).

The couple split amicably, and Kirk and Anne became good friends with Diana and her new husband, Broadway producer and novelist Bill Darrid. 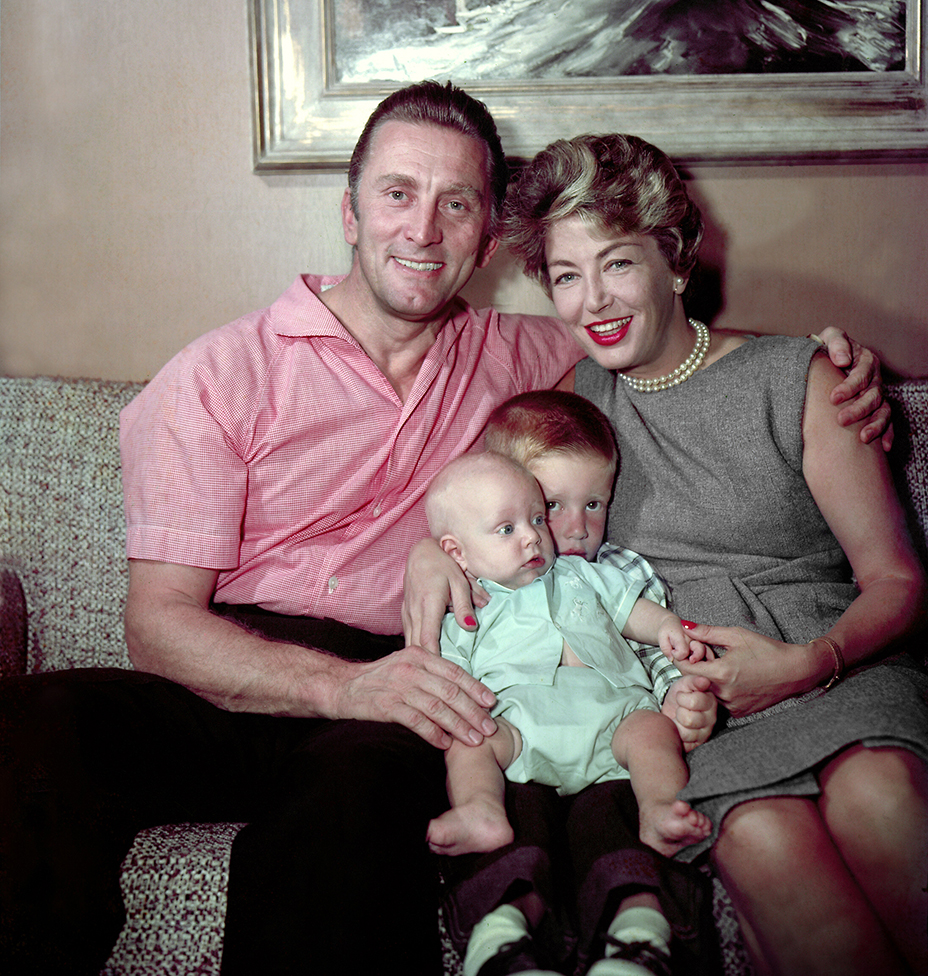 In 1958, Anne refused to allow Kirk to travel on a private plane from Palm Springs to New York with director Michael Todd. “I don’t know what came over me, but I had a strange feeling,” she wrote in their book. “Absolutely not, Kirk. I don’t want you on that plane. You can fly commercial and meet him there.”

Kirk was furious and said that if he couldn’t fly with Todd, well, he wouldn’t go at all.

On the car ride back to Los Angeles the next day, they heard on the radio that Todd’s plane had crashed in New Mexico and that he and the three others on board had been killed. They pulled off to the side of the road and embraced.

“Darling, you saved my life. I will always trust your intuition from now on,” Kirk told her.

As Dorothy Chandler’s “lieutenant” in the campaign to build the Los Angeles County Music Center, she convinced moguls and movie stars to double and triple their initial contributions to the cause. After it opened in 1964, she served on the boards of the Mark Taper Forum and the Center Theater Group for decades and arranged the Douglas Foundation’s large gift to build the CTG’s Kirk Douglas Theatre in Culver City.

In 2012, Anne and Kirk announced pledges totaling $50 million to five nonprofit organizations, including the Motion Picture & Television Fund, through their foundation. They donated another $15 million to the MPTF home in 2015. To date, their foundation has contributed more than $118 million to worthy causes.

“She brought out the best in all of us, especially our father,” Michael Douglas said in a statement. “Dad would never have had the career he did without Anne’s support and partnership. Catherine and I and the children adored her; she will always be in our hearts.”

Donations in her memory may be made to the Anne Douglas Center at the Los Angeles Mission, 310 Winston St., Los Angeles, CA 90013.