[This story contains spoilers for Annihilation and Ex Machina.]

This same endeavor toward newness could also be attributed to the film’s director, Alex Garland, whose adaptation of Jeff VanderMeer’s best-selling novel, the first book of the Southern Reach trilogy, makes major departures from its source material. For his second feature — like in his previous film, the Academy Award-winning Ex Machina — Garland refurbishes well-worn science fiction concepts and retrofits them to modern, largely existential concerns.

After years of being one of Hollywood’s top screenwriters, Garland continues to define himself as a heady sci-fi director of films worth repeat viewings. While Annihilation is based on preexisting source material, unlike Garland’s original screenplay for Ex Machina, the two films exist in conversation with one another. The changes made to the source material of Jeff VanderMeer’s novel ultimately serve Garland’s goal of exploring humanity’s relationship to nature alongside his prior exploration of humanity’s relationship to machines. Both of these relationships are tinged with horror, though their most frightening aspects come from what is illuminated, rather than what exists in the dark.

In Ex Machina, the unknown manifests within the execution of a Turing Test, performed on the A.I. Ava (Alicia Vikander) by programmer Caleb (Domhnall Gleeson). Annihilation’s unknown is far broader, as Lena and a group of scientists (played by Jennifer Jason Leigh, Tessa Thompson, Gina Rodriguez and Tuva Novotny) venture into a research site known as Area X in order to explore biological phenomena stemming from a source at a lighthouse, phenomena theorized to be the result of alien, spiritual or extra-dimensional powers. Early on in both films, Garland provides casual deconstructions of a higher power, seemingly the ultimate unknown.

Isaac, who appears in both of Garland’s films, is the linchpin between the two works. In Ex Machina, Isaac’s Nathan likens himself to God, providing his ability to create true artificial intelligence pans out. In Annihilation, it’s once again Isaac, this time portraying Lena’s husband, Kane, who opens up the subject of the divine and leads Lena to state, without hesitation, that “God makes mistakes.” 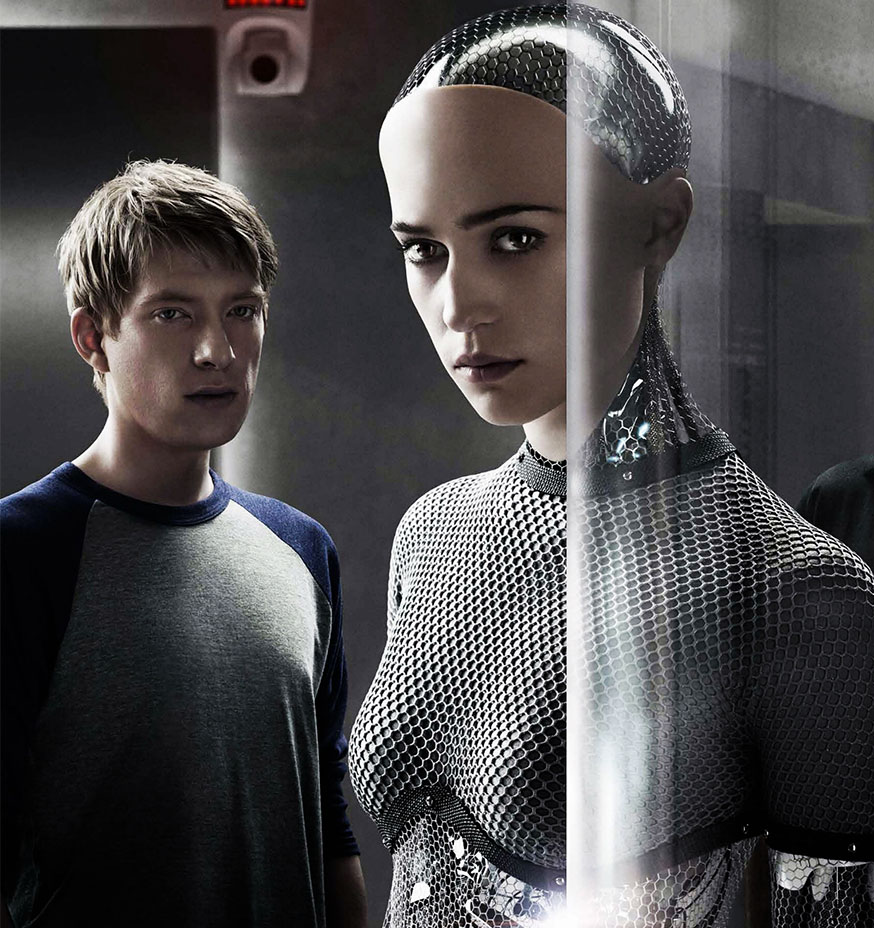 There is a mythic quality to both of Garland’s films, and the idea that deities make and unmake according to their own imperfections while leaving humanity in the wake of their destruction is an alarming prospect. The process of destruction and re-creation in Garland’s films is conveyed in terms of waves. In Ex Machina, we’re shown footage of Nathan taking apart, brutally so, his failed attempts to create life in the form of A.I., each model being a wave or phase in the process of Ava’s eventual creation, as well as Nathan’s evolution from man to god. The waves of creation and destruction in Annihilation are entirely separate from the aims of man, and entirely dependent on a natural process that acts without a conscious drive to do anything other than create. The team of scientists come to find out that their environment is deconstructing DNA at a cellular level in order to create new lifeforms, and that they are being unmade in the efforts to create new life. In both cases, Garland seems to utilize the myth of the great flood to explore these processes, while subtly pointing the finger, or at least directing our fear and animosity, at a creator rather than the creations.

Where Garland succeeds most among the weight of his mythic narratives is in his interest in human responses within a specific environment. All of the characters’ lengthy discussions of philosophical and scientific theory would mean nothing if they weren’t backed by personal stakes, the concrete feelings of love, loss and lust that stand out among the vastness of Garland’s science fiction arenas. The personal process of unmaking runs parallel across the arcs of the scientists in Annihilation, particularly Lena, and Caleb in Ex Machina. Through the designs of a higher power (the source at the lighthouse in Annihilation and Nathan in Ex Machina) they come to question their identities and their very humanity when forced to contrast themselves with a newly made being that offers both affection and animosity.

After his sessions with Ava, and her warning not to trust anything Nathan says, Caleb begins to suspect that he may be one of Nathan’s A.I.s as well. While Caleb’s concerns over that matter are quickly dispelled, he learns that Nathan selected him not because of his intelligence, or by chance, but because he’s a tool whose profile best suited his desire to test Ava’s humanity. This situation is mirrored in Annihilation with Lena being led to Area X, because her relationship to her husband and his own experience in Area X made her suitable for the job, while her psychology made her suitable for the needs of the environment and eventual alien contact. Both Caleb and Lena are self-destructive in their willingness to venture into the unknown, in Caleb’s willingness to fall in love with Ava, and Lena’s willingness to give herself over to grief, something we see the other scientists do as well, though with different, no less horrifying, results.

There’s a point midway through Annihilation where Jennifer Jason Leigh’s Dr. Ventress concludes that humans are coded for self-destruction. It’s an impulse, she says. Impulse is one of the primary aspects in Nathan’s creation of Ava’s brain, and it may in fact be the very thing that leads her to escape in the end, leaving Nathan and Caleb’s bodies behind in her wake. “Impulse. Response. Fluid. Imperfect. Patterned. Chaotic,” Nathan says of Ava’s brain. Similar words are used to describe the phenomena in Area X, with its mutations, duplications and reliance of humanity’s lack of control. Ultimately, Garland makes the line between machine and nature thin, suggesting that humanity’s misunderstanding of both is a result of being unable to understand itself. Humans are willing tools in their own destruction, and while there may be a higher force that guides them along that path, Garland’s Ex Machina and Annihilation suggest that human nature is the greatest unknown of all.

What Makes 'Annihilation' a Different Type of Female-Driven Movie