[This story contains spoilers for Annihilation]

More than a hundred years ago, philosopher and writer G. K. Chesterton wrote that the microscope was the only invention that ever made the world larger, and he’s still right. Everything from telescopes to trains to the internet has brought us closer to people and places and things that would have been otherwise distant and obscure. The microscope does something entirely different. It takes banal, ordinary things and reveals formerly invisible worlds all around us — a kaleidoscopic community held in a drop of pond water, a potential plague and a potential antibiotic sharing the same seemingly innocuous square inch of dirt. It is beautiful and terrifying and entirely unlike the ugly green “germ” slime seen in hand sanitizer commercials.

Science fiction loves the world of microbes and genes, and it loves depicting the scientists enamored by them. Their fascination is almost always hubristic, and they usually end up unleashing a plague or monster that goes on to terrorize humanity in their error. As a student of biology with a particular interest in life at the microscopic level — a cell-counter and not a squirrel-chaser, to paraphrase a professor I once had — I have been constantly frustrated by the failure of these narratives to address why an even vaguely sane human would see the allure of these fields of study.

Enter Alex Garland’s Annihilation, which stars Natalie Portman as a biologist, one of four women sent on an expedition into Area X, an ever-growing region being consumed by a mysterious phenomenon known as The Shimmer.

Looking at individual “facts,” Annihilation‘s science is often pretty far off base. From its depiction of what human cells look like under a microscope to its summarization of Hox genes — which biology students know are important in determining body plan along the anterior-posterior axis but hardly sufficient to provide a full blueprint for human-shaped topiaries — the film takes considerable creative liberties when it comes to biology.

But the film delivers elements that are intriguing to engage with from a biological perspective, such as its depiction of how The Shimmer might theoretically function, and how people would interact with it. It’s a departure from the usual sci-fi narrative, which leaves the biology student part of my brain in something of a stress-induced coma. 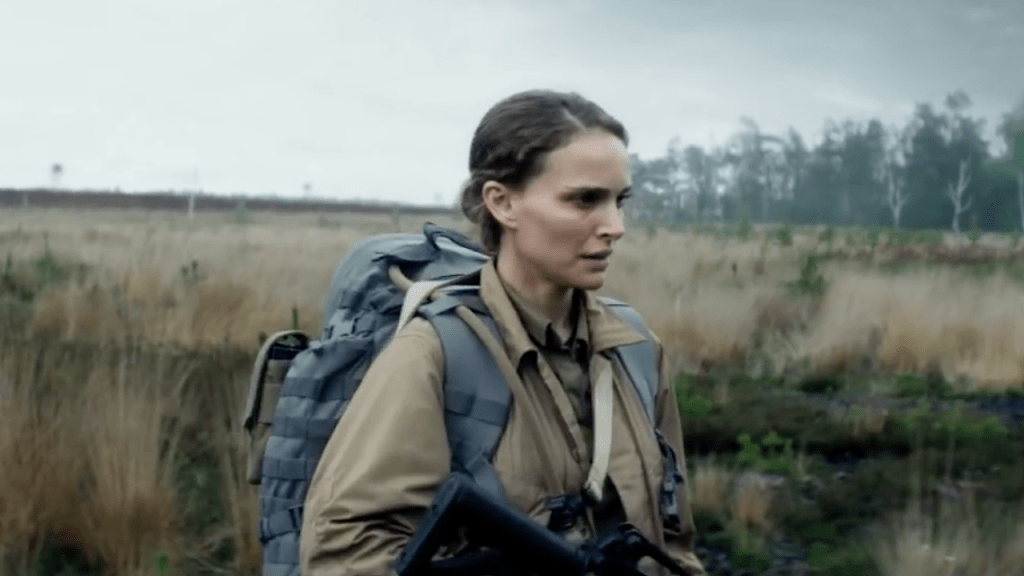 With the exception of a handful of instances of hypothesizing, Annihilation leaves the viewer to interpret its eerie, surreal visuals as they will. The Shimmer is clearly mutagenic, as demonstrated by the wonder-plants and super-alligator, and inspires a huge amount of destabilization on the molecular level — all of the mutations, also the moving skin, etc. — but the film wisely avoids lingering too much on the “how.” The Shimmer displays enough relative consistency — a certain degree of repetition in characteristics and patterns, which in turn often seem to have a fractal-like internal logic — to give the sense of there really being some universal underlying mechanism at work. An unknown, alien, potentially even unknowable mechanism, but a consistent mechanism nonetheless.

It both leaves room and gives reason for a biology nerd like me to speculate over whether, say, a hypothetical extraterrestrial mutagen might be able to mess with cells here on Earth in ways almost beyond imagining. Or whether or not some space microbe that evolved under entirely different conditions and perhaps from entirely different materials could engage in some drastic version of horizontal gene transfer (that is, a transfer of genetic material between unrelated individuals, even individuals of different species, instead of vertical parent-child gene transmission).

So often,sci-fi narratives involving extraterrestrial life feature aliens that are sentient, highly intelligent beings. This is, of course, an intriguing and also terrifying concept from a storytelling angle, but, as Annihilation so beautifully demonstrates, there is so much more to explore. I am not claiming to know what exactly what The Shimmer is or what every little detail of the film means. One of the best and worst things about science is that it actually cannot solve all the mysteries of the universe. It is a method that can only be applied to specific inquires investigating falsifiable, empirically measurable claims. Metaphysics is a completely separate creature that it is not equipped to battle.

I personally interpreted The Shimmer as being some kind of extraterrestrial entity not unlike a virus, something in a nebulous region between living and non-living but with a huge potential to fundamentally alter the functions of various other living things. One of the most fascinating and frightening aspects of the microscopic world — the world of individual cells and viruses and genes — is that the question of intent does not apply. Ebola is a terrifying disease, yet an Ebola virus is not a villain in the traditional sense. It has no master plan, no evil plot to kill the world, no consciousness at all. It simply is and does while humans scramble to outmaneuver a thing that doesn’t even have a brain, and yet, in a certain sense, is somehow so much smarter than us. It’s terrible and fascinating, a particular push-pull of attraction and repulsion. Such a thing has endless dramatic potential, yet I have rarely encountered a narrative that has managed to replicate this particular brand of feeling, and certainly never before seen a film that mimics it half so well as Annihilation. But perhaps this argument could benefit from an example.

In a developmental biology class I took as a college sophomore, we replicated a classic study investigating eye development. We bred mutant fruit flies that expressed the eye development gene called eyeless — a gene with a human equivalent known as PAX6 — all over their bodies. When we observed our mutants under a microscope once they hatched, we saw that they had developed little eyes everywhere — where their legs would normally grow, where their wings sprouted. I will never forget the feeling of looking at those mutant flies. I was fascinated. I was repulsed. I had done that. I had made a tiny monster, like all the evil scientists in the movies.

Only, I didn’t feel god-like, or even especially powerful, the way that all those stories love to warn against. On the contrary, I actually felt incredibly small. A variant of the system I had interfered with was at work in my body too. While the scientific library of what we know and understand is larger than ever and grows larger every day, it will never compete with the infinite enormity of what we do not know, not to mention what we cannot know scientifically because said knowledge exists outside the bounds of what the scientific method can investigate. It was the enormity of everything I didn’t know and would never know that was especially salient to me in that moment.

Nearly every new answer science gives brings a host of new questions. Sometimes multiple answers that all seem equally valid don’t add up to a picture that seems to make any sense. Dogmas are repeatedly established, revised, broken, and replaced. Being on the cutting edge of scientific understanding is not collecting an ever-growing pool of facts and figures, it’s an expansion of knowledge that’s mixed with constantly revising, un-learning, re-learning, re-organizing, and re-interpreting what you formerly thought you knew. At the heart of good science is a vein of self-destruction. From Charles Darwin to cloning pioneer John Gurdon, many of what we now consider the great breakthroughs in scientific understanding pushed science forward by destroying what was previously accepted as truth.

On one hand, the scientific method requires accepting the results of research that has come before in order to make progress possible. On the other, good science means questioning everything, doubting everything, being fully willing to change your convictions when contrary evidence is presented, even if it requires rethinking everything you thought you knew or having to write off years of work as a loss. It’s a constant struggle.

In Annihilation, writer/director Garland presents one of the best meditations I have ever seen on the metaphysics of scientific inquiry — about the fundamental nature of science that, ironically, cannot in itself be investigated through the scientific method. It’s not a warning about science hubristically “playing god” or a cinematic slap on the wrist about the dangers of pursuing knowledge. It’s not blindly espousing the joys of scientific progress without acknowledging its shortcomings or inherent risks. And no, it’s not scientifically accurate by any means. But what the film does have is far more valuable.

Annihilation gets at the heart of what compels the pursuit of scientific knowledge. It captures the push-pull of fascination and repulsion that science, and the study of biology in particular, so often inspires, and it does so better than any film this student of both biology and cinema has ever seen. It lays bare the beauty and the horror, and most importantly, it makes no judgment.

Watch it and decide for yourself.

Ciara Wardlow is a Wellesley College student double majoring in Cinema and Media Studies as well as Biological Sciences.

'Annihilation' and 'Ex Machina' Are a Double Feature in the Making