[This story contains spoilers for Ant-Man and the Wasp]

Ant-Man and the Wasp had plenty of moments that director Peyton Reed and star Paul Rudd knew would be a challenge, but one in particular stands out.

The sequel centers on Hank Pym (Michael Douglas) and Hope van Dyne’s (Evangeline Lilly) search for wife and mother Janet van Dyne (Michelle Pfeiffer), who has been lost in the Quantum Realm for 30 years. Fortunately, after the events of 2015’s Ant-Man, Janet and Scott Lang (Paul Rudd) have a connection that allows her to send a message to her family.

But how do you show that onscreen?

For a key scene in which Scott channels Pfeiffer’s Janet, Reed and Rudd took inspiration from 1984’s All of Me, in which Lily Tomlin inhabits Steve Martin’s body.

“I think it made some people nervous, because it’s a big swing, but it felt like this is our movie,” Reed tells Heat Vision of the moment that’s both funny and sweet. “This is right dead-center bull’s-eye the tone of our movie and that is really all attributable to Paul and his performance.”

When Janet finally does return from the Quantum Realm, she’s evolved in ways not yet apparent. She also comes back with 30 years of stories that potentially could be explored in a third Ant-Man movie. Reed notes that in the comics, the Microverse (the inspiration for the Quantum Realm), features actual civilizations and was infinite in scope.

“We knew going into this that there’s a lot of opportunity to be mined. We know enough about Janet van Dyne to know she not only survived down there, but it’s safe to assume she thrived in various ways down there,” says Reed. “As we say in the movie, she’s also evolved. We wanted to get enough to just sort of pique audience’s curiosity about it and hopefully at some point we will be able to show the audiences some of the things we’ve been talking about and ruminating about.”

The film has earned $283 million worldwide since opening July 6, and not only sets up both Avengers 4 thanks to a post-credits scene that sees most of our heroes disappear, but also lays the groundwork for a third Ant-Man movie that Reed says could have a bigger role for Ava/Ghost (Hannah John-Kamen) and Bill Foster (Laurence Fishburne).

Read the full interview below.

Paul channeling Michelle Pfeiffer is a standout moment. How did you balance the level of affection Scott (as Janet) showed Hank Pym, considering the two men’s prickly relationship? Did you consider there being a little kiss between them?

We talked early on about, “Do we get Michelle to come in and perform the scene and then have Paul mimic that scene?” We felt like, “I don’t know if that’s necessary and we’re already doing this Louis truth-serum thing where we’re putting his voice in other people’s mouths. This needs to be just [a] pure Paul performance.” Paul is familiar enough with Michelle, he’s worked with her and we all know her movies and he just sort of did his thing. … When Michael Douglas of all people and looks at Paul and says “Janet?” You know [the audience] is buying the conceit. People are laughing, but it’s weirdly touching, because it is the reunion, but it’s not the reunion. And it just went from there.

From there we talked about how far we push it in terms of the intimacy between surrogate Janet and Hank. Where we ended up felt right to us. It felt like the right amount and it wasn’t going to get too broad and too nuts. It’s something that I’m really happy we did in the movie.

There are two shots that stood out to me. One was the first shot of Hank in a quantum suit after all those years, and then the first shot of Janet and Hank together. Outside of Logan or the original X-Men movies, you don’t really see older heroes. What was setting that up like?

I like that the Ant-Man movies tell this generational hero’s story. It’s one of the things that makes them different from some of the other MCU movies, because Hank Pym is the mentor character. In the first movie, it was fun to take Hank Pym and retroactively place him into the Marvel Cinematic Universe — and this time around to show them in the past and in the present day. One of the things that I promised Michael Douglas after the first movie was, “We’re going to give you some more jokes this time around.” And also the vibe between Hank and Hope is such a different vibe in this movie than the first movie, because obviously they’ve reconciled. It’s fun to see them as father and daughter, these super scientists, these superheroes.

I also said, “I want to figure out a way to give you more action in this movie.” That really was a thrill. When he puts on this quantum suit and there’s a complication in the plan and Hank is going to be the one who is going down, that felt really fun and good. It just felt right to me.

One of the most touching moments is Hope and Janet reuniting. What do you do in scenes like that to help your actors do their jobs?

My thing is to get all the technical stuff set and get the camera moves down and get my end of things absolutely ready to go, because I want to catch as much spontaneity in that moment as possible, because you know you have two exceptional actors. Evangeline is someone who is immensely prepared and it doesn’t hurt to have Evangeline’s real-life feelings about Michelle Pfeiffer. This is someone she has idolized for a long time and means a lot to her and is incredibly talented and it weirdly fed into the Hope-Janet dynamic. In this movie, Hope finally gets the suit and becomes a hero and the obvious person who would be a role model for her is not around and hasn’t been around for 30 years and so this is obviously the most emotional freighted moment in Hope van Dyne’s life.

My thing was just make sure the camera is in the right position, let’s get this move down and practice it and rehearse it and then when they come in, just on my end not let them down and let them do their thing. 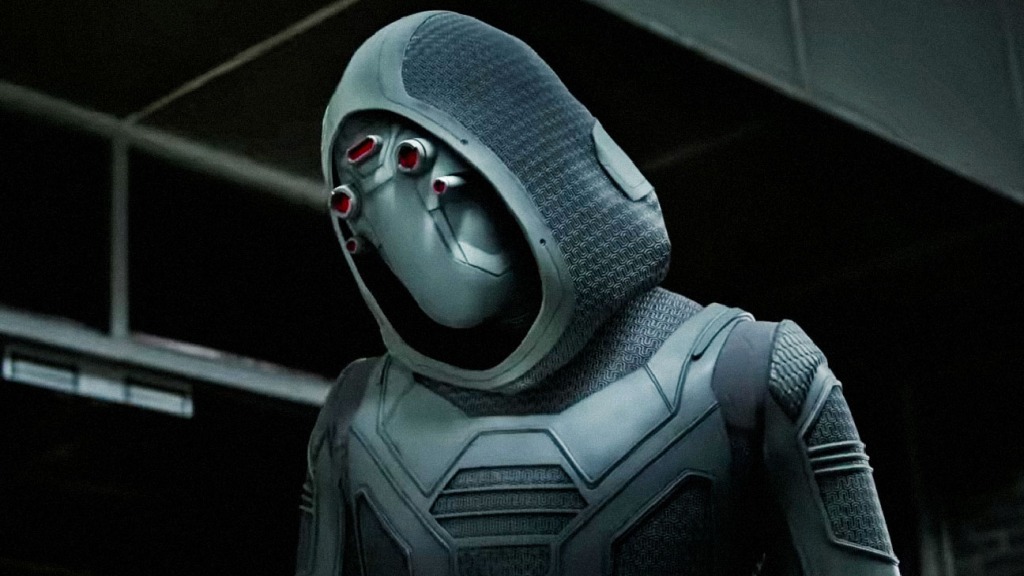 I never would have predicted this, but there are now enough Ant-Man-themed characters in the MCU to form their own team, if you add Ava, Bill Foster, Janet and maybe even Scott’s daughter, Cassie, into the mix. It seems like Ava and Bill in particular have a story that needs to be told.

Where in your process did the midcredits/Infinity War scene come into play?

It was something we talked about from the very beginning. We knew the ending of Infinity War and we knew we were coming out after Infinity War but we really knew our present-tense story was more concerned with the fallout of Scott’s actions in Civil War. We kept talking about ideas as we developed the script about how we are going to seed in the events of Infinity War. We had a lot of ideas and none of them appealed to us. Once you seed that in, it’s hard for that not to become the story. When we landed on the structure we ended up doing for the movie, it just felt right to us. It felt like the very specific Ant-Man and the Wasp way to deal with the events of Infinity War and we liked the idea of maintaining our tone, and actually wrapping up our story, everybody’s story. Scott getting off house arrest and his company, X-Con, taking off and he’s reunited with Cassie and Hank and Janet together. Tying up everything in a too-neat bow and then rolling the main credits and then hitting the audience in the gut with our movie’s version of what happens with Infinity War. That felt right to us. 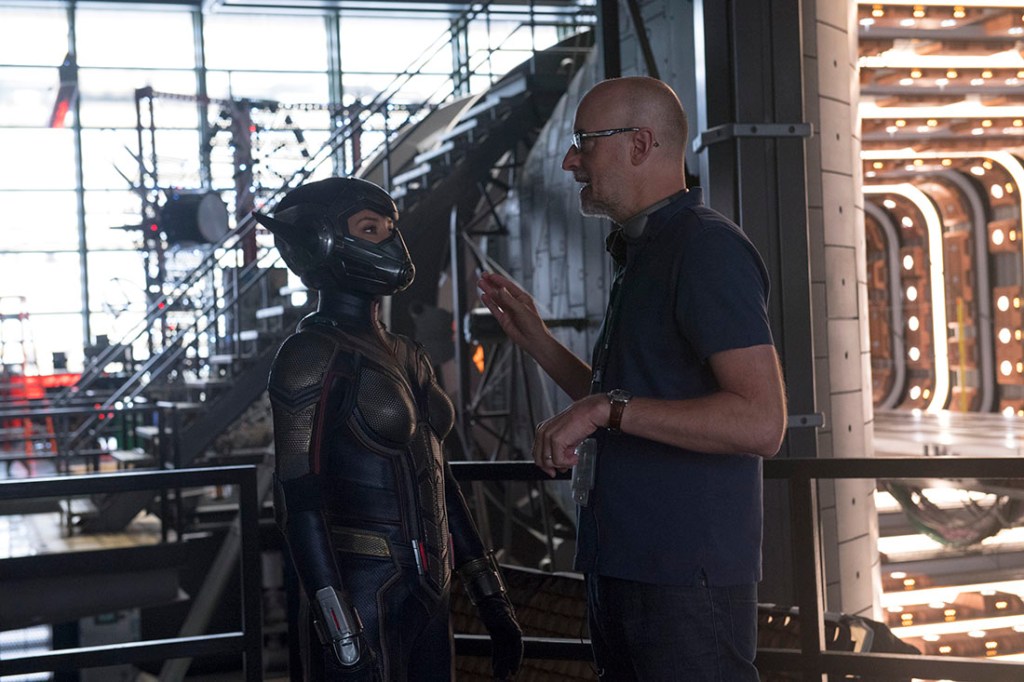 Fans who follow this closely know Evangeline is in Avengers 4, so even those who thought Ant-Man and the Wasp might end this way likely didn’t predict she’d disappear.

Good, that makes me happy to hear that. In that last scene we shot, we throw a lot at the audience all at once. It’s like, “Wow, there’s Janet van Dyne in street clothes. That’s cool and she’s with Hank. And they are on the roof. And what’s Louis’ van doing there? And there’s a quantum tunnel?” So, you are thinking about all of those elements in that scene and maybe not thinking so much about what’s going to happen.

Was there anything that plays differently than you expected now that you’ve seen it with an audience?

It’s always interesting, particularly with a comedy, to see, even in one screening, who laughs at one thing and who doesn’t. And who laughs at another thing. They are very different types of laughter in the movie, and I think it’s because you have Paul Rudd’s very specific sense of humor and a lot of times it’s really based around weird, arcane references, or is a laugh that plays the comedy of awkwardness and goes on too long. Then you have Michael Pena’s style of humor. And then you have the visual comedy. The shrinking and the growing and in this case Scott’s malfunctioning suit and the weird visuals and stuff like that. It’s always fun to see how different members of an audience respond to the different comedy and I think weirdly the comedy is as generational as the characters in the movie. There’s stuff that younger kids respond to and there’s stuff that older audience members respond to. So I like that about the movie.

For more from Reed, read this conversation in which he answers more questions about his Marvel future.