It is, once again, the end of the world as we know it in AHOY Comics’ Ash & Thorn — except that the only thing standing between humanity and supernatural apocalypse are two older women who’d rather be taking it easy and baking pie, all things considered. To mark the release of the collected edition of the acclaimed series, The Hollywood Reporter has an extended preview, as well as comments from the creative team.

The series’ title refers to its leads: Lottie Thorn, the reluctant would-be savior of the world, and her trainer, Lady Peruvia Ashlington-Voss. Both are far from the traditional heroes the audience expects from such stories because, not to put too fine a point on it, they’re septuagenarians — and they’re really too tired for this kind of nonsense.

According to editor Sarah Litt, the series “is the perfect fit for AHOY. It’s quirky. It’s funny.” It’s also, as she revealed, something that shares DNA with other AHOY titles. “Similar to Second Coming, it shows what you can do when you believe in yourself. Much the same as The Wrong Earth, Ash & Thorn pushes the envelope for what makes a hero. And just like Billionaire Island, it’s got a lot of monsters out to destroy the world — only these monsters are a little more subtle. It’s everything AHOY stands for.”

“The Chosen One trope is always fun to play with and we never seem to get tired of it. Except that it seems to feature similar protagonists and themes and I wanted to upend that expectation,” writer Mariah McCourt told THR. “Getting to write older characters is one of my favorite things and juxtaposing ‘mundane’ things like baking with monsters, the end of the world, and what it means to be truly ‘heroic’ is a lot of fun.” (McCourt talked to THR in depth about the series when it debuted in June.)

“We rarely see older main characters, especially women, being represented,” added artist Soo Lee. “It’s an interesting twist not only for the age but because they also have more life experience and a lot less threshold for nonsense!”

“A true hero can kick ass as well as bake a mean pastry,” joked cover artist Jill Thompson, who said that Ash & Thorn “kind of combines two of my passions, protecting our world and entertaining with beautiful and delicious things.”

“One of the most brilliant elements of the story is the way it balances the reader on the edge between the opposites of dark horror and lighter, quieter moments,” explained series colorist Pippa Bowland. “The opening battle is colored using a sunset-inspired palette to suggest this tension of light and dark from the outset — when soft, warm daylight is just leaving us for its more threatening and colder opposite, night. Later on, the pinks inside Lottie’s house are deliberately soft and domestic to create even more of a stark contrast with the darker, colder blue-green shadow tones which suggest danger and Lovecraftian monsters lurking just around the corner.”

The collected edition of Ash & Thorn is available digitally and in print now. For those needing a sample before deciding to commit to the book, read on for the first issue of Ash & Thorn. 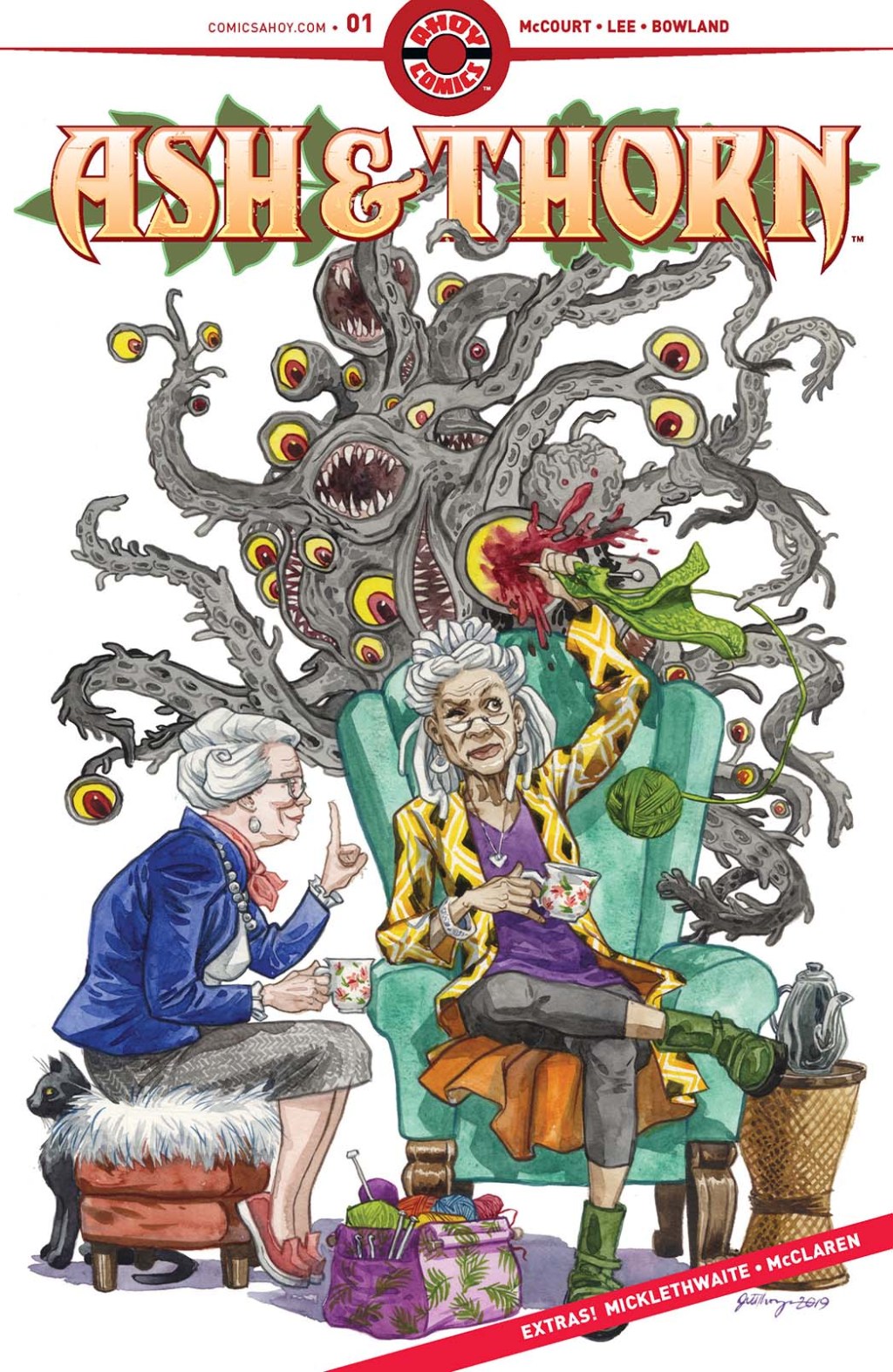 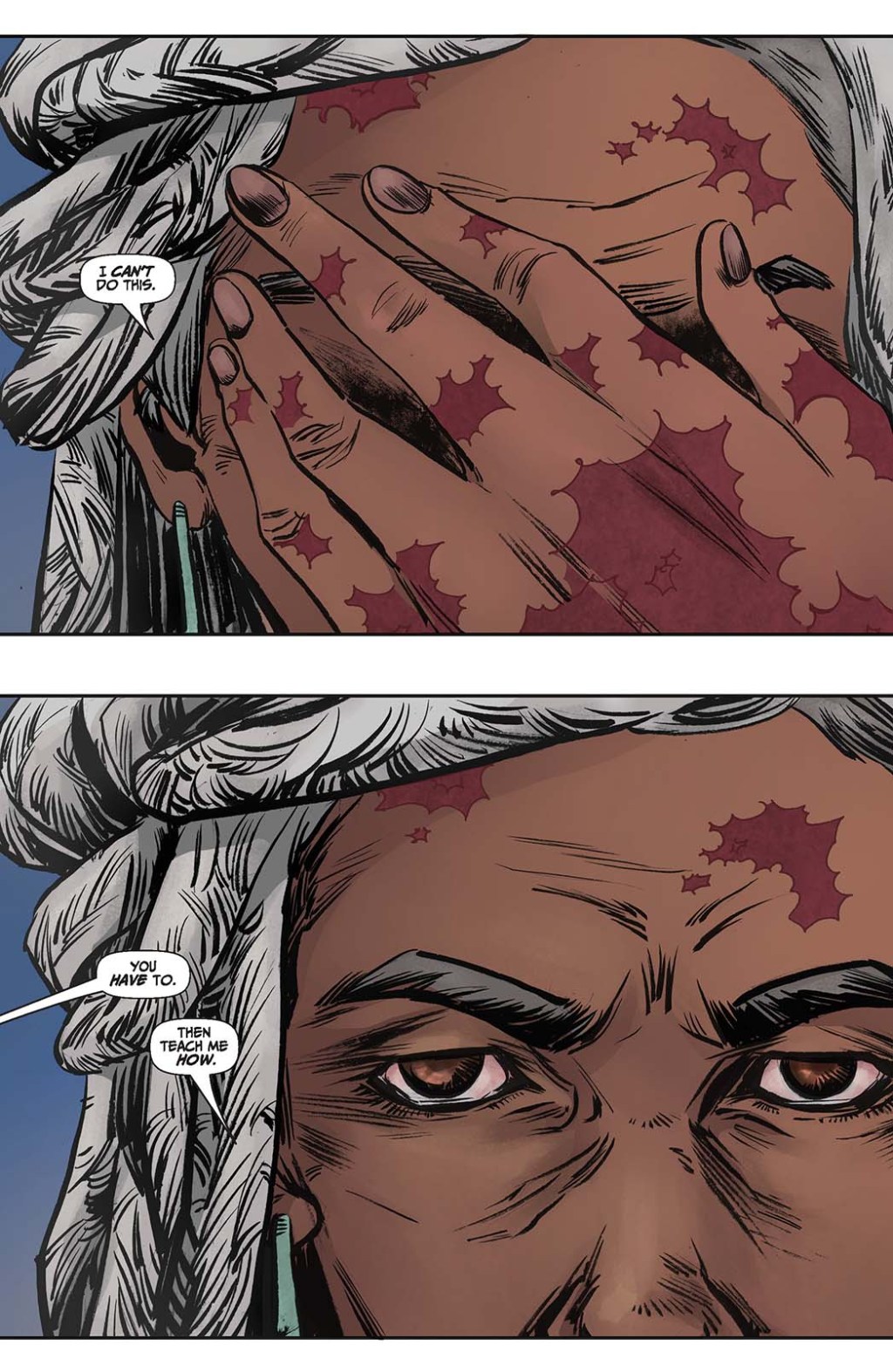 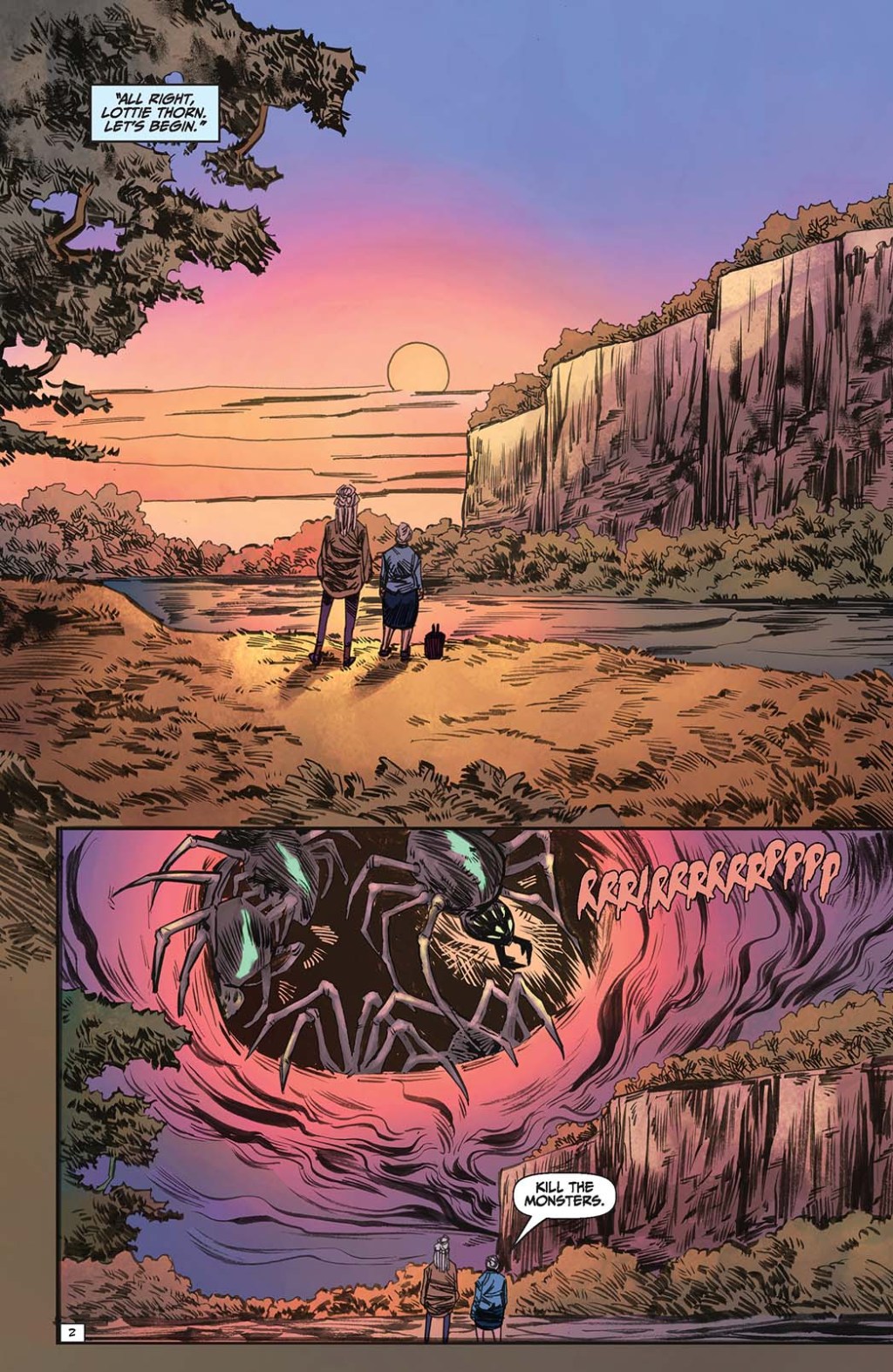 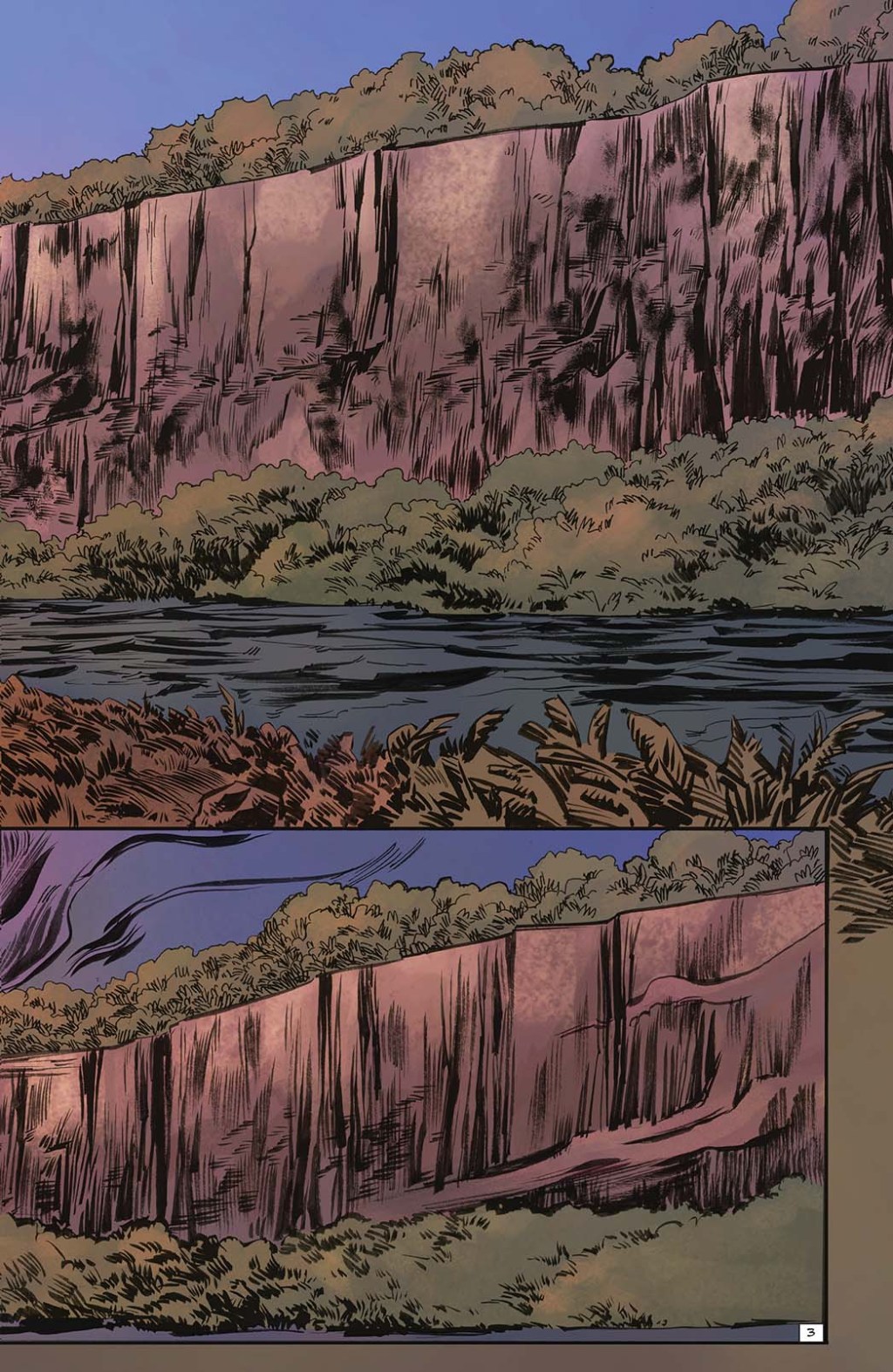 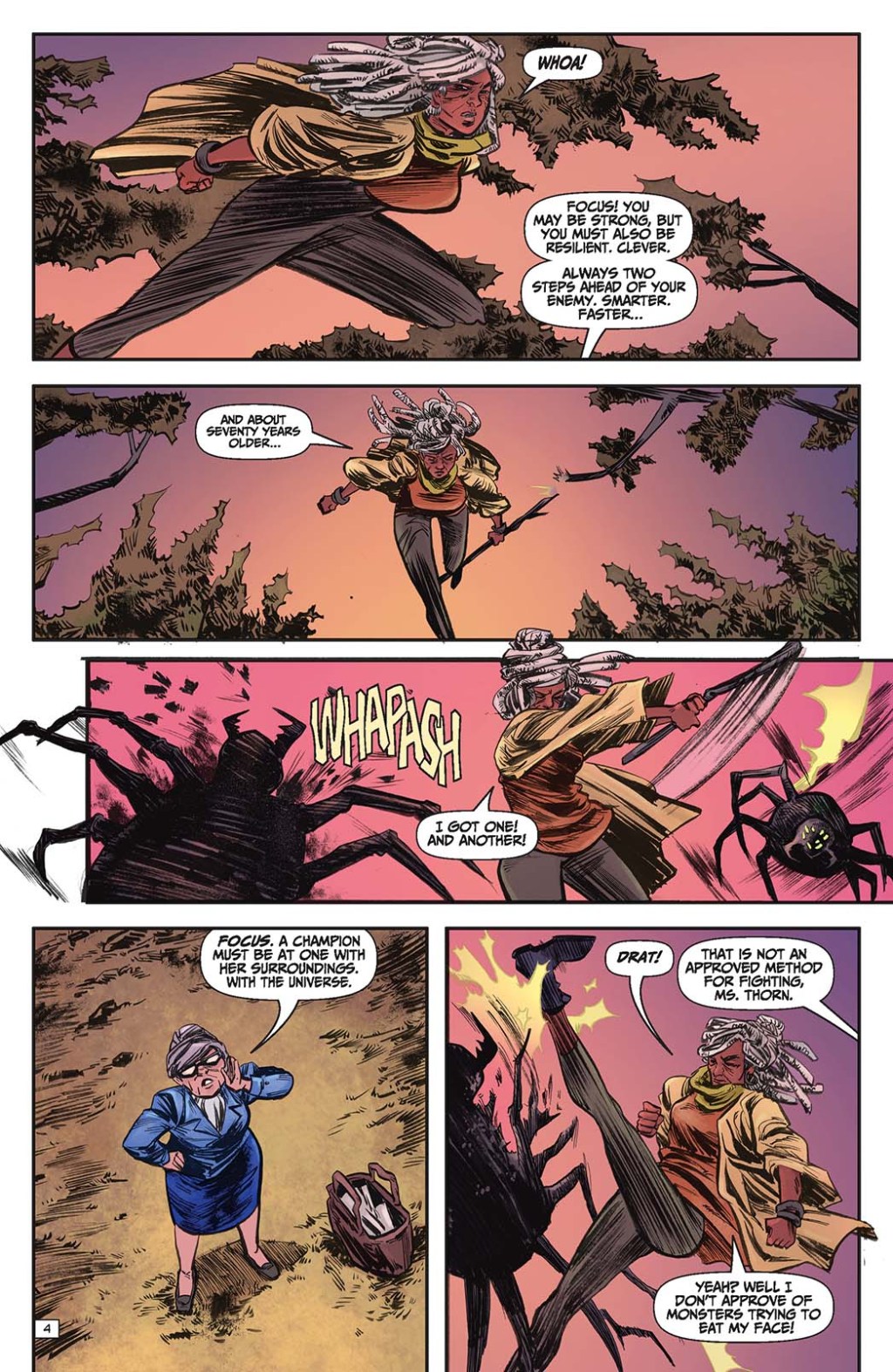 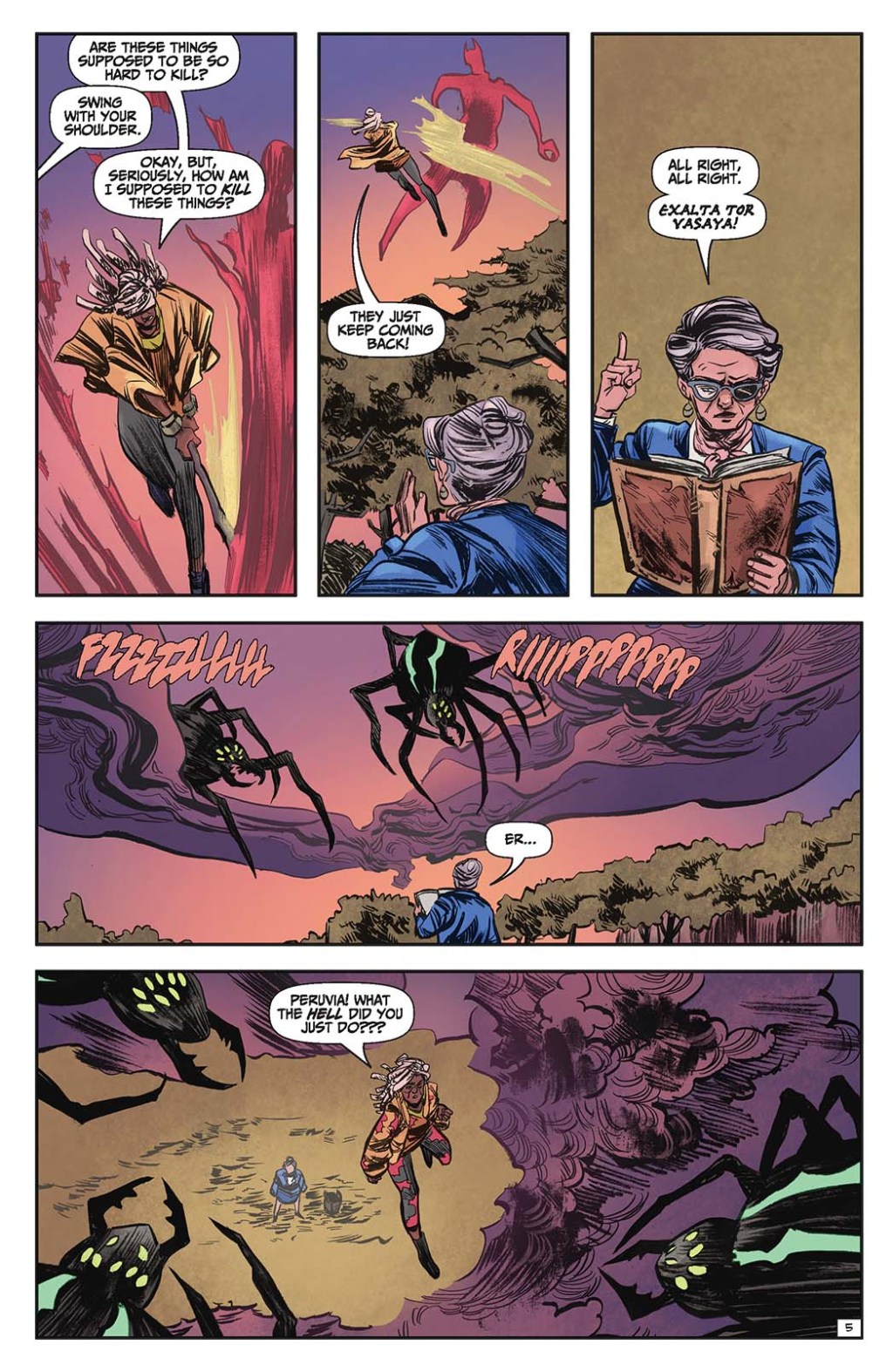 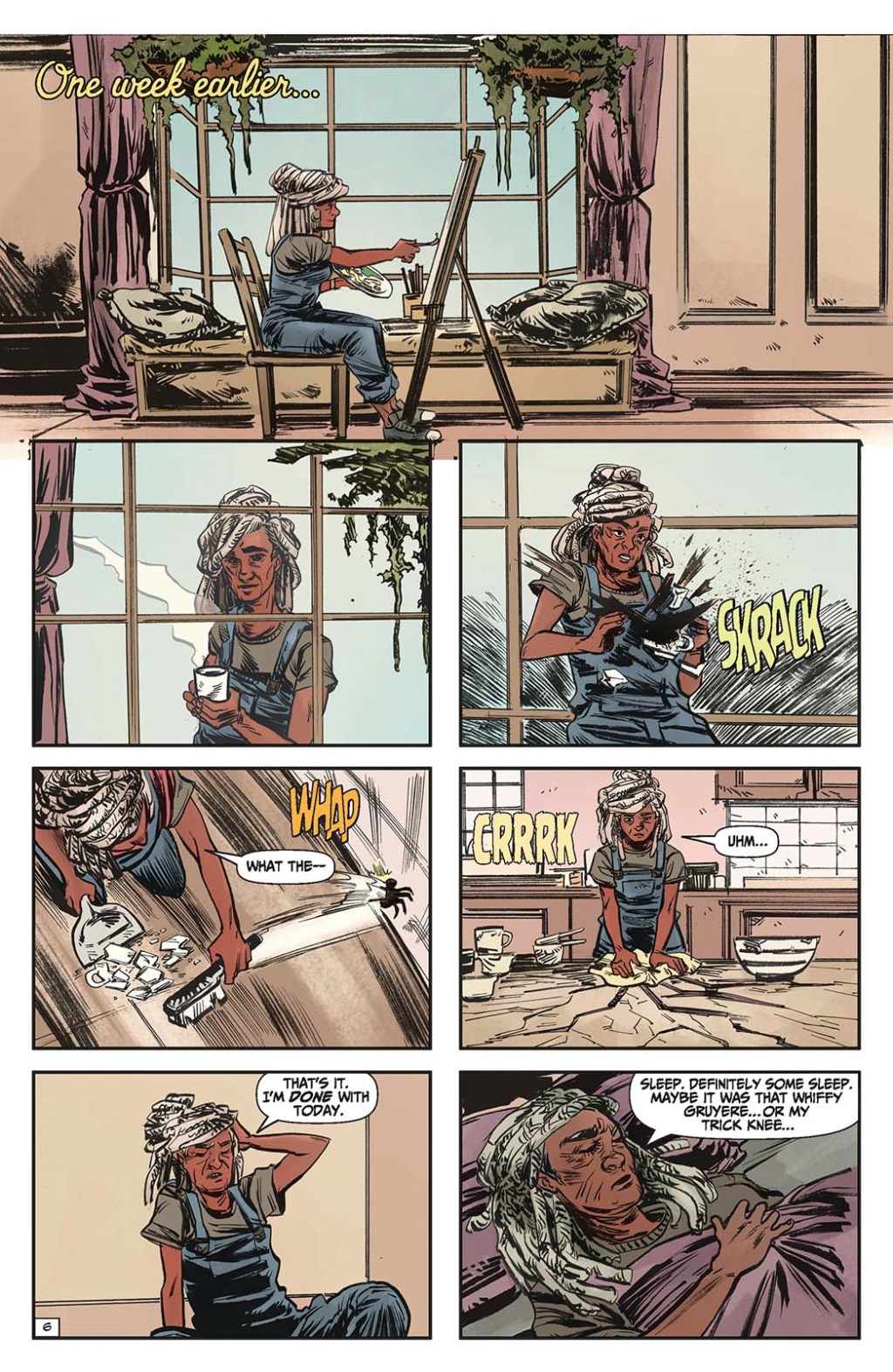 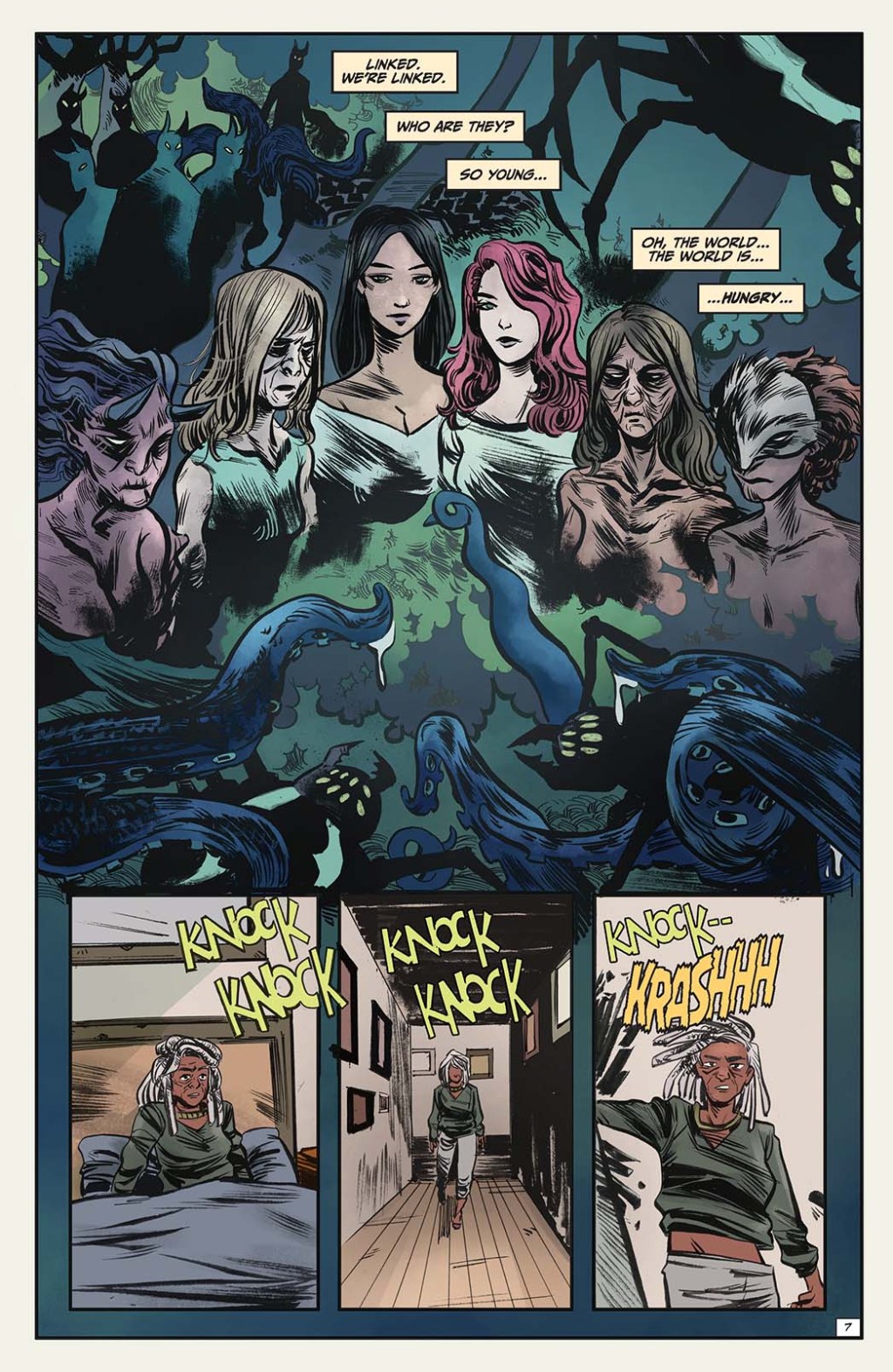 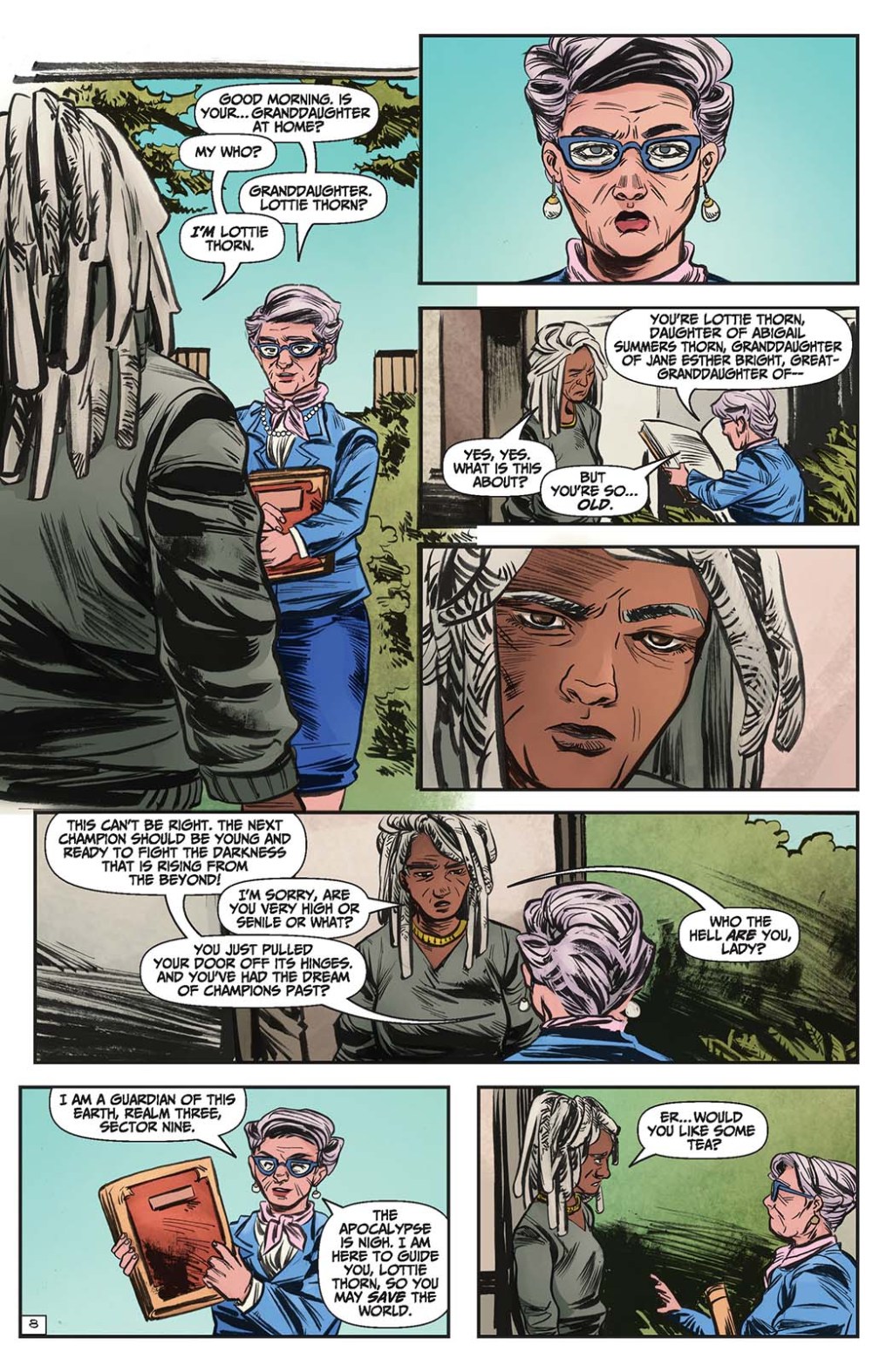 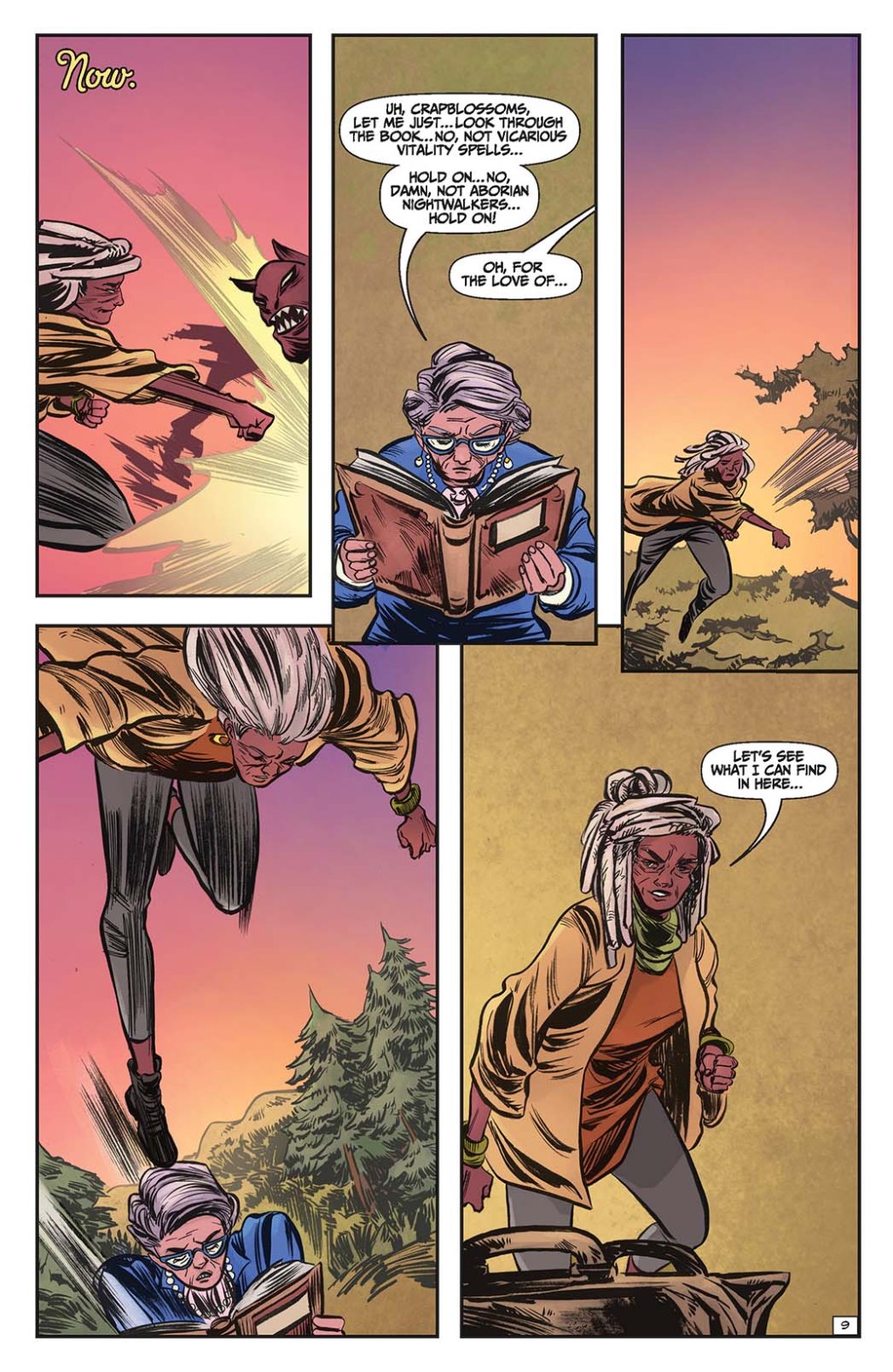 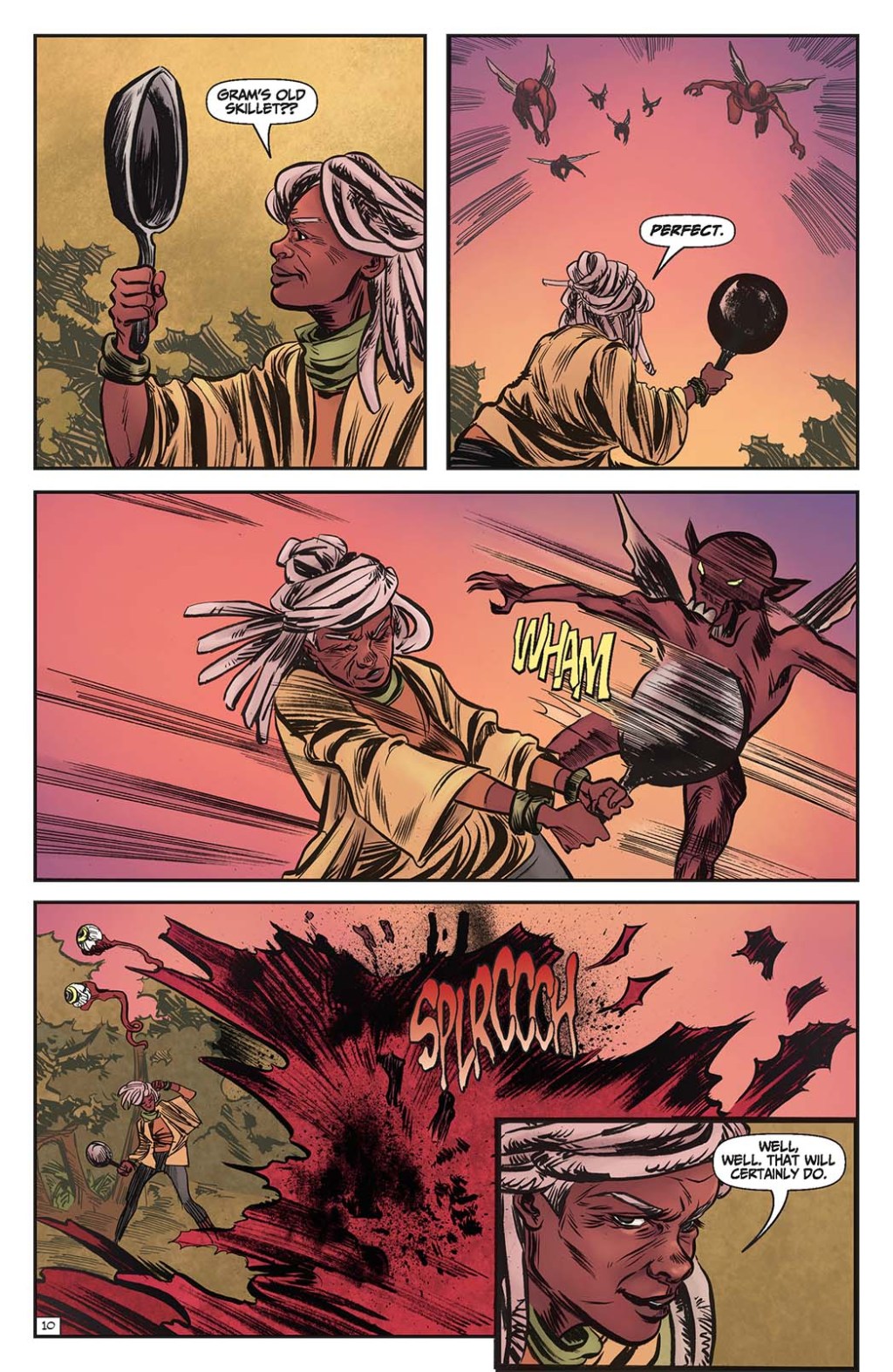 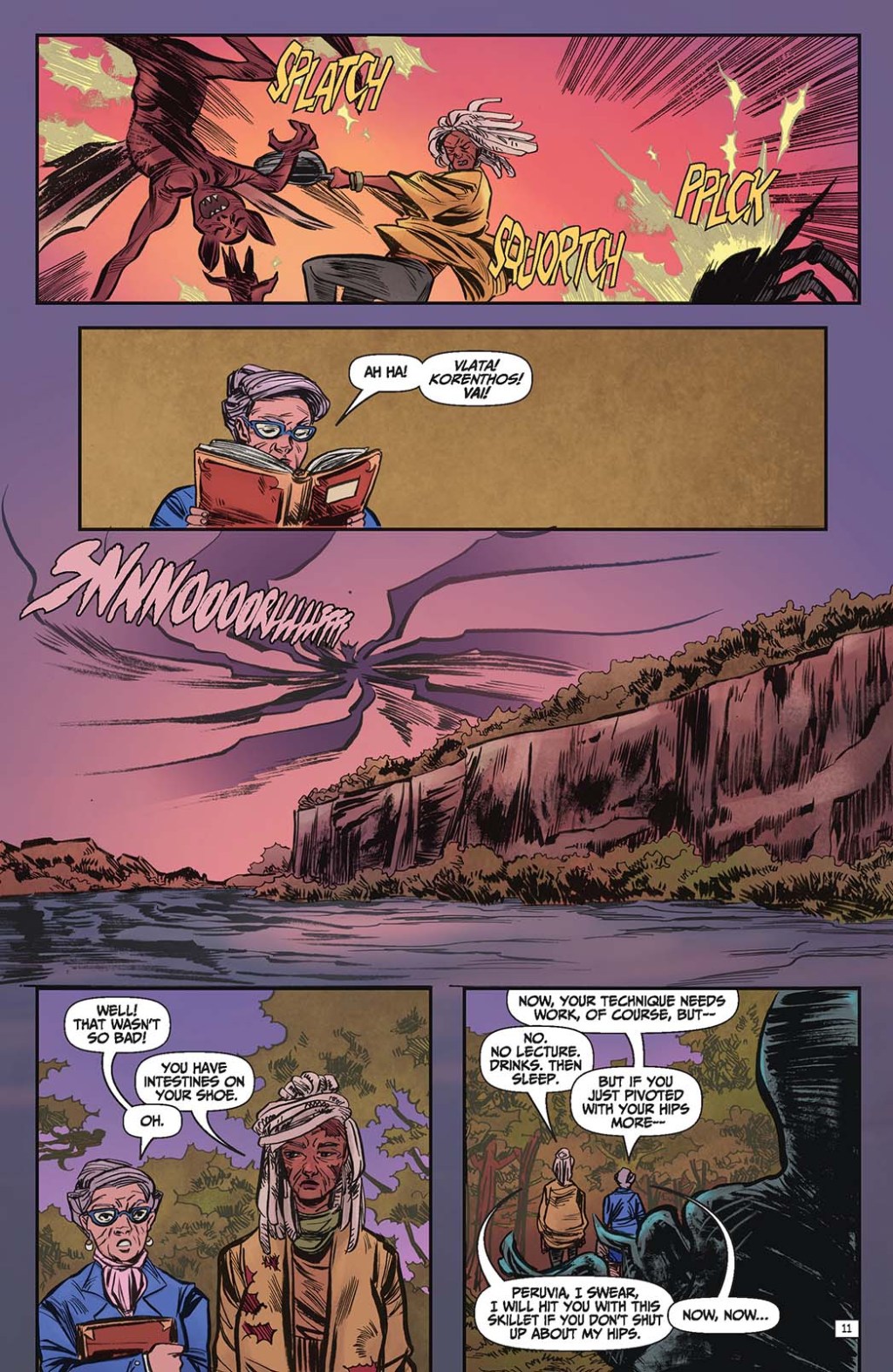 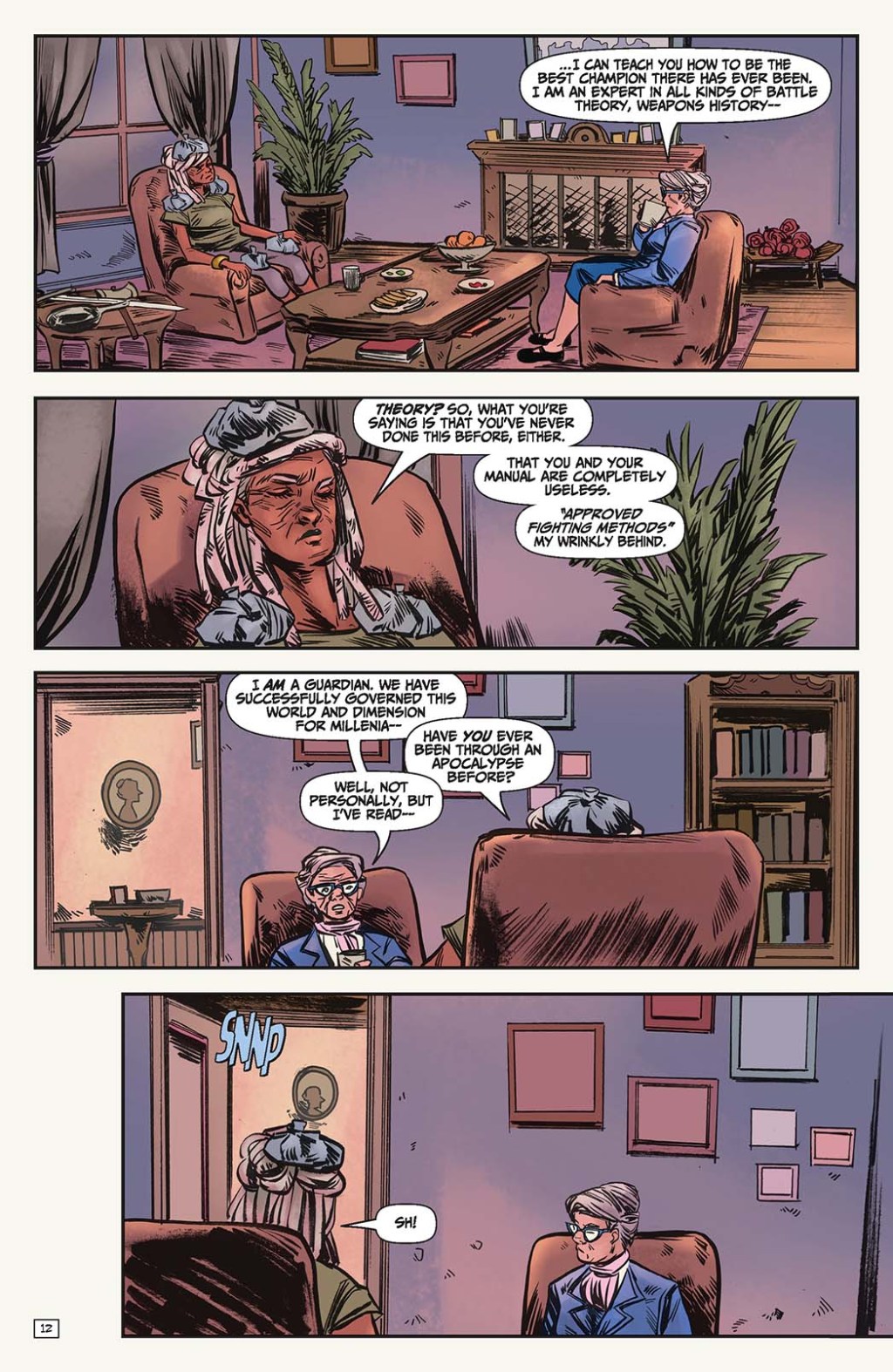 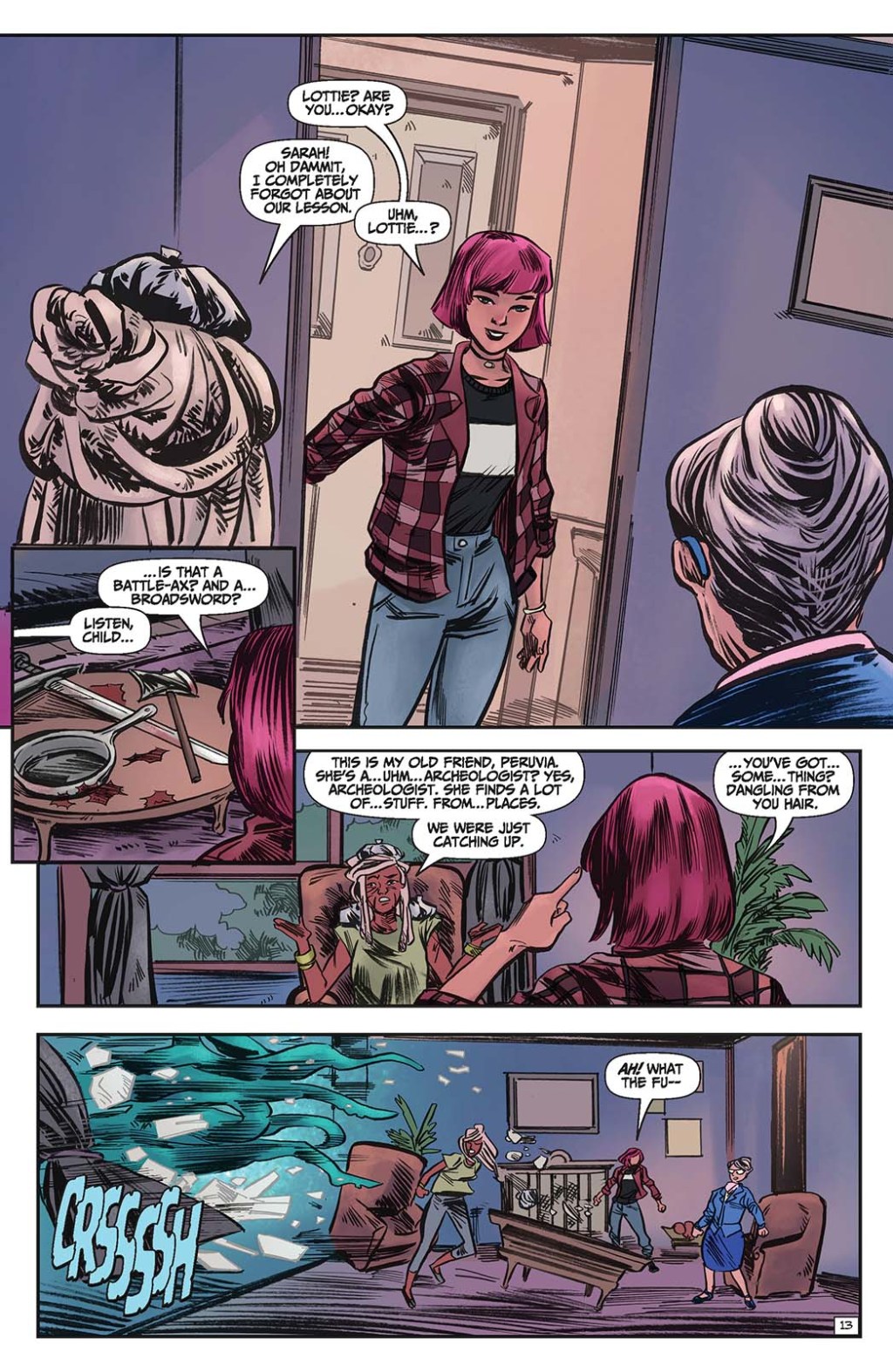 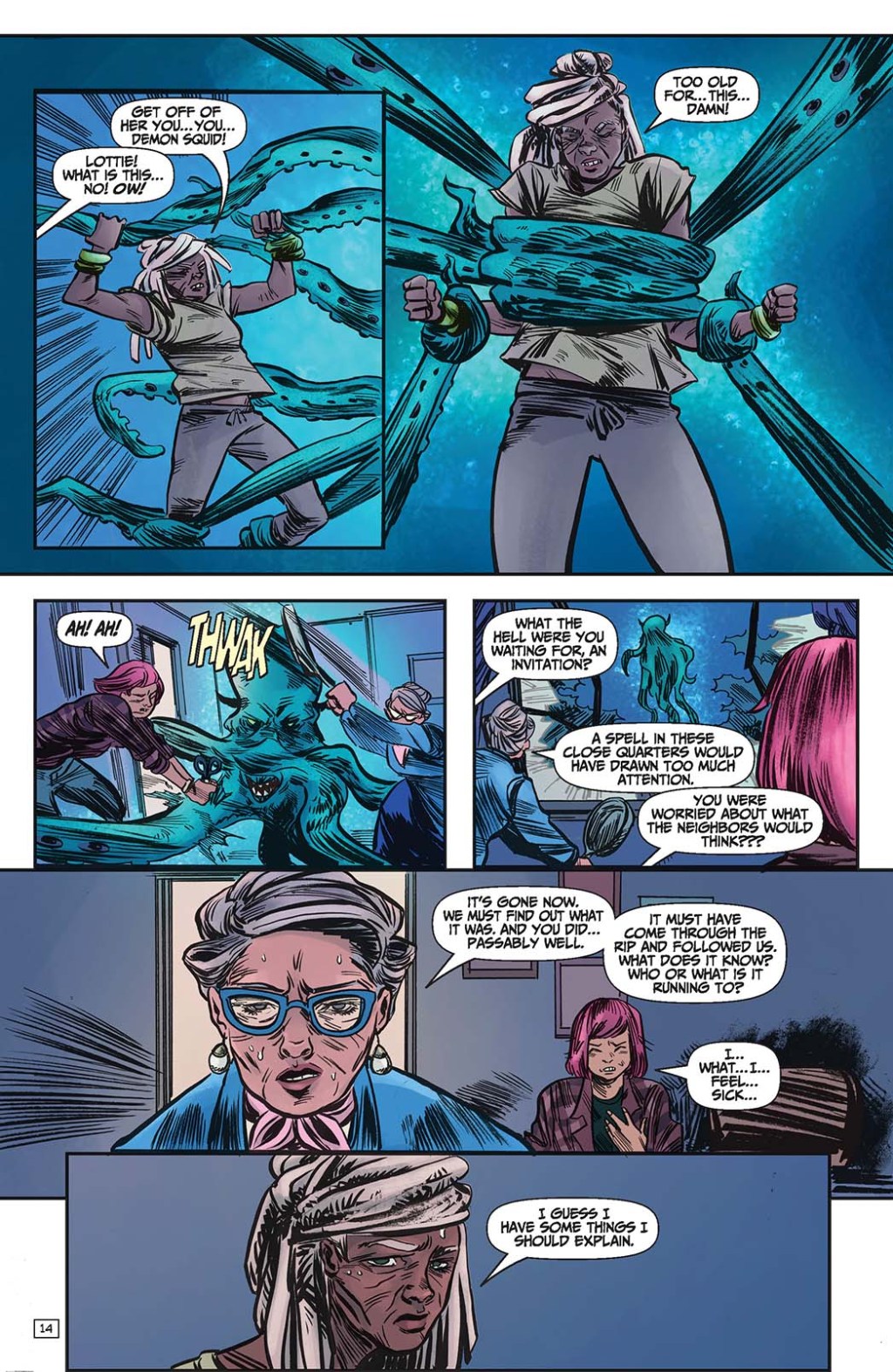 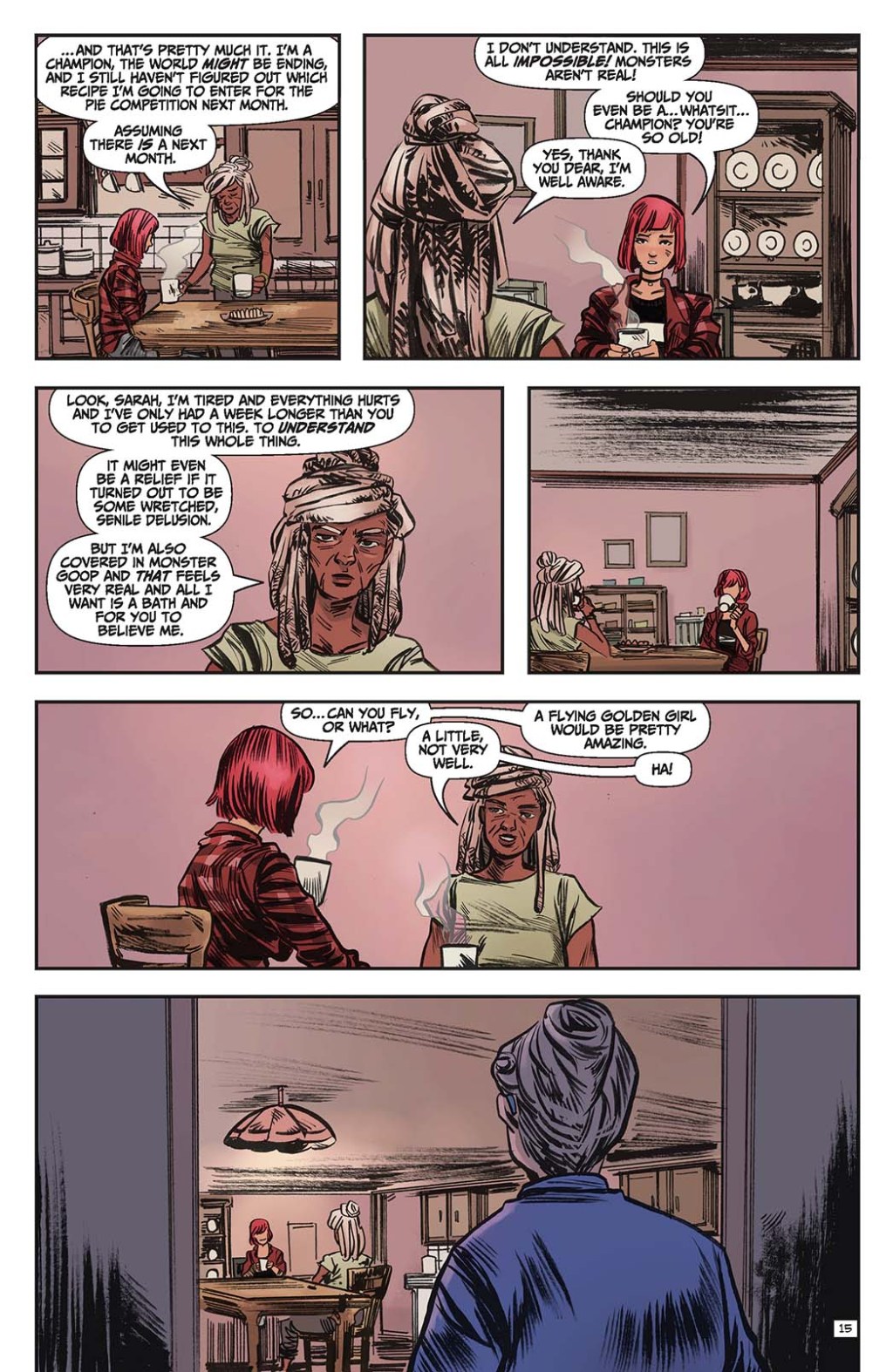 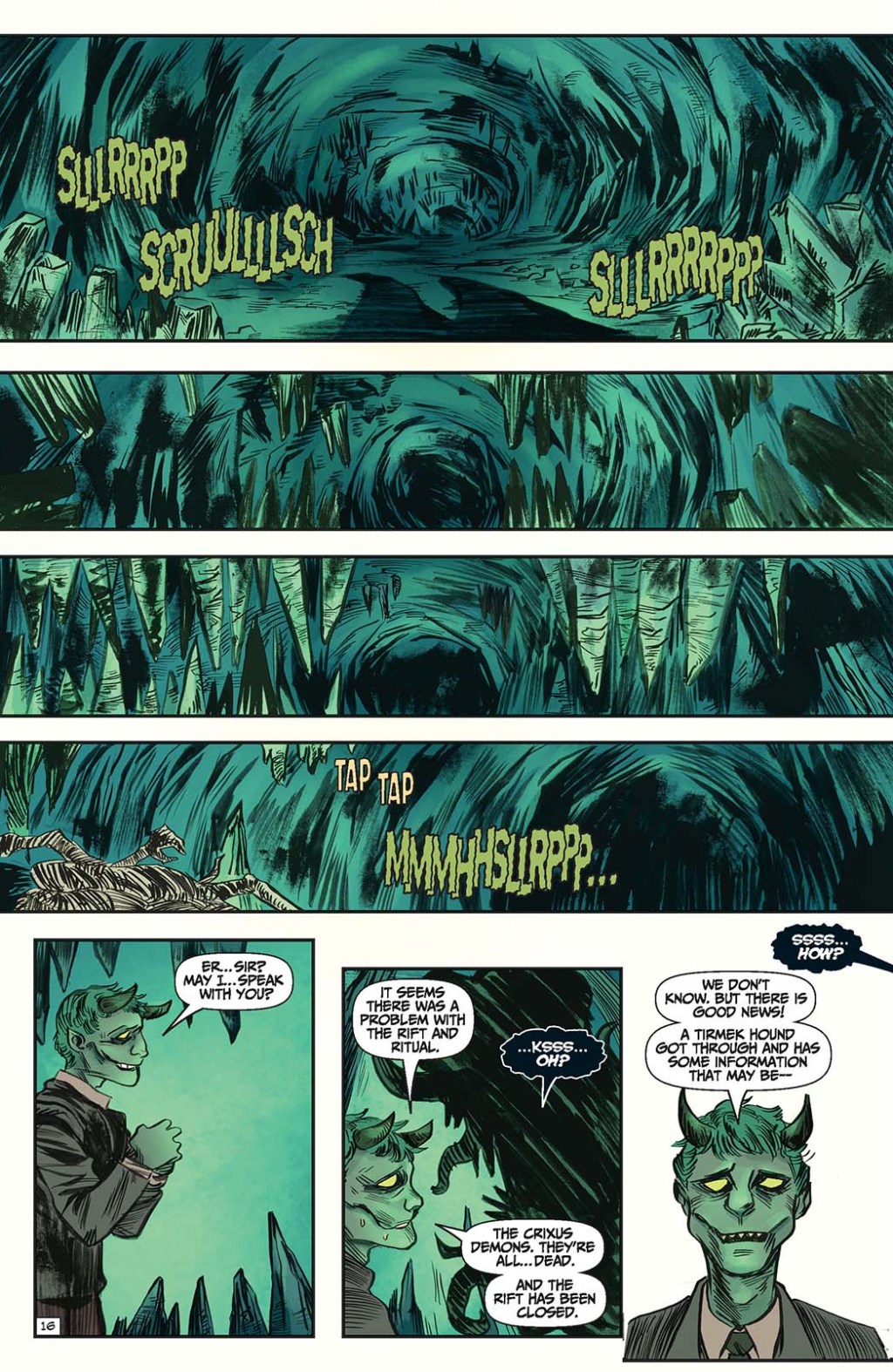 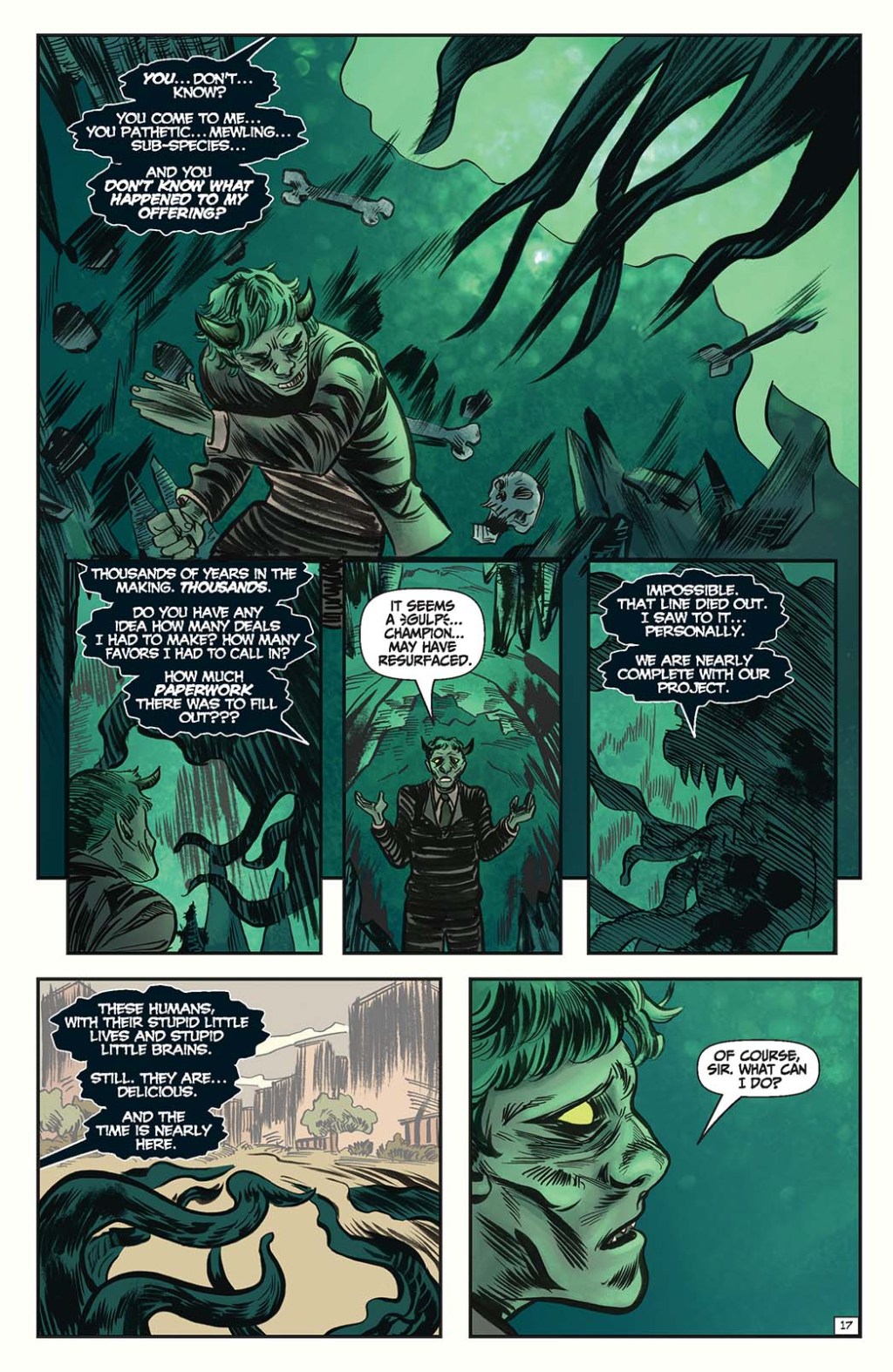 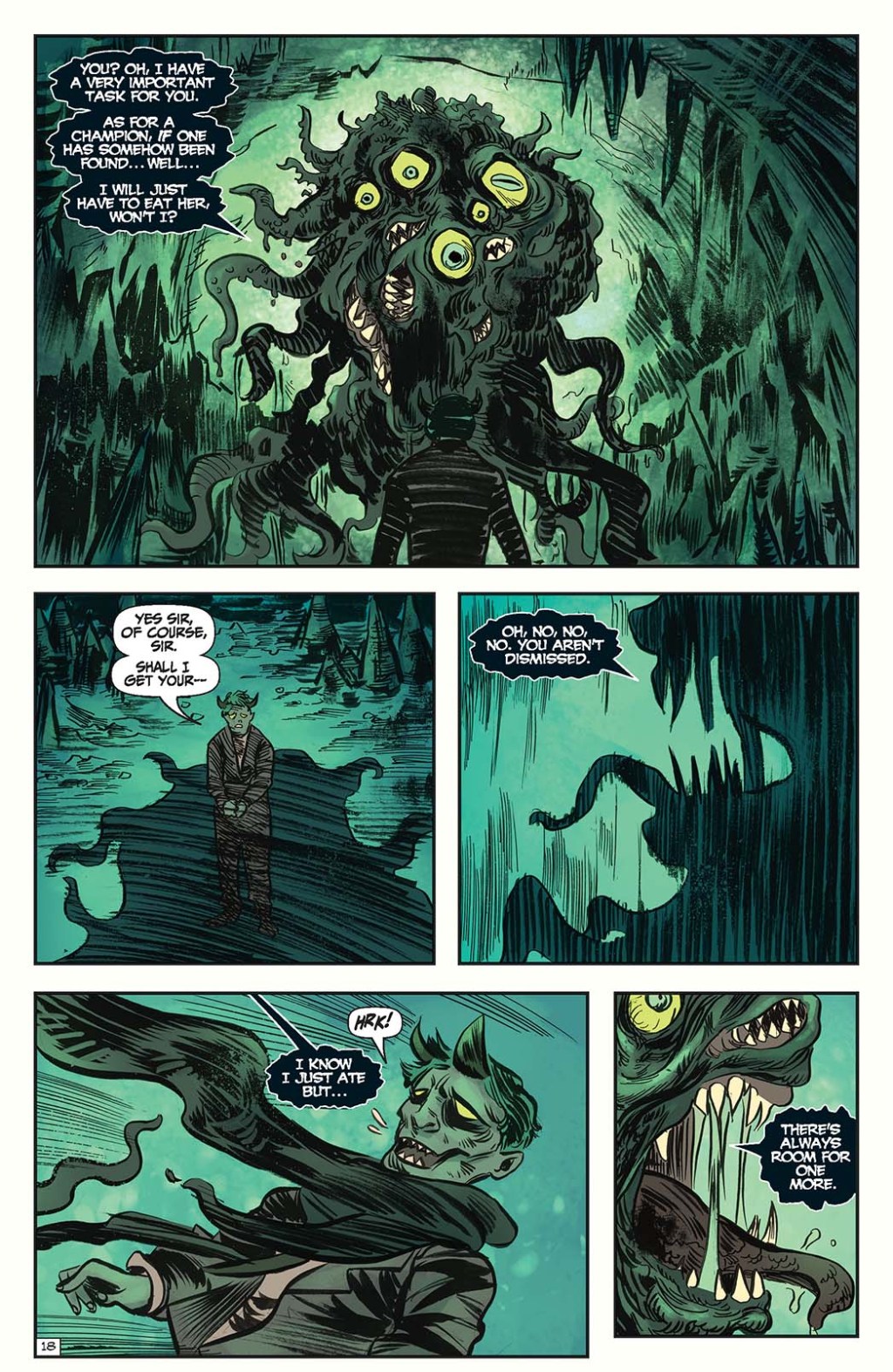 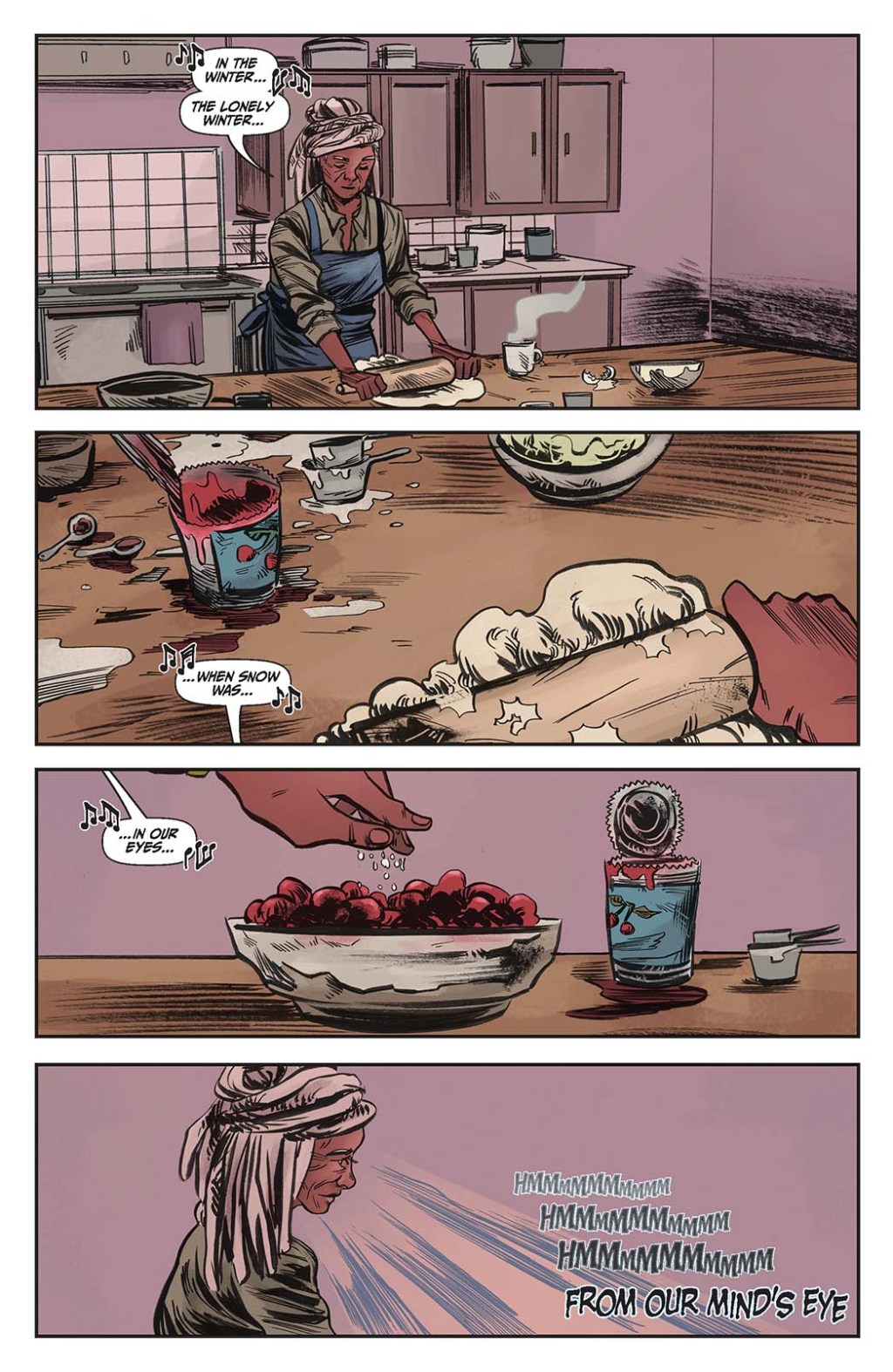 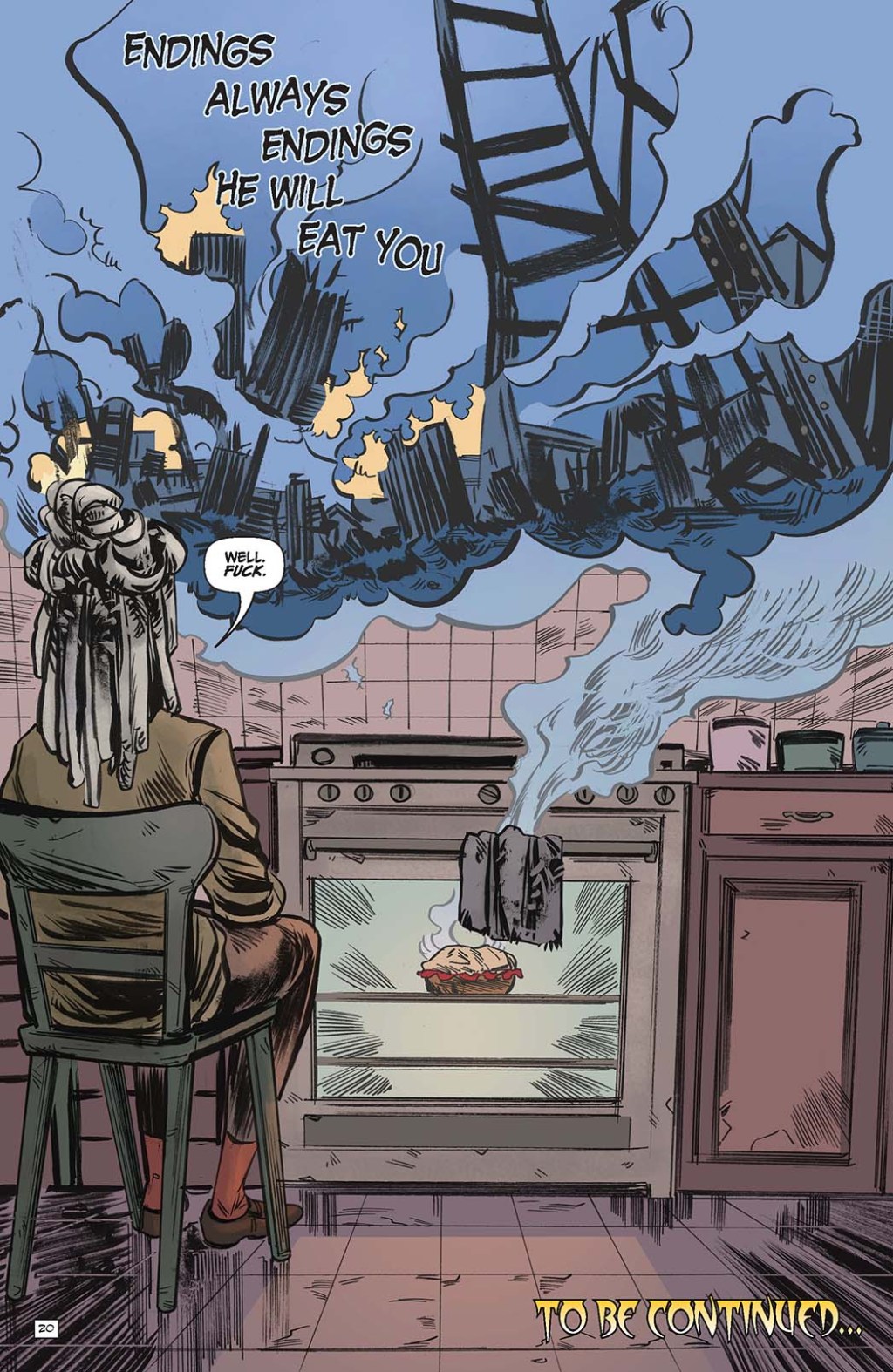