A nuclear submarine is being attacked by pirates when something hits the hull, knocking the saboteurs off-balance. We see a figure cut through the water and hit the submarine like a battering ram before lifting it higher and higher, until it breaks through the water. The rumors are true — the hero of the deep has returned. The bulkhead is wrenched open and a figure drops to the floor of the ship, long-haired and tattooed. “Permission to come aboard?” he says with a wry smugness that’s immediately endearing. Right off the bat we’re assured that Aquaman, a character most known to a non-comic reading public as the guy in the orange and green suit who talks to fish, is the pinnacle of coolness.

As James Wan’s Aquaman swims into theaters over the holidays, much of the conversation thus far has revolved around the film making the character appealing to audiences who have witnessed characters as big as Batman and as unknown as Groot get a splash of modernity. While Aquaman is a known entity, he’s still considered an underdog. Before a screening, a PR spokesperson introduced the film by saying, “imagine if I told you 10 years ago that Wonder Woman and Aquaman would be DC’s best films.” The audience responded with good-natured laughter and who could blame them? From Super Friends to Entourage, Aquaman has largely been treated as a joke in pop culture. He’s the background player in SNL skits, a cutaway gag in Family Guy, and parodied in Spongebob. Part of the appeal of Aquaman, and its marketing strategy that seems to be working, is that a character generally considered to be uncool is the star of one of the coolest movies of the year.

For those who only keep the happenings of comic books in their periphery, Aquaman’s makeover began only a few years ago when Zack Snyder cast the larger-than-life Jason Momoa as Arthur Curry in Batman v Superman: Dawn of Justice (2016). Then, it seemed odd to moviegoers that Snyder would cast the actor as the commonly regal, blond-haired and blue-eyed Aquaman. Surely this was an attempt to shift Aquaman in a new direction and gain goodwill from Game of Thrones fans, who knew Momoa for his role as Khal Drogo. The casting wasn’t controversial per se, at least not compared to other actors who have suffered the slings and arrows of social media’s casting opinions, but Momoa certainly didn’t fit with the preconception of Aquaman. For many, James Wan’s Aquaman will be seen as the culmination of a couple short years of Aquaman’s glow-up. But the film is much more than a quick reassessment of the character. It’s a deeply knowledgeable and faithful adaptation that works on the basis of Wan being absolutely certain of one very important thing: Aquaman has always been cool.

When Aquaman, created by Paul Norris and Mort Weisinger, first debuted in the pages of More Fun Comics No. 73 (1941) he was a backup character, along with the simultaneously debuting Green Arrow. And while these early Aquaman stories, which were quaint in the way that only Golden Age comics could be, offered a different origin story from the one that would later be adopted in the Silver Age, Aquaman proved to be a success. His popularity survived through World War II, something that couldn’t be said for many comic book characters who vanished after the war, and he went on to become a founding member of the Justice League of America. While our understanding of cool may have been different during the middle of the 20th century, and Aquaman never reached Batman or Superman level of merchandizing, he was considered a gold standard — a clean-cut hero whose adventures took readers to new corners of the world and whose supporting characters and aquatic friends gave him a narrative versatility. If there was one alteration to the character during this period that would prove damning it was the decision that his weakness should be that he had to be in contact with water every hour. And just as Superman was threatened with Kryptonite, and Wonder Woman tied and bound, Aquaman’s foes continuously threatened to dry him out.

When the Super Friends began running on ABC in 1973, much of the character’s versatility shrank so that if the mission didn’t involve water, Aquaman was pretty useless. Super Friends became the predominant means of exposure to DC’s heroes, and with Aquaman’s book no longer in the newsstands, having been canceled in 1971, there was no means to combat the idea that Aquaman was a joke who water skied on fish. Aquaman was revived in 1977 in the now famous “Death of a Prince” arc from David Michelinie and Jim Aparo in which Black Manta kills Aquaman’s son, creating a rift between King Arthur and his wife Queen Mera. Michelinie and Aparo added some gravitas to Aquaman, and while the Modern or Dark Age of comics wouldn’t properly begin until five years later with Frank Miller’s Daredevil and Alan Moore’s Swamp Thing, Black Manta’s murder of a baby was one of the darkest points in mainstream comic history at that point, and hinted at the shape of things to come. 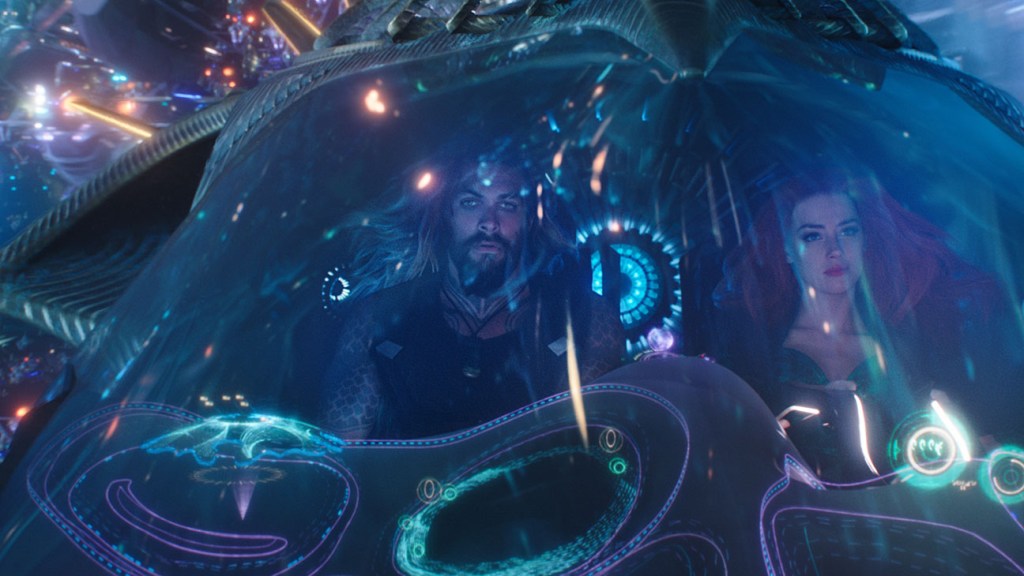 The gravitas that Aquaman had earned in the late ’70s stuck. And while Superman (1978) flew into theaters with a call for hope, optimism and classic good and evil, DC Comics was changing. Superman may have been placed at the forefront of public consciousness in terms of what these heroes meant, but Aquaman, just under the surface, showed better than almost anyone save Batman, what the future for superheroes looked like. It’s this tonal shift in comic books from the Silver Age to the Modern Age that Wan manages to capture so well in his film. Aquaman has faced some criticisms over its tone, and said inability to decide whether it wants to be dark and serious or light and fun. But the truth of the matter is that Aquaman has always served both. Aquaman being of two worlds is not simply a land and sea division, or his heritage as both the son of a lighthouse keeper and a queen. It’s the division, or rather blending of a history that includes an octopus sidekick and water-themed villains, and the dissolution of a marriage when one of those water-themed villains suffocates a baby in oxygen in the hopes of ruling Atlantis in what may or may not have been an attempt to create an empire for oppressed African-Americans. It’s nutty, and (overly) complicated but it’s also the beautiful nature of comic books.

While Aquaman never really went away, his solo series ended, and DC’s Crisis on Infinite Earths (1985) promised to rewrite comic book history, leaving readers and comic creators to consider where Aquaman fit into all of this. While various miniseries attempted to find the answer, it wasn’t until 1993 when Peter David finally solved the riddle of Aquaman. Having told the entire history of Atlantis in The Atlantis Chronicles (1990), David rewrote Aquaman’s origins in Aquaman: Time and Tide, before launching into a four-year run on the character’s book. It’s in these pages that so many of the elements that would inspire Snyder’s casting of Momoa and Wan’s execution were found. Aquaman was no longer king, Mera had left him and his ties to the Justice League were strained. David’s Aquaman was long-haired, bearded and angry. Further sealing the new direction for the character, David had Aquaman lose his hand in the second issue before he had it replaced with a harpoon. This depiction of Aquaman lasted throughout the ’90s, and went on to become the basis of the character’s appearances in the animated Justice League (2001). The new look and the emphasis on fantasy elements made Aquaman DC’s very own Conan. It seems fitting of course that Momoa, who portrayed the character in Conan the Barbarian (2011), should also put his mark on Aquaman. 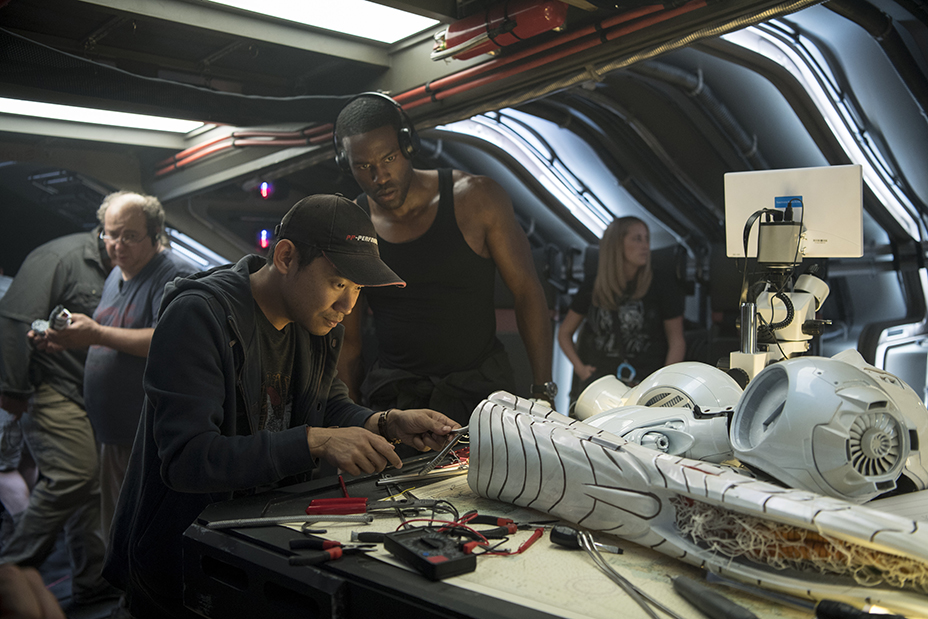 In terms of the film’s visuals, Wan draws a lot from the ’90s Aquaman comics. Even much of the language feels borrowed from those issues. Aquaman doesn’t simply feel like a throwback to the styles of ’80s giants Steven Spielberg, George Lucas and Robert Zemeckis, along with cult filmmakers like John Boorman and Terry Gilliam. It also feels like a throwback to the entire comic book history of Aquaman, ranging from the cheesiest moments to the most badass. While tonally completely different, Wan takes the same comprehensive approach to source material that Zack Snyder did, only he doesn’t deconstruct Aquaman, rather constructs the most appealing version of the character in order to say this is who Aquaman is definitively. Comic book writer Geoff Johns, who co-wrote the film’s story, made a very similar effort when he and artist Ivan Reis put their stamp on the character for 2011’s New 52 launch. Johns took the not quite meta approach of positioning Aquaman in a world where he is considered a joke by people unfamiliar with him, and then shattering their expectations by proving his capabilities. While Aquaman’s plot may lean most closely to be Johns’ run in which Aquaman and Mera faced off against Ocean Master and Black Manta, the film truly is the sum of a wide range of influences.

Although Wan isn’t adapting any particular Aquaman story, he manages to find a cohesive take on the character’s history by way of both heart and style, similar to what Raimi achieved with Spider-Man (2002). Perhaps it’s a testament to horror directors, so often aware of influences and history, that they make some of the most fulfilling comic book movies. Wan’s background in horror also speaks to his love of the fantastic. There’s nothing grounded about this film. And while filmmakers like Christopher Nolan and Jon Favreau have found great success in picking out the moments of reality in comic book history for their cinematic turns, Wan goes for the boldest and most visually pleasing moments of unreality. Nearly every shot, from an octopus playing the drums, to Aquaman riding atop a giant seahorse, is pulled directly from Aquaman’s long comic book history. Wan takes nearly everything that was once considered uncool about the character and redefines it here. Aquaman is a comic book collage and in Wan’s hands, there’s arguably no cooler method for a character that has become the unspoken barometer for DC’s continued evolution.