After finishing high school in Rhode Island in 2008, Joe Begos drove to Los Angeles, like so many before him, with the dream of making movies. Upon arriving, the first place that Begos raced to was the ArcLight cinema on Sunset Boulevard, where his filmmaking idol, David Cronenberg, was delivering a Q&A at the Cinerama Dome after a 35mm screening of his 1986 horror classic, The Fly. Within five days of being an Angeleno, Begos got a job at the ArcLight in Sherman Oaks, where he worked as an usher, in concessions and delivering prefilm audience greetings for the next year.

“That’s how you found your clique, your people,” says Begos, who went on to produce and direct four indie horror features, including the films Bliss and VFW, of joining the tribe of Hollywood aspirants who worked at one of the theater chain’s six L.A. locations. “The ArcLight was my film school. I always figured, if I ever have a movie open at the ArcLight, I’ll know I’ve made it.”

As the cinephile’s movie theater chain, the ArcLight’s success depended in no small part on its enthusiastic employees, clad in their blue button-down shirts, most of whom were plotting their own entertainment careers, writing scripts while waiting to take tickets and devouring the chain’s many filmmaker Q&As as they ran the projectors for the accompanying screenings. The recent news of the closure of the ArcLight Cinemas and Pacific Theatres — a more than 300-screen chain that has been shuttered since the start of the pandemic — inspired social media elegies from filmmakers like Rian Johnson, Barry Jenkins and Gina Prince-Bythewood.

For former ArcLight employees, the closure, which the brands’ parent company, Decurion Corp., announced in a statement April 12, has been an even deeper wound. “I didn’t realize how much I loved this job until I lost it,” says Katelyn Nelson, a projectionist at the Hollywood location who has been on unemployment since ArcLight and Pacific Theatres locations closed last March, leaving 500-plus staffers in the state out of work. “I’m devastated. Everyone is shocked. No one was expecting this. Neither the manager nor the GM told any of us ahead of time.”

With so many theater chains relying on computerized projection, the employees at the ArcLight enjoyed a rare union projection job, one covered by IATSE’s Local 33 union — the TCL Chinese Theatre is one of the only other screens in L.A. to have unionized projectionists. “I’m probably not going to find another theater company that would staff me as a projectionist,” says Nelson, who was one of five full-time projectionists at the Hollywood ArcLight, where she has worked since June 2018. Despite having projection experience, Nelson had to undergo a two-month training program to become a projectionist at the ArcLight. “The ArcLight took their job a lot more seriously than everybody else,” she says. “They wanted quality in presentation and service.” 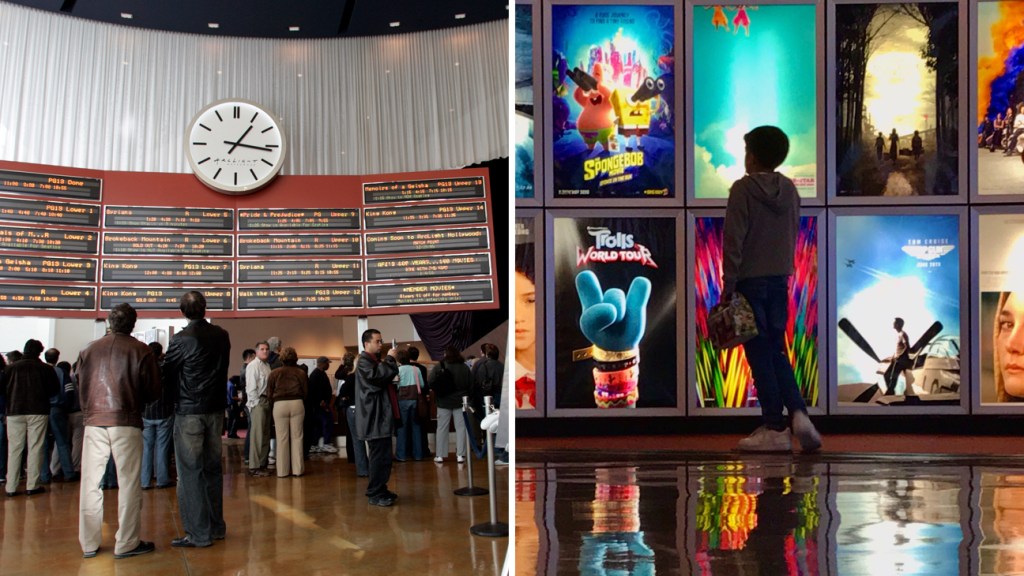 Like many film fans, Nelson is holding out hope that the news of the closure may be premature — some have speculated it was a rent-negotiating tactic. (A representative for the ArcLight declined to comment on that theory.) “Part of me still feels like maybe this isn’t final,” Nelson says.

While the work was often mundane — filling fountain drinks, reminding people to turn off their cellphones — most ArcLight employees saw the job as a stepping-stone.

“Everybody viewed this chapter in their life as their [Quentin] Tarantino moment working in the video store,” says Lorin Williams, a script coordinator at Nickelodeon who got a job at the Sherman Oaks location in 2008 when she moved from Orlando to L.A. after film school. At the time, Williams also was working in reality TV, but, she says, “The ArcLight felt bigger than my actual work in reality TV. It felt closer to the action.”

Like all employees, Williams wore the name of her favorite film on her name tag — Paper Moon. One day when she was working concessions, a distinguished-looking older gentleman asked her whether she knew who had directed the 1973 black-and-white film. “I said ‘Peter Bogdanovich,’ ” Williams says. The man held her gaze for a moment. “As he walked away, he gave me this little ‘I know something you don’t know’ look,” she says. It was only after the man had left the counter that Williams realized she had just served popcorn to Bogdanovich.

In an industry that can be outright hostile to people without money, connections or a costly film school degree, an ArcLight job supplied a different kind of community of like-minded pop culture obsessives. Angelica Davis moved from South Carolina to L.A. in the summer of 2017 for an unpaid internship at the management company Circle of Confusion that she was doing for college credit. To pay her bills, she picked up a job as a projectionist at the ArcLight in Culver City. “The ArcLight was a turning point for me in my life,” says Davis, who now works at Mattel. “It was there for me when I arrived in California.”

Begos also met lifelong friends at the ArcLight, including Brian Dutton, who would go on to produce all his features, including his latest horror thriller, VFW. Before the pandemic set in, on Feb. 15, 2020, Begos went to the Hollywood ArcLight location to see VFW, which was screening in 35mm as part of a day-and-date release by RLJ Entertainment. “I didn’t know it at the time, but that was the last movie I ever saw at the ArcLight,” Begos says. “My freakin’ own.”