The last few years have seen what appears like a marked increase in the number of movies featuring dogs whose inner thoughts can be heard by the audience. A Dog’s Purpose in 2017 grossed $205 million worldwide, though the 2019 sequel A Dog’s Journey wasn’t quite as successful with $67 million worldwide. Meanwhile, the unrelated A Dog’s Way Home earlier this year brought in $76 million worldwide.

This week Disney drops the popular “A Dog’s…” naming convention but still jumps on the bandwagon with The Art of Racing in the Rain, an adaptation of the 2008 novel from author Garth Stein. Milo Ventimiglia takes a break from TV’s This Is Us to play Denny Swift, a race car driver who one day adopts a big friendly dog he names Enzo, after racing legend Enzo Ferrari. Enzo (voiced by Kevin Costner) longs to be the best dog he can and learns lessons from both Denny and television, lessons he uses to protect Denny, Eve (Amanda Seyfried) and the family they start.

Disney’s campaign for the movie, which it inherited from Fox 2000, has used all the conventions common on talking-dog movies to sell a feel-good alternative in a period between superhero adventures and other franchise action. 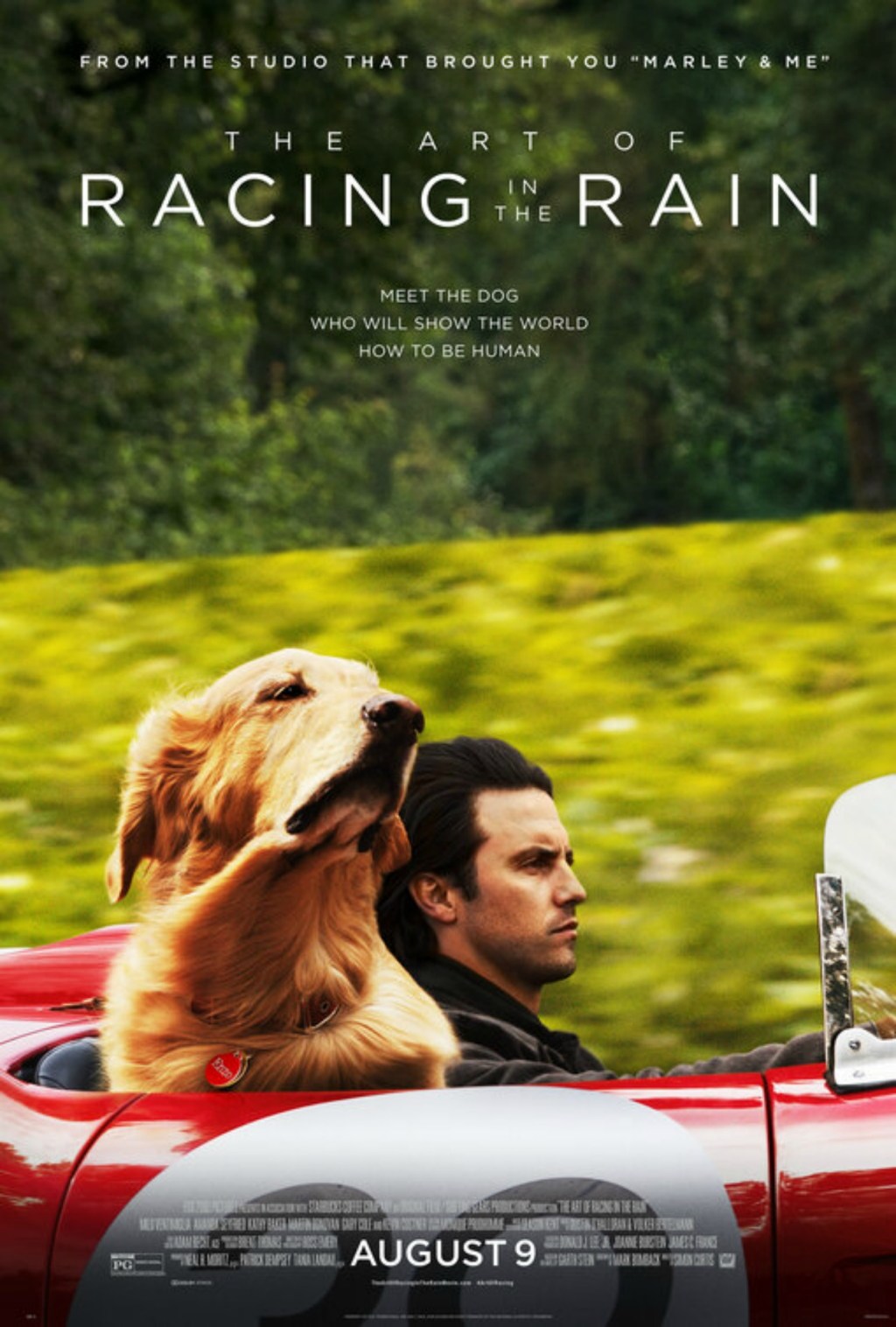 The first and only poster was released in mid-May along with the trailer. It shows everything the audience needs to know about the movie, focusing on a picture of Enzo and Danny out for a drive in his sports car, the wind blowing through their hair. At the top, people are reminded that this comes from the same studio, Fox, that produced Marley & Me, so it has a quality pedigree.

The trailer (5.3 million views on YouTube) from May starts with Denny finding Enzo and selecting him from a litter of pups, all while we hear Enzo narrating how the two were fated to be together. Like his person, Enzo is drawn to the sights and sounds of the racetrack and eventually accepts Eve after she and Denny have a meet-cute. From there it’s a montage of footage showing how they navigate “the curves life will throw at you,” all while the bond between Enzo and Denny remains the focal point of the story and the main relationship the story is committed to telling. 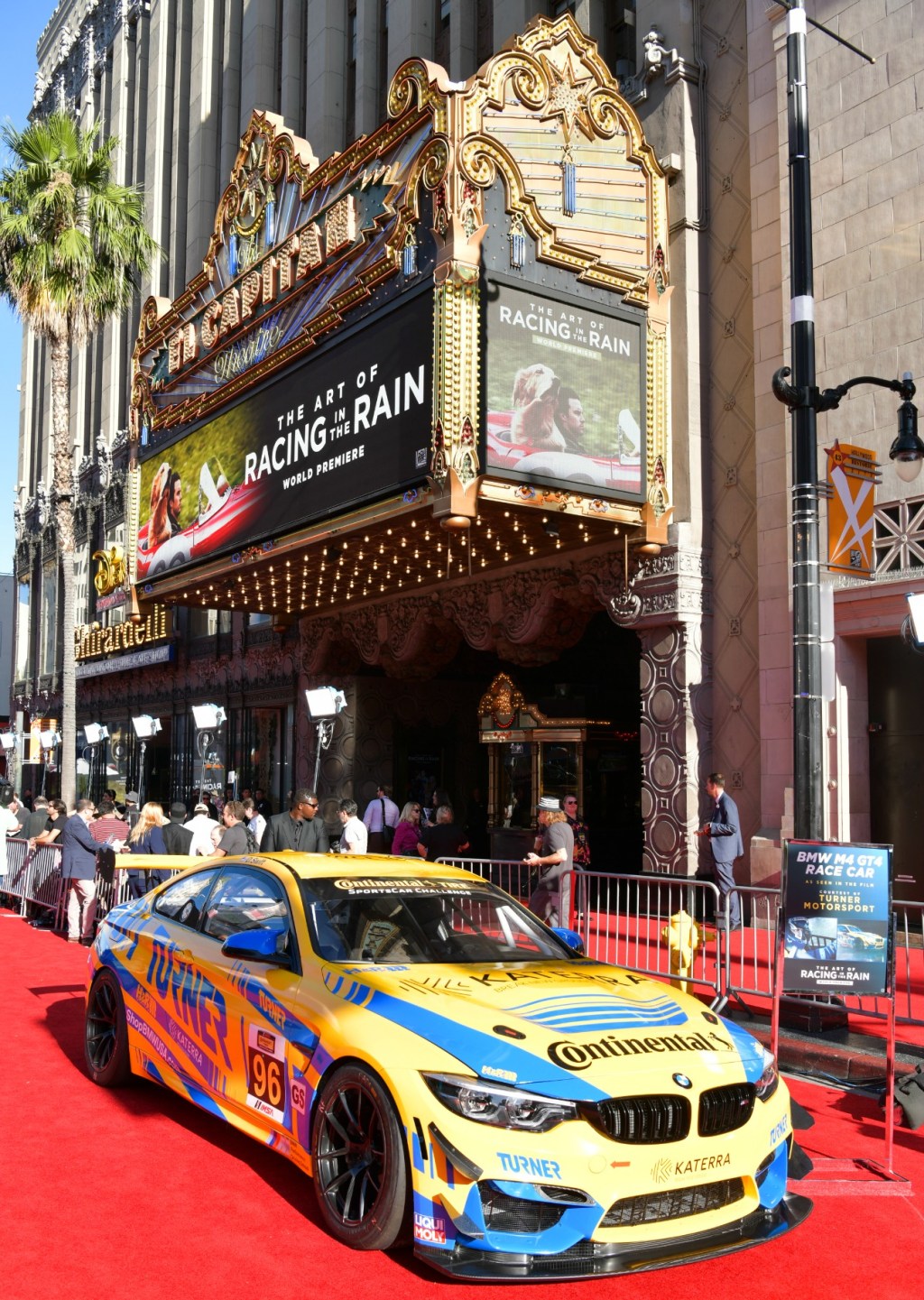 A Promoted Tweet increased the reach of the first trailer shortly after it was released.

Late June brought the first clip, showing the scene where Danny and Enzo meet Eve for the first time. A few weeks later another clip showed the moment Denny meets Enzo for the first time. Further clips offered more expanded looks at the movie, from Denny’s racing ability to the wedding of Denny and Eve and more.

A featurette released in mid-July had Ventimiglia explaining the thematic parallels between living life and racing cars, including how both involve being in the moment and adapting to the conditions around you. Another introduced the audience to Parker, the dog that plays Enzo in the film. The friendship between Denny and Enzo was covered in another video focusing on the connection between man and dog.

PetCon, an annual convention for pet owners and pet lovers, featured a booth sponsored by Fox where attendees could have their picture taken with their pets in a race car like the one Denny drives in the film. The stars of the movie — both human and canine — appeared there as well, taking part in Q&As and posing for pictures.

When Disney hosted its Social Media Conference at Walt Disney World in July, attendees were given a preview of the movie along with a copy of the original novel.

HarperCollins took advantage of the movie hitting theaters to raise interest in the tie-in version of the novel on which it’s based.

Author Garth Stein was featured on a Book Con panel in May that included an appearance by Parker, the dog that plays Enzo. In late July, Stein participated in a Q&A about the book that included a Dallas screening of the movie. Members of the cast as well as director Simon Curtis joined Stein for a book signing in Los Angeles.

Ventimiglia starred in a video for the American Library Association to highlight the important role libraries play in connecting communities and offering resources.

TV spots began running a couple weeks prior to release with spots that had Ventimiglia and Seyfried promising the audience a cute dog and a good cry to more traditional commercials that played like cut-down versions of the trailer.

The Hollywood premiere last week at the El Capitan Theater allowed the cast and crew to talk about dogs, racing, the movie’s story and more. That premiere included producer Patrick Dempsey, who shared the advice he gave Ventimiglia based on his own years of competitive race car driving. 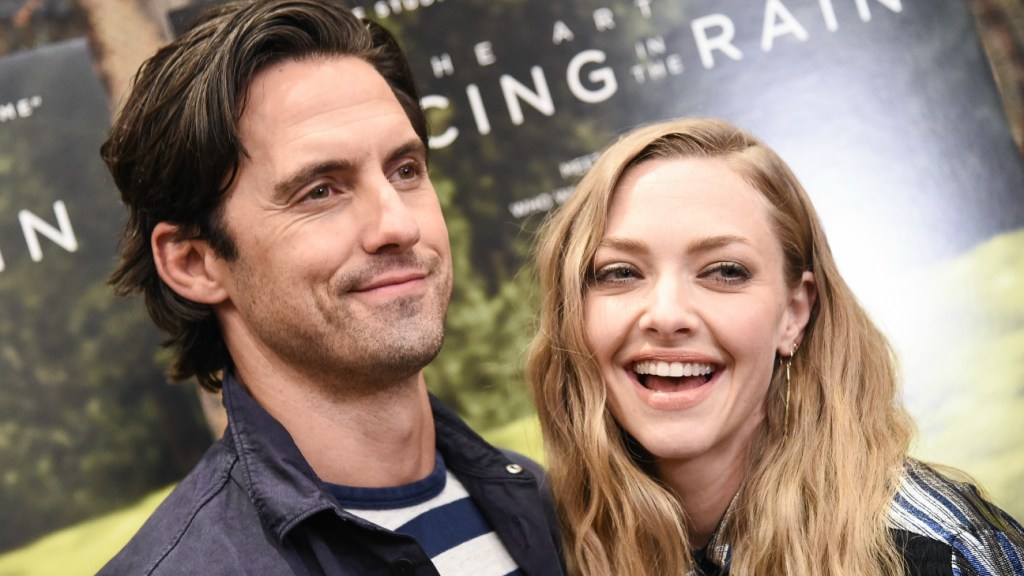 While the campaign appears to be condensed — it began just over three months ago with the release of the first trailer — that short window of time has allowed it to stay on message from beginning to end. Time and again the audience has been promised they will follow the emotional story of Enzo and his time with Denny and Eve, with plenty of tears and other emotions along the way.

In doing so it’s offered a more distinct alternative to big-budget blockbusters than almost any other recent movie campaign. It’s not a high-concept comedy that feels superfluous to superhero movies that are often as funny as they are action-packed. Nor is it relying on an existing brand affiliation such as the Beatles catalog to create familiarity in the audience. Instead it’s a good old-fashioned tearjerker that, the studio hopes, is best experienced with others in the theater.

'The Art of Racing in the Rain': Film Review