The final moments of Avengers: Infinity War are certainly dramatic, and seemingly climactic for a number of players. But if it leaves audiences convinced there’s more to the story, there’s a reason for that: In the comic book series that inspired the final scenes, the big moment happens just two-thirds of the way through the first issue.

To reiterate the above warning, do not read further unless you have seen Infinity War. You may even want to be cautious if you don’t want to know where the comics went after similar events to the film’s ending.

Yes, Infinity War appears to end with Thanos (Josh Brolin) victorious, succeeding in his quest to kill half of all life in the universe. Audiences even see marquee characters like Spider-Man (Tom Holland) and Black Panther (Chadwick Boseman) crumble to ash as part of that death toll — which might be the first clue that things are clearly not going to remain this way forever. Indeed, Infinity War has already offered up at least one fix for the problem within the movie itself, when Thanos used the Time Stone to undo the destruction of the Mind Stone by the Scarlet Witch (Elizabeth Olsen); there’s nothing to stop someone else undoing Thanos‘ victory should they manage to possess the Time Stone. Of course, that might be difficult considering Thanos has all the other Stones, as well. …

In Marvel’s 1991 comic book series The Infinity Gauntlet, Thanos actually kills 50 percent of everything on page 28 of a 40-page first issue, with the subsequent five issues dedicated to the universe’s response to that event and how everything gets restored back to normal (after all, several of the slain characters have movies heading into production). 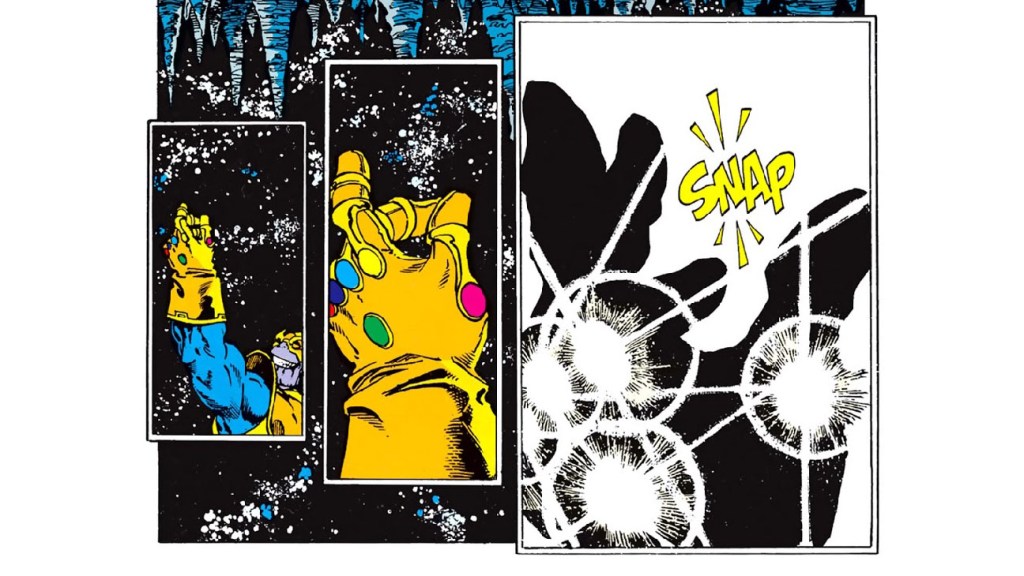 Indeed, although the details differ between comic book and screen, the final pages of Infinity Gauntlet No. 1 might seem familiar to movie audiences: Heroes respond to the sight of people disappearing before their eyes with confusion and panic, as a sense of dread and hopelessness builds. There’s even an interlude with Nick Fury and his trusted female co-worker, where they discuss how bad it all seems. (Nick sticks around in the comic book, however; sorry, Samuel L. Jackson.) The parallels between the climax of that first issue and the end of Infinity War likely mean that comic book fans will see the ending of the movie very differently from audiences unfamiliar with the source material.

It’s worth pointing out that the current setup of the Marvel Cinematic Universe means that the next Avengers movie literally can’t play out as a direct adaptation of the Infinity Gauntlet comic book; many of the central characters and concepts in the comic book series don’t even exist in the MCU yet — most important among them: Adam Warlock, who’ll reportedly debut in Guardians of the Galaxy Vol. 3, due out in 2020 after Avengers 4. The mechanism by which Thanos is ultimately defeated in the comics involves a character dynamic missing entirely from Infinity War‘s storyline. 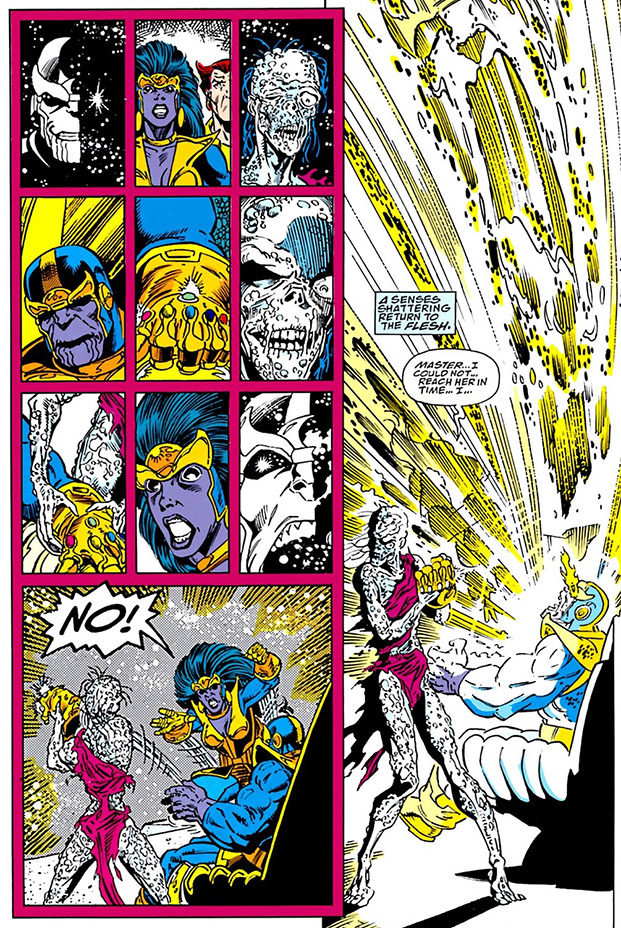 Once the comic book Thanos has the Infinity Gauntlet, according to writer (and Thanos creator) Jim Starlin, the only thing standing in his way is himself; his overconfidence allows Nebula — his granddaughter, in comic book continuity, although he denies it for reasons never fully explained — to steal the gauntlet from his hand at a point where his spirit has left his body after he achieves a level of cosmic awareness. Nebula immediately uses the gauntlet to undo everything Thanos had done out of spite, resurrecting the dead and removing everyone’s memory of events, before losing control of the gauntlet herself; in the subsequent brawl, Adam Warlock gains control and resets the universe one more time, leaving Thanos as a farmer on a deserted alien planet, surprisingly at peace with losing near omnipotence.

It’s possible that Avengers 4 will choose a different route when undoing Thanos‘ killing spree — the post-credit scene suggests an appearance by Brie Larson’s Captain Marvel in the sequel, so perhaps the cavalry’s on its way to change the dynamic — but there’s something to be said for the gracefulness of allowing Thanos to ultimately be his own undoing. But who among the cinematic cast would be willing to make a grab for the gauntlet when all else seems lost? If only there was an Iron Man with a god complex and tendency to take stupid risks for potentially great reward around …

Avengers: Infinity War is in theaters now. Avengers 4 will be released in May 2019. 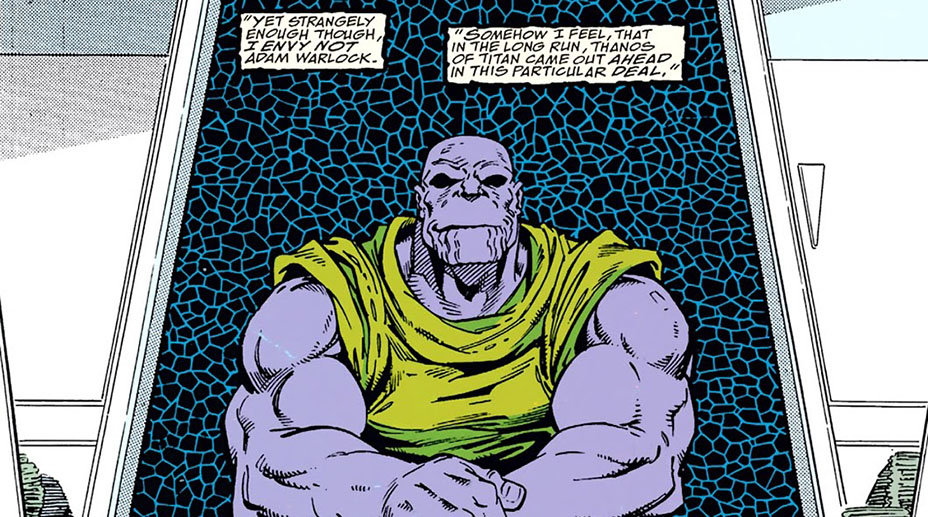