Continue to The Hollywood Reporter SKIP AD
You will be redirected back to your article in seconds
Skip to main content
November 17, 2019 1:28pm
Logo text

Joe and Anthony Russo have directed two of the five highest-grossing films of all time, including Avengers: Endgame, which in July passed Avatar on the all-time list. But the duo, who came up through the world of television, are stepping back from the Marvel Universe to a more mid-range budget on Friday with the STX crime thriller 21 Bridges, which they produced along with star Chadwick Boseman.

21 Bridges opens seven weeks after Oscar-winning filmmaker Martin Scorsese turned heads with an interview in Empire in which he said Marvel films were more like theme-park rides than cinema. “It isn’t the cinema of human beings trying to convey emotional, psychological experiences to another human being,” said the director, who further expounded upon his thoughts in a Nov. 4 New York Times op-ed. Both Marvel’s detractors and defenders have waded into the debate, and on Sunday, the Russo brothers shared their own thoughts publicly for the first time while doing press for 21 Bridges.

“Ultimately, we define cinema as a film that can bring people together to have a shared, emotional experience,” Joe tells The Hollywood Reporter.

The Russos grew up devouring genre movies and art house films alike. They would frequent their local art house theater in Cleveland and spend hours debating the merits of the films they saw. The siblings would also stay up late on Saturdays to watch late-night genre movies with their father, devouring films like The French Connection and The Taking of Pelham 123, both of which they cite as inspirations for 21 Bridges.

“When we look at the box office [of] Avengers: Endgame, we don’t see that as a signifier of financial success, we see it as a signifier of emotional success,” says Joe of the film, which earned $2.78 billion globally. “It’s a movie that had an unprecedented impact on audiences around the world in the way that they shared that narrative and the way that they experienced it. And the emotions they felt watching it.”

Scorsese has noted that he has tried to watch a few Marvel films, but quickly abandoned them. The Russos note it’s challenging to have a dialogue about cinema if the acclaimed director hasn’t seen the films he is talking about.

“But, at the end of the day, what do we know?” Joe says, jokingly. “We’re just two guys from Cleveland, Ohio, and ‘cinema’ is a New York word. In Cleveland, we call them movies.” 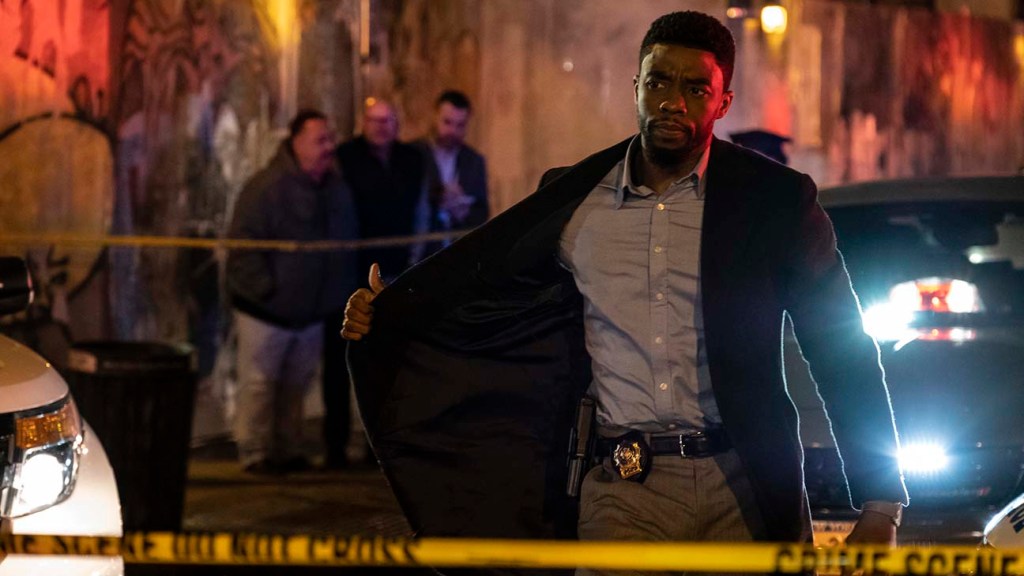 Directed by Brian Kirk, 21 Bridges centers on police detective Andre Davis (Boseman), who shuts down the island of Manhattan after eight police officers are gunned down during a robbery gone wrong. With the film, the Russos found themselves juggling producing duties while also directing 2018’s Avengers: Infinity War and April’s Avengers: Endgame.

“You are stepping off during setups on Avengers to take a phone call to deal with production issues on a movie like 21 Bridges,” explains Joe. “At the end of the day, irrespective of how much of an energy drain it may be on you, we couldn’t be happier with the film.”

The Russo brothers famously cast Boseman as Black Panther in Captain America: Civil War via a conference call that saw the actor pulled off a red carpet and ushered into a car to hear about the role from the Marvel Studios team. A few short years later, Boseman led Black Panther to more than $1.34 billion at the global box office. After Black Panther‘s success, he had his pick of projects and chose to jump aboard 21 Bridges.

“We didn’t really come at it as something we had to sell him on. It was a project that we really believed in and were creatively excited by,” Anthony says of bringing the project to Boseman. “We knew we had something special in Andre Davis, in that character. We knew it was something Chadwick might respond to.”

For the film’s antagonists, the team brought on board Taylor Kitsch and Stephan James. Both characters have mysterious pasts, and James’ character in particular resonated with test audiences.

“When we are casting characters who are very morally complicated … we look to actors who have a really high level of charisma,” says Anthony. “That helps us balance the storytelling in terms of how the audience is receiving these ideas.”

Though the Russos have closed out a chapter of the Marvel Cinematic Universe with Avengers: Endgame, they continue to work with actors from their past, via their AGBO banner.

The brothers are currently directing Cherry, which stars Spider-Man actor Tom Holland as an Army medic who finds himself addicted to opioids after returning home with PTSD and who begins robbing banks. They are also producing the Netflix action movie Dhaka, with Thor star Chris Hemsworth. Numerous members of the 21 Bridges team comes from their Marvel movies, as well.

“Part of why we do this is we grew up in a big, Italian family in Cleveland, Ohio,” says Joe. “And we like to create a big extended work family that we can work with over and over again.”