As the Marvel Cinematic Universe continues to expand, it’s clear that cosmic side of things will increasingly come to the forefront. The cosmic corner of the Marvel Universe, though often inextricably linked with the dealings of Earth-bound heroes, is a difficult realm to navigate and keep track of, even for longtime comic readers. There’s a lot going on out there from personified entities, living planets, alternate dimensions, space messiahs and millennia-spanning wars. The Guardians of the Galaxy, Thanos, and the Infinity Gauntlet only scratch the surface on the amount of weird and truly mind-bending characters and elements comic creators have established over Marvel’s 80 years of publications. In others words, fans of the MCU should strap in because things are shaping up to only get weirder after Avengers: Endgame.

Once Disney’s acquisition of 20th Century Fox concludes, it will have access to even more of Marvel’s space-faring characters, many of whom debuted in the pages of Stan Lee and Jack Kirby’s Fantastic Four. It would make sense for the MCU to introduce a character who could guide audiences through this weird new territory, especially with Guardians of the Galaxy Vol. 3 currently on hold and The Eternals still being an unknown entity. Captain Marvel, who debuts in her own film in two weeks, can certainly shoulder some of the responsibility of taking audiences to new galaxies, but all signs point towards her being closely tied to whatever iteration of the Avengers forms in the aftermath of Endgame. But there is another character, one who hasn’t been seen onscreen in twelve years, and has never been accessible to the MCU before who could provide a marvelous trip through the cosmos. That’s right friends, it’s time for the Silver Surfer to rise once more.

The Silver Surfer made his debut in the pages of The Fantastic Four No. 48 in 1966. One of Kirby’s purest and most immediately striking designs, Silver Surfer ushered in what many comic fans consider to be a high point of Lee and Kirby’s run, “The Galactus Trilogy.” The Silver Surfer was a character entirely of Jack Kirby’s creation, a rare break from the Marvel Method that saw he and Lee collaborate from story ideas. Lee’s initial reaction to the Surfer was that Kirby had taken things too far and that the idea of a cosmic herald on a surfboard was too silly to be taken seriously. Kirby, tired of drawing spaceships, was set on the surfboard and eventually Lee agreed and thus a legendary character was born. The tragic and noble Silver Surfer was once a humanoid alien named Norrin Radd who bargains with planet-eating Galactus to spare his world of Zenn-La and in return serve as his herald, seeking out other planets for the voracious entity to feed on. While he tried to seek out uninhabited planets, Galactus often overruled him through his corruptive powers and instead devastated worlds that had sustained life. Although the Surfer imbued with the Power Cosmic eventually manages to defeat Galactus alongside the Fantastic Four, he comes up against the world-devourer time and time again as his adventures take him across the universe. 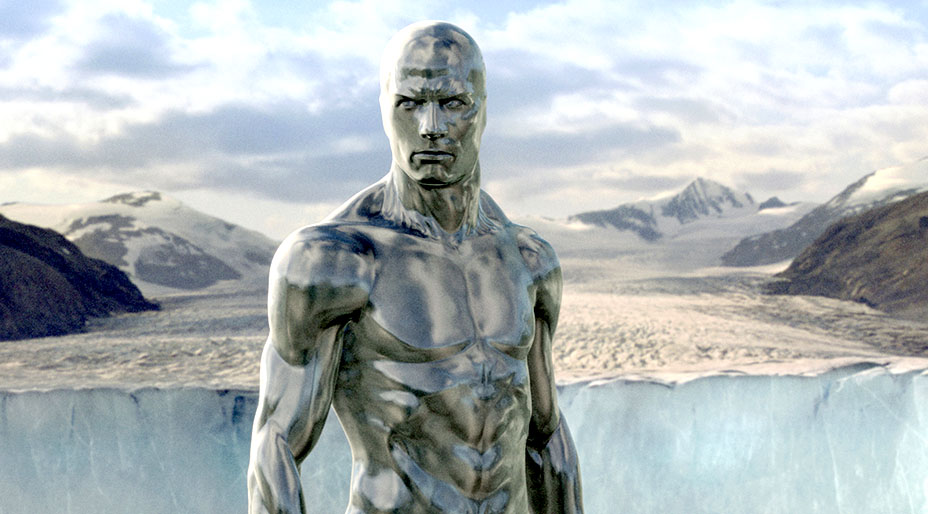 Over the years the Silver Surfer has emerged as a fan-favorite character. And while never reaching the heights of Spider-Man or Wolverine, his strong following has made him an indispensable part of the Marvel Universe and the star of several well received solo series. It was the Surfer’s comic series that served as the lead-in to the now iconic storyline The Infinity Gauntlet. And from Kree-Skrull conflicts to Asgardian battles, the Silver Surfer has set foot in every known corner of the Marvel Universe, while acquiring a notable list of adversaries including Thanos, Mephisto and Doctor Doom. Because of his connection to so many characters and important events the Silver Surfer has felt like a missing ingredient in the MCU. His appearance would not only be welcome but provide a necessary means to explore some of Marvel’s oldest conflicts and relationships. Unlike some of the MCU’s current heroes, who were largely unknown by general audiences before the release of their movies, the Silver Surfer is recognizable from previous television and films appearances, which could make re-introducing him all the easier.

“I was on board then, and I would be on board now if the Surfer ever came back. He’s a beloved character and I would love to play him again,” Jones said.

I’d certainly love to see Jones return and provide his keen sense of physicality to the role. Though comic book movies have changed significantly since Jones’ time as the Silver Surfer, and it wouldn’t be surprising to see Marvel look to a headline-grabbing actor like Keanu Reeves for the role (a suggestion I heard recently and can’t help but love). The fact of the matter is, Jones is too great of a performer not to include in the MCU in some way, and all the better if he could play a major character attached to the Silver Surfer. He could certainly create a compelling and terrifying take on Mephisto, or even fill in Galactus’ mighty helmet.

So what are the chances of the Silver Surfer showing up sometime soon? While the Fox acquisition has yet to be finalized but with things progressing the way they are I wouldn’t be surprised to see him sooner than later. Acclaimed comic book writer Brian K. Vaughn was revealed to be working on a Silver Surfer script in February of last year, though that development may have stalled with the looming buyout. More recently, Ant-Man co-writer Adam McKay has expressed interest in directing a Silver Surer movie. Marvel Comics has steadily been reprinting his solo series and team series, The Defenders, over the past couple years and given that many of their trade collections are tied to film appearances, it’s worth noting. With the merger still yet complete, Marvel won’t be allowed to put any teases into April’s Endgame … but let’s just say if we were to catch even a glimpse of a silver surfboard in the post-credits of Avengers: Endgame, well it might be the most cheer-worthy and thematically fitting final moment since Nick Fury first told Tony Stark he’d just become part of a bigger universe.