Avengers: Infinity War screenwriters Christopher Markus and Stephen McFeely have made a habit of achieving the improbable.

Through three Captain America films, the duo helped make Steve Rogers a mainstream icon, proving that the optimistic, throwback of a superhero played by Chris Evans was relevant for the 21st century. In addition to landing Marvel Studios some of its strongest reviews, 2011’s Captain America: The First Avenger, 2014’s The Winter Soldier and 2016’s Civil War have earned a combined $2.2 billion and solidified the writers as among the most influential architects of the Marvel Cinematic Universe.

But those big films seem almost small when compared to Markus and McFeely’s latest endeavors, Avengers: Infinity War and next year’s Avengers 4. Shot back-to-back, both films are directed by their frequent collaborators Joe and Anthony Russo and are among the most ambitious undertakings in film history. Infinity War pits almost all of the MCU against Thanos (Josh Brolin), the mysterious villain obsessed with acquiring six Infinity Stones so he can become the most powerful being in the universe. The film is off to a strong start at the box office, having already set a superhero record for Thursday night previews.

In a spoiler-free conversation, the duo talk about what Guardians of the Galaxy director James Gunn pushed for in Infinity War, recount the “seven or eight times” they rewrote their scripts, and tease what their professional plans are post-Avengers 4.

Chris Hemsworth is coming off of Thor: Ragnarok, which redefined Thor and made him more relevant and more popular than ever. What kind of input did Hemsworth have on his character in your Avengers films?

Stephen McFeely: Hemsworth came to set, and went, “You guys really need to understand that we are doing something different with Ragnarok.” And we knew they were changing it some, but it was so early in the process, so we flew [Ragnarok screenwriter] Eric Pearson and [director] Taika Waititi in and we had long conversations with them. There are at least a couple of jokes in there Taika himself said in passing that we thought were gold. They showed us a few scenes, so we knew that Thor was being re-toned. And we needed to embrace that.

Christopher Markus: But it was also the realization that even in the “funny” one [Ragnarok], his father and his sister die, and that he’s almost becoming comically unlucky at this point, and to follow that to its natural conclusions.

Not to spoil anything, but there is one scene in particular where Hemsworth delivers quite a moving speech. What do you recall from that day on set?

McFeely: On set that day, we went, “Oh my God. This guy is just stealing this movie.” He started handsome, he became powerful, then he became hilarious, and now he’s actually making me tear up. Screw this guy!

Markus: When you are seven feet tall and that good looking, it can be hard to let people know you are a good actor too. (Laughs.) He’s got it.

You both are a big reason why Captain America is relevant and popular today, beyond comics. And in a very similar way, Guardians of the Galaxy writer-director James Gunn is the reason people care so much about the Guardians. What sort of conversations did you have with Gunn about where his characters would go in this movie?

Markus: James’ contributions were primarily voice-related, to make sure that we are not rolling out people who bear no resemblance to people in the preceding Guardians movies. He was on board everywhere we were taking them. He adjusted one choice in the movie that didn’t really affect how the movie played, but it affected character a little bit. It was a very interesting choice, and first we wavered on it, and then [Guardians star Chris] Pratt backed him up. And we acknowledged, if anyone knows these characters, it’s them.

McFeely. That’s the benefit of all of this. The filmmakers who spent a lot of time with these characters get to come in and help us make sure we are getting it letter perfect. There are 23 people on that poster, so there are going to be people who are slightly more expert at those characters than we are. So, we did that with everybody. [Doctor Strange director Scott] Derrickson and [Black Panther director Ryan] Coogler and Taika and [Ant-Man director] Peyton Reed. 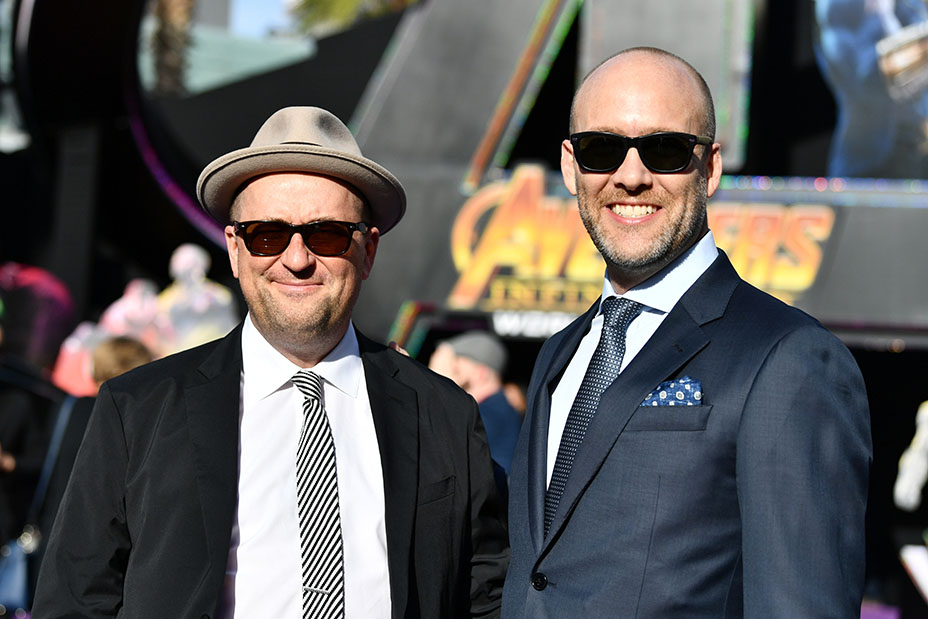 What did Brolin bring to the movie that you may not have expected? I imagine he exceeded your expectations.

Markus: By far. He brought a humanity to it. When you think about the character as large and as powerful and as domineering as Thanos, you think that he probably speaks in big pronouncements. And there was a screen test. It was more of an effects test, early on, where they shot Josh covered in dots. And then they overlaid Thanos on him for the first time. And Josh had been kind of improvising. He was putting a lot of hesitations in and kind of actual, human mannerisms. We were still writing at that point. To see that Thanos was a revelation. It sort of affected the writing going forward, because we realized the quality of the effects and the realism of the acting, this is a character you haven’t seen before.

McFeely: Josh is great. It’s a marriage of Josh and all the stuff that Dan DeLeeuw and his visual effects team is doing. It’s ridiculous.

One of the big draws of this movie is seeing new character pairings. How much shuffling of those pairings did you do through the writing process?

McFeely: It’s fair to say we wrote each movie like seven or eight times, so there are pairings from the first draft or two, for lots of different reasons, that morphed and changed. Some were always rock solid, and some moved around.

Markus: We’re always torn between, “Do you want to pursue a pairing and a relationship that you saw before and let it develop and deepen?” Or, “Do you want to have a fresh one?” And sometimes, the knee jerk is, “No, we’ve seen them together before, let’s switch it up.” But that keeps it on a kind of first-date emotional level. Whereas, if you’ve seen them together before, and now you take them to a much more dire situation and they are together again, you can really get down into the meat of their relationship. So we kind oscillated between those two poles for a little while.

You are both now co-presidents of story for the Russo brothers’ company AGBO. You have a lot of other stuff brewing there. Do you consider Avengers 4 your Marvel swan song?

McFeely: If it is, we’re pretty happy with it. Because boy, Avengers 4, if anything, is better than what you just saw.

McFeely: We’re very pleased with how it’s shaping up. We started this new company. We would love to go back to Marvel at some point, if they’ll have us. But we have this weird, new job where we get to help out a lot of other projects and write our own. It’s really sort of a dream scenario. If it doesn’t kill us, we’d like to try it for a while.

There are secrets Markus and McFeely can’t reveal until people have gotten a chance to see the film, so check out the spoiler-filled part of our conversation here, where the duo talk about crafting the ambitious ending.

To Save the Future, Marvel Studios Must Forget Its Past