It was a grin that changed the scope of the Marvel Cinematic Universe, a pleased acceptance at the declaration, “To challenge them would be to court death,” that invited fans both new and old to glimpse a sense of where the Avengers tale was heading. Thanos’ introduction in the midcredits scene of The Avengers (2012), and his pleased response to the inevitable showdown he would face against Earth’s mightiest heroes, laid the groundwork for Marvel’s following two film phases, leaving audiences to wonder what he has to smile about.

The task that this introduction created not only pushed Marvel Studios’ Kevin Feige and his stable of creatives to build toward this climactic event with each installment of this franchise, but it also provided Marvel Comics with the opportunity to reintegrate Thanos as a central player throughout its line of books. Marvel has taken the past five years to rebuild the character in a number of ways, including a new origin story in Thanos Rising (2013) and the crossover event Infinity (2013), from which Avengers: Infinity War borrows Thanos’ cabal of subordinates. Marvel Comics has also published the solo series Thanos (2017), which puts the Mad Titan through an emotional gantlet. At the same time, Marvel has retained the character’s core elements, as carefully constructed by visionary comic writer Jim Starlin. Ultimately, Marvel has taken all the necessary steps in order to make sure that by this weekend’s release of Avengers: Infinity War, anyone who desired to would know the name Thanos and the weight it carried. Josh Brolin’s depiction of the character in Infinity War thus becomes a fascinating synthesis of Marvel past and present in order to create the definitive version of the character.

In the modern age of comics, when the name Thanos comes up, it’s a sure bet that Marvel is about to embark on an event, but this wasn’t always the case. In 1973, Jim Starlin ushered in a new threat in the pages of The Invincible Iron Man No. 55. “My name, Iron Man, is Thanos!” says the purple-skinned alien who lacks the stature and musculature that would become defining features of the character in later appearances. His similarity to DC Comics’ Darkseid, who had appeared seven years earlier, is unmistakable. Starlin has made no secret of his inspiration from Jack Kirby’s tyrannical New God, but the character has become far more than a rip-off over the course of the decades, guided largely by Starlin’s hand. Thanos’ first appearance, which also saw the first appearance of Drax, feels somewhat silly by current narrative expectations, with Iron Man being forced to fight a robotic version of Thanos while the real version escapes in classic villainous fashion. But, the beauty of comics is that even in the quaint and trite, the seeds of sagas are planted. 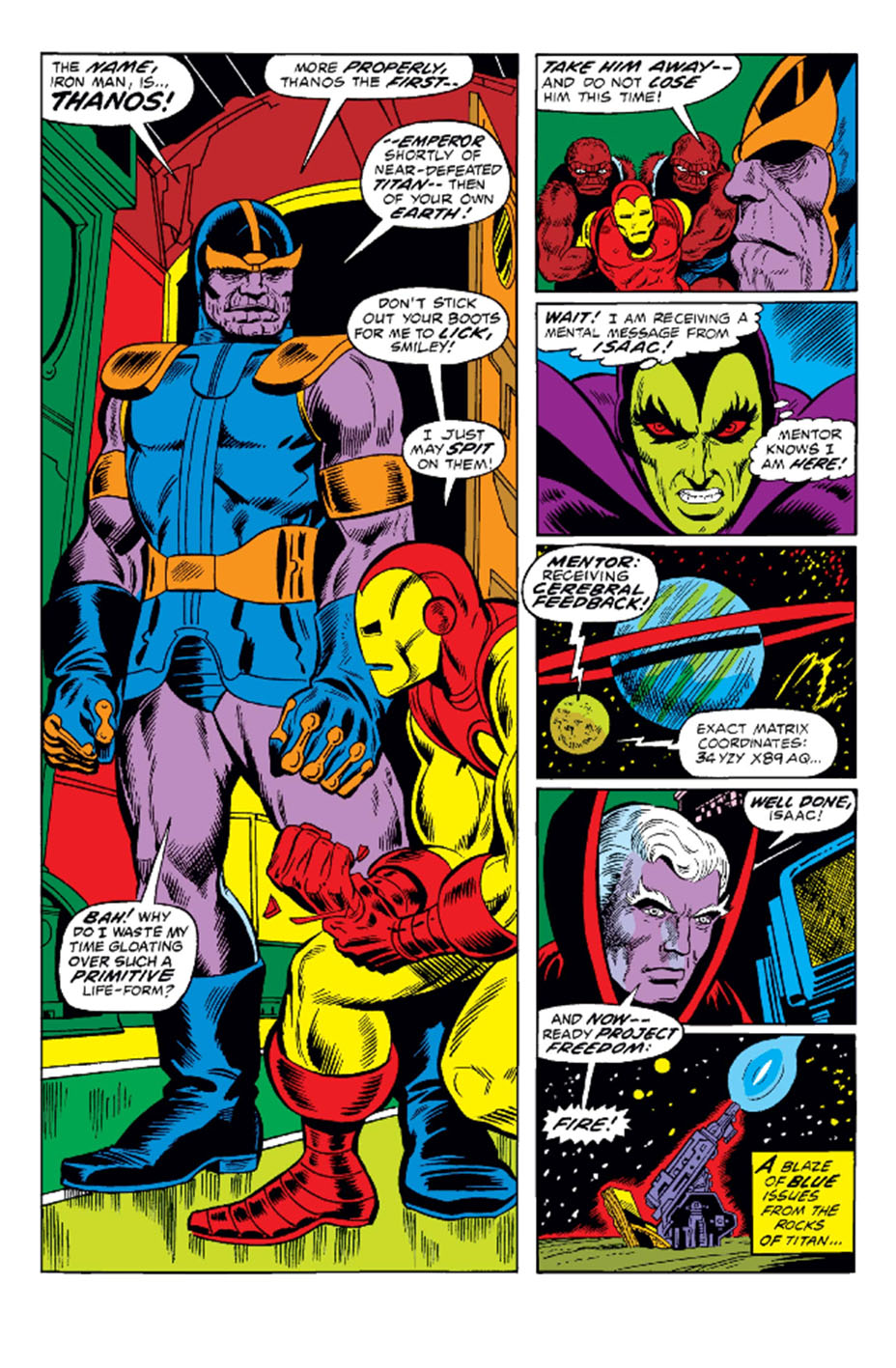 In hindsight, it is fitting that Iron Man should be the first Avenger that Thanos comes into conflict with in the comics, even if their relationship is vastly different from the one we see in Infinity War. Marvel Studios has built its cinematic universe around Robert Downey Jr.’s Iron Man, and while no one could have guessed the success that initial film would bring in 2008, Iron Man’s cinematic journey, and increasing anxiety about his own mortality and that of Earth, makes Thanos his perfect foil. The Russo brothers’s film explores the notion that Tony Stark and Thanos are two sides of the same coin, men seeking power to change the course of fate, whose efforts to avoid their visions of the future come with terrible prices. When Thanos reveals that he knows exactly who Stark is during Infinity War’s third act, the only Earthling he refers to by name, he tells Iron Man that he is “not the only one burdened with knowledge.” The fact that these two haunt each other, and stand in the way of each other’s ability to succeed as futurists perfectly harkens back to the fact that Thanos is originally an Iron Man supporting character, and additionally that this era of the MCU is ending where it began with 2008’s Iron Man.

Starlin would continue his Thanos epic across the stars in the books Captain Marvel and Warlock. While never top sellers like The Amazing Spider-Man, Uncanny X-Men or Fantastic Four, Starlin shaped what would become the cosmic side of the Marvel Universe through these books. Thanos’ quest for power in the form of the tesseract (the cosmic cube) was revealed to be a mating ritual to attract the attention of the personification of Death. His failures, at the hands of Captain Marvel, Adam Warlock and the Avengers, revealed him as fallible, able to be beaten by his own self-destructive nature through his inability to feel worthy of love. Starlin, who has never ceased to explore the subconscious and spiritual side of his characters, depicts Thanos as a romantic, caught in a Shakespearean tragedy where he as the central character can never move beyond the death gaze that “Alas, poor Yorick” entails. 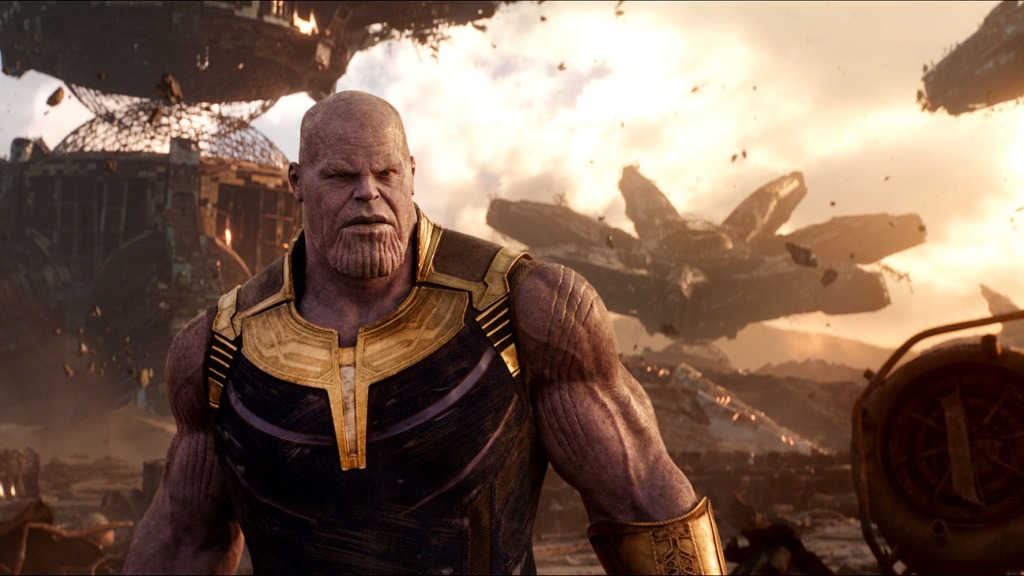 The Mad Titan, as Thanos would become known over the years, didn’t simply threaten and offer villainous cliches, he pontificated, and wondered about his own existence, the meaning of godhood and his role in the universe. While most current depictions of Thanos in comics such as Infinity and his eponymous series portray him with a Darth Vader-like personality of few words and ultimate evil sustained by unquenchable bloodlust, Starlin’s Thanos is a poet. Brolin’s portrayal borrows heavily from Starlin’s depiction, and Starlin, who has recently sung the film’s praises (despite having a complicated history with Marvel), received a special note of thanks for his many contributions to the film in the credits. Infinity War’s Thanos is serene, thoughtful, nearly monk-like in his consideration that balancing the universe isn’t a matter of genocide, but simple calculus. The Avengers and the Guardians of the Galaxy, in their efforts to save lives, only impede upon a necessity Thanos burdens himself with.

The Infinity Gauntlet (1991), considered to be the ultimate Thanos story, though far from the final act in Starlin’s saga, is at its heart a nihilistic love story about a man who would become a god and wipe out half the universe so that he could know love. In essence, he commits genocide to win the affections of the personification of Death. While Infinity War doesn’t present Death as a presence, and thus removes that love story, Thanos still sees his quest as a noble one. His efforts to balance the universe borrows heavily from the Infinity Gauntlet prequel, which ran through The Silver Surfer in a story collected as Rebirth of Thanos (1990), and the limited series Thanos Quest (1990). It is in these stories that we come to fully understand the depth of Thanos and his love for Death. With the knowledge that the universe’s limited resources ultimately means the death of all things, and subsequently a lack of new life means the end of Death’s existence, Thanos becomes the ultimate environmentalist. Like a hunter targeting deer, he sees his work as a means of population control, though he can’t deny the satisfaction that comes from the sport. Driven by a similar purpose in Infinity War, Thanos acknowledges that others will see him as a monster, while he in turn sees himself as the ultimate hero who is willing to do what no one else can or will.

Thanos’ transition from comics to film, and the evolution that has entailed, is a best-case scenario for adaptation. From a knockoff of a more popular character, to a deep cut villain on the other side of the Marvel Universe, to an event-level character who sells books and will undoubtedly break box-office records, it’s not death Thanos is courting, but increasing longevity through life. As joy and contentedness spreads across the Mad Titan’s face in the final shot of Infinity War, audiences finally know what he has to smile about.