Ten years ago, Marvel Studios gave audiences the first tease of the proliferation of costumed heroes that would arise as a result of Tony Stark (Robert Downey Jr.) becoming Iron Man. James Rhodes (Terrance Howard) looked up at Tony’s silver Mark II armor that would eventually serve as War Machine, and said, “Next time, baby,” an Iron Man line that not only promised a larger universe, but a universe where heroism belonged to more than white males. Ten years later, Marvel hosts a spectrum of heroes of different colors and genders, showcasing at the very least, a surface-level sense of diversity. Yet, something still feels amiss, still feels false in this presentation of representation, despite the success of Avengers: Infinity War.

Infinity War deserves all the praise and box-office success it’s receiving. Directors Joe and Anthony Russo bring in almost every significant character that’s been introduced over the past 10 years and manage to balance them in a way many believed they never could. But in watching the film, with all of its characters coming together, it is hard not to notice how much of the Marvel Cinematic Universe centers on the arcs of white guys, both narratively and emotionally.

They are great white guys — charming, well cast — and the viewer is made to feel for them regardless of their personal backgrounds, but they can’t help by draw attention to Marvel’s track record in diversity. Sure, sidekicks like War Machine (Don Cheadle, who replaced Howard in 2010’s Iron Man 2), Sam Wilson/Falcon (Anthony Mackie) and Wong (Benedict Wong) are present and given a few quips and some solid action beats. Aliens played by people of color in the forms of Mantis (Pom Klementieff), Drax (Dave Bautista), and Groot (Vin Diesel) are each given their time to shine, with Gamora (Zoe Saldana) having the most notable role on this front. And Black Widow (Scarlett Johansson) and Scarlet Witch (Elizabeth Olsen) are scene stealers in their action sequences. But Marvel’s release of Black Panther earlier this year has changed the perception of things by hitting highs that make us more aware of some of Marvel’s flaws when it comes to really seeing the characters who fill our screens.

Before Black Panther, seeing representation in the form of sidekicks and supporting characters was cause for celebration itself. It was just something to be seen and counted. Ryan Coogler’s film made major strides for blacks and women, presenting characters who had rich interior lives, whose race and gender were embedded in their experiences across the moral spectrum. In the aftermath of that film’s incredible success, we’re left to wonder if there’s something more that these characters who fall under Marvel’s umbrella of diversity can mean, beyond simply their ability to show up and look cool. With three films (Ant-Man and the Wasp, Captain Marvel and Avengers 4) remaining in this chapter of the MCU, Marvel still has a shot to make good on the promise of representation and Infinity War, while making us aware of an emptiness in characterization in some regards, also makes a few noteworthy steps toward forward motion when it comes to representation. 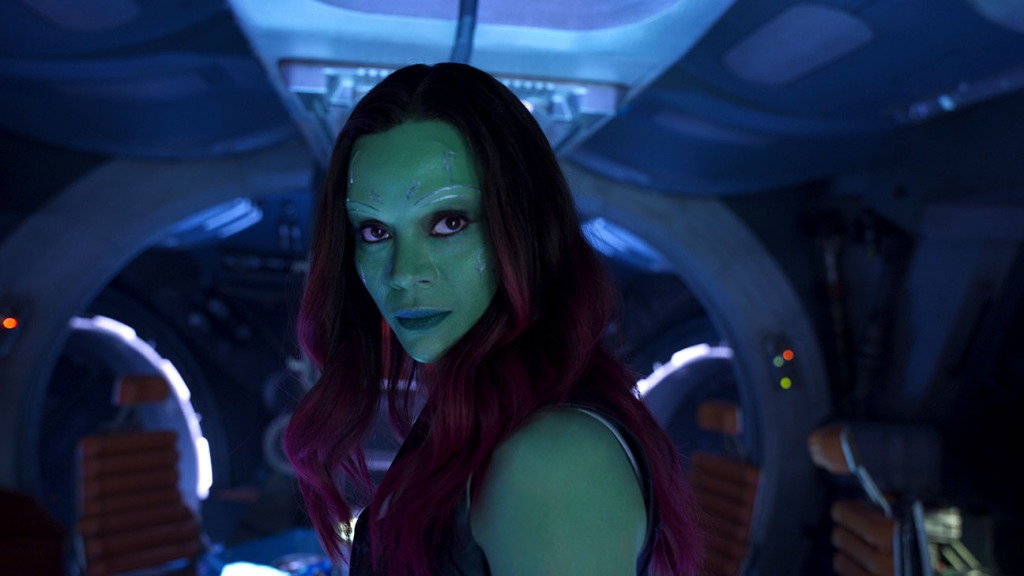 One of Infinity War’s strongest arcs is Gamora’s, who is forcibly reunited with her stepfather Thanos (Josh Brolin) and has to come to terms with her complicated feelings for him. While her alien heritage doesn’t exactly do anything for race in terms of the in-film narrative, despite Saldana’s casting, Gamora does become the most complex female figure in the MCU. In her willingness to save the sister Nebula (Karen Gillan) who’d been made her enemy, to ask the man she loves (Chris Pratt’s Peter Quill) to kill her, and to come to terms with the fact that her hatred for Thanos is also mixed with love, and even admiration, we’re allowed to witness a hero’s journey that is punctuated by a shocking end, one that is focused on her emotional experience.

Furthering Infinity War’s interest in the heroism of women is Scarlet Witch, who, while in part defined by her relationship with Vision (Paul Bettany), manages to define herself as the Avengers’ last hope, with Vision kept in the damsel in distress role. While Infinity War isn’t exploring womanhood to anywhere near the degree that Black Panther explored race, there is something profoundly satisfying about watching Black Widow, Scarlet Witch, and Okoye (Danai Gurira) team up to take on Proxima Midnight (Carrie Coon), and it increases hopes for the rumored female Avengers movie that could with any luck properly explore the roles of powerful women in a male-dominated society. Arguably, Infinity War’s interest in female heroes, with the exception of Gamora, is ancillary to the male heroes bearing the weight of the film, but with Ant-Man and the Wasp (July 6) and Captain Marvel (March 6, 2019) promising a larger role for women in this universe, beyond love interests, the hope remains that by the time the fourth Avengers film rolls around next year that they’ll have just as much impact on the story as the men have thus far. (In another step for representation, Marvel is also working on finding a female director for a Black Widow solo movie.) 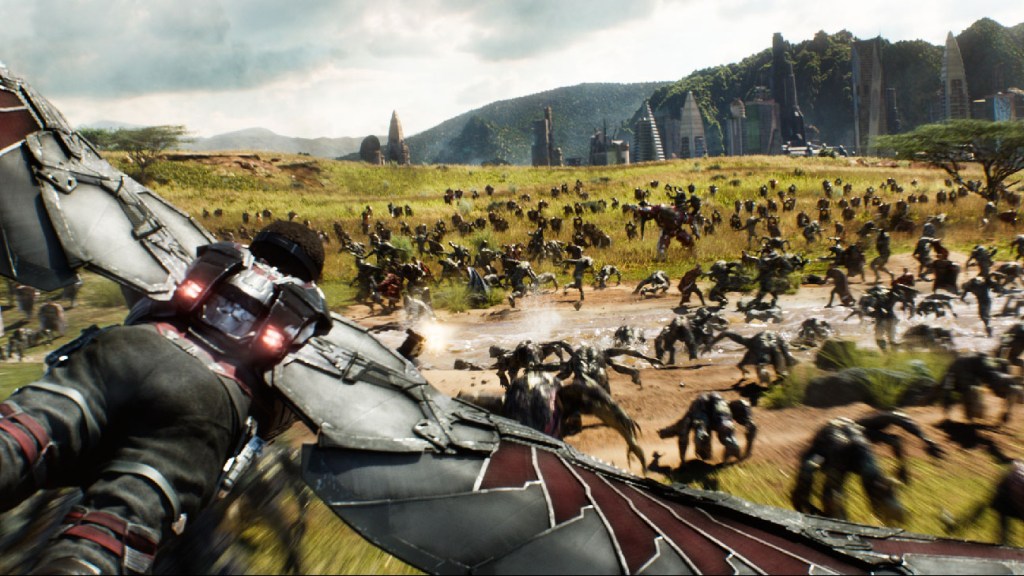 When it comes to race, Infinity War has too much on it plate to delve into questions of why the Wakandans are serving as battle fodder for Thanos’ thralls while the U.S. military remains uninvolved. And from a more intimate perspective, James Rhodes and Sam Wilson’s race was never explored in any of the previous films in a way that allowed them to explore how they feel about being subordinates to the most powerful white men on Earth, or how they see themselves and their heroism in a world where slavery and the civil rights movement were still issues, despite the existence of gods and heroes. While it’s entirely plausible that these aren’t questions that supporting characters can be tasked with outside of receiving their own solo films, it is also evident that Black Panther managed to do so with everyone from T’Challa (Chadwick Boseman), Killmonger (Michael B. Jordan) and Nakia (Lupita Nyong’o) to M’Baku (Winston Duke). Perhaps it comes down to the race and social experiences of the filmmakers and screenwriters behind the film. But from a black perspective, it feels like a significant oversight for Rhodes and Wilson not to at least comment on what it’s like to be in the most advanced civilization in the world, and one that’s entirely controlled by black people.

The final few films of this phase of the MCU will never be able to tackle all of these issues of representation, and they shouldn’t be expected to entirely make up for Marvel’s late start on this front. But there should at least be a recognition that Black Panther has changed what these films are capable of, that beyond blacks and women, there are entire groups of people, across races, cultures, and the LGBTQIA communities who deserve, if not a Black Panther of their own, then at least a chance to see themselves presented on screen. Presented not just as bodies ready to show up, but as personalities shaped by the socio-politics that keep this world moving, or in some cases hold it back, and as minds who are always aware of their place in the world as minorities. They’ve shown up as audiences, now it’s time for Marvel to allow them to truly show up in their films. While it may not happen this time around, next time, baby we’re going hold Marvel to the standards that their representation should be just as infinite as their storytelling.