In 2012, writer/director Joss Whedon basically pulled off an impossible magic trick by bringing together disparate superheroes into a combined film, The Avengers. But the real magic trick, the one that the Marvel Cinematic Universe has built to for a decade, is bringing together a vast group of good guys who are separated by cities, countries and planets. By now, we know that Iron Man, Captain America, the Hulk and Thor can coexist in the same film and still feel distinctive. The most pleasant surprise about Avengers: Infinity War is that the film’s directors and writers are able to bring together even more good guys without losing their specific voices.

The biggest test for directors Anthony and Joe Russo, and writers Christopher Markus and Stephen McFeely, had to be the quintet of heroes who previously had no interaction with the Avengers, to the point of not realizing they even existed. That, of course, would be the Guardians of the Galaxy, who first enter Infinity War as they discover the aftermath of Thanos’ vicious attack on the ship full of Asgardians from the end of Thor: Ragnarok. Even before they pick up that attack’s sole survivor, Thor, the Guardians all feel like they’ve been brought to life again by the wit and ingenuity of James Gunn, an executive producer on this film. Chris Pratt, Zoe Saldana, Dave Bautista, Bradley Cooper and Vin Diesel all get a substantial amount of material here — it’s hard to say any one is a main character, but they almost certainly have as much screen time or more than some of the original Avengers — and it feels very true to who they were in their own films.

A slightly disappointing flip side is the way that Black Panther, aka King T’Challa, and other Wakandans are treated in Infinity War. Perhaps it’s because the most recent MCU movie was Black Panther, and that a good chunk of the second half of this movie takes place in the previously hidden African nation. But while it’s satisfying to see Chadwick Boseman, Danai Gurira and Letitia Wright onscreen so soon after Ryan Coogler’s film, they’re all in a sadly minimal amount of Infinity War.

(To reiterate the earlier warning, spoilers ahead.) 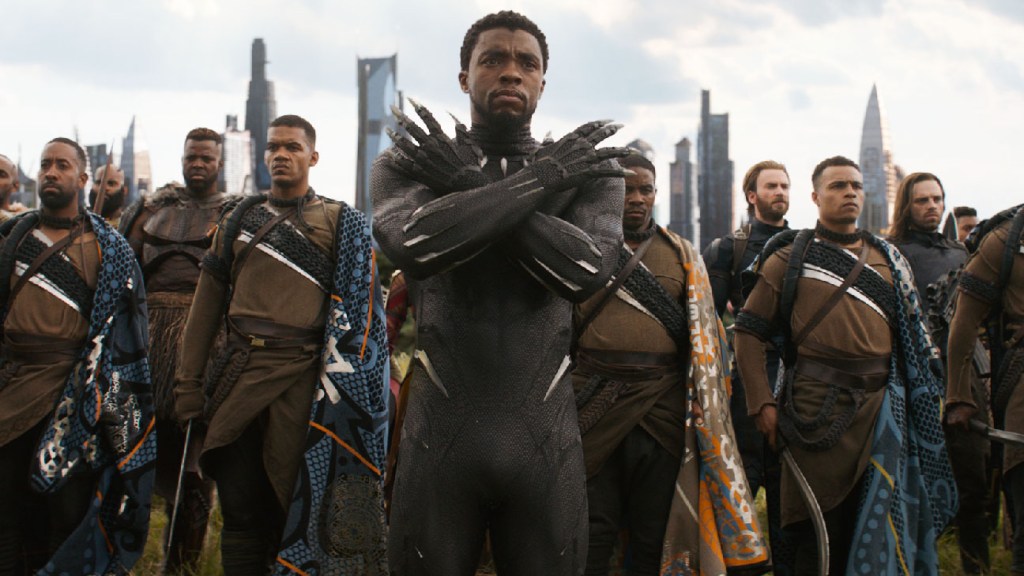 Wright’s Shuri, for example, gets one brief moment of levity as she tries to help out the heroic robot/human hybrid Vision extract the Infinity Stone from his body, but is otherwise mostly absent from the film. Even Boseman only gets a couple minutes of screen time — while it is surface-level shocking that Black Panther is among the heroes killed by Thanos in the final moments, it’s almost that much more of a letdown that he’s barely in the film at all.

Part of this is less a comment on the failure of the film to capture everyone’s distinctive personalities, as much as it a necessity of making a 150-minute film with so many characters. Some previous characters aren’t even in this movie: Black Widow briefly mentions that both Hawkeye and Ant-Man won’t be appearing here. And the major characters of the Russos’ previous MCU films don’t have that much to do here either: though his arrival is rousing, Chris Evans’ Captain America isn’t in much of Infinity War, nor are Sebastian Stan’s Bucky Barnes or Anthony Mackie’s Falcon.

It is very much to this film’s credit that those heroes who do have a lot of screen time feel of how they’ve appeared in previous films. Though Chris Hemsworth’s Thor had a very drastic personality shift from the first Avengers to this one, the actor’s deadpan comic timing is put to good use and the decision to team Thor up with the Guardians of the Galaxy is particularly inspired. It’s equally clever to have Tony Stark spend a large part of Infinity War with Doctor Strange, the two similarly designed heroes butting heads as they figure out how to deal with the threat of Thanos. (Plus, putting two recent Sherlock Holmes performers together feels like a sly, deliberate choice.)

Avengers: Infinity War doesn’t work the whole time, but when it does, it’s because Anthony and Joe Russo and the writers were somehow able to balance the weightier themes of the film’s villain with the singular personalities of the heroes trying to fend him off. When the Guardians of the Galaxy first appeared in the MCU, they were a breath of fresh air. In the four years since their first film, a number of other MCU movies have felt surprisingly, pleasantly distinctive in the same vein as Guardians. With other directors and writers involved, it might have been right to wonder if the unique heroes of the Marvel Cinematic Universe could come together in one film that captures their styles without feeling jarring or overstuffed. Mostly, Infinity War is at its best when letting the characters interact with each other, not feeling like pale copies of themselves.

To Save the Future, Marvel Studios Must Forget Its Past