The first trailer for Avengers: Infinity War is out, offering teases of what to expect from the future of the Marvel Cinematic Universe — and raising all kinds of questions about what’s about to come next. Here are the clues and queries we noticed while Thanos was having fun destroying the planet.

0:03: “There Was An Idea …” Everyone is quoting Nick Fury from the first Avengers movie in this opening group monologue: “There was an idea, Stark knows this, called the Avengers Initiative,” he explains at one point in the movie. “The idea was to bring together a group of remarkable people, see if they could become something more. See if they could work together when we needed them to to fight the battles we never could.”

0:09: The Man Who Fell to Earth Well, now we know how the Hulk returns to Earth — but how does this match up with the post-credits sequence from Thor: Ragnarok? And is it a coincidence that the Hulk apparently lands in Doctor Strange’s Sanctum Sanctorum? (You see the hole he made in the stairs at 0:46.)

0:17: I’m a Real Boy Now That’s the most human-looking the Vision has appeared yet. Has he got an upgrade, or is this a new facet of what the Soul Stone can do for him?

0:26: Assembling in Wakanda Bruce Banner stands humbly beside the hand of the Hulkbuster armor, with Wakanda in the backdrop. The rest of the trailer shows lots of action in the Black Panther’s nation, so it only makes sense that this is where Earth’s Mightiest Heroes have their reunion … but why Wakanda?

0:27: Blonde Widow No, really: What’s with Natasha’s hair? It’s not as if Scarlett Johansson hasn’t worn wigs for the role before, so presumably there’s a narrative reason for this change of look. So what is it?

0:46: Does Whatever an Iron Can The trailer’s second glimpse of Tony Stark shows him more proactive than the initial shot of him weeping at the very opening of the trailer. Looks like he’s responsible for picking up Banner from the Sanctum Sanctorum — perhaps because he was left in charge of the world’s superheroes at the end of Captain America: Civil War — but also that he’s looking as if the responsibility is continuing to wear on him.

0:52: Spider-Sense! Sure, the hairs standing up on your arm might be miles away from the comic book tradition of flashing the Spider-Man mask on half of Peter Parker’s face when he’s sensing danger, but still: We all understood what was happening immediately, didn’t we? 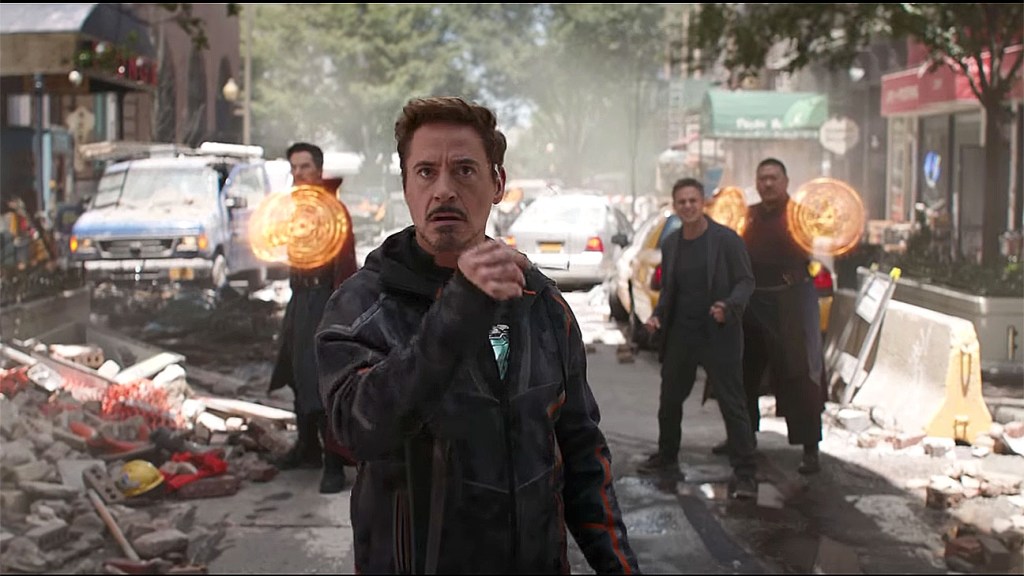 1:02: Freeze! What, if anything, should be read into the fact that Doctor Strange, Wong and Bruce Banner don’t appear to be moving even slightly as Tony Stark steps forward? Unfinished special effects, or is there something else happening here?

1:06: Where in the World Is the Trickster God? The Hulk has shown up on Earth, but Loki is apparently walking through destruction (and bodies) while holding the Tesseract — which is, of course, one of the Infinity Stones that Thanos is looking for. He picked it up from Asgard during Thor: Ragnarok, presumably setting in motion that movie’s post-credit sequence, but where does this leave him as Infinity War opens?

1:16: New Spider-Man Peter has upgraded his costume, it seems. It’s the outfit offered by Tony during Spider-Man: Homecoming, which just so happens to bear a resemblance to artist Alex Ross’ version of the costume the hero wore during the All-New, All-Different Marvel comic book era.

1:23: “Get This Man a Shield” Steve Rogers, of course, quit as Captain America at the end of Captain America: Civil War, returning the costume and the shield in the process. (Fortunately for Steve, Wakanda is where Vibranium is from.)

1:41: That’s Going to Leave a Mark Notably, at least two characters are standing around the Vision as someone attempts to forcibly remove his Infinity Stone, which suggests that Thanos is sending his Black Order out to collect the stones, instead of doing it himself. (This shouldn’t come as too much of a surprise; he did something similar in the first Guardians of the Galaxy with Ronan the Accuser.)

1:43: And That Makes Three Worth noting that the Vision’s Infinity Stone is golden, while the two Thanos has on the Infinity Gauntlet are blue and purple — blue is the Tesseract, right? Now we know what happens to Loki’s stone, if nothing else — meaning that he’s going to make it at least 3/5 of the way to completing his quest in the movie. 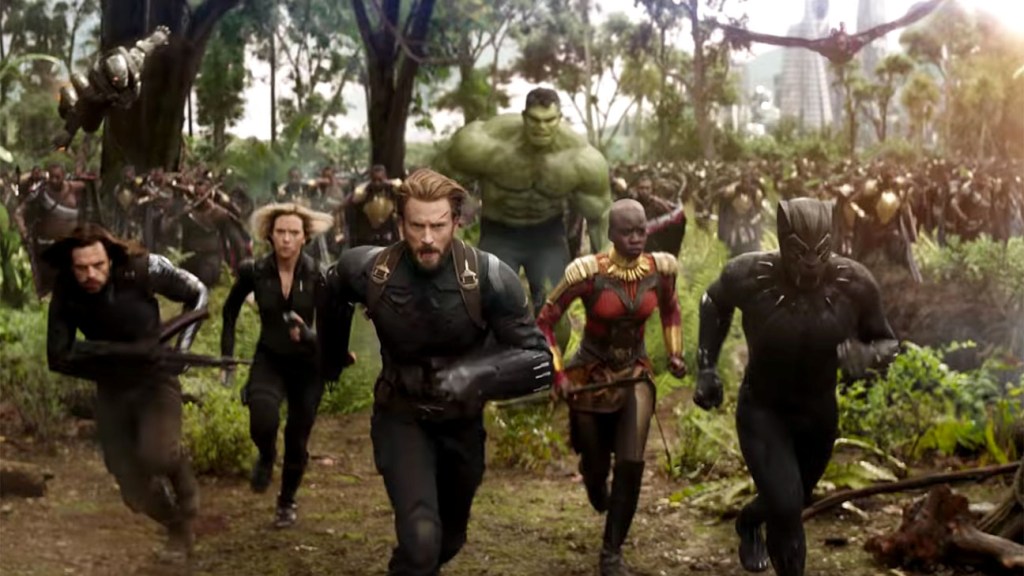 2:00: Avengers 3.0? It’s worth noting who’s present in the money shot ahead of the title: Steve Rogers, the Winter Soldier, the Black Panther, the Black Widow, Shuri, the Hulk, the Falcon and War Machine. Where are Iron Man, Spider-Man and Doctor Strange, who are part of the conflict on Earth? New York? Yet there’s a Hulkbuster in action in Wakanda, as glimpsed in the trailer … but perhaps that isn’t Iron Man, for some reason. Also, sad to notice that no-one got Steve a shield when the Black Panther asked earlier.

2:17: The All-New Guardians of the Galaxy It took an entire trailer for Thor to show up, and here’s why: While everyone else seems to be assembling on Earth, he’s apparently still in space, and teaming up with the Guardians of the Galaxy, including Star-Lord’s new mustache. Maybe Marvel can digitally paint that out in post. I hear that’s all the rage now.