Continue to The Hollywood Reporter SKIP AD
You will be redirected back to your article in seconds
Skip to main content
April 27, 2018 2:00pm
Logo text

Sure, it’s taken Thanos six years between 2012’s The Avengers and this week’s Avengers: Infinity War to put his plan for universal domination into full swing. But he wasn’t taking it easy for all that time — at least part of it was spent putting together the Black Order, a team of deadly minions who’ll do his every bidding … as long as it’s violent and includes messing up a good guy or two along the way.

Movie audiences may not be familiar with the new Avengers antagonists, so let’s take a closer look at the origins of The Black Order — and examine some of the tweaks that were made for the film. There is one very important difference: the movie versions are also called the Children of Thanos which, if taken literally, would mean that both Gamora and Nebula of the Guardians of the Galaxy are their sisters. In the film, survivors of Thanos‘ massacres are also called Children of Thanos.

The Black Order is a relatively recent addition to Thanos’ comic book mythology, making their debut in 2013’s New Avengers No. 8, as part of the “Infinity” storyline that ran through all of Marvel’s line at the time. As originally introduced, the Black Order were essentially Thanos’ enforcers, a group of aliens whose loyalty to their boss was only rivaled by their ruthless efficiency in carrying out his orders. (Said orders basically consisted of helping Thanos to invade planets and either subjugate those living on them, or simply kill them; for a group of intergalactic psychopaths, it wasn’t the hardest job in the universe.)

As part of “Infinity,” the Black Order attacked Earth and caused havoc for the world’s superheroes, proving just how big of a threat they could be. Notably, the Order fought individually, as opposed to as a team, with each member proving more than enough to handle multiple superheroes at once. In case that wasn’t enough of a hint as to how terrifying they could be, a later appearance would see them teamed with Hela, the Goddess of Death movie audiences know from Thor: Ragnarok, holding their own as they assisted her in attempting to steal an alternate universe Mjolnir.

Not all of the comic book Black Order made the jump to the big screen, curiously enough; of the five original members of the group, only four show up in Avengers: Infinity War, with Supergiant — a telepathic alien who, despite her name, isn’t particularly large at all — being entirely absent. She was, however, killed by Lockjaw, the Inhumans’ dog, in the comics, so perhaps a lack of cinematic fame is the price she pays for being defeated by an overgrown puppy.

With minor spoilers to follow, the four who do appear in the upcoming movie are… 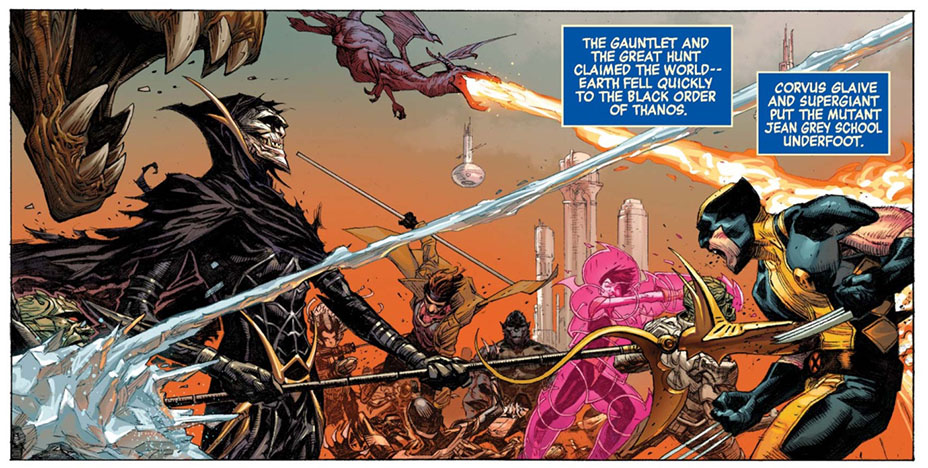 One of the Black Order most trusted by Thanos, Glaive — in addition to being immortal as long as the blade of his weapon is in one piece — is a demonstration in just how bad a judge of character Thanos actually is; he went behind Thanos’ back when the latter was missing, forming his own version of the Black Order to try and create his own empire. When Thanos discovered what had happened, Glaive actually committed suicide with the shattered remains of his own weapon in an attempt to escape punishment. Michael James Shaw plays him in the film, turning out to be a particular thorn in Vision’s side. Or, more specifically, right through his torso, on more than one occasion. 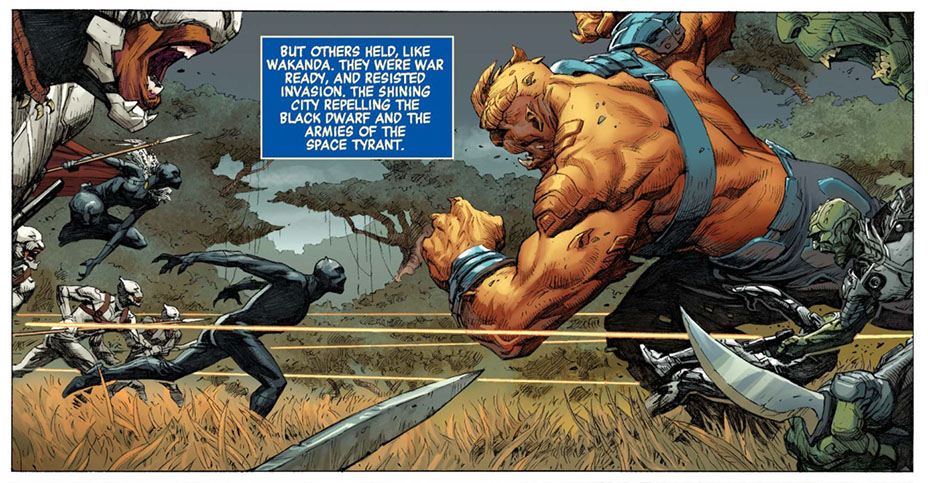 Seemingly invincible, Black Dwarf is the brute force of the group, looking like the alien version of a fantasy barbarian and favoring weapons like a mace and an axe to get the job done. Not only one of the less strategic members, he’s also one of the most unsuccessful, at least in the comic book mythology, where he was simultaneously beaten back from his attempt to invade Wakanda before getting killed by Ronan the Accuser while failing to protect a captured space station from liberation. (You may notice multiple members of the Black Order have died; they’ve all since been revived, thanks to comic book logic.) Renamed Cull Obsidian for the film  — an alternate name for the group itself in the comic books  — he’s the oversized threat that faces off against the Hulkbuster armor, and is played by Kong: Skull Island‘s Terry Notary. 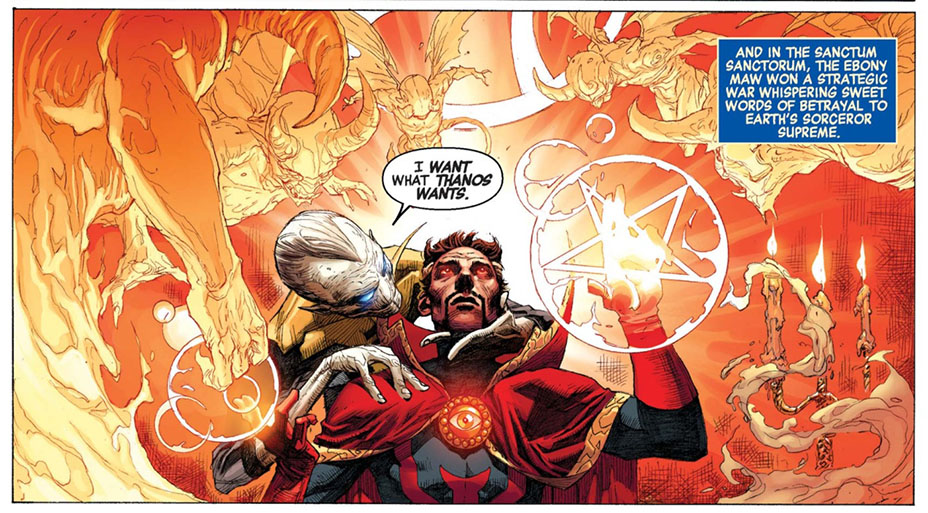 If Maw’s name doesn’t exactly inspire dread, the character himself is likely to. A genius and master manipulator, Ebony Maw also possesses unusually strong powers of persuasion, in addition to having the ability to teleport, which probably comes in handy when people discover just what he’s convinced others to do for him and he fancies a quick exit. Who is most likely to turn one of the Avengers into a traitor, just for the evil fun of it? That’ll be this guy, played by Tom Vaughan-Lawlor in the film, where he finds himself pre-occupied with Doctor Strange and the question of how to get his hands on the Time Stone. 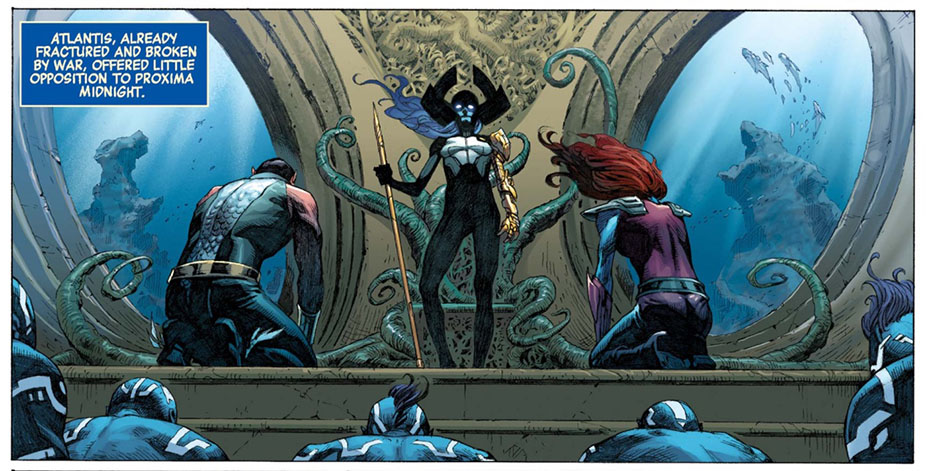 In addition to rocking the most metal name of the entire group, Midnight is arguably the most deadly of the Black Order (she’s played by Carrie Coon in the film).  A skilled hand-to-hand fighter, she also has a lance that she’s fond of using — understandably, considering it can transform into lasers on command. As with other members of the group, she’s also been killed at least once in comic book continuity, although she can at least boast a fine choice of murderer: Hela herself. Onscreen, she proves to be a match for each of the Marvel Cinematic Universe’s heroines, with her fight with Black Widow and Okoye being one of many highlights of the film.