Captain America will be no more in Avengers: Infinity War, but don’t get too worried just yet.

Directors Joe and Anthony Russo confirmed in an Instagram post this month that Steve Rogers (Chris Evans) will be spending this Avengers movie using the codename Nomad, an appropriately ominous name for a more rough-and-tumble version of Captain America.

Beyond the new, gritty on-screen look, the whole idea of Nomad carries with it historical weight in Captain America’s mythology — and reveals a few clues about the direction things might go for not just Steve, but for Marvel Cinematic Universe characters like Bucky Barnes (Sebastian Stan) and Sam Wilson (Anthony Mackie) who have spent the last several films in Cap’s orbit.

Nomad’s original comics incarnation was an extremely brief endeavor. Lasting only four issues in total, Steve gave up the shield (for only the second time in Cap’s long history) in the ‘70s following the thinly veiled Watergate allegory story arc known as Secret Empire. Steve uncovered a conspiracy in the U.S. government that reaches all the way to the Oval Office that forces him to confront the fact his idealism for the American Dream might not be all it’s cracked up to be. Despondent, he resolves to cast aside the identity of Captain America all together, shield and all, and become Nomad, the Man Without a Country.

On paper, that Nomad story sounds just as existentially fraught as Evans’ new, bearded look in Infinity War, but it really wasn’t. The original comics Nomad wasn’t really a mournful action hero questioning his purpose; he more closely resembled a cartoon character slipping on a banana peel. Steve made his own costume by hand (yes, including a deep, deep v-neck), and professed his long-held desires to have a uniform with a cape.

He then proceeded to trip himself on the cape almost immediately while trying to thwart some criminals. The local police got in his way, not understanding that Nomad was actually the new Captain America. By the end of his four-issue stint, Nomad was all but doing a Looney Toons bit. 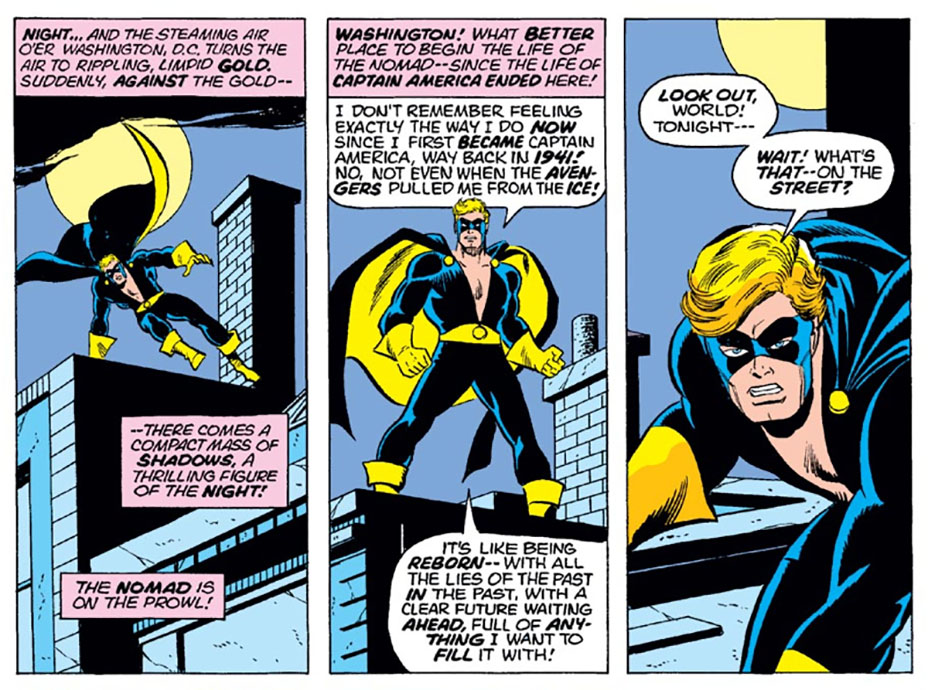 The events that prompted Steve to return to his life as Captain America weren’t quite as goofy, however. In Cap’s absence, pretenders to the mantle began to trickle in. Fake Captain Americas started trying to do their best to fill the void Steve left behind and in the process, got themselves critically wounded — or, worse, killed. The guilt became too much for poor Nomad to bear … and the near constant humiliation of trying to make this new identity viable probably didn’t help, so Steve retook his shield and stepped back up to the plate.

So what does this story reveal about the next Avengers movie?

Don’t expect to see physical comedy or camp in Infinity War, and (tragically) there will be no deep-v costume or cape or otherwise. But here are bits and pieces of the original Nomad story that just might be pertinent to the MCU — specifically, what it has to say about a world without a Captain America.

The reality of Evans’ departure from the MCU all together is growing more and more inescapable. The actor has said he plans to retire as Captain America following 2019’s fourth Avengers, and Infinity War’s ominous marketing has featured prominent scenes of Cap in mortal peril. He may die or he may just retire, but either way, it’s hard to deny the fact that Steve Rogers’ time in the MCU’s spotlight is drawing to a close.

But, as the original Nomad story argues, a world without a Captain America just invites new Captain Americas, and the MCU certainly has a couple potential new Caps in the mix. 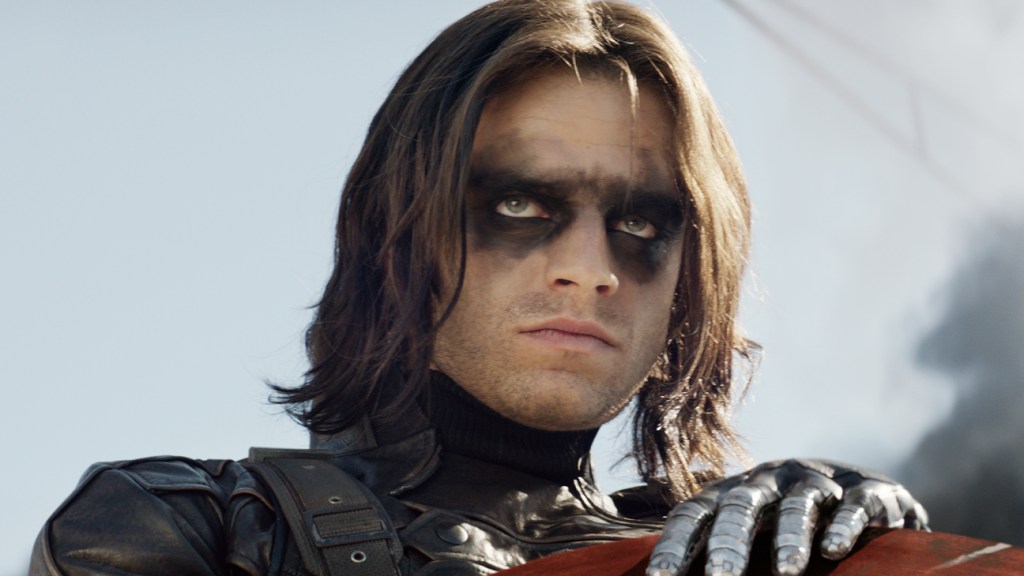 The first and most obvious successor is Bucky Barnes, currently the Winter Soldier, and Cap’s old right-hand-man from his World War II days. In the comics, Bucky took up the mantle after Steve was “killed” (he got better, don’t worry) in the aftermath of the Civil War storyline. While Steve didn’t die in the MCU’s rendition of the same storyline, an on-screen promotion for Bucky would certainly feel appropriate nonetheless. Even more, in each of Bucky’s three MCU outings to date (The First Avenger, The Winter Soldier, and Civil War) there have been pointed scenes of Bucky taking up the shield, however briefly (The Civil War scene wound up in the Blu-ray extras.)

Now, with Bucky having been cured of his brainwashing and well on the path back to heroism care of Shuri (Letitia Wright) in Black Panther’s post-credits scene, it feels like the next phase of his story is imminent — and it absolutely wouldn’t be a surprise to see him pick up the mantle in Steve’s wake. 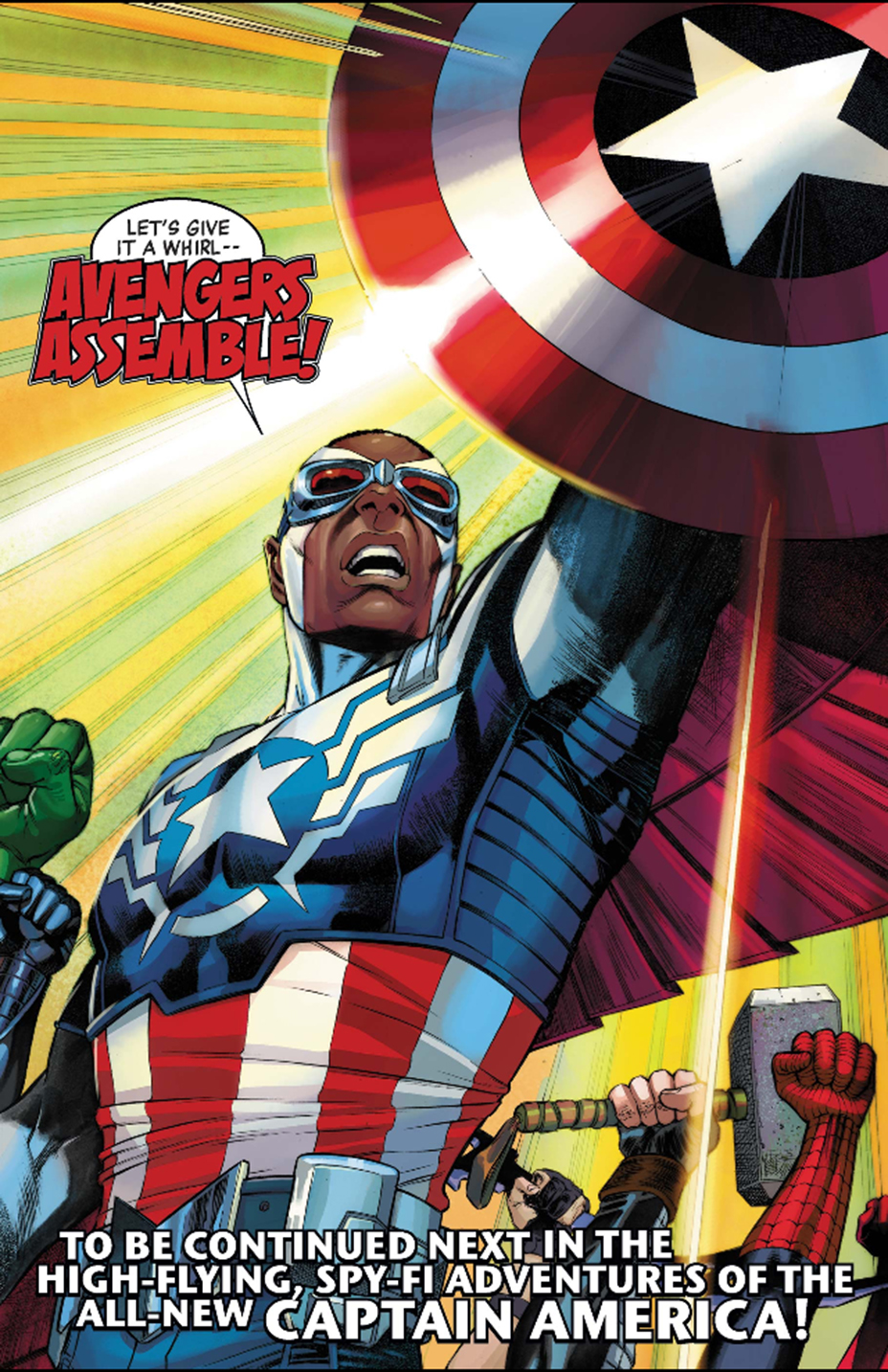 The second most probable replacement is Sam Wilson, the current Falcon. Introduced in The Winter Soldier, Sam has spent the past two Captain America films as Steve’s modern day right-hand-man and best friend. This tracks with his comic history as well, where Sam spent decades as Steve’s superheroic counterpart. For a time, the regular Captain America title was even known as Captain America and The Falcon as they worked as a duo exclusively.

For all their time spent together, however, Sam didn’t take up the shield until very recently in the comics. It happened in in the comics in 2014, after Steve suffered an unfortunate incident that caused the super serum in his blood to fail and age him up to his biological 90-plus years. As an old man, Steve obviously couldn’t handle all of his duties anymore, so he appointed Sam as his official replacement. He continued to serve in the role, even after Steve returned to normal, until just this last year.

There have been fewer hints for a Captain America turn for Sam onscreen, but the possibility is definitely there. In fact, both Mackie and Stan have confirmed their desire to continue with more solo-oriented Marvel movies if the opportunities are presented to them, so the chance is anything but off the table.

Regardless of who winds up taking the shield in the end, the reality is that someone is going to have to. Nomad represents the next stage for Steve Rogers, but the world will always need a Captain America.

How 'Avengers: Infinity War' Is Selling the "End Is Near" for a Neverending Series