Things are coming to a head in Gotham City.

DC’s primary Batman comic book is approaching the 75th issue of its current run, and as it moves toward that landmark, writer Tom King continues to deconstruct the Dark Knight in a manner unlike anything he’s ever faced before.

The 75th issue, scheduled for release in July, launches the “City of Bane” storyline. That it deals with Batman’s heartbreak in the wake of being left at the altar by Catwoman, and his inability to actually deal with that, should give some indication of how unusual King’s Batman is — no surprise, perhaps, from the writer of the critically acclaimed (and award-winning) Mister Miracle comic book series that ran from 2017 through 2018.

King has spoken many times about his run going just past the 100th issue, and he teases the character will not be the same after he is done with him.

“It’s something that’s going to change the character for a generation, or maybe more. Maybe forever,” he tells The Hollywood Reporter. “I never thought we’d get this kind of stuff approved; when you’re working with a corporate character, you think you’re going to have to reset. But this is a change that’s going to shake the world of Batman and it’s going to leave my mark on the character.”

As the Batman heads toward what what might be one final breakdown in the current storyline — this week’s Batman No. 71 continues the “Fall and the Fallen” storyline, which started in the previous issue — THR spoke with King about how to break the Bat, and what happens after that.

Preparing to talk to you, I re-read issues 51 through 71 in one sitting, and doing so, it’s so clear and compelling what you’re doing in this chapter of your run: You’re unpicking Batman. Everything since the wedding has been working toward unpicking the idea of Batman. Which is really cruel, Tom.

Where he is now as a character, especially with what happened in the “Knightmares” arc where he has to confront a number of things that he’s been hiding from, in a series of dreams — it feels more unsettling to read, knowing that there’s worse to come before we get to “City of Bane” in No. 75.

To me, the “Knightmares” arc was the most important one, perhaps of the whole series. That’s where we sort of untethered Batman, in a sense. We took away his defense. The one thing about Batman is, he doesn’t doubt that his cause is just in the moment. The end of “Knightmares” — the revelation that he was almost happy, he almost achieved that, but it was his vow [to avenge his parents’ death] that kept him from that — that, to me, is, “Now he’s vulnerable.” Now he has doubt.

It makes me wonder where “City of Bane” is going. You’re stripping Batman of everything he understands about himself, but at the same time, right there in the promo image No. 75 is Psycho Pirate, a character whose powers allow him to manipulate people’s emotions.

One of the things that’s so fun about what you’ve been doing is that there are so many mysteries in the book right now. There are things to be solved: Why and how has Thomas Wayne seemingly returned from the dead? What is the Psycho Pirate doing out there? It feels fitting for a story starring someone described as the “World’s Greatest Detective.”

Look, Batman’s the ultimate hero in fiction. He solves every crime; you can’t just come at him with one simple thing. A plan to defeat Batman has to be layered; you have to be six steps ahead of him, because he’s already five steps ahead. So that’s why it’s so layered. Batman defeats Bane with a head-butt [in the 20th issue of King’s run], but no — because that doesn’t work.

That layering, the idea of the mystery you can’t solve, is at the heart of things. He has to realize what makes him strong. I think in most Batman fiction, they tear him down physically, and he’s like, “OK, but I’m still sad about my parents, so I’m going to come back and punch you in the face.” That’s 90 percent of Batman fiction — and some of the best Batman fiction, Batman stories that I love — so the idea is, what if we take that away from him? 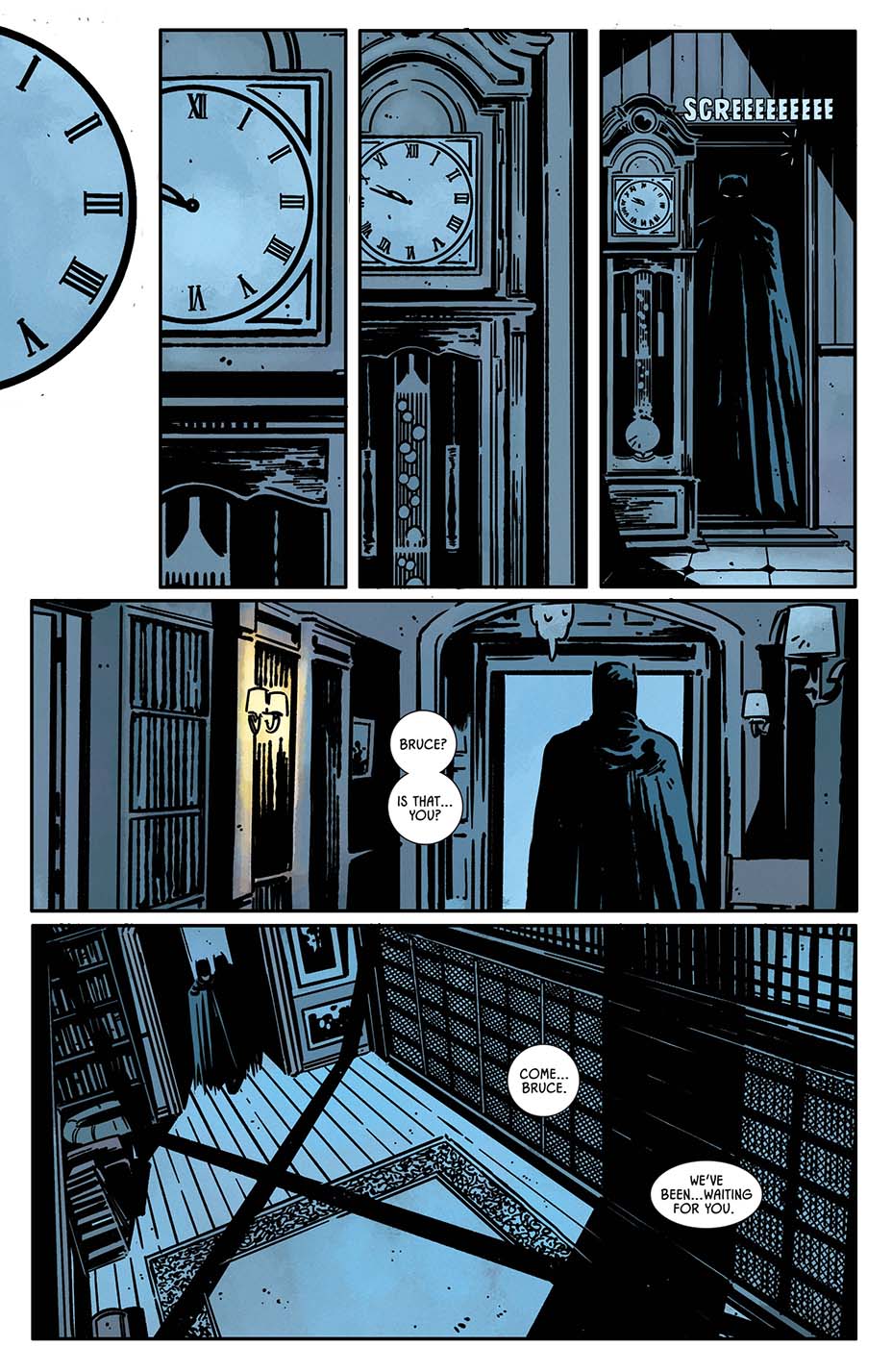 The current storyline, “The Fall and the Fallen,” shows us the Batman that you’re talking about, who will keep coming and keep fighting no matter what, and it shows us the limits of that.

Yeah, that’s exactly what it’s about. He comes out of the dream and is basically, “That’s it! I’m just gonna punch people until I win!” And Bane is ahead of him; you’ll see in issue 71, he’s expecting that, he’s planned for it. He knows that there’s a limit to that.

You said that Bane had to be six steps ahead of Batman, but you’re the one who’s planned all of this out. You’re at a point where three-quarters of your run is almost out there. What does that feel like? You’ve continually gone against expectations, with the wedding, with this new arc. What’s it like when so much of your plan has been revealed?

I feel like I should say relieved and wonderful, but I think nervous is more honest? (Laughs.) I have to make this work. I have to make this ending. A lot of people have invested a lot of time in this story. I just feel responsible. People have been paying, first $2.99, then $3.99 an issue for three years; I want that investment to pay off. That’s the most generous gift people have given me, and I owe them an ending that’s worthy of that. Mostly, I feel pressure. I hate to admit it, but that’s it. I gotta do it. I have to finish this.

Is there any sense of pride? I ask because I think you have made people see Batman differently through your run, and we’re talking about an 80-year-old character. That’s pretty special.

I mean, I have pride in certain moments. I love the end of the second annual. I love issue 37, where they go on a date. I love the Batman/Catwoman interactions in issue 44. There are certain moments I have pride in, but the whole run, I can’t see it that way. I’m in the middle of a battle, and I should take pride in the first three-quarters of it? I do that, and I’ll get slaughtered in the next three minutes. I have a 5-year-old who’s super into American Ninja Warrior, which is this super obstacle TV show. I feel like you don’t take pride in your work until you’re done with the course.

I’ll ask something you can take pride in, then: Your collaborators on Batman are amazing — you’ve got Tony Daniel drawing the “City of Bane” arc, and then there’s Mikel Janin, Jorge Fornes and Clay Mann working on the remainder of your run. Even before that, you had artists like Mitch Gerads, you’ve had Lee Weeks producing career-best work. What’s it like for you, seeing the work they’ve been putting in?

It’s different for everyone. I mean, people like Clay and Mitch, the pages are amazing, but they’ve become my best friends. I talk to them every day. That’s the most rewarding thing about this: Getting friends and family out of it. With Lee, Lee and I work from completely different ends of the political spectrum, but we have so much in common in terms of how we feel about faith and the world, and we bond about that. It’s all about building the personal relationships, you know? These guys become like family.

With Tony — Tony’s like nobody’s else in comics. He has so much ambition, but he meets that ambition. I feel incredibly blessed, you know? Hopefully that comes out in the art.

Yeah, of course. I think you have to. You have to consider their situation. I don’t mean their situation in terms of how they draw, although that’s part of it; I mean their situation in terms of their career and what they want out of this issue. Tony draws physically, so Tony’s going to sell those pages. If I don’t give Tony a beautiful splash page, if I just give him people talking, then I feel like I’m taking money out of Tony’s pocket, you know? It doesn’t do any good to fuck over my artist. And Mitch, Mitch likes drawing everyday stuff, and he draws digitally. So I give him everyday stuff! Or, Clay’s a mega fan of Magnum, P.I. Like, a mega fan. So we’re going to do something in Hawaii so he can watch Magnum, P.I. while he draws all day. You adjust the arc, to make it help your partner. That’s how you make good comics.

My son is 10. My older son. He came home one day and said, “Dad! I was in the cafeteria and there were some fifth-graders there, and they had the first three volumes of Batman and they were talking about how they thought it was cool!” I went up to them and said, ‘That’s my dad!'” That’s what I got. That’s worth it. That’s worth these four years. That’s the best! I remember being a fifth grader in the cafeteria.

So, what’s coming up? We know that “City of Bane” starts in Batman No. 75, and that’s eight issues. Obviously, there’s an aftermath … You’ve talked about your time on the series lasting until just after the 100th issue, after all.

“City of Bane” is eight issues, and then it extends another five after that, in a kind of aftermath story. And then we start the coda, which will be the last, say, 15 issues or so. If you’ve been reading Batman all this time, God bless you, but I’ve been torturing you for the last six months to a year. I’ve been tearing Batman down all that time. “City of Bane” is Batman getting off the ground, saying, “I’m still here,” it’s the turning point. We’ve reached the low point, now it’s time for Batman to come back and show you why he’s Batman. Maybe that won’t be in the traditional way, but it’ll show you why Batman matters. 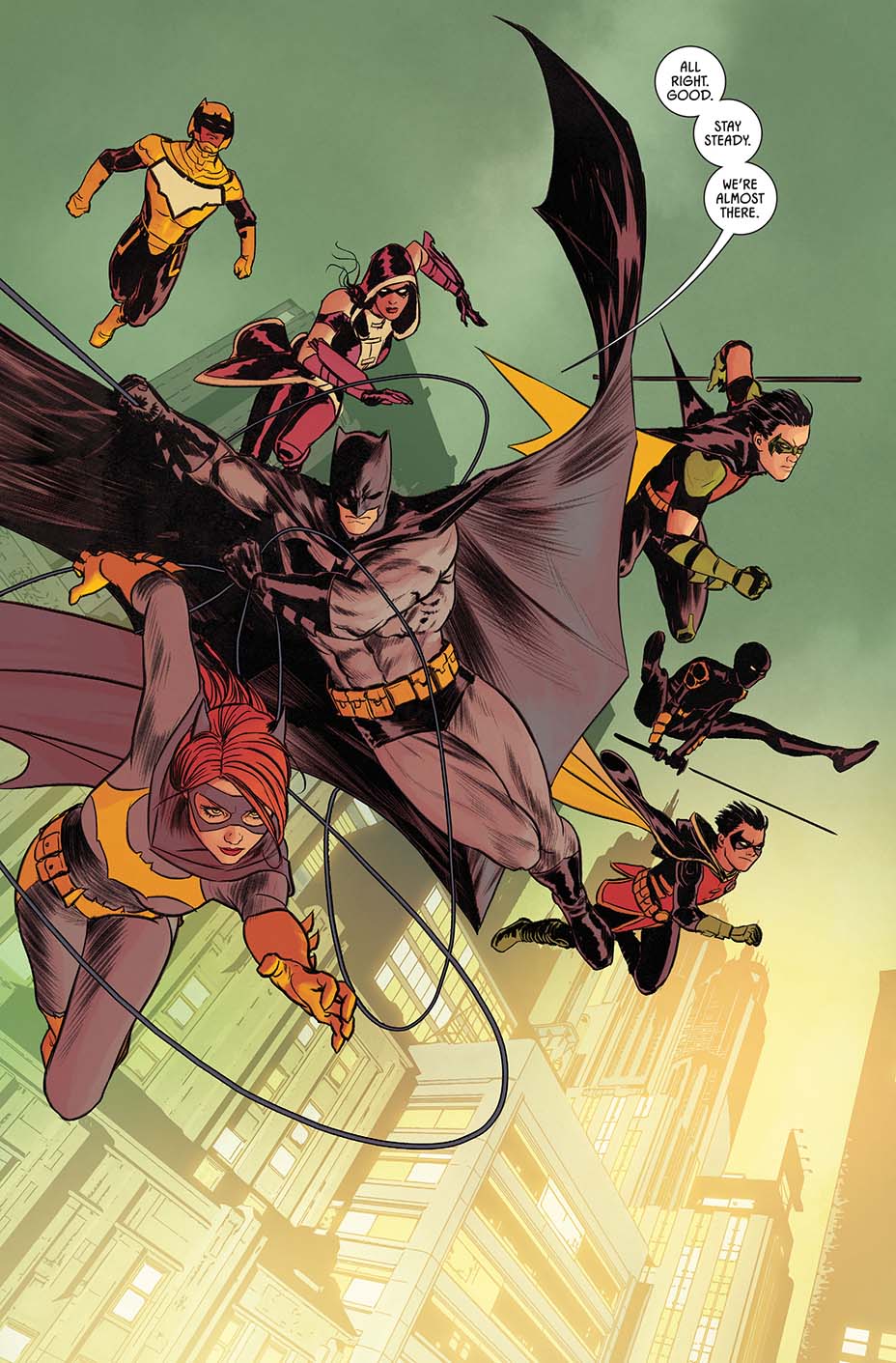 Batman No. 71, by King, Mikel Janin and Jorge Fornes, will be available digitally and in comic book stores Wednesday.

'The Batman' Will Feature a "Rogues Gallery" of Villains