Continue to The Hollywood Reporter SKIP AD
You will be redirected back to your article in seconds
Skip to main content
October 12, 2019 6:15am

The story of Ang Lee’s Gemini Man follows Henry Brogan (Will Smith), an assassin on the verge of retirement, wanting to step away before his violent life catches up with him. To his surprise, he finds himself pursued by a younger assassin who mysteriously seems to know exactly what Brogan is about to do. When he discovers the truth — that it’s a clone of his younger self — he sets out to find who’s behind the betrayal.

Like 2016’s Billy Lynn’s Long Halftime Walk, the marketing of Gemini Man has been dominated by discussions of the technical aspects of how the movie was shot in 3D 4K with a frame rate of 120 frames per second. And also, this time, talk centered on how a wholly computer-generated twentysomething Will Smith was created.

To support the technical specifics, Skydance and Paramount’s Gemini Man is being released in a variety of formats in theaters, allowing audiences to choose the experience they prefer. Unfortunately, early reviews have been tepid, with a 29 percent “rotten” score on Rotten Tomatoes. The mid-$20 million opening weekend range predicted by tracking reports is weak, but in line with other non-franchise releases in recent years starring Smith. Here’s how the film has been promoted so far:

The movie’s core premise is explained clearly on the first poster (by marketing agency BLT Communications) from late April, showing both the older Henry and his younger self staring each other down, a split that’s further symbolized by the cityscape in the background with a river running down the middle. “Who will save you from yourself?” the poster asks, making it even more clear that the two are in a conflict with life-or-death stakes.

July brought the release of the second poster, which uses the same basic idea but pulls the camera out a bit to show more of both versions of Henry.

The IMAX poster presents the dueling Henrys a bit differently, showing the two melded into a single image, the back of the older version flowing into the face of the younger. Not just two but four versions of Henry — two old and two young — are shown on the Dolby Cinemas poster, which features a shot of the motorcycle chase seen in the trailers.

The first trailer (15 million views on YouTube), released in late April, starts out by showing how Henry is on the trail of someone he’s been ordered to kill but who remains an elusive target because he anticipates Henry’s every move. That’s because, we see, the man he’s supposed to kill is an older version of himself. Young Henry was engineered in the past using Old Henry as a model because of his unique gifts and abilities, a situation both versions are eager to understand and get to the bottom of.

The second trailer (3 million views on YouTube) came out in late July and opens with Henry discovering he’s being hunted by younger version of himself. Seeing an opportunity, Old Henry tries to convince his younger self that there’s a way out, that they can do things differently and avoid so much pain. There’s lots of moral ambiguity tossed out, but it ends with Old Henry warning it could be even worse if people knew what they really were, creating a mystery it has hoped audiences will want to see answered.

Paramount hosted an event for members of the press in mid-July where it showed off footage and where both Smith and Lee talked about the story and especially the effects work that went into de-aging the actor. A behind-the-scenes featurette on similar topics was released following that event.

Another featurette released in September continued focusing on the technology used during filming and how it contributed to realizing the potential of the story.

The first clip released in late September showed more of the bicycle chase scene already glimpsed in the trailers. Fandango MovieClips was given a clip a short while later featuring another confrontation between the young and old versions of Henry.

Paramount released footage of the Budapest screening attended by Smith and others from the cast along with Lee.

AMC Theaters was given an exclusive short featurette that had members of the crew talking about 3D+ and how the enhanced frame rate means the audience sees even more detail onscreen. Similar ground was covered in an exclusive RealD3D featurette.

Smith and Lee appeared onstage at the recent Techcrunch Disrupt to talk about the de-aging technology used in the movie to the tech-savvy and influential crowd there. They also were part of a press conference held at YouTube Space LA, a venue that reinforces the tech-centric nature of the movie’s campaign. A similar Q&A with Smith and Lee was held earlier for Microsoft employees.

At the red carpet premiere hosted at the TCL Chinese Theater earlier this week, Smith and the rest of the cast praised Lee’s filmmaking and once more called out the high frame rate and other visual accomplishments as a major reason audiences should see the movie in theaters. 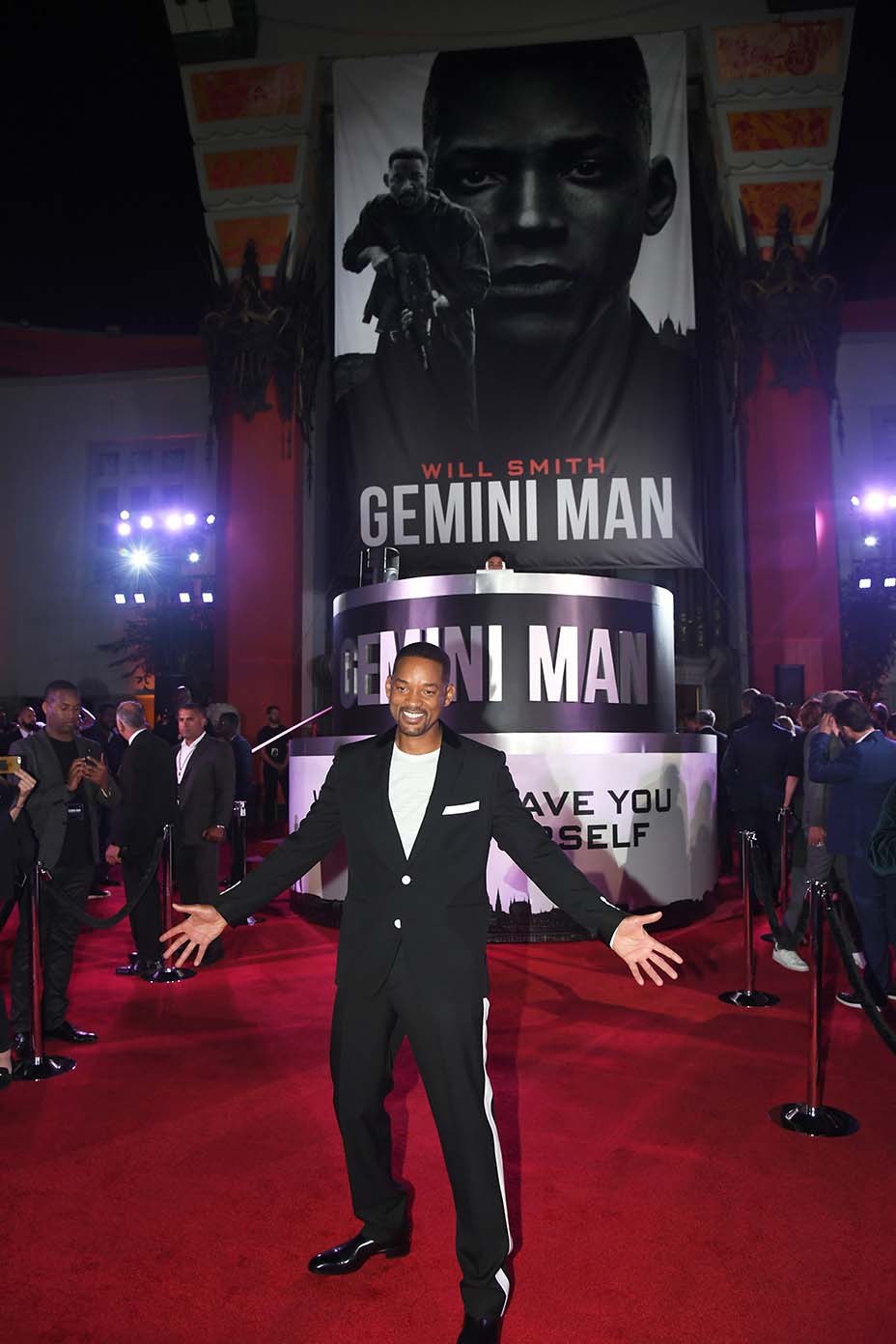 As stated, the campaign makes it a point to focus on the technical wizardry involved in Lee’s filmmaking, either the high frame rate or the accomplishment in creating a version of Smith that’s nearly 30 years younger than he is in real life.

What’s clear is how that message has been brought to the forefront in lieu of most anything related to the actual story. The plot of the film is only slightly discernible from the trailers, and while the posters offer a premise they don’t do much to expand on that or explain to the audience what they can expect.

That message may not be resonating yet, a conclusion based both on the low estimates for opening weekend — something all the more jarring given the Smith-starring Aladdin is one of the year’s biggest films — and the anemic trailer view numbers on YouTube, which combined add up to less than 20 million. Joker’s record-breaking opening weekend shows that it’s not that people aren’t turning out, so if Gemini Man does end up underperforming, it may be another example of original sci-fi simply not being able to measure up with so many franchises offering more attractive alternatives.