Most time-loop films traffic in existential comedy. Think Palm Springs and Groundhog Day. But while the new short film, Two Distant Strangers, also features a time loop, the overall, suffocating feeling during its 30 minutes is one of existential terror.

The story of a Black man trying to get home to his dog after spending the night with a woman he has met, the film is a powerful dramatic take on police violence in America, situating its main character in an endlessly repeating day where he is shot, time after time, by a white cop, no matter what he does.

“What motivated me was to try and capture the feeling around the anxiety that you carry when you are a Black man or a Black woman just moving through the world,” says Two Distant Strangers’ writer and co-director Travon Free. “It’s a claustrophobia that we have around our existence as Black people in America.”

Continues Free, “I remember I was watching the news and I was looking at the protesters on TV and just the nature of Breonna Taylor and Ahmaud Arbery and George Floyd all being stories that kind of collapsed on each other at the same time to create this global protest movement. And I thought about what it feels like to see a new story like that pretty much every other day about another Black person being shot by the police. You have this feeling that there’s a ticking clock, that one day, I’m just waiting for my turn to be this particular news story. It doesn’t matter where you are. You’re not safe anywhere. That feeling is what I wanted the movie to capture. He goes out, he gets shot. He stays home, he gets shot.” 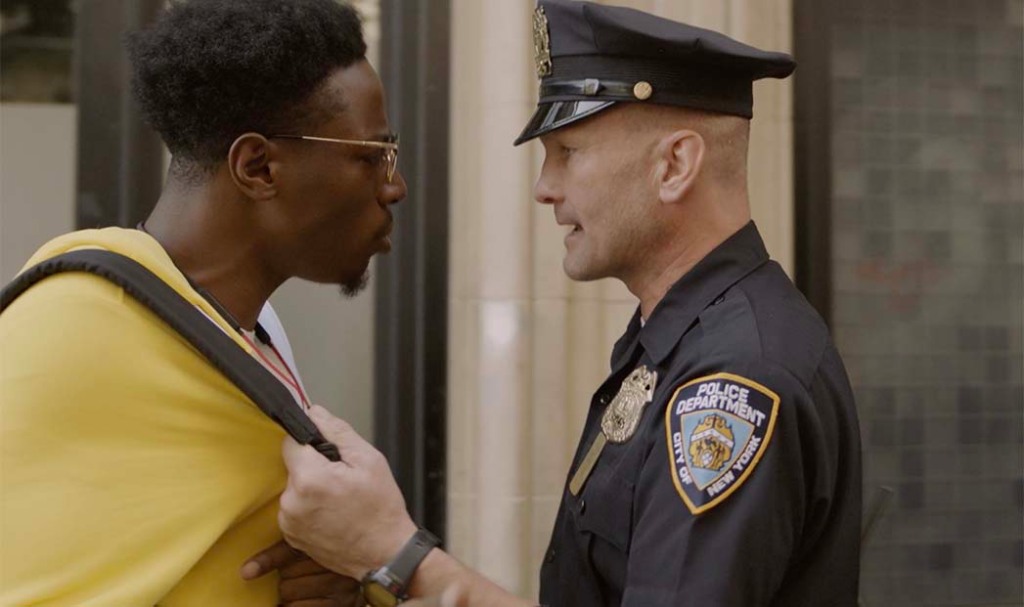 The film stars actor-rapper Joey Bada$$ (known for roles on Bad Robot and Boomerang) — who plays the main character, an illustrator named Carter who is caught in the endlessly deadly time loop — along with Andrew Howard (Watchmen, Perry Mason) as the police officer, and Zaria as Perri, Carter’s love interest. The project has also lined up a host of high-profile executive producers and backers including director Adam McKay, Sean “Diddy” Combs, Marti Noxon, Damon Lindelof, Gigi Pritzker, Mickey Meyer, and NBA players Kevin Durant and Mike Conley Jr. (who posted on Twitter that “This film has the opportunity to start meaningful conversations and continue involvement in these issues.”)

Free — an Emmy-winning television writer/producer who’s worked on Showtime’s Black Monday, HBO’s Camping and TBS’ Full Frontal with Samantha Bee — wrote the short in five days in July 2020, after he and Oscar-nominated producer Lawrence Bender (Inglourious Basterds, Pulp Fiction, Good Will Hunting) participated in a number of Black Lives Matter protests after the police killings of George Floyd and Breonna Taylor. At the time, Free and Zaria, his girlfriend, were living at Bender’s house in Los Angeles and had been since earlier in 2020. “Travon and I were in quarantine together this entire time,” recalls Bender, who also produced the 2006 climate-change documentary An Inconvenient Truth. “I have a 14-year-old boy and we all spent many days around the dinner table talking about social justice and racism. Finally, I went what else can I do besides protest? As a filmmaker I feel like the area that I can make a difference is storytelling.”

Bender and Free felt so passionately about the project and its message that they began filming in late August even before all the funding had been raised. “We all had a feeling of urgency to make it and get it out,” says Bender. “We really felt let’s not wait until we raise all the money. Let’s not wait until COVID is over. We were raising money as we were shooting. It was really the cliché of friends and family — all we did was get checks from our friends to support us.”

The film — co-directed by Martin Desmond Roe (writer of the Oscar-nominated short Buzkashi Boys) — shot over the course of four weeks. But, because of the COVID pandemic, the production team was not able to secure insurance for the movie that would cover anyone getting sick. So, says Free, “We spent a lot of money on safety. We hired a company to test everybody every day and make sure nobody got sick. Over the course of three months, not a single person got sick. It was also really nerve-wracking making sure everybody was adhering to the proper protocols. We were pretty much rolling the dice on all the money we raised to be able to shoot this. The company we hired was really good about making sure everyone complied the entire time.” 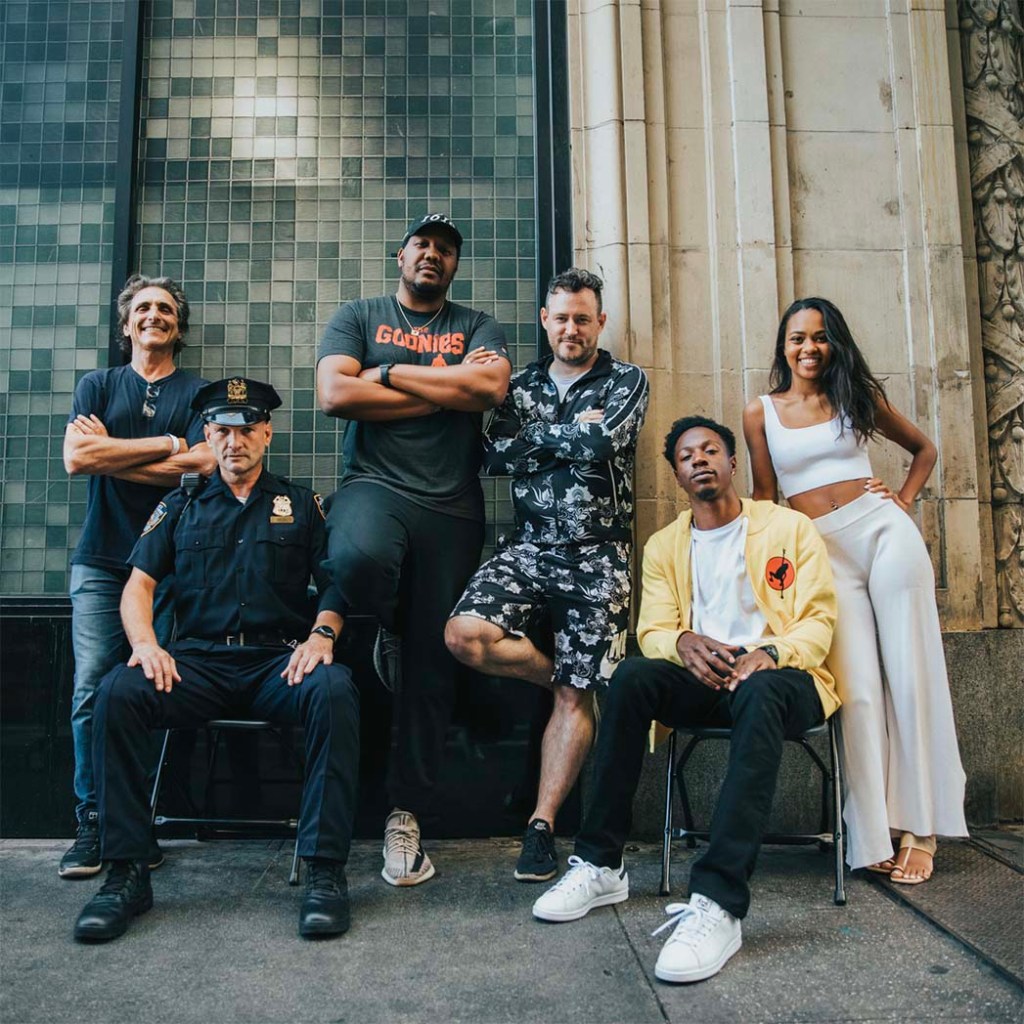 Two Distant Strangers, which features a score by James Poyser of The Roots, locked on Oct. 27 and is now looking for distribution, as it holds a number of virtual screenings, many of them hosted by its roster of prominent funders. “We started getting great reactions from people. We have not had a difficult time getting people to get on board or buy into our vision,” says Free.

The team behind Two Distant Strangers lined up its backers via various angles of outreach. Free knew Adam McKay (whose wife, director Shira Piven, also contributed to the project) through his work writing on McKay’s project, Showtime, an upcoming HBO series about the Lakers in the 80s. Early on, producer Samir Hernandez, who had worked on the Jordan brand at Nike and had contacts in the NBA, brought the script to Durant (and Rich Kleiman who runs his production company Thirty Five Ventures) and Conley Jr. “They immediately bought into the project,” says Free. And, adds Free, the film’s executive producer Van Lathan sent the script to Diddy “and got him to finally watch it and [Two Distant Strangers producer and Grey’s Anatomy star] Jesse Williams is also close with Sean. They both chased him down. Sean called Lawrence at like four in the morning and told him how he had to be a part of it.” Adds Bender, who has known Combs for years, “It’s a very important subject to him. He is really passionate about this and about the movie and how he can help.” 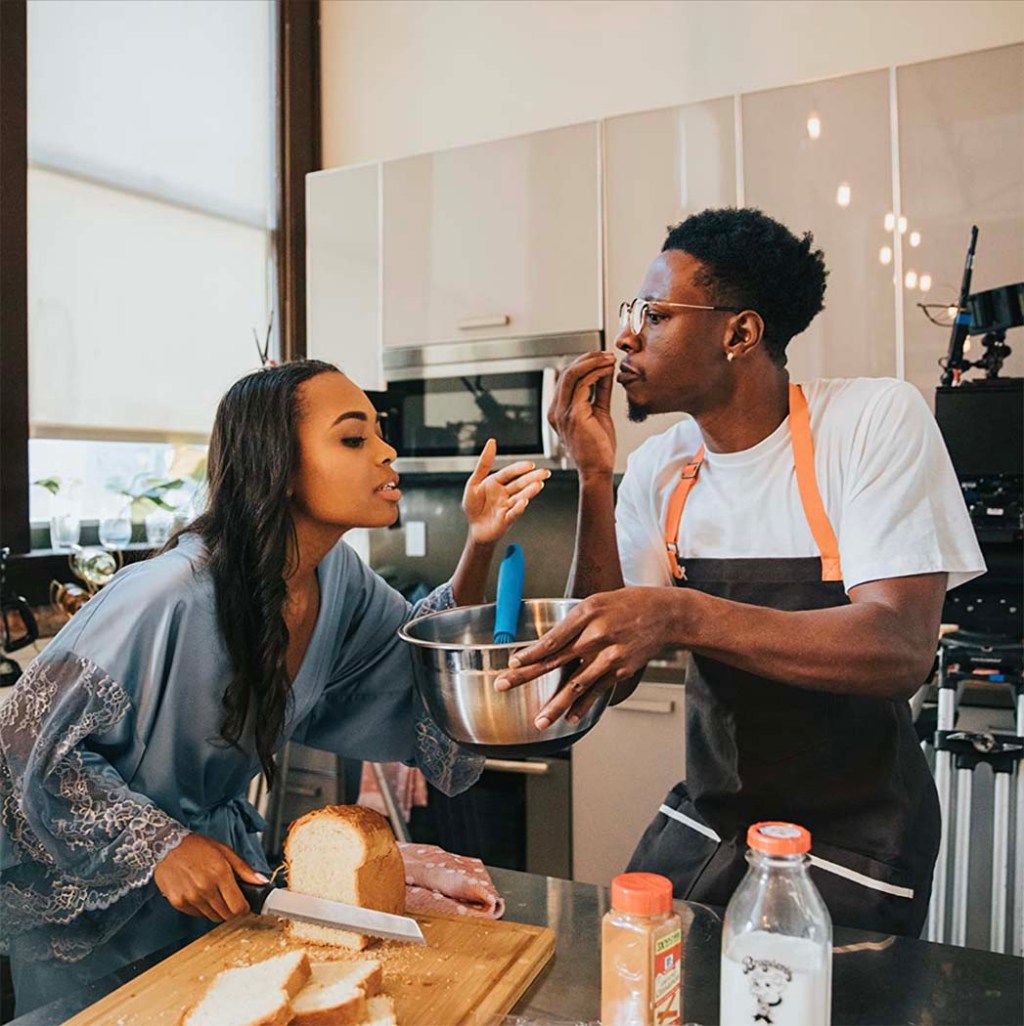 Amid the search for funds and the quick turnaround in completing the movie, one thing that made the production easier for Free and Bender was being under one roof. “You have no idea how great it was for us to be quarantined together,” says Bender, who also executive produced the new Netflix animated short Cops and Robbers, a spoken-word response to police brutality and racial injustice, for directors Arnon Manor and Timothy Ware-Hill. “You’d walk down the hall, what about this. He’d walk down the hall, what about that. When we started prepping, we’d do it in the backyard with social distancing. [My house] became a bit of a hub where we would either rehearse or discuss or have meetings outside in the daytime.”

Ultimately though, says Free, “I don’t think we’re close to solving the problem of police violence against Black people. It’s a story that’s never not going to be relevant in this day and age.”