Continue to The Hollywood Reporter SKIP AD
You will be redirected back to your article in seconds
Skip to main content
April 13, 2021 3:26pm

The flight of Tom Cruise’s Top Gun: Maverick from the July 4 corridor to Thanksgiving isn’t causing the panic that such a move would have prompted a few months ago.

While theater owners weren’t ecstatic to learn of Top Gun’s move, they’re confident there will be some semblance of a summer season based on a flurry of positive data regarding the recovery of the U.S. box office.

“You learn to roll with it. Other movies have moved into that space,” says Patrick Corcoran, vp and chief communications officer at the National Association of Theatre Owners. Within hours of Paramount’s Top Gun shift to Nov. 19, Universal snapped up the July 2 date for The Forever Purge.

The decision to delay Top Gun, directed by Joseph Kosinski, isn’t a signal other tentpoles will move. Sources close to the film tell The Hollywood Reporter that Cruise wants to embark on a world tour in advance of the opening, something that would now be impossible in much of Europe, where there are once again lockdowns, and possibly Japan.

Also, the movie no longer finds itself sandwiched between the next Fast & Furious installment F9 (June 25) and Black Widow, which recently delayed its release from early May to July 9.

“Tom Cruise is one of the few stars who can move the needle by doing late night shows and premieres across the world,” says a veteran studio executive.

Elsewhere, the Memorial Day schedule remains intact for now, with both Paramount’s A Quiet Place Part II and Disney’s live-action Cruella set to debut May 28. And there are zero plans presently to move June event pics In the Heights and F9. Along with Black Widow, July brings G.I. Joe origin pic Snake Eyes, which Paramount and Skydance have moved up to July 23.

Analyst Eric Wold of B. Riley Securities says the Top Gun 2 switch shouldn’t cause alarm: “We believe these moves to slots later in 2021 or in early 2022 merely represent a mindset amongst studios to have these films available to moviegoers when capacity restrictions are loosened.”

Another good sign: Every Thursday, executives at studios pore over weekly polls conducted by the National Research Group. For the first time, those who would feel comfortable going to the movies has crossed 60 percent. A month ago, it was 52 percent. Says NRG executive Ethan Titleman, “People are less worried about catching the virus and ready to be themselves again and go out.”

Adds Paul Dergarabedian of Comscore in reference to the Top Gun move, “Theater owners have grown accustomed to an ever-changing release calendar. What pains them the most is when a major title decides to go day-and-date in cinemas and the home.” That club includes Black Widow and In the Heights. 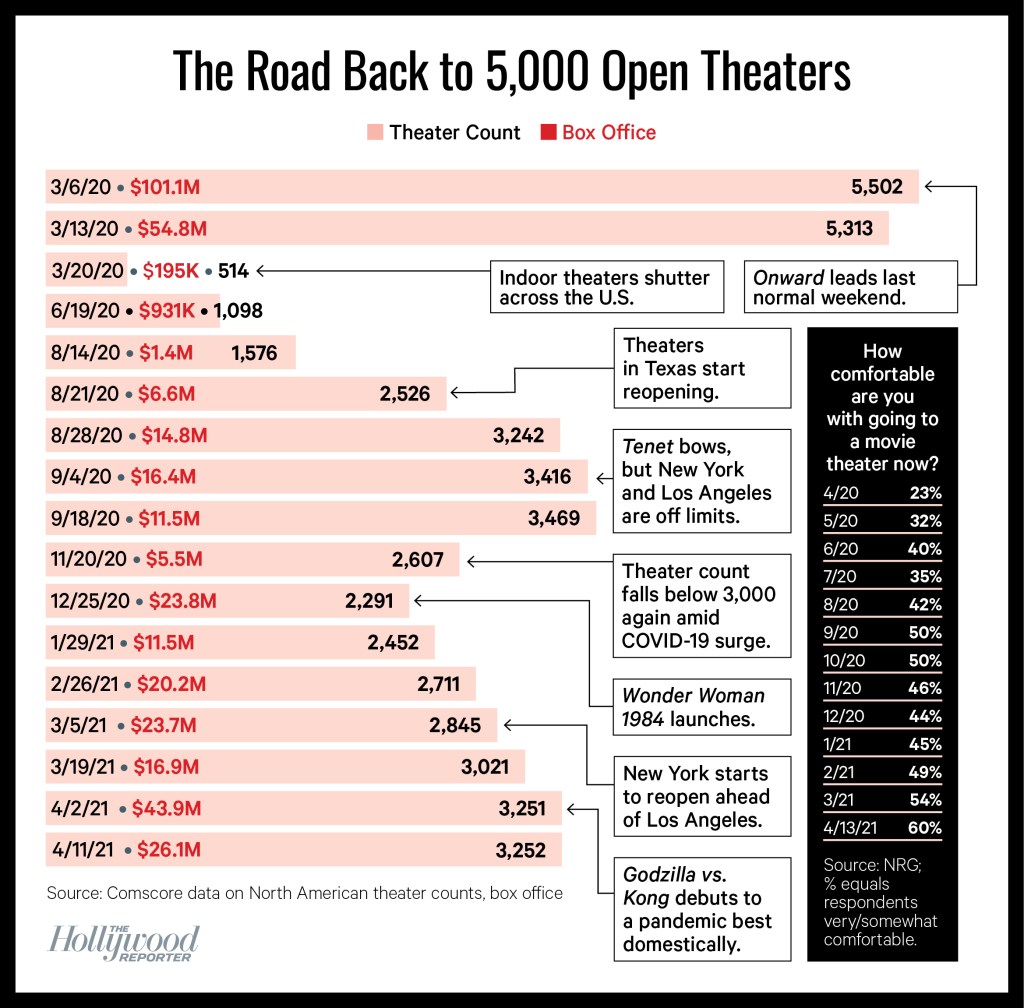