[This story contains spoilers for Mandy]

Panos Cosmatos’ new film, Mandy, comprises a handful of sections and two main chapters. In the first, idyll is met by chaos, and the life Red Miller (Nicolas Cage) shares with his girlfriend, Mandy Bloom (Andrea Riseborough), is shattered by a hippie cult dabbling in demonology, led by deadbeat folk singer Jeremiah Sand (Linus Roache), who falls for Mandy in but a single glance. In the second, chaos is supplemented by still more chaos, as Red forges a battleaxe and sets forth on the road to vengeance, hellbent on introducing Sand, his followers and the leather-clad fiends to whom they give homage to the business end of his blade.

Hallucinatory surrealism and naked, blood-splattered insanity make up Mandy‘s structure, its floors, walls and ceiling. But the joint clamping these parts together, the element that binds the whole film together, is nestled in between them, about halfway through the film (plus about eight minutes). That’d be Bill Duke, playing Caruthers, Red’s friend, a man living off the grid and away from prying eyes in a modest RV encampment-cum-arms depot. His home is a palliative oasis for Red in the wake of Mandy’s demise, ritually sacrificed as punishment for rejecting Sand and embarrassing him in front of the rest of the gang: It’s not the paradise Red knew with her, but it’s a damn sight calmer than the hell he’s put through prior. 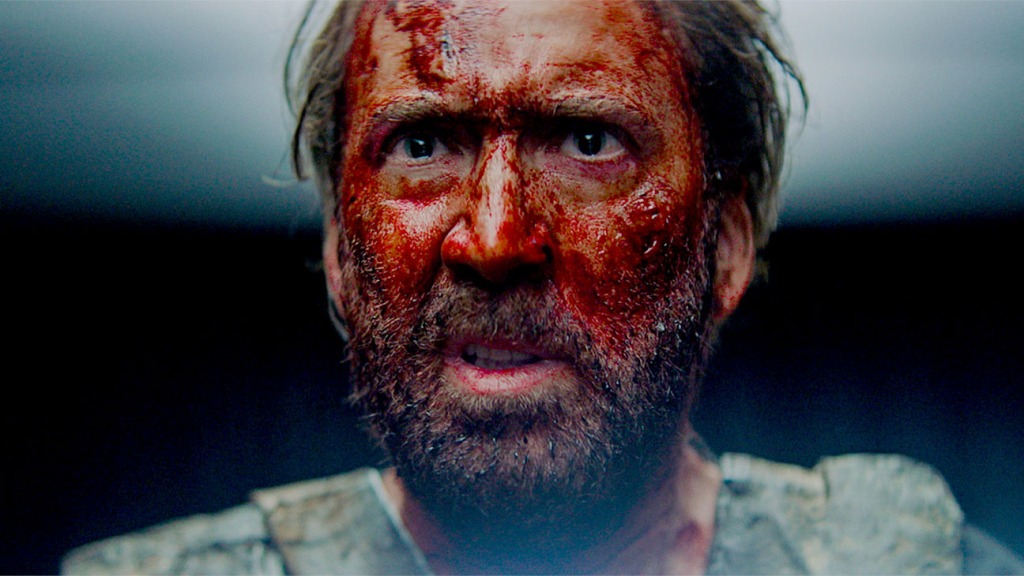 It’s also the place where Red arms up to take on demons and hippies alike, which, if you’re a fan of Duke’s work, reads as considerably more in line with what we’re conditioned to expect from the characters he tends to play. Duke’s best-known role, or at least his best-loved, is Predator‘s Mac Elliot, the surface-cool sergeant who goes full nuclear when his friend gets blown apart by alien ordnance; he flips out, hefts his fallen comrade’s M134 minigun and indulges in some deforestation via a hail of bullets, screaming all the while. This isn’t the guy you turn to for level-headed counsel. This is the guy you turn to for thunder and havoc.

And yet Duke’s presence suits Mandy perfectly for the brief time we get to bask in the warm glow of his RV. He could go as nuts as Cage and he’d still seem like the better collected man; after all, maybe it takes one to know one. Caruthers’ scene with Red is the ceasefire separating the film’s halves, a moment of extended quiet contrasting with the noise of its beginning and ending. It’s one of the only moments in Mandy where nothing overtly weird happens: No monsters, no trippy, outre cinematography, no cryptic dialogue. It’s as straight-laced as Cosmatos can muster, and like the rest of the movie it’s lovely, but in the manner of no-nonsense conversation between wounded men.

Granted, overt weirdness is what you’re paying price of admission for here. You’re not going to buy a ticket to Mandy for a slickly written exchange between Duke and Cage, though it might be one of your favorite scenes in the whole movie. You’re going to buy a ticket to Mandy to see the cover of every single ’80s heavy metal album you ever listened come alive on screen in the shape of the darkest D&D campaign you never got to play. You’re going to buy a ticket for gonzo mayhem and one of the all-timers in Cage’s filmography. But the Caruthers interregnum lends the film a welcome, and necessary, layer of reality to augment its unreality.

Realism, of course, is relative. In a realist version of Mandy (what would that even look like?), Caruthers would react to Red’s tale of woe with a healthy dose of disbelief. Instead, he listens to his friend with the mute awareness of a sage. There’s a humming tension perceptible through the folds of his coat, the promise of elucidation to come. Caruthers knows who, and what, Red is after, and he’s happy to expound as plot demands. “So whatcha hunting?” he asks. “Jesus freaks,” Red replies. “I didn’t know they was in season,” says Caruthers. The writing pops. It’s snappy. It’s also withholding, until Red tearfully, furiously recounts the details of Mandy’s murder.

Being a movie’s designated Exposition Character is, about nine times out of ten, a thankless job. Mandy thanks Duke profusely, because he takes that job, that one scene, and channels the function of exposition into language thick with gravitas. “No one knows where they come from,” Caruthers tells Red, framed by golden light pouring in from the windows as he sinks in his recliner. “First it was stories from the interstate, leaving truckers for dead, prostitutes vanishing, and gutted bodies on doorsteps, and always the same: Biker gang, black bikes, only seen at night.” Duke draws out each line, every word, as though the syllables are the last bits of meat he’s sucking from the bone. He’s enjoying himself, a wary tremble in his voice as he warns Red that he’s got low odds of avenging Mandy and living.

And Duke’s enjoyment, for as long as his fleeting screen time lasts, becomes our own. Watching him slip so comfortably into Caruthers’ skin is one of Mandy‘s best merits, and perhaps its most unspoken. Unsurprisingly, the highest praise heaped on the film is a credit to Cage’s performance, and for good reason. He’s phenomenal. So’s Cosmatos, seamlessly weaving together horror and psychedelia in a harrowing, heartbreaking package unlike any movie yet seen in theaters in 2018. But Mandy hangs a heavy burden on Duke, and he shoulders it effortlessly. He’s the maypole around which Cosmatos and his co-screenwriter, Aaron Stewart-Ahn, braid Mandy‘s aesthetic, its plot, and its endless phantasmagorical pleasures.

Nicolas Cage's 'Mandy' and the Weight of Expectations