This fall, actor Billy Magnussen will see two of his anticipated films open after COVID-19 delays, with The Sopranos prequel The Many Saints of Newark hitting Sept. 24 and James Bond movie No Time to Die out Oct. 21. No matter how rewarding those projects were, his HBO Max series Made for Love was perhaps even more personal for the actor, who spent nearly a year to complete the season when factoring in COVID filming delays.

In Made for Love, Billy Magnussen plays Byron, a tech billionaire who invents a chip he says will make couples closer than ever, but which he uses to spy on his wife, Hazel (Cristin Milioti) after she escapes his fantastical compound, known as The Hub. For Magnussen, Byron turned out to be more nuanced the more he dug into him.

“The shell of it, he is the personification of toxic masculinity. He’s grown up in a world where, ‘What is it to be a man?’ you have to be strong. Controlling, dominate. You have to have the luxuries. You have to be all that stuff,” says Magnussen. “While playing him and finding him, you realize that behind that little curtain, he’s a scared boy. That’s the best part about playing this character.”

The little boy elements came out subtly, such as a moment in which Byron was confused belligerent when a journalist compared him to Willy Wonka, a character he’s never heard of.

“Byron, who was traumatized at a young age, decided to close off from the world and create his own world, The Hub,” says Magnussen. “He’s just creating his own reality, constantly. When things don’t work as he wants, he has a fit. That [Willy Wonka joke] was discovering the great writing of [showrunner] Christina Lee and [author an executive producer] Alissa Nutting.” 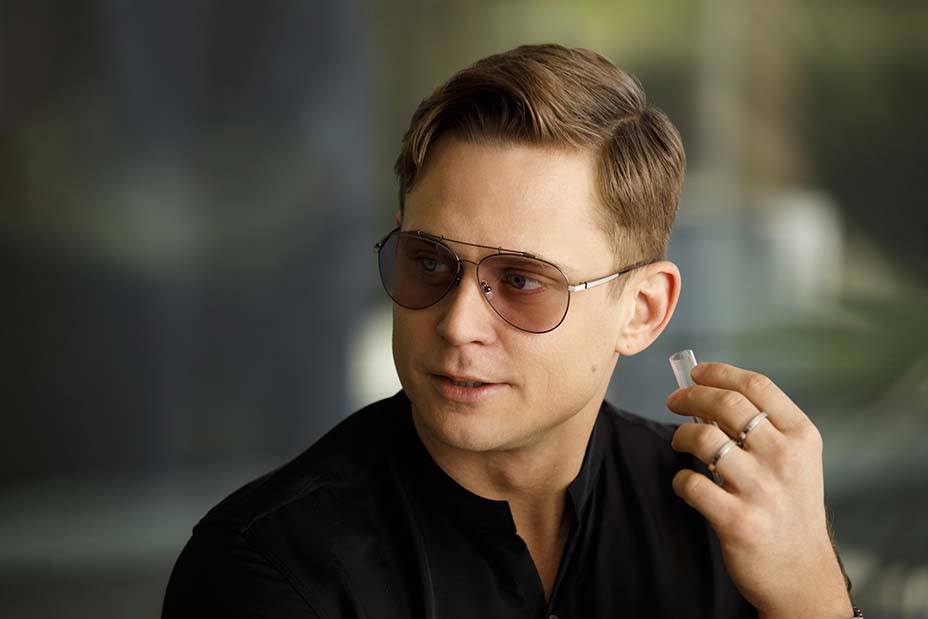 In December 2019, news broke that a Disney+ Aladdin spinoff was in the works centering on Prince Anders, the character Magnussen played in the $1 billion grossing live-action remake.

Magnussen had learned that in Hollywood, rarely do opportunities fall into one’s lap. That’s why he approached Aladdin producers Rideback with the idea to develop a spinoff and pitched it hard. Together, they approached Disney, which has never made a spinoff from one of its live-action remakes.

“They had no thought of doing it. I just didn’t want this character to die, because I fell in love with it so much and I saw how much it put a smile on people’s faces,” says Magnussen.

It’s been a slow process, but Magnussen has been spending part of lockdown continuing to develop the script with screenwriters Jordan Dunn, Shane Andries and Chris Smith.

“It’s an uphill battle, that’s for sure, but it all stems from love and respect and it’s a passion project. You see it happen all the time,” says the actor, citing Ryan Reynolds’ years-long push to get Deadpool made. “No one else was going to pitch this movie except me.”

Magnussen had two high-profile films in the can before COVID hit. In No Time to Die he plays a member of the CIA, a role that reunites him with filmmaker Cary Joji Fukunaga, whom the actor worked with on Netflix’s Maniac.

“Cary is a workhorse,” says Magnussen. “He is a guy that won’t finish until it’s done and the best idea wins.”

For The Many Saints of Newark, Magnussen not only dove into the role of Paulie Gualtieri, the silver wing-tip-haired gangster played by Tony Sirico in the original series, he also dove into The Sopranos for the first time as a viewer.

“I could not afford HBO when The Sopranos was there. I did not watch it,” says the actor. “[Creator] David Chase is a legend, of course, and there’s the whole legacy of it. I revisited everything once I got the job. It’s a very interesting challenge to piggyback off of another actor’s performance. And we figured that out.”

While Made for Love has not officially been renewed by HBO Max, showrunner Lee has ideas brewing.

“I’m so proud of this,” Magnussen says of the show. “This has a bigger presence in my heart than a lot of the projects I’ve done before.”

'TV's Top 5': How 'Made for Love' Finds Comedy in the Horrors of Technology

April 23, 8:05 a.m. Updated to note that writers Shane Andries and Chris Smith are working on the Prince Anders spinoff.