With the news that 2020’s Birds of Prey movie has cast its Birds to star alongside Margot Robbie’s Harley Quinn, audiences unfamiliar with the intricacies of DC comic book continuity might be wondering just who Black Canary and the Huntress actually are, and what they have to do with the Birds of Prey and Harley Quinn. Glad you asked. Here’s the backstories to the characters to be played by Mary Elizabeth Winstead and Jurnee Smollett-Bell.

The Birds of Prey are a relatively recent addition to DC canon — at least in the sense of the fact that many of the characters date back more than half a century. The Birds were originally a two-piece that first showed up in 1995’s Black Canary/Oracle: Birds of Prey No. 1. A number of additional heroes have drifted in and out of the group since then — predominantly female, although there have been male Birds — with the center of the team being, traditionally, Black Canary and Barbara Gordon, the latter either in her Batgirl or Oracle personas.

There is, curiously enough, no direct connection between the comic book incarnation of the Birds of Prey and Harley Quinn, although both belong to the Batman mythos indirectly, and have been considered female-centric properties by DC fans. Quite how the two will relate onscreen remains unclear.

One of DC’s longest-serving female heroes, Black Canary debuted in 1947’s Flash Comics No. 86. Originally the girlfriend of a police detective who becomes a vigilante (disguising herself with a blond wig) to help out her beau, she would become more and more independent and powerful in subsequent appearances; when her love interest was killed in a 1969 storyline, the Canary crossed between parallel Earths for a new start by joining the Justice League of America, gaining superpowers — a sonic scream she calls the “canary cry” — in the process. In a classic superhero comics continuity moment, it’s later retconned that she is actually possessing the body of her own superpowered daughter, a change that happened without her recollection when she passed between Earths.

As with most DC superhero characters, Black Canary’s backstory has been significantly revised and simplified in the multiple reboots of the publisher’s superhero universe. After 1985’s Crisis on Infinite Earths, the planet-switching and possession were eliminated, and it was simply declared that there had been two Black Canaries, with the daughter inheriting the identity from her mother at some point.

Following 2011’s Flashpoint, that was simplified even further, with the suggestion that the current Black Canary was the sole character to have used the identity, created after a period of being a secret special ops agent. She would go on to become an accidental rock star, a career choice that provided the spine of the critically acclaimed 2015 Black Canary comic book series, the last time she headlined her own title.

No matter the backstory, Black Canary has been part of the Birds of Prey since the group’s creation and has played a central role in every incarnation of the team. Initially the field agent of Oracle — Barbara Gordon’s alter ego after she lost the use of her legs as the result of an attack by the Joker — she quickly became the heart of the group, providing common sense, good humor and conflict resolution between the more passionate members of the team. And speaking of which … 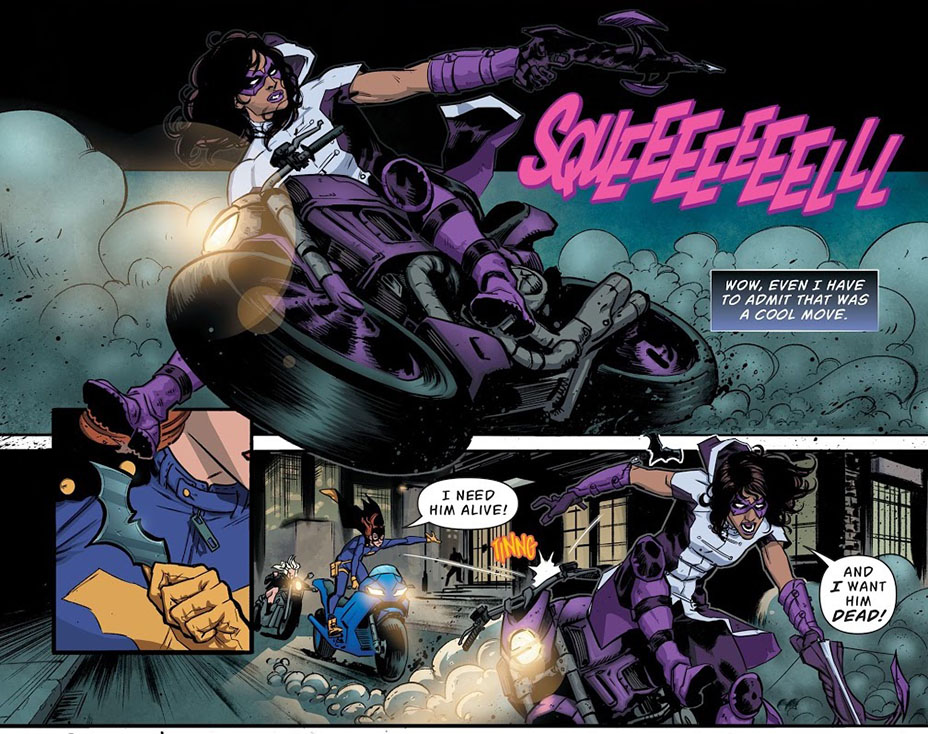 If Black Canary’s backstory is complicated, then the Huntress’ is almost impenetrable. When the character first appeared in 1977’s DC Super Stars No. 17, she was the adult daughter of Batman and Catwoman on Earth-2, the parallel world where superheroes had been in action since the Second World War. When Earth-2 was removed from reality as part of Crisis on Infinite Earths in 1985, that version disappeared, allowing for a new Huntress to appear in 1989’s The Huntress No. 1; this time, she was the daughter of a crime family and sole survivor of an assault by rival families that left her entire family dead.

By 2014’s Grayson No. 1, that history has been revised yet again (to be fair, 2011’s Flashpoint had rewritten DC’s larger mythology one more time by that point). Now she was the granddaughter of a famous mob boss and “heir to the entire Sicilian mob,” who had disappeared under mysterious circumstances years earlier. She had, in fact, been recruited by Spyral, a covert organization whose true purpose and allegiances were, at all points, unclear. Although the Huntress — who, at this point, was still Helena Bertanelli, having not adopted the costumed identity yet — believed she was doing good, she was merely a pawn in a multilayered chess game that would leave her ultimately disillusioned and abandoned, prompting her to become the Huntress and attempt to save the world on her own.

Both the second and current incarnations of the Huntress have been part of the Birds of Prey, and in both cases, her involvement was filled with conflict as her take-no-prisoners attitude and disregard for certain rules and morality proved to be troublesome for other members of the team. Ultimately though, no matter which version of the character, the Huntress would prove to be a valuable and even necessary part of the Birds of Prey.