It’s been four years since Margot Robbie joined the cinematic incarnation of DC’s Suicide Squad as Harley Quinn, a character beloved by fans since she was introduced in Batman: The Animated Series back in 1992. Robbie’s Harley was filled with glee and a penchant for mayhem and destruction along with an enduring (if problematic) love for Mr. J.

At one point in 2017 there were multiple Harley-related films in development by Warner Bros, including the Suicide Squad sequel scheduled for 2021. Now one — Birds of Prey (And the Fantabulous Emancipation of One Harley Quinn) — hits theaters on Feb. 7.

Robbie reprises her role as Harley in the movie, set some time after the events of the first Suicide Squad, at a point when she has left Joker and is on her own. When she gets on the bad side of Gotham crime lord Roman Sionis (Ewan McGregor) she winds up teaming up with the vigilante Huntress (Mary Elizabeth Winstead), the super-powered Black Canary (Jurnee Smollett-Bell), the disgruntled cop Renee Montoya (Rosie Perez) and the young thief Cassandra Cain (Ella Jay Basco), all of whom have a grudge against Sionis.

Early tracking forecasts an opening weekend of $50 million-plus for the film, directed by Cathy Yan and written by Christina Hodson. That’s in large part because of a marketing campaign that has been a fun, colorful affair.

All the supporting characters are shown as angels or fairies flying around Harley’s head on the teaser poster (by marketing agency Concept Arts), released in September. That’s a great way to convey the story’s perspective and take advantage of her being the one holdover from a previous film. Notably, the bright colors seem to continue the brand identity established during the campaign for Suicide Squad in 2016.

A series of posters came out in October, all of which focus on Harley. She’s shown lounging on a car hood, kicking the camera with gum stuck to her shoe, hanging around with a hyena (a nod toward her history with Joker) and riding a bullet that’s just shattered a heart. They’re all meant to communicate something about the story and character in addition to just being colorful and eye-catching.

A handful of new posters were released at the same time as the movie was being promoted at Comic Con Experience in Brazil in early December. That included a group poster by marketing agency BOND showing all the Birds of Prey and Harley with all sorts of insane props and other things around them, including the stuffed beaver featured in the character’s solo comic written by Amanda Conner from a few years ago. There were also solo posters for Victor Zsasz, Roman, Black Canary, Huntress, Harley, Montoya and Cass Cain.

The theatrical one-sheet has all the main women on the team strolling purposefully down an alley, Harley at the front and chaos behind them. They’re arranged slightly differently on another poster that has them all striking action poses.

For IMAX the team is crouched in close to the camera, feathers floating down to reinforce the “Birds” part of the title. A comic book/pop-art approach is taken on the Dolby Cinemas poster, which puts all the women (and Bruce the hyena) in separate colorful panels.

The first trailer debuted exclusively in theaters before It Chapter Two, which also came from Warner Bros. That exclusivity, instead of putting it online at the same time it was shown in theaters, helped create a sense of anticipation about the spot even before it was released.

When it was finally released (21.6 million views on YouTube) online in early October, everyone got to see what the movie was all about. It starts with Harley talking about how she’s broken free of Joker’s influence and found other women in Gotham similarly seeking their independence. She assembles a team including Black Canary, Huntress, Montoya and others to fight back against Black Mask, who is targeting them for unknown reasons. For obvious reasons it’s a very Harley-centric trailer, with the other characters barely having any lines of their own, showing her to be the center of the unlikely team.

The second trailer (8.6 million views on YouTube), released in early January, sells a very different and much more confident movie. It immediately establishes how Harley broke things off with Joker but now faces threats from a lot of people since she’s on her own, especially Black Mask. She finds there are other women who have similarly gotten on the bad guy’s bad side and convinces them there’s strength in numbers. What follows is a movie that’s filled with joyful violence and, apparently, big musical numbers. That’s a very fun and entertaining message to send, positioning it as a colorful and upbeat alternative to other recent comic-based movies. 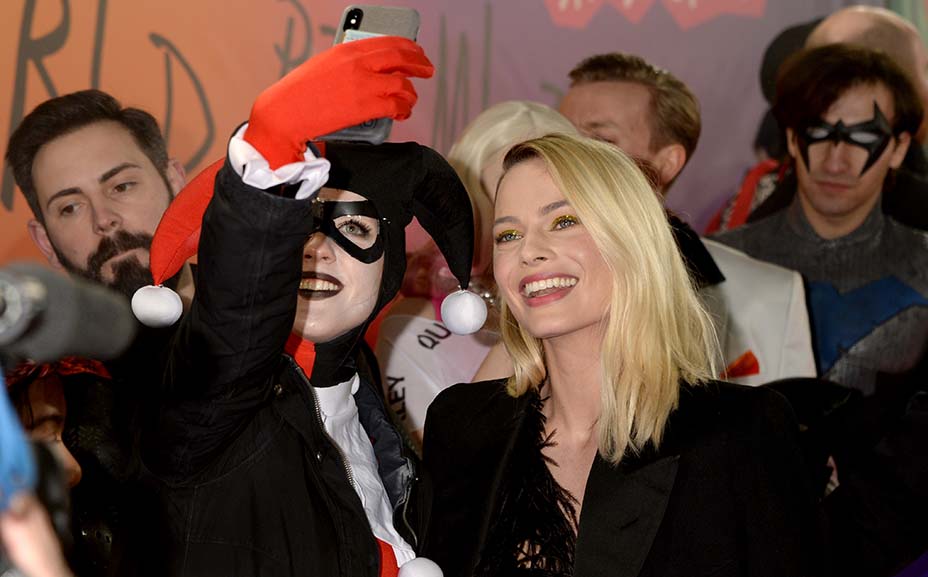 Behind-the-scenes footage and comments from the cast were shown to industry executives by WB during its CinemaCon presentation back in April. Two months later it was touted to exhibitors during CineEurope.

It was announced last September that the movie would be part of a major Harley Quinn invasion at New York Comic-Con. That included a display of costumes and props from this movie and a number of outdoor billboards featuring the character promoting the film. There were also other Harley-specific activations for the DC Universe animated series and more.

At NYCC, DC hosted an appearance by the movie’s cast, who joined cosplayers dressed as the characters from the film. The publisher also announced a new Harley Quinn and the Birds of Prey miniseries featuring the same characters featured in the movie that was planned to launch just before the film’s release. Meanwhile, a debut date for DC Universe’s animated series was finally revealed.

In December the cast and crew appeared at Comic Con Experience in Sao Paulo, where they showed attendees exclusive new footage and a new trailer.

DC Universe announced last month it would invite subscribers of the streaming service to sign up for free advance screenings in 30 cities across the country. The site also promoted the comics and shows featuring Harley, Huntress and the rest that were available to subscribers.

The movie scored an important endorsement when Gail Simone, who wrote some of the most beloved and popular Birds of Prey comics, told a story of being invited to the set and meeting the cast, saying what she saw there were the characters she loved in all their glory.

There are plenty of scenes from the movie used in the official video for “Diamonds” by Megan Thee Stallion, the first single off the soundtrack album, which also features the singer in a fun park setting appropriate to the film. A video for “Sway With Me” by Saweetie & GALXARA came out after that.

A trailer containing the full soundtrack lineup was released in mid-January, showing the album to be filled with some of the hottest female artists of the moment. 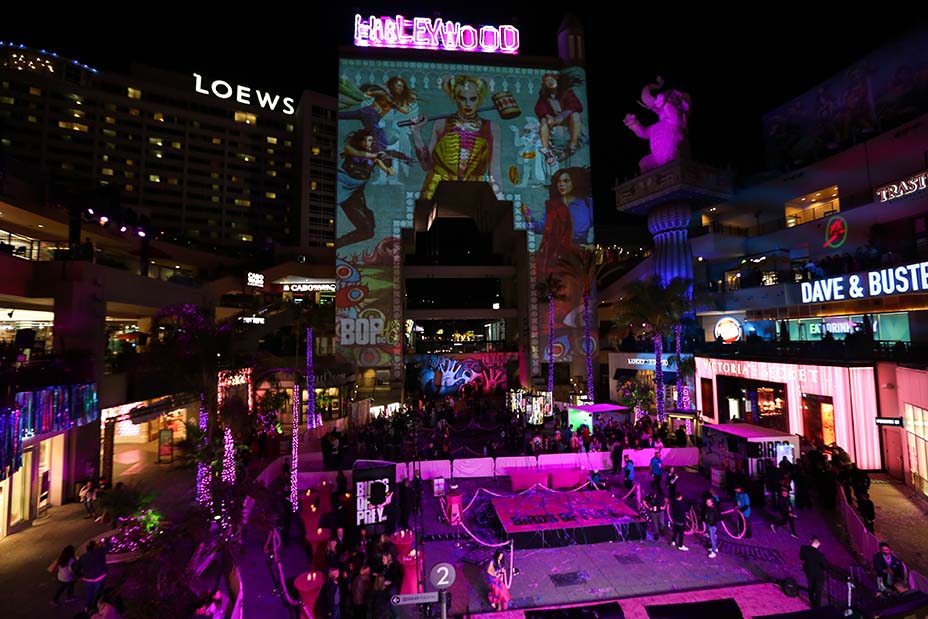 ? Splat Hair Color, which created limited-edition hair color products inspired by Harley and other characters. The company ran a sweepstakes awarding the winner a hometown screening for 50 of their friends. It was also on-hand for the #Harleywood event, adding a pop of color to people’s hair.

? Smashbox, which created a colorful set of movie-themed lipsticks and offered a free Harley tote to anyone buying one of those products.

? Triumph Motorcycles, which is using a partnership with the movie to promote its Street Triple RS model, which is ridden by Huntress in the film.

Additionally, Hot Topic offered a number of Birds of Prey fashion and other items for those who wanted to adopt the movie’s looks. Exclusive apparel collections were also available from Her Universe and Rooster Teeth.

PicsArt, the photo editing app, offered a tool that let users insert themselves into the movie’s key art.

TikTok creators could participate in the #WhatWouldHarleyDo video challenge whole users of Snapchat could add movie-inspired looks and effects.

Warner Bros. transformed part of Los Angeles into Harleywood in mid-January, with the area transformed into a Vegas-like space for a night as most everyone involved with the film as well as promotional partner companies, artists from the soundtrack and some of the big-name comics creators in attendance.

The cast and crew attended a promotional event in Mexico at the end of January, with the world premiere being held in London shortly after that, with WB releasing a video recap of that premiere.

Fandango’s MovieClips hosted an exclusive featurette with the cast talking about the insane characters and situations they find themselves in.

Users of Regal Cinema’s app could play the Poster Mayhem AR experience by scanning the movie’s poster with the app for a chance to win Harley’s mallet.

Online and outdoor ads used various arrangements of elements from the key art as well as videos, with social media ads featuring the trailers and other short videos as well.

Earlier this week the studio put a photo station in New York City’s Times Square, encouraging cosplayers and other fans to stop by to have their picture taken with the movie’s artwork. 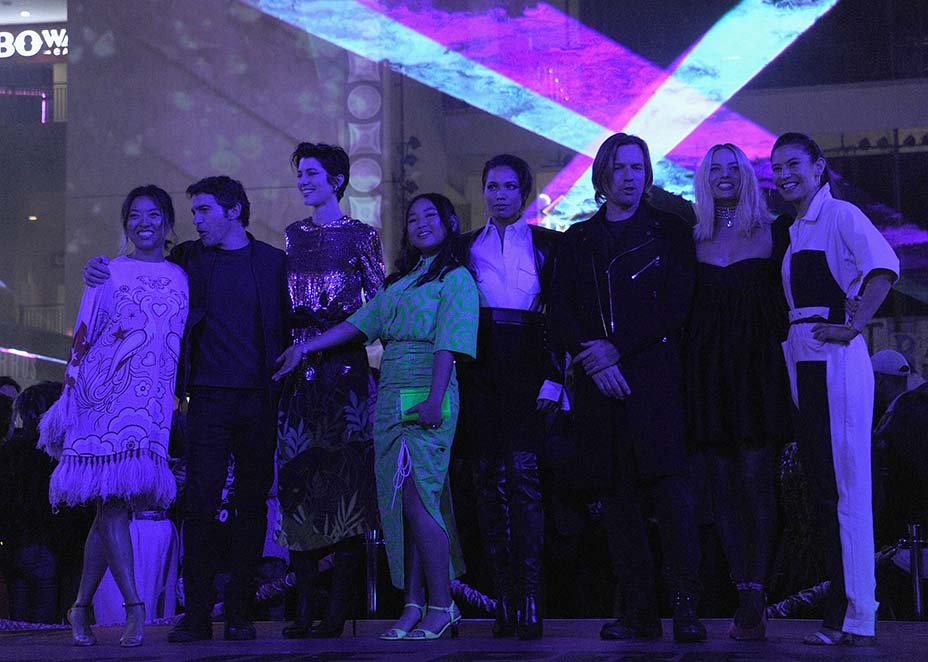 The campaign has created and reinforced a bright, colorful brand identity since it kicked off in September of last year. Those first few posters and the first first trailer seek to extend the neon-infused elements that were featured in the marketing for 2016’s Suicide Squad. That makes sense given the Harley Quinn connection, but the overall tone was still a little dark and dour.

Once the calendar turned over into 2020, though, things changed. The second half of the campaign is much more fun and over-the-top, more fully embracing the chaotic nature of Harley and the other characters as well as the situation they find themselves in. That change could just be the result of the marketing team becoming more comfortable with the movie itself or an effort to draw a clear distinction between Birds of Prey and the dark, nihilistic campaign for the Joker.

As the promotional partners — including hair, nail and lip color brands — as well as the lineup of artists on the soundtrack show, Warner Bros. is looking to appeal to the movie’s target audience of young women who identify with Harley and the rest as icons of rebellion and independence. Making that message the centerpiece of the campaign has, it seems, helped build up excitement.