Continue to The Hollywood Reporter SKIP AD
You will be redirected back to your article in seconds
Skip to main content
February 28, 2018 6:30am
Logo text

Marvel’s Black Panther is at once a beautiful and fundamentally conservative movie. The director, Ryan Coogler, has enchanted audiences from all walks of life, including African Americans. So taken are they by the mythical land of Wakanda — its wealth, civilization and power — that many want to abandon their citizenship and become the subjects of T’Challa (Chadwick Boseman), the superhero panther and absolute monarch. In a world unconquered by white supremacy, Wakanda is the African American’s MAGA — Make Africa Great Again — dream come true.

This conservative fantasy world is very American. Born in the age of fascism, the superhero genre suggests that democracy and its institutions are not enough. Superheroes are necessary precisely because the forces arrayed against countries, even democracies, are too powerful. Crime, extraterrestrial visitors and evil geniuses demonstrate that the police and even the United States Army are impotent. An assorted array of superhuman vigilantes are necessary to protect humanity.

Relatively speaking, the conservatism of Wakanda is natural. Black Panther, T’Challa, got his power the old-fashioned way — aristocratic inheritance. His superpower and weaponry derive from the country’s unique heart-shaped herb and the metal vibranium. His powers would hardly be needed for protection against the African tribes surrounding Wakanda. They are for warding off the colonizers, who prey on other Africans and peoples of African descent. Rarely have subjects been so well protected.

The king’s subjects are well treated, too. In Hollywood’s Wakanda, women hold positions of power — the king’s sister, Shuri (Letitia Wright), controls the scientific and technological apparatus, and the fierce and stunningly beautiful female warriors, the Dora Milaje, protect and fight with their king.  His male subjects are largely ornamental and ceremonial, leaving them to nurse their desire for one of their tribesmen to become the Black Panther.

This conservative utopia where only one is free could easily be revolutionized into the world’s most powerful democracy. Wakanda possesses the magical metal vibranium and the knowledge of how to grow enough of a heart-shaped herb to transform the king’s subjects into soldier citizens. The Black Panther is brilliant but only so enlightened; he cannot imagine a nation of black panthers to defend all of Africa from earthly and galactic enemies. The power is conserved for one king and one people.

It takes one who grew up in the belly of the colonizer, Erik Killmonger (Michael B. Jordan), to grasp the true revolutionary power of Wakanda. The offspring of a slave descendant and an unconquered Wakandan prince, Erik grew up nurturing two things: the right he had to claim the throne and his father’s belief that vibranium could be used to aid the struggles of blacks in the African diaspora against global white supremacy. Yet to realize his dreams, he becomes a killer in the army of the colonizers. He becomes known as Killmonger, a testimonial to his rapacious ability and desire to take human life. 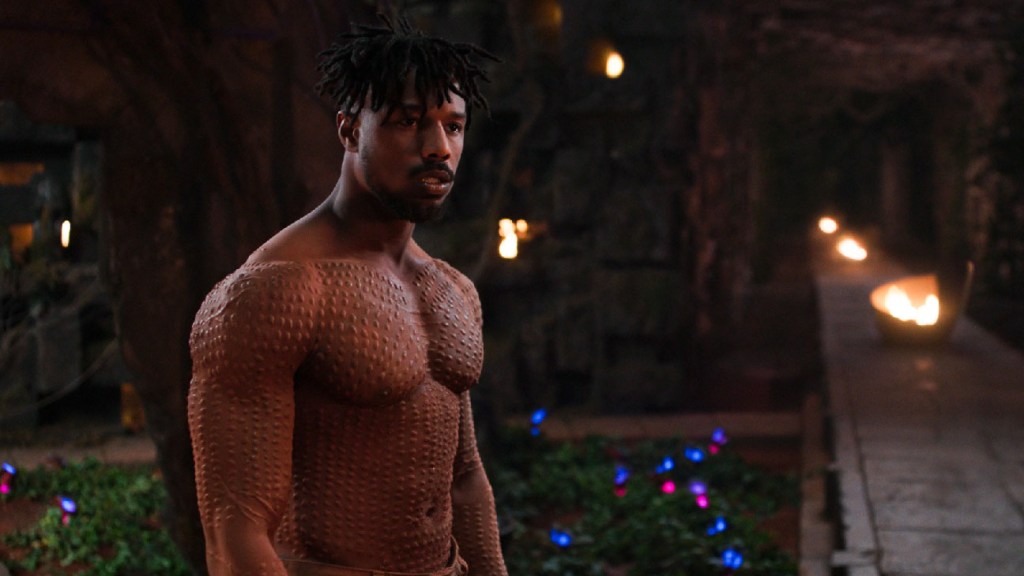 The would-be liberator of the Black World has respect for neither Wakandan tradition nor Western democracy. Bearing the marks of an unconquered Wakandan, he seizes his birthright and makes his battle plan. As if to prove he is a conquered African American pretending to be aristocracy, he rules as one unaccustomed to power. All must bend to his will and vision. In pursuit of power and racial liberation, he kills women and family alike. Rather than expand the cultivation of the heart-shaped herb, he orders its destruction. His is the last reign of the Black Panther. He would end global white supremacy, but there would be no happily ever after. No future king, no democracy, no nothing. Destruction is the vision of the good life. He appears as an American stereotype of unparented African-American hate.

As in all truly conservative tales, the people come to their senses and rally around their rightful ruler. Born to kill and die, Killmonger is defeated and insists on death, invoking his ancestors who jumped over the side of the slave ship. But the unshakeable truth is that his ancestors did not chose death over slavery. In death as in life, he falsely claims what he sees as a noble inheritance. The rightful king, T’Challa, enlightened by the great women surrounding him, the Patriarch of Wakanda, now understands. He vows to do better by the victims of white supremacy.

Far from repulsing the African-American audience, Black Panther taps into the tendency to romanticize the Great Kingdoms of precolonial Africa. Black wealth and power wielded against white colonizers has made Killmonger an instant culture hero. Wakanda and the Black Panther resonate with a community who lived through a black presidency and concluded democracy itself is not enough.

'Black Panther': When Will African-American Films No Longer be Considered Unicorns?

Daryl M. Scott is a professor of history at Howard University and the author of Contempt and Pity: Social Policy and the Image of the Damaged Black Psyche, 1880-1996. From 2013 to 2015, he was the Centennial President for the Association for the Study of African American History.

Why Didn't 'Black Panther' Get a TV Show 20 Years Ago?