In a comic book mythology that features a villain whose actual birth name is “Victor Von Doom,” it’s certainly possible that Erik Killmonger’s moniker wouldn’t raise eyebrows with anyone at the local DMV. But, it turns out, the bad guy at the heart of the Black Panther movie has a complicated history to unfold in his comic book incarnation — one that involves kidnapping, retconned parentage and more than one return from the afterlife.

The character is enjoying new levels of popularity thanks to Michael B. Jordan’s complex and captivating performance as the character in Black Panther, but Killmonger’s story begins long before the actor was even born.

Originally appearing in 1973’s Jungle Action No. 6 — created by Don McGregor and Rich Buckler — the first draft of Killmonger’s comic-book past ties him not only to T’Challa’s origin as the Black Panther, but also the hero’s first appearances a decade earlier in Stan Lee and Jack Kirby’s Fantastic Four series. Killmonger, it’s revealed one issue after his debut, was a native Wakandan with a particular grudge that made him an unusually sympathetic character for the period. 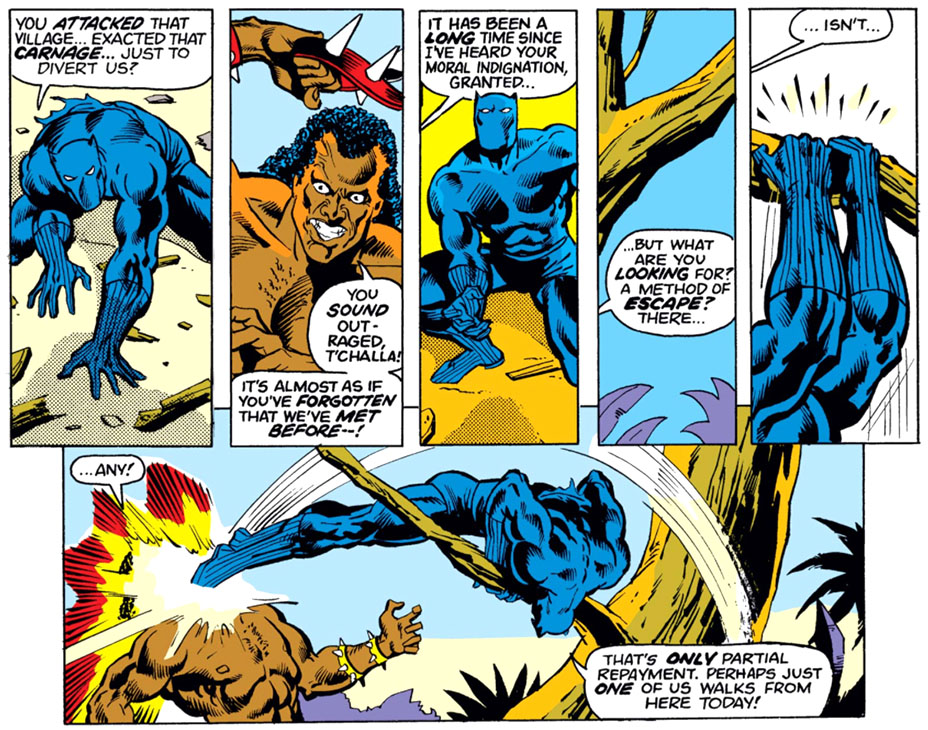 Killmonger — who was born N’Jadaka, following the vague naming conventions of Wakandans established at the time — had been beaten and taken as a slave by the same invasion force attempting to steal the vibranium ore that would be responsible for the murder of T’Challa’s father. This was a retcon of sorts. The raid, led by Ulysses Klaw (Andy Serkis in the movie), had originally been shown in 1966’s Fantastic Four No. 53 but had not included N’Jadaka’s kidnapping. The retcon gave Killmonger a reason to hate T’Challa and want revenge on Wakanda; he had been essentially kidnapped by Klaw’s raiders as they retreated, abandoned by his countrymen and his ruler.

According to McGregor’s version of events, N’Jadaka escaped upon Klaw’s return to the U.S., changing his identity and attending M.I.T. before returning to Wakanda at a time when the Panther was in the U.S. as a member of the Avengers, with the aim of taking over the country in his absence. Subsequent versions of this origin would suggest that N’Jadaka had been a child at the time of Klaw’s attack, and that it was his father who had participated in the attack, dying in the process and therefore instilling a need for revenge in his father’s name in the young boy’s heart.

Either way, Killmonger’s motivation was simple: He was, at once, an outsider and insider to Wakandan culture, and someone whose origins as a villain were tied to T’Challa’s as a hero. No wonder, then, that he would return on a number of occasions to cause trouble for the Panther, even going so far as to transcend death (twice!) in order to do so. 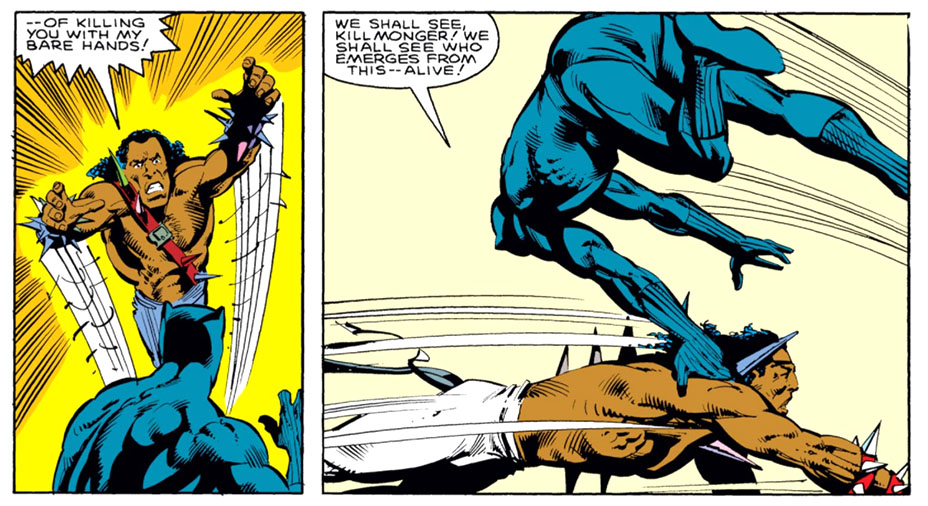 Indeed, it was an Iron Man villain, of all people, who’d help with the last part. McGregor actually killed Killmonger at the end of his initial run on the Black Panther strip in 1975, but Erik found himself resurrected in 1982’s Iron Man Annual No. 5 thanks to an intervention by the Mandarin, and then again in 1996’s Over the Edge No. 6 after the first attempt didn’t take. (The Mandarin, perhaps realizing that Iron Man villains don’t traditionally bring people back from the dead, wasn’t part of that second comeback.)

In current comic book continuity, Killmonger is in the midst of his third death, being killed in 2008’s Black Panther No. 38 after yet another failed attempt at a coup for the kingdom of Wakanda. Of course, if there’s one thing his comic book career has demonstrated, it’s that death is little more than a minor interruption in his quest for power.

In the film, Jordan’s version of the character shares a number of similarities — including a tragic past and an upbringing in the U.S. Given his choice to forego the chance to be saved at the powerful conclusion of Black Panther, it seems that any attempt to bring him back a la the comics would only cheapen that decision. It seems the film version won’t quite have the staying power (in terms of coming back from the dead) as the comic book version, but he certainly made an impact.