Like all Marvel Cinematic Universe films before it, Black Panther isn’t truly over once the credits begin to roll. The film contains two bonus scenes that not only complete the story, but also set up what’s to come.

The first scene is really more of a direct coda to the movie — T’Challa is at a press conference, announcing that Wakanda plans on sharing its knowledge and resources with the world.

The second scene? Well, that’s a little bit more complicated, and involves comic book history and someone known as the White Wolf.

The camera, starting out in a first-person perspective, shows someone waking up to a gaggle of curious Wakandan children, who immediately laugh and scatter. An unknown protagonist stands up and exits a hut — clearly we’re not in the metropolitan area of Wakanda, but in Wakanda all the same. Now fully revealed, Bucky Barnes (Sebastian Stan), armed and dressed in robes, walks towards the edge of a lake where T’Challa’s sister Shuri (Letitia Wright) awaits. They greet each other, with Bucky thanking Shuri for her help.

Yes, Bucky is back — just in time for May’s Avengers: Infinity War. Viewers last saw him in 2016’s Captain America: Civil War, when he moved to Wakanda for the safety of the world because he’d been brainwashed with code words that could turn him bad at any moment. Only Wakanda had the technology to potentially cure him, and in Civil War it appeared when he went into deep freeze that he could be fixed.

Enter Shuri. Confirmation that she’d be the one to help Bucky came earlier this year with the quietly released Infinity War prelude comic, which showed that Shuri worked to reverse engineer Bucky’s brainwashing without “deleting” his actual personality out of his brain.

This moment, apparently, takes place some time before Black Panther proper, as Shuri jokingly fires off a line about having “another broken white boy to fix” when Everett Ross (Martin Freeman) is unceremoniously dropped in to her lab for medical care in the movie.

So now we have Bucky made whole again — at least mentally — after Shuri’s work proves successful. But that’s far from the end of the story.

This Black Panther post-credits scene offers an interesting turn in Bucky’s independence as a character in his own right, and signals Marvel may be eyeing him for bigger things to come. It’s his first appearance in a non-Captain America branded movie, save for 2015’s Ant-Man (which included a scene that would ultimately end up in Civil War). He’s also been prominently featured in trailers for Infinity War.

A larger role for Bucky seems a long time coming. Steve Rogers (Chris Evans) himself is obviously the focus of the Captain America trilogy, but Bucky is largely the engine, oscillating between damsel in distress and tragic bad boy tropes in equal measure to provoke Cap’s heroism at every turn. In fact, the fan response to Bucky and Steve’s onscreen dynamic has been so fervent that it even inspired a nationally trending #GiveCaptainAmericaABoyfriend hashtag on Twitter back in 2016, where fans campaigned for their relationship to take on a more canonically romantic angle. (Sadly, and rather unsurprisingly, Marvel Studios did not heed the impassioned campaigning.) 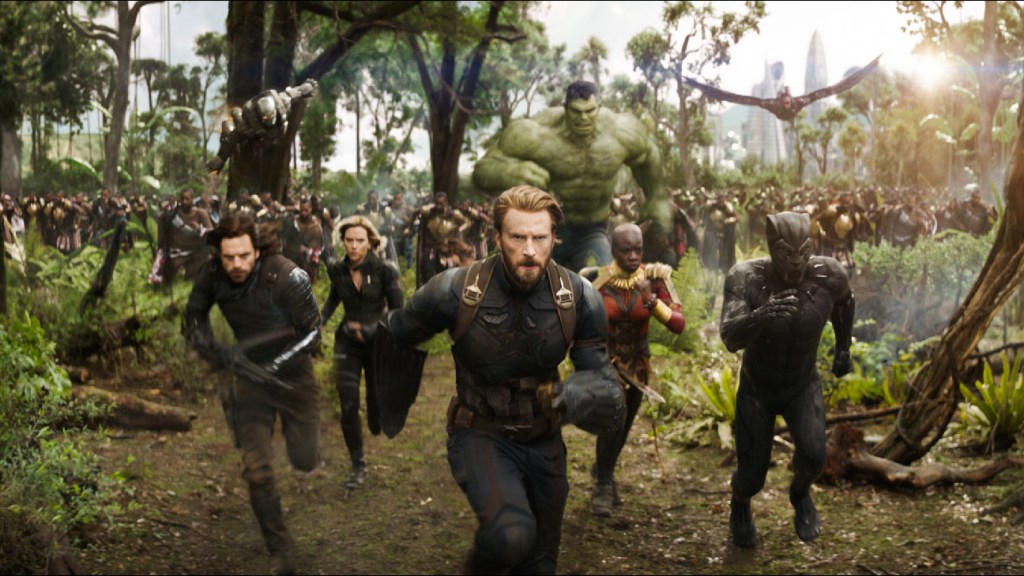 Bucky’s role as Captain America’s catalyst puts him in an interesting position going into Infinity War. In many ways, we’ve seen three different iterations of the character across three different movies, but his transformations have always been in service to Steve’s story, rather than his own. However, the MCU has been decidedly unsubtle about teasing a future for Bucky outside of Cap’s shadow.

There’s precedent in the comics for Bucky to take over as Captain America, as he did when Steve Rogers temporarily died following the events of the 2006-07 Civil War event. Onscreen, Bucky has been given a chance to pick up the iconic shield for himself, however briefly, multiple times — either as a wink, or as a teaser. Now that Chris Evans’ contract with Marvel Studios is potentially coming to an end, there just might be a vacancy for Bucky to fill — and certainly a featured role in an Avengers film is a great place to kick that story off.

The Story Behind Michael B. Jordan's 'Black Panther' Villain

There’s another (less likely) possibility, should Bucky continue on post-Avengers 4 (2019).

Some of the Wakandan children scattering around Bucky’s feet as he wakes up playfully lob a nickname his way as he walks towards Shuri, calling him “The White Wolf.” In Black Panther lore, that name has belonged to a person who doesn’t have an official MCU counterpart — a white man who was raised in Wakanda under the care of T’Challa’s father, T’Chaka. The man, known as Hunter, was adopted into the royal Wakandan family after the accidental death of his own. He grew to become the leader of the Hatut Zeraze, an elite group of Wakandan special forces.

Stan himself has gone on record saying he’d like to continue exploring the character, potentially as Cap. It seems that this Black Panther tease is just the start of much more to come from Bucky.

The Story Behind Michael B. Jordan's 'Black Panther' Villain