When Christopher Nolan’s Batman movie The Dark Knight, released in 2008, failed to capture a best picture nomination, the resulting hand-wringing caused the Academy to expand the category from five films to as many as 10. The idea was to make room for popular yet critically acclaimed blockbusters, a goal that proved elusive — until this year, when Marvel’s Black Panther became the first comic book-based movie to earn a slot on the list of hopefuls for the Academy’s top prize.

The movie, centered on Prince T’Challa and his ascension to the throne of the fictional African nation of Wakanda, became the first big-budget tentpole and first comic book movie to feature a primarily black cast, and with a black filmmaker (Ryan Coogler) behind the camera. The movie took the world by storm, not just at the box office, where it made $1.35 billion, but culturally too, becoming a beacon for black audiences even as the phrase “Wakanda Forever” turned into a flag for all people.

Kevin Feige, who has had a producer credit on every Marvel movie since Iron Man, spoke to THR about breaking the glass ceiling, the first draft of the Panther script and his favorite scene in the movie.

It’s taken a long time for comic book movies to be taken seriously. What does 20-year-old Kevin think of this?

I watched the awards on the East Coast when I was growing up, staying up way past my bedtime to do so. I don’t know if I’ve ever told anyone this, but I and my friends, when we were in college, went to the bleachers at the Dorothy Chandler Pavilion, for about 12 hours, to wait and watch the people come in. Six hours in, we were like, “We are not waiting all this time,” but then it became an endurance test. We ended up leaving when the first stars started to arrive. That’s how much I cared about [the Oscars] and what it meant to be recognized.

When you looked at the slate all those years ago, and looking at all the characters you have, what about Black Panther stood out?

We’ve been thinking and dreaming about making it since almost the dawn of the studio, with hints of Wakanda going into movies back as early as Iron Man 2, because of the character of T’Challa. Stan Lee and Jack Kirby 60 years ago created this character in the middle of the civil rights movement, to have a person of color from Africa come in and be wealthier, more intelligent and stronger than the primary heroes in the Marvel Universe at the time. To be able do that on the big screen and explore the world of Wakanda and see a cast of characters that is entirely people of color, that was what excited us. 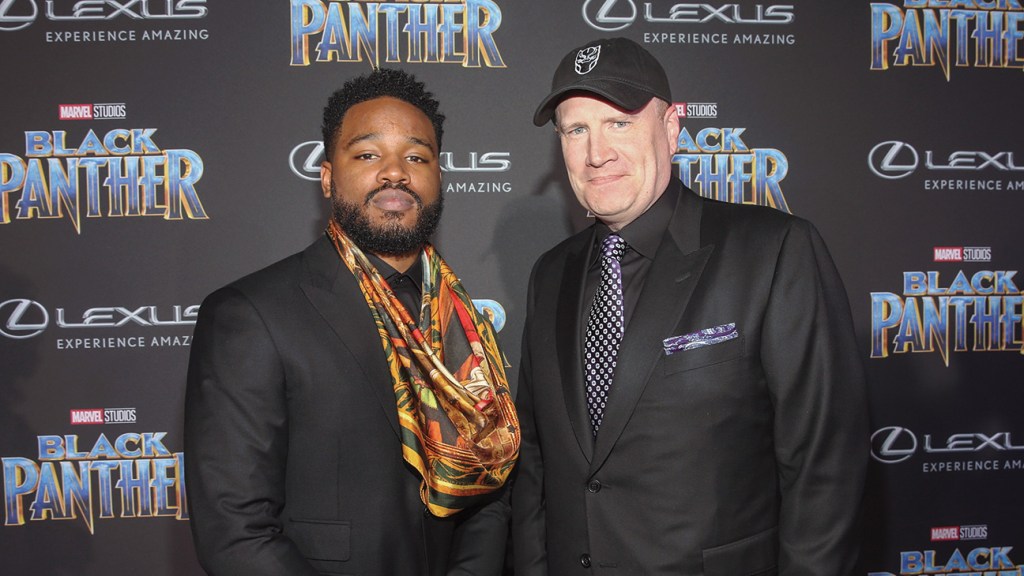 Was there anyone who surprised you by taking on unexpected roles on the set or production?

It is not exaggeration to say all of them. Certainly our fearless leader, Chadwick Boseman, and the nobility of how he approached the role and the ideas he had. But also Danai [Gurira] and Lupita [Nyong’o], who both lived in Africa for many years and brought that culture to Ryan, that young filmmaker from Oakland, [to convey] some of that importance. One of those early notes was, “There would never be a gathering of this many people in Africa and not have singing or chanting or dancing be incorporated into the ceremony.” And an expert was brought in at their request, and it just brought the entire sequence to life.

At what point did you realize that this movie was going to attract a community that has historically been underserved in this genre?

It was in those early discussions that we had with Ryan, that he had with Nate Moore, our executive producer at Marvel who brought him in to meet with us. And that amazing line, that he and his co-writer, Joe Robert Cole, wrote for Killmonger (Michael B. Jordan) as he lay dying outside the vibranium mines looking over Wakanda. T’Challa says, “I can try to heal you,” and he says, “Why, so you can lock me up? Just bury me in the ocean with my ancestors who jumped ships, ’cause they knew death was better than bondage.” That was in the first draft. It was one of the best lines we ever read. We said, “There are going to be a lot of revisions, but don’t touch that line.” And Ryan said, “That’s the line I thought you’d tell me to cut.” And we said, “On the contrary, keep it and build more of the movie around it.”