Letitia Wright is on the cusp of a rare moment.

The actress has earned praise for her work in the Black Mirror episode “Black Museum” and in other roles, but she is poised to be introduced to her biggest audience yet with this week’s Black Panther, which is tracking to be a massive box office success (in addition to being a cultural phenomenon).

Her character, Shuri, is a brilliant scientist and younger sister to T’Challa (Chadwick Boseman). As the head of the Wakandan Design Group, she uses her genius to help her nation and creates gadgets that aid her brother as the Black Panther. In a film packed with breakout characters, Shuri is managing to stand out — and already has fans asking if down the road she could take up the mantle of Black Panther, as the character does in the comics.

Boseman notes they had a strong relationship from day one.

“I looked up at her and she was like, ‘Why you being so serious?'”  he recalls with a laugh. “It’s what little sisters do to their big brothers. I just enjoy having her around. Her joy, her spunk, it gave us all something. It gave us all a little piece of, I guess, the inspiration for the movie that we needed.”

It’s not lost on Wright that her role is a unique one, and in a conversation with Heat Vision she opens up about playing a black girl in the STEM field, her sibling relationship with Boseman and what’s left of her big year (including roles in March’s Ready Player One and May’s Avengers: Infinity War).

Have you given thought to how your life might change once the world sees this film and how you might have a much higher profile?

My aim is just to remain as humble and as godly as I can be. Because for me it’s still another day at the office, like it’s just a role that I’m a vessel for. … My only hope is that it can just allow me to do more roles and more projects that people can like and I can continue to contribute to the world in a positive way.

You’re playing like a really badass engineer. Shuri is the head of the Wakanda Design Group, and executive producer Nate Moore actually said that you’re the smartest person in the Marvel Cinematic Universe. She’s smarter than Bruce Banner, smarter than Tony Stark, smarter than T’Challa. How exciting was that for you to be playing someone as intelligent as Shuri in the STEM field, where black women and girls are underrepresented in general?

I grew up seeing so many stereotypes on TV and I didn’t want to play that as well. This moment right now is years of prayer that’s coming together to play such a character that … hopefully a lot of people can be inspired by. So for me it’s a dream come true really. It’s something positive in the world, and that’s the type of person I am. It doesn’t necessarily mean that that character is not flawed, because I just played a character in Black Mirror that’s kind of crazy. But with this film, it can spark the brain of another kid that loves technology and loves science and lets them see that that’s really cool and encourage them to create the next gadget that’s going to help cure a disease or something. …

So all in all it’s positive, and also for the fact that, for me, it’s about spreading love and light as well. Shuri brings that to the screen. When people see Shuri on the screen they’re just joyful, they leave the cinema like happy, like, “Yo, she made me laugh.” … I’m proud to be a young black girl doing this, but also as much as this is for young black women to be inspired, [it’s for] all women of all ethnicities, of all races to be inspired. And young boys too, young men too from all walks of life to be inspired by this film.

You and Chadwick are really convincing as brother and sister in the film, particularly with your character always teasing him. Were you able to spend much time with him before shooting to make sure that you guys had that bond, or was that one of those types of situations where soon as the cameras were on it was just already magic?

The latter, it’s like it was already there … I found out on the night of our premiere, at the party, I think it was Chadwick’s agent was saying that after the screen test he [Boseman] was really saying that he really hoped that I would be his sister. And that was wonderful for me to know, because prior to meeting him, I really felt like he would be my brother. I just felt like there would be a soul connection and there was. And immediately when I met him for my screen test it was like, “Okay, this brother’s got some soul.” … Days on set where I can see like, “Okay, he has a huge day, he’s really just focused”, I would just go to him, give him a hug, tell him I love him. And then he’ll just be like giggling in the corner or smile. And that’s how we are. He does it for me too. He would just come up, give me a hug and then just we share love with each other knowing that we did the part and do what we have to do. So what you guys see on screen is literally, it’s pretty much like, “Oh, man, this is ordained.” We haven’t had to go out and like really sit down and like, “Oh, my God. I have to get to know him.” No, it was just there. It’s literally just there. 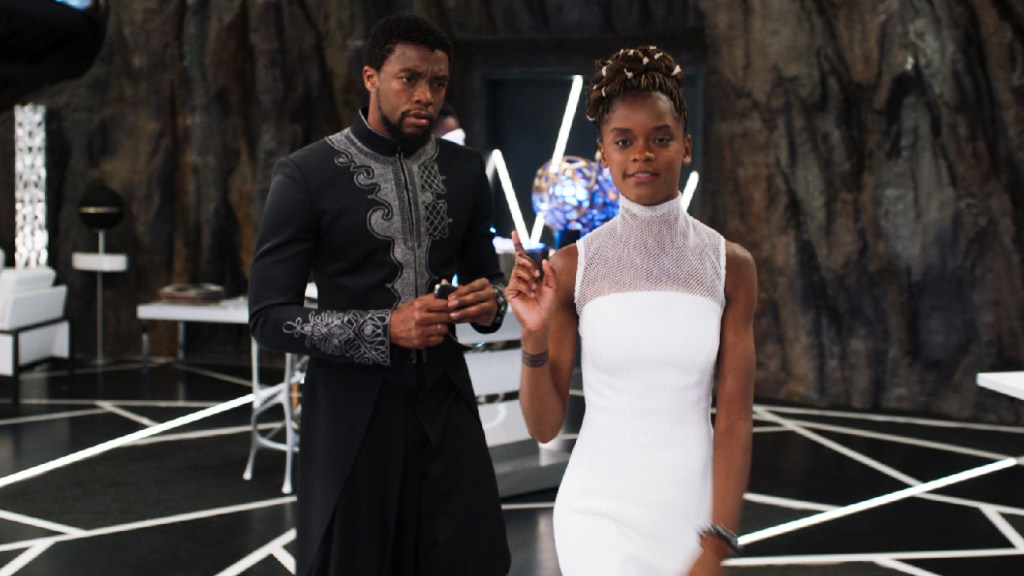 There’s a big battle in the third act that you had key role in. How much does it take to prepare and shoot? And how was the process in general to get trained for it?

It was a lot of training, a lot of prep. Some days was we trained so much to the point where maybe the sequence that we thought we were planning for months wasn’t used, and we did have to create something fresh on-set. But everybody dedicated, everybody worked hard — from the lighting guys, to the cinematographer, cast, crew, everybody just brought a lot of effort into it.  So yeah, it’s one of those big scenes, and we hope that you guys really, really like it.

It’s not too much of a spoiler to say Shuri has more to do in the future of these films. How do you think the events of Black Panther helped set up future events in the Marvel Cinematic Universe, like Infinity War?

I think it’s a good setup. It just shows that she had something to contribute in terms of her wisdom and her knowledge and just her dopeness. So yeah, I think it sets it up really, really nicely to just be able to contribute wherever she’s needed in the Marvel Universe, if she’s needed anywhere else. It’s a really good place to be. 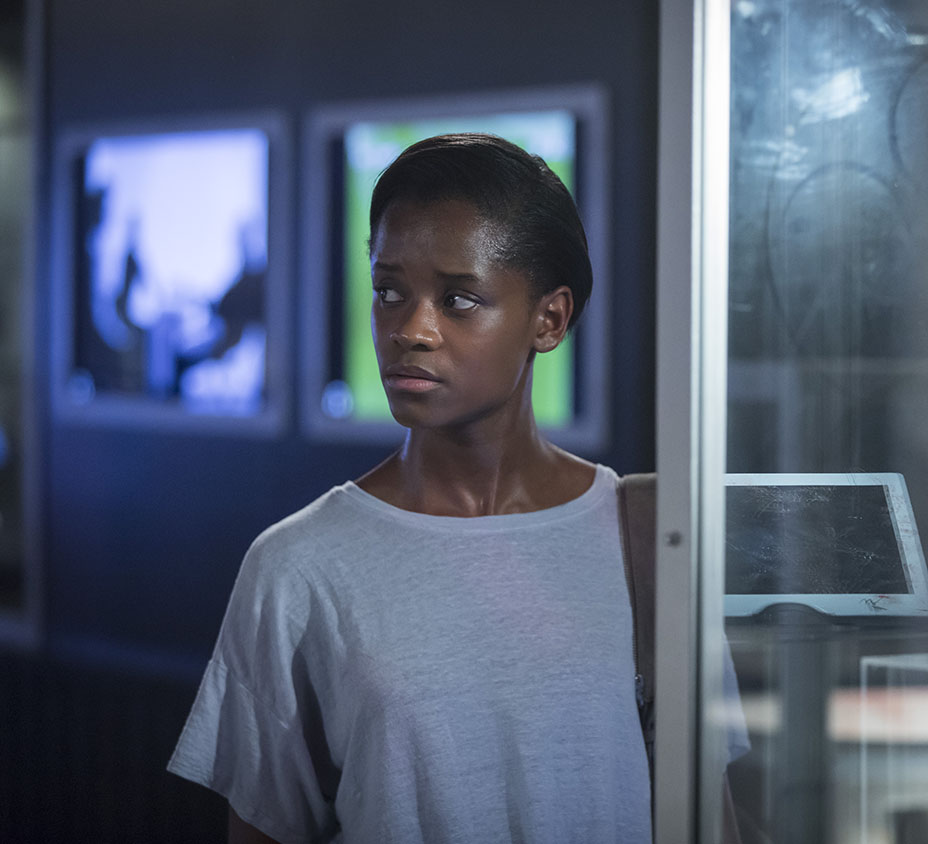 You mentioned a little earlier that your prior role in Black Mirror, the “Black Museum”episode, your character is kind of crazy. One thing I’ve noticed is that your roles have been very varied, from this role to what you’re doing for with Black Mirror as well as what’s going on with Ready Player One coming up in March. What’s your process to pick specific roles? And what type of roles catches your eye when you’re thinking about new projects to act in?

The writing, really. … “Black Museum,” when I first read that, I was like, “Okay, I think I want I want to be a vessel for this. I want to be able to tell this story.” Because I felt it was important, especially with the ending scene as well, what you can see happening reflects a lot.

Black Mirror is in the can. Black Panther has already been shown to audiences and Ready Player One is coming out in March. What’s coming down the pipeline for you for the rest of 2018?

For the rest of 2018 there’s the release of Avengers [Infinity War] coming out, so we have that. And then after that I am going to really, really take a step back and think about what’s next. I’m not going to rush into anything; I’m going to really just take a step back, travel a little bit more and then live life. Restore myself, and just get my mind focused on what’s next, what’s the next character I’m going to be a vessel for, because but that’s more important for me to understand. And I hope whatever the next, again, it makes a positive impact and people like it.

Black Panther is in theaters now.