The end of Black Panther will ensure that one question will be on moviegoers’ lips this weekend: “When will we get a solo movie for Shuri?” Here’s the interesting news: The comic book history of the character suggests that she might be in line to take over the movie series she’s already in.

Although T’Challa has been around for more than half a century, his little sister is a far more recent addition to Marvel’s comic book mythology, debuting in 2005’s Black Panther No. 2. Created by Reginald Hudlin and John Romita Jr., she was immediately shown to be T’Challa’s equal in passion and bravery, if not necessarily luck — her very first appearance revealed that she had wanted to become Black Panther before T’Challa took the role, being arguably more eager for it than he was. (Wakandan society as a whole, however, preferred the male.)

The film contains a few hints that Shuri (Letitia Wright) could be a natural for the Black Panther. After all, she designed T’Challa’s suits and goes into battle against Killmonger (Michael B. Jordan). But as the film ends, she’s shown living in Oakland, someone who will bring Wakandan technology to the wider world.

In the comics, her path took a more direct approach to the Panther mantle. 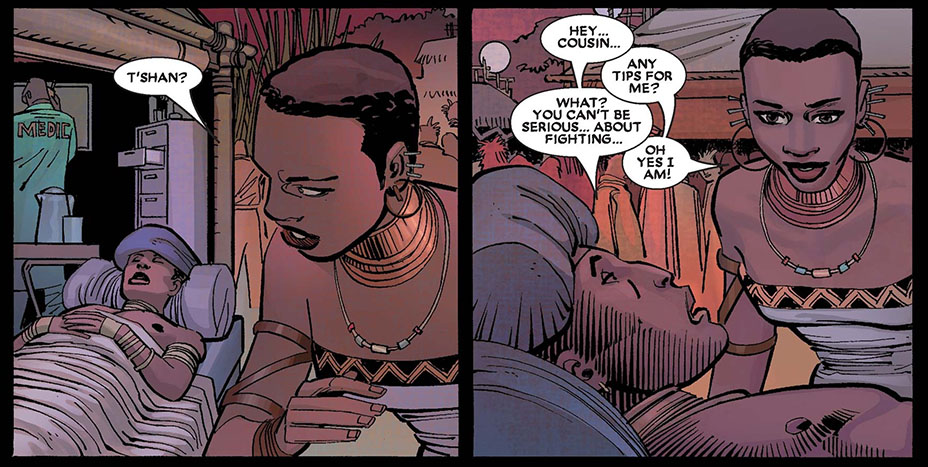 Through a series of (mis)adventures, Shuri proves herself to be a capable fighter, and eventually finds herself nominated to take the mantle of the Black Panther for herself when T’Challa is left in a coma following a battle. There’s only one complication to this dream-come-true scenario: The Panther God, who essentially bestows the powers on each new Panther, rejects her based on her earlier jealousy of her brother, leaving her with the name and the responsibility of defending Wakanda, but not the same set of skills her predecessors possessed to do the job.

Well, not immediately, at least; the fact that she managed to save Wakanda from a coup while banishing a supernatural threat that also happened to restore T’Challa to health was enough to prove to the Panther God that Shuri had what it took to be a true Black Panther, and she ended up a Panther in power set, as well as name.

Shuri’s time as Black Panther was relatively brief; she took on the role in 2009, and essentially shared it with T’Challa through some never-fully-explained mechanics for the next five years in a way that allowed for him to call himself Black Panther and appear in multiple stories, while she remained in Wakanda actually fulfilling the role of leader of the nation. It’s in that position that she met her end, with the character dying in 2014’s New Avengers No. 24 as she fights Proxima Midnight. (A pairing that’s possible onscreen in this summer’s Avengers: Infinity War, curiously enough, as both Shuri and the Thanos henchwoman are set to appear in that film.)

That wasn’t the end of the character, however: when Ta-Nehisi Coates and Brian Stelfreeze took over the Black Panther series in 2015, the resurrection of Shuri was one of the first subjects they addressed. Mixing mysticism and comic book science, Shuri was restored to life with new purpose and a new position — she now sits as part of the ruling council of Wakanda, complete with mysterious supernatural powers as the result of her experience. Sure, this doesn’t necessarily match the science supergenius as played by Letitia Wright, but there’s always a sequel to bring all this in when necessary — if not a spinoff movie, should Marvel Studios wise up quickly enough.