About 30 minutes before the stars of Disney’s and Marvel’s Black Panther and Thor: Ragnarok took to the Hall H stage at Comic-Con on Saturday, the worlds of Asgard and Wakanda collided backstage for the first-ever Marvel family photo of the two casts.

Nineteen members of the Marvel universe — led by Marvel Studios president Kevin Feige — posed for The Hollywood Reporter’s exclusive portrait backstage just moments before the studio’s presentation. From the moment they arrived, the room was full of laughter and hugs, as many of the actors were reuniting with their casts for the first time in months.

First to arrive was the Black Panther cast, most of whom hadn’t seen each other since wrapping the movie in April. Stars Chadwick Boseman, Michael B. Jordan, Lupita Nyong’o, Danai Gurira, Forest Whitaker and Andy Serkis — the latter flew in with his family from London just to be at Marvel’s panel — joined director Ryan Coogler (wearing a Stranger Things T-shirt) backstage.

“This is a real family moment,” Gurira told Nyong’o after an embrace.

And as the cast took photos amongst themselves, Coogler let some of his actors know about a fight sequence that Hall H and the actors would be seeing for the first time after taking the stage. It was very clear that they were pumped to see it for the first time.

Black Panther castmates Letitia Wright and Daniel Kaluuya (who was the breakout of horror-thriller Get Out) were attending Comic-Con for the first time. “It’s going to be wild, because I have no expectations at all,” said Kaluuya, who revealed that he was on set of another film when the first trailer for Black Panther dropped and his phone was flooded with texts.

With the clock ticking before the panel, the Thor cast finally strode in — Wright shook hands with Hiddleston, saying, “Nice meeting you, Tom. Now get your butts on the stage!” But it wasn’t that easy — everyone wanted to say hello and give hugs. Coogler and Thor helmer Taika Waititi embraced. Coogler also introduced his wife to Mark Ruffalo. (Tessa Thompson was the only castmember who couldn’t make the photo as she was on back-to-back panels.) 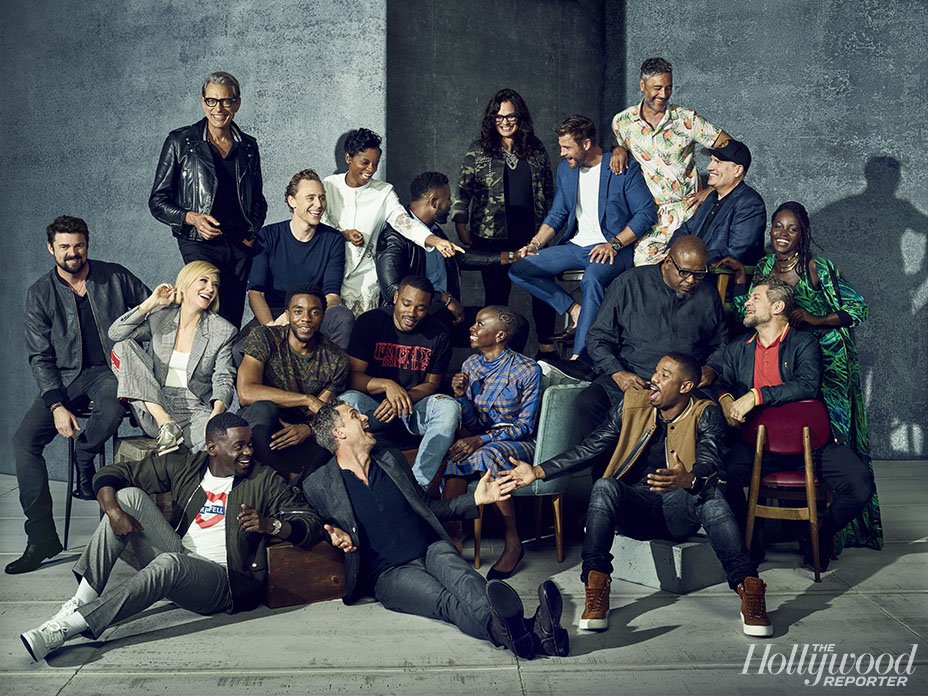 Some knew each other previously, some were meeting for the first time. Case in point: Hiddleston and Kaluuya. “I’m a big fan,” Hiddleston said to the Get Out star.

Blanchett, with son in tow, was last to arrive and as soon as she’d found her spot, photographer Christopher Patey began snapping away.

The combination of Waititi and Chris Hemsworth standing next to each other proved to be almost too much fun. Waititi was seen wrapping himself around the Thor star, and toward the end of the shoot, when Patey told them to get loose and have a little fun, Waititi took a leap…and broke off a piece of the set (KA-THOOM!), almost falling backward from on high. Luckily, Hemsworth’s strong grip held him fast.

When the photo was done, there were more hugs and catching up, even as the publicists tried to wrangle everyone to Hall H for the panel. They’d be a little late. But it didn’t matter. Because when they did take the stage, they blew the audience of 6,500 Marvel-hungry fans away with new trailers for both Thor: Ragnarok (hitting theaters Nov. 3) and Black Panther (Feb. 16, 2018). And the new fight scene from Black Panther (exclusively shown to the audience in Hall H), would bring the elated crowd to its feet. It was worth the wait.

Click the image below to see a hi-res version of the top image from the shoot.