There’s a moment in Bliss in which Greg Wittle (Owen Wilson) finally embraces his new reality. He cuts loose at a roller rink, knocking over people with powers he has discovered thanks Isabel Clemens (Salma Hayek), who tells him this world not real, so he might as well do as he pleases.

For the film’s stars, the scene required a skating coach, something Wilson didn’t think he needed. He assumed he could just “channel some 1979 Dallas birthday parties” the actor attended as a kid, but he soon found muscle memory was not kicking in.

Hayek, on the other hand, knew upfront she needed all the help the coach could give her.

“I was completely awful at it,” says Hayek. “Then something clicked when we were shooting. And I started to get better.”

Hayek and Wilson were competitive with each other during the whole shoot, especially the skating scene.

“Owen was like, ‘Woah, woah, woah! Don’t get better than me,'” recalls Hayek with a laugh.

At one point, the duo knocks over an older woman, a moment that filmmaker Mike Cahill wanted to include to show that Greg truly believes this world has no consequences.

“I had gotten a lot of feedback to cut out the old lady part of it,” says Cahill. “I found myself in this position where I have to keep explaining what the scene was about, because it wasn’t obvious.”

To Cahill, the scene took on extra emotional resonance, because if Greg believes his world is not real, could that extend to his daughter, Emily (Nesta Cooper)?

“He’s considering the world as if it were Grand Theft Auto, where there’s no need for moral investment,” says Cahill. “And then we introduce the daughter. Sonow suddenly there’s the conflict of the film, which version of reality is true?”

Cahill is known for directing his own scripts and has crafted films such as Another Earth and I Origin. With Bliss, he secured his two leads before either of them had read the script, thanks to 20-minute pitches with each of them. Hayek was struck by Cahill’s passion, and by the opportunity to play two different characters, one in the ugly world  where the film begins, and a polished scientist in the beautiful world audiences are eventually see. 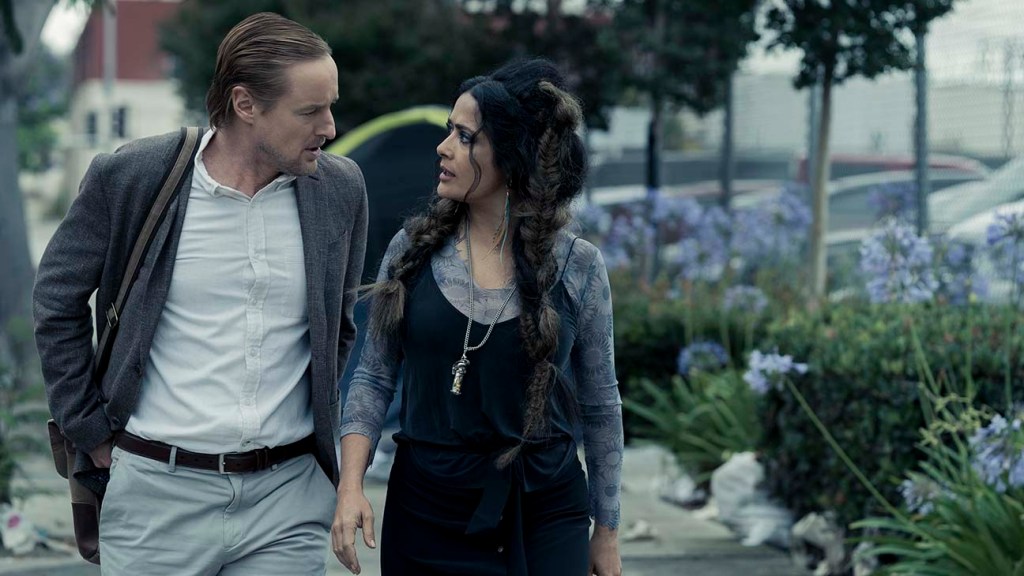 “He wanted my look to be like nothing I’ve ever been in the ugly world,” says Hayek. “You have to go (big) with everything, even if you go over the top. You have to bring the audience with you. Confuse them. Create the madness. And he never thought of anyone else but me to do it.”

Cahill saw Wilson’s Greg as someone for the audience to cling to.

“I feel like Salma is the storm,” says Cahill. “And Owen is the life raft. He’s the surfer in the storm you want to hold on to, as it’s going through this crazy chaos.”

Wilson and Cahill also saw the script as a different way to tackle addiction issues onscreen.

“From outside, it looks like this, miserable existence. What could somebody be thinking? But to the person in it, there’s a reason why they’re addicted,” says Wilson.

Hayek and Wilson had never socialized before working on Bliss, but they had a number of close calls over the years thanks to mutual friend Woody Harrelson. Hayek remembers one hot July in Los Angeles that saw her partying at Wilson’s house when he was out of town.

“Woody refuses to use air conditioning because it’s not good for the environment,” explains Hayek. “It was like 115 degrees. It was his birthday and he said, ‘I can’t take it anymore! Let’s jump the fence and go into Owen’s house!’ We did the party there.”

Wilson and Hayek two have since filmed roles for The Marvel Cinematic Universe. Wilson stars as Mobius in Disney+’s Loki, due out in May, while Hayek plays Ajak in Eternals, currently dated for November. It leaves open the possibility that perhaps their paths could cross again onscreen, something both would like to see.

Though Bliss leaves audiences with questions about which reality is true, Cahill hopes the audience can read the film either way.

Says Cahill: “Reality is just another word for, ‘What do you want to focus on in life? Where do you invest your heart, your attention?”

Bliss is streaming on Amazon now.