Bohemian Rhapsody is opening less than a month after Warner Bros. musical drama A Star Is Born bowed stateside to $42.9 million, and 20th Century Fox is hoping that moviegoers are ready to keep rocking.

The Queen biopic, which is tracking to debut in the $35 million to $40 million range, cost $55 million and sits at 58 percent on review aggregator Rotten Tomatoes. The movie stars Rami Malek as Queen’s lead singer Freddie Mercury.

The film was plagued by poor press during production based largely around the departure of original director Bryan Singer, who is said to have clashed with Malek and failed to return to the set after a break late last year. Singer is still credited as the director, though Dexter Fletcher — who also directed the upcoming Elton John biopic Rocketman — stepped in to finish production and editing.

Also raising concerns were early promotions that were criticized for allegedly downplaying Mercury’s sexuality at the expense of putting the band as a whole in the spotlight. That’s in part because the surviving members of the band have been heavily involved with the movie, including serving as producers and musical supervisors.

Malek as Mercury is shown in close-up — or at least half his face is — sporting the singer’s instantly recognizable mustache and sunglasses, the latter of which are reflecting the name of the band. (note: “Queen” is readable in the reflection, meaning it’s actually backwards on whatever we’re supposed to believe Mercury is looking at. Graphic design and branding don’t always mesh…) “Fearless is forever” is the copy here, conveying Mercury’s approach to his music and other parts of his life.

The second one-sheet uses an image meant to evoke Queen’s legendary “Live Aid” performance as we see Mercury in full dramatic pose set against the sun setting through the upper deck of Wembley Arena. A series of posters features each of the band members shown through the letters forming the title of one of their biggest, most recognizable hits.

Mercury is back on stage and playing dramatically to the crowd on two format-exclusive posters, the Imax version once more showing the Live Aid crowd at Wembley and the Dolby simply showing him looking larger than life with microphone in hand.

Concert footage gets the first trailer (17 million views on YouTube) from May started. There’s not much dialogue as it mostly just shows us scenes from throughout Mercury’s and the band’s career as they perform, record and so on while the music that we all know so well plays over it. The little bit of dialogue there is focuses mostly on a few key moments, such as recording the song of the title. It’s very much a teaser but certainly sets the tone of the movie being a grandiose biopic.

The second trailer (15 million views on YouTube) does a bit to address the accusations of “straight-washing” that followed the first one, but only a little. There’s more dialogue here as we see Mercury join the band that will go on to become Queen, as well as the frustration that radio stations aren’t playing — or won’t play — their songs. The creation of some of the band’s most iconic songs is still the focus, but there are hints as to Mercury’s private life, illness and other aspects of the singer that were all but missing the first time around.

One final trailer (5 million views on YouTube) came out just a week before the movie’s release date that focused on Mercury’s embrace of his — and the band’s — role as outcasts. Notably, while there is one person asking Mercury about his sexuality there are also a number of scenes of him in touching emotional moments with Mary Austin (Lucy Boynton) that seem to imply a romantic relationship between the two. 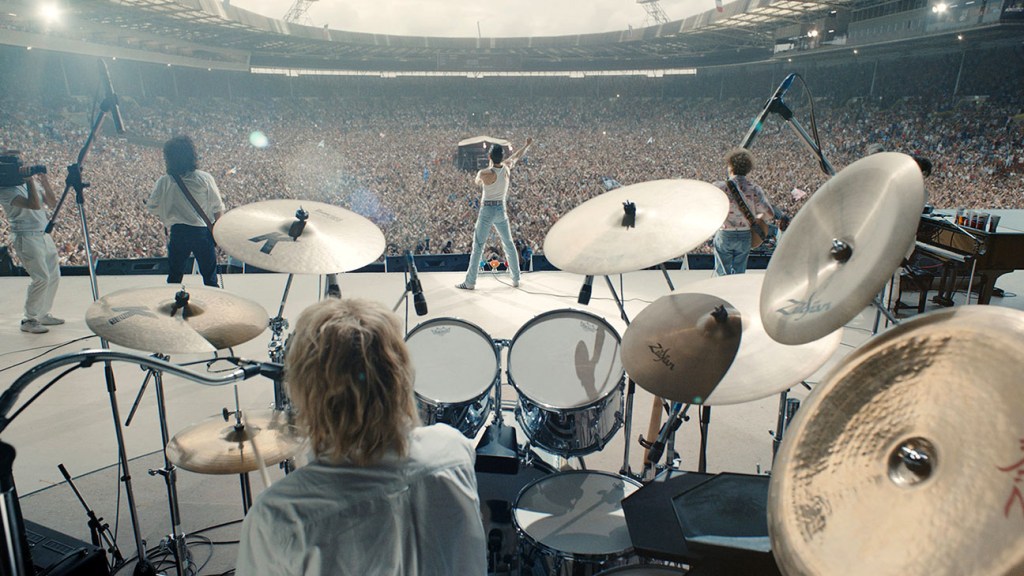 The first TV spot from early October positioned the movie as the story of misfits playing for other misfits and giving them something to believe in and somewhere to belong. An Imax spot used some of the movie’s more grandiose footage to sell people on experiencing it on the biggest of screens.

A featurette released in early October that had Malek talking about how he studied to truly embody Mercury was used as a Twitter promoted post. A sponsored Snapchat filter put users in Mercury’s shoes.

The studio also ran a contest, encouraging fans to visit PutMeInBohemian.com to upload their rendition of “Bohemian Rhapsody” for a chance to appear in the movie.

? Lucky Brand, which worked with Fox and the band to create a line of vintage Queen shirts.

? Guitar Center, which created a special section of their website featuring gear and equipment like what’s used by the band.

? School of Rock, which offered sweepstakes awarding a three-night trip to New York City including a concert at Madison Square Garden and more.

? Artistic Nail Design, which created a line of movie-themed cosmetics.

? Vilebrequin, which offered a line of movie/band-themed shirts and swimwear.

? Hot Topic and FYE both added movie/band-branded items to the usual selection of Queen shirts, posters and more.

In early September a video birthday message for Mercury was released using footage from the film. And the first clip showed the recording of the song that inspired the movie’s title. The genesis of “We Will Rock You” was the subject of the next clip from mid-October.

The movie held its world premiere screening at Wembley Stadium on Oct. 23, which was apropos given that venue was the site of one of Queen’s biggest shows.

The actor’s transformation into Mercury was the subject of a featurette from early October that had Malek and the filmmakers talking about how he fully embodied the singer. The whole cast hit on that topic in another featurette where they shared how they rose to the challenge of looking like they were actually the band.

One more featurette titled “A Tribute to Queen” hit just a few days before release that had artists like Shawn Mendes, Alessia Cara, Luke Bryan and others talking about the influence the band had on their own musical careers. 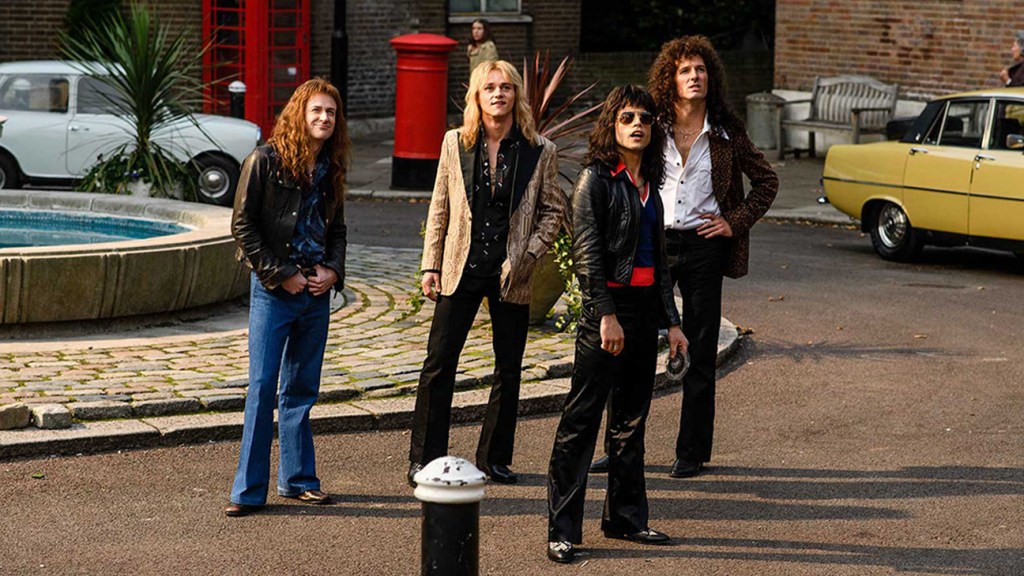 It’s hard to miss that the band’s logo is as prevalent throughout the campaign as the movie’s own title treatment. Similarly, much of the promotional material made available through retail partners was about the band as a whole, sometimes not including a specific callout for the movie.

Malek has been front and center in the publicity campaign to talk about how hard he and the rest of the cast worked to inhabit their roles. Mercury was a magnetic personality and remains a larger-than-life figure in the world of classic rock. The campaign puts him in the spotlight to be sure, but also plays up the rest of the band.