Ever since the first trailer for Lionsgate’s Bombshell debuted this past fall, depicting Charlize Theron, Nicole Kidman and Margot Robbie’s characters standing in tense silence in an elevator, there was immediate attention on the jaw-dropping transformation of Theron into former Fox News anchor Megyn Kelly.

Their makeup and hairstyling in Jay Roach’s Fox News drama was extensive, from Theron to fellow castmembers John Lithgow, who played Roger Ailes, and Nicole Kidman, who portrayed Gretchen Carlson. “The challenging part is everybody knows who they are and what they look like, so the balance is important,” Hiro explains. “If we do too much, it will look like Saturday Night Live. They have to be believable, subtle, and nothing standing out,” Hiro explains. 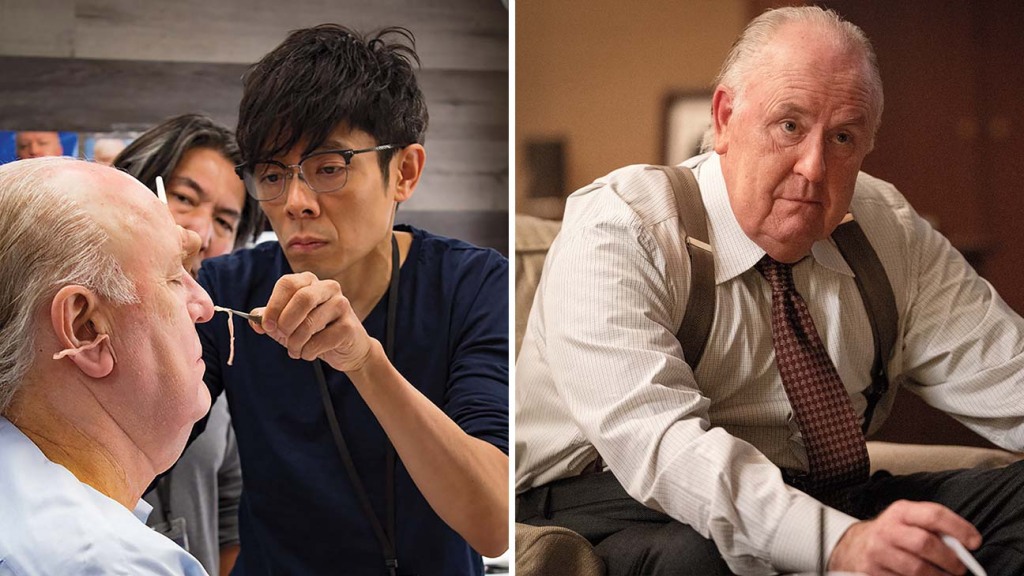 He started the assignment by taking a life cast of Theron and studying differences and similarities in the features of the famous actress and the recognizable journalist. “It’s impossible to make an exact copy of Megyn on Charlize’s face,” he says. “So I had to design the likeness on her face.” This included use of a nose plug, nose tip and eyelids, plus chin and jaw pieces. “Megyn’s nose is more upturned, so I had to create that silhouette. And the chin is much longer and stronger, pointier, and her jawline, too. Charlize has a round, softer look, so I had to emphasize that shape on the chin and the jaw and the eyelid. Megyn has a really heavy eyelid.”

She studied Kelly’s own use of makeup but “discovered that trying to mimic all the different ways that Megyn did her eyes didn’t necessarily help Charlize look like Megyn. We had to find the best way [of] structuring the makeup itself.” This included heavy liner, shading and lashes. “You’re creating a likeness as opposed to a replica,” Baker continues.

Theron wears various wigs and hairstyles during the course of the film. Morgan’s work included the on-camera look with long hair, “a curated look that Roger Ailes had created … a very specific Fox look.” Another wig featured Kelly with short hair. “She was trying to be taken seriously,” Morgan says. “That’s my take on it. And then [we see] her growing her hair a bit, getting it softer, being more acceptable to the audience.” There was also the off-camera look. “We see her without the extensions. You see her playing tennis. You see [her hair] is kind of trashed a bit, overly processed, darker root. She [wore], like, a mask of her Fox look, and then none.”

Hiro says the film employed digital makeup techniques in a few scenes “because it’s a budget issue. For example, the makeup started to fall apart. Should we stop the filming and do it again next day or just keep going and touch up later? That situation sometimes happens. … Digital helps. But, of course, our effort is always to present the makeup in the perfect condition [to be] filmable all day.”

It was a nearly three-hour process each day to transform the actress into Kelly. “The tough thing is that you’ve got to pass her muster of being able to do makeup when she’s a really good makeup artist herself,” says Baker. “It’s kind of nice that you have someone who knows. She brings a lot to the table. I found her extremely focused the whole time.”