Since its release on April 26, Avengers: Endgame has barreled through every record in its path, save for surpassing Avatar’s all-time box office of $2.78 billion.

In spite of a massive four weeks at the box office that has left the Marvel Studios title with $2.62 billion in worldwide ticket sales, Endgame faces an uphill battle, according to industry experts.

“It’s slowed down more than we all expected,” says Shawn Robbins, chief analyst at BoxOffice Media, who, after the film’s first weekend, had optimistically forecast Endgame crossing Avatar’s record in mid-June. He has since moved back his prediction to Labor Day, if it hits the record at all. Robbins notes that “no movie had opened on that level, globally.”

“Avatar was all about the marathon and now it’s about the sprint,” says Paul Dergarabedian, senior media analyst at ComScore, noting that the films’ releases could not be more opposite.

While Avatar‘s rise to the top was gradual — spending over 60 weeks in theaters and receiving a late summer re-release more than half-of-a-year after its December debut — Endgame did a “lion’s share of its business in the first few weeks,” says Robbins.

Endgame will also only face more competition at the box office moving forward. The release of Legendary’s Detective Pikachu and Lionsgate’s John Wick has slowed Endgame’s momentum at the international and domestic box offices, respectively. With the official start to summer movie season kicking off this Memorial Day weekend with the release of another Disney title, Aladdin, the market will only become more crowded in the coming weekends (see: Godzilla, Dark Phoenix, Toy Story 4).

“If it performs like it has been up to this point, there is about a $10 million to $20 million margin that falls half north and half south of Avatar,” says Robbins, adding, “But it would be surprising if Disney didn’t get it there somehow.” 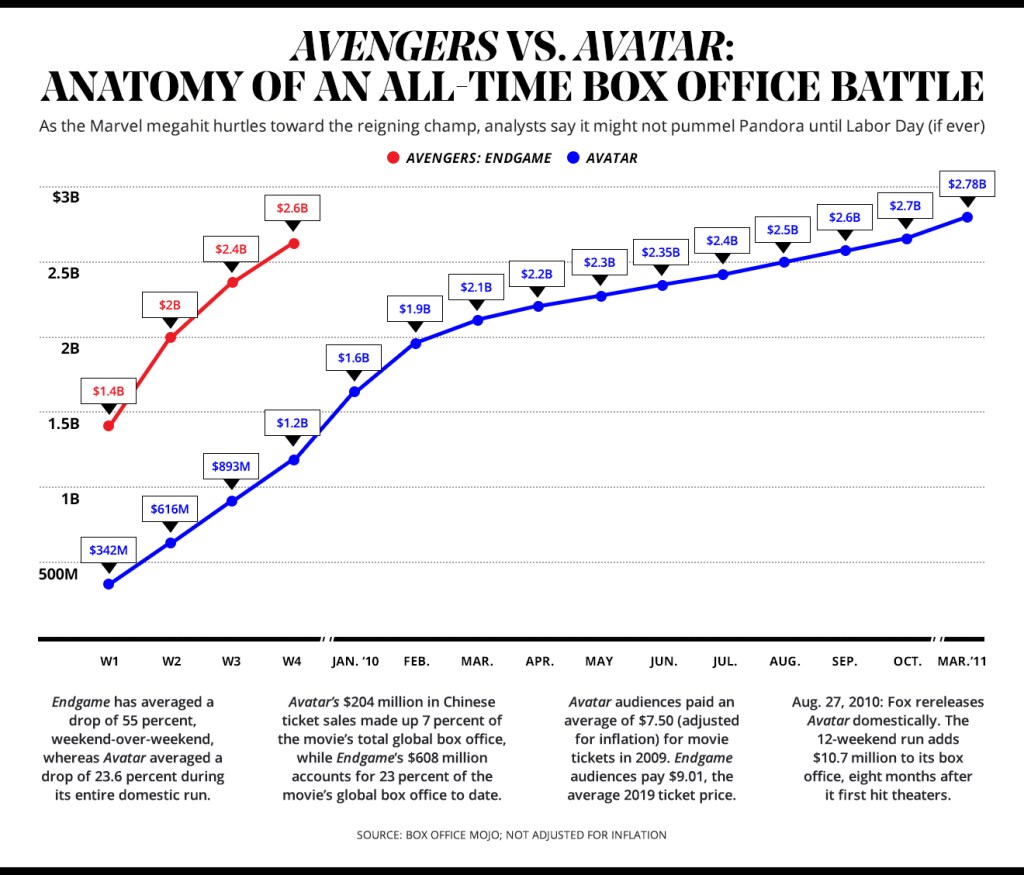