Universal and director F. Gary Gray’s The Fate of the Furious fired up its engines with $45.6 million on Friday for a $104 million domestic debut.

That would represent one of the top Easter openings of all time, as well as the second best start for the franchise.

The eighth outing in the action franchise, commanding an A CinemaScore, is also opening around the world this weekend and should finish Easter Sunday with $400 million in global ticket sales. China, where it is already breaking records, could bring in $200 million alone.

In April 2015, Furious 7 — the final film in the series to star Paul Walker, who died in a tragic car crash in November 2013 — debuted to a record-shattering $147 million domestically after earning $15.8 million in Thursday previews.

On the international front, Fate of the Furious scooped up $58.4 million from 41 markets on Thursday to post Universal’s highest-grossing Thursday ever. The early international total, including Wednesday and Thursday openings, stands at $82.2 million, with the movie checking in as the No. 1 opening in every territory where it’s been released.

In China alone, the movie kicked off with midnight shows on Thursday at which it grossed RMB 60 million ($8.7 million). The early estimate for Friday’s box office amounts to RMB 380 million ($55.2 million gross). The movie’s Friday opening is chalking up a number of records: biggest opening day of all time; biggest single day box office of all time; and biggest Friday of all time. By the end of the day, the movie is expected to chalk up RMB 380 million or $55.2 million.

Heralded for their diverse casts and globetrotting storylines, the Fast and Furious movies have collectively grossed more than $3.9 billion globally. Furious 7 was far and away the biggest earner and the only installment to cross $1 billion on its way to finishing its worldwide run with $1.516 billion.

Fate of the Furious certainly spooked the competition — there is no other movie opening nationwide this weekend.

On Thursday night, the tentpole grossed more than $10 million in previews. As of Friday morning, the movie is playing in more than 4,310 theaters, the widest release in history for a non-summer title. 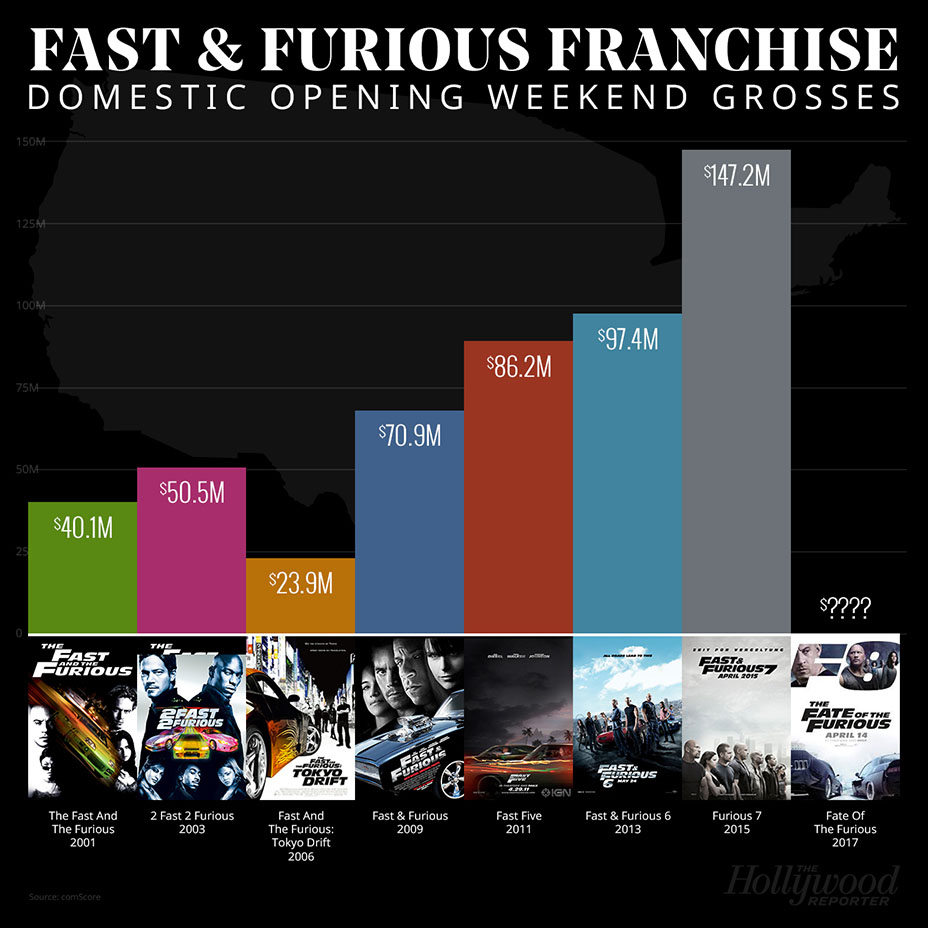