Call it the August Death March at the domestic box office.

Over the Aug. 11-13 weekend, revenue plunged 32 percent behind the same frame last year sans a successful August tentpole such as Suicide Squad (2016) or Guardians of the Galaxy (2014), furthering a steady erosion in ticket sales that has gripped the summer box office almost every weekend since War for the Planet of the Apes launched in the first half of July.

To date, revenue for the season is pacing 12.4 percent behind last year — and it’s only going to get worse.

The remaining three weeks of summer are notably bereft of potential big earners, and Hollywood has abandoned Labor Day altogether. There aren’t any movies opening nationwide over the holiday weekend now that STX Entertainment has taken action-thriller Renegades off the calendar and The Weinstein Co. moved up animated family film Leap! to Aug. 25.

Labor Day is always slow in terms of moviegoing, but it has been a quarter of a century since the marquee didn’t have at least one new wide offering.

“The lack of any wide release on Labor Day weekend for the first time in years is a symbolic and fitting curtain closer on a very rough summer at the multiplex. Despite a great lineup of films, the failure of at least a handful of summer tentpoles to connect with audiences and critics unfortunately left the season high and dry,” says analyst Paul Dergarabedian of comScore.

Dergarabedian isn’t ready to project a final summer revenue figure, but Hollywood studio insiders who have crunched the numbers believe it will finish up at between $3.76 billion and $3.85 billion, the lowest showing since 2006 ($3.749 billion) and a 13-15 percent drop over summer 2016. If it falls more than 15 percent, that would be the worst decline in modern history, worse than the 14.5 percent dip in 2014.

And it would be the first time since 2007 that revenue didn’t clear the $4 billion threshold.

As a result of the downturn, publicly held theater chains including mega circuits AMC Entertainment and Regal Entertainment are taking a beating at the stock market.

Jeff Bock of Exhibitor Relations adds that the number of tickets sold this summer will hit a 25-year low when dividing overall revenue by the average ticket price, or around 420 million tickets sold. (Unlike overseas, there aren’t actual admission figures in the U.S.)

August will be especially brutal on a collective basis, according to Bock. “Hollywood totally missed the boat,”  he says.

The month commenced with Sony and MRC’s event film The Dark Tower, which has limped to a 10-day gross of $34.2 million. And this past weekend, Open Road’s sequel The Nut Job 2: Nutty by Nature debuted to $8.3 million from 4,003 theaters, less than half the original 2014 film and the worst start ever for a movie opening in more than 4,000 cinemas.

That doesn’t mean there haven’t been, or won’t be, individual August success stories, such as New Line’s Annabelle: Creation, which crushed The Nut Job 2 with a strong $35 million debut. The Hitman’s Bodyguard, starring Ryan Reynolds and Samuel L. Jackson, is tracking to open to $18 million or more over the Aug. 18-20 weekend, more than double the tracking for Steven Soderbergh’s Logan Lucky, around $8 million.

The forecast is bleak for the final three wide releases of summer, which open the following weekend. Tracking has the animated Leap! launching in the $5 million range, while BH Tilt’s genre film Birth of a Dragon could do around $2 million. Sony’s faith-based film All Saints also debuts.

Year to date, domestic revenue is down roughly 4 percent. The good news is that the international box office is up nearly 4 percent year to date (seasonal data isn’t available), putting global revenue ahead of last year by 1.5 percent, according to comScore. 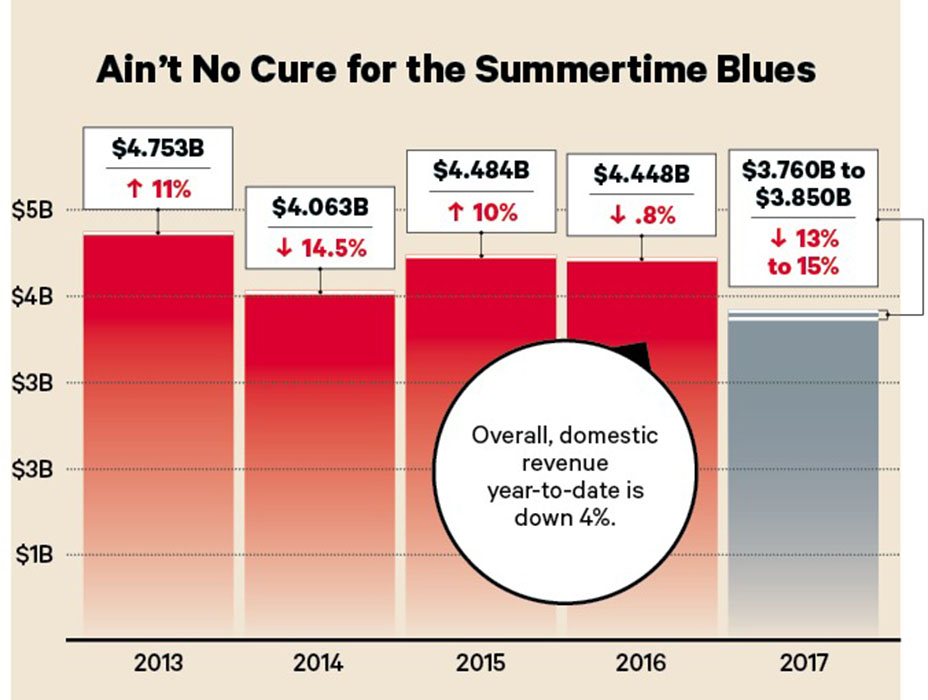