Although the summer box office didn’t set any benchmarks, 2018 is heading toward a record haul — and all because studios that once viewed certain months as dead zones have relocated some tentpoles to less competitive corridors.

For the first time in history, the year’s top-grossing movie in North America so far — Black Panther — didn’t debut in summer or during the year-end holidays but in February. Disney’s superhero pic opened to a massive $202 million on its way to grossing $700 million domestically, the third-best showing of all time. Then Venom struck with a stunning $80 million debut over the Oct. 5-7 weekend — the best opening ever for that month. Add A Star Is Born, also doing stellar business, and October has never looked so good.

As a result, domestic revenue, up nearly 10 percent from 2017, is now headed for a record year — analysts are projecting $11.6 billion to $11.8 billion, possibly even $12 billion — eclipsing 2016’s $11.4 billion. Detailed stats aren’t available for international, but comScore shows foreign revenue up 1.2 percent so far, so overseas could end the year with a record $30 billion for a global haul of $41 billion-plus. In the process, buoyant off-peak ticket sales have upended Hollywood’s decades-old reluctance to place its biggest bets outside the summer season or the Thanksgiving-to-December corridor, when kids and college students are out of school. With back-to-back tentpoles crowding those periods, studios have been forced to explore the entire year.

“Old myths die hard,” says Sony Motion Pictures Group chairman Tom Rothman of the studio’s Venom, the first major superhero title to open in October. “Where to place a movie should be determined by the film and the competition. But until necessity forced studios to expand the calendar, nobody took the risk.”

The shift to a year-round calendar has come in fits and starts. Back in 2009, Universal fled a crowded summer schedule and opened Fast and Furious on April 9. The gamble paid off, reviving the franchise by earning $155 million domestically and $363 million globally. The following year, Disney raised eyebrows by opening Alice in Wonderland in early March, but it quickly set a record for the month with $334 million in North America and $1 billion globally. One by one, dates once considered dumping grounds have turned into lucrative opportunities. When Warner Bros. and New Line’s horror movie It rolled out on Sept. 8, 2017, it opened to $123.5 million domestically — a summerlike number — while scaring up $700 million worldwide. New Line followed up this September with The Nun, which opened to a September second-best of $53 million.

“The conventional wisdom has been that blockbusters needed to be released in the summer or holidays to chase the largest available audience,” says Patrick Corcoran, National Association of Theatre Owners vice president. “This year has made it clear that the audience will follow the movies.” 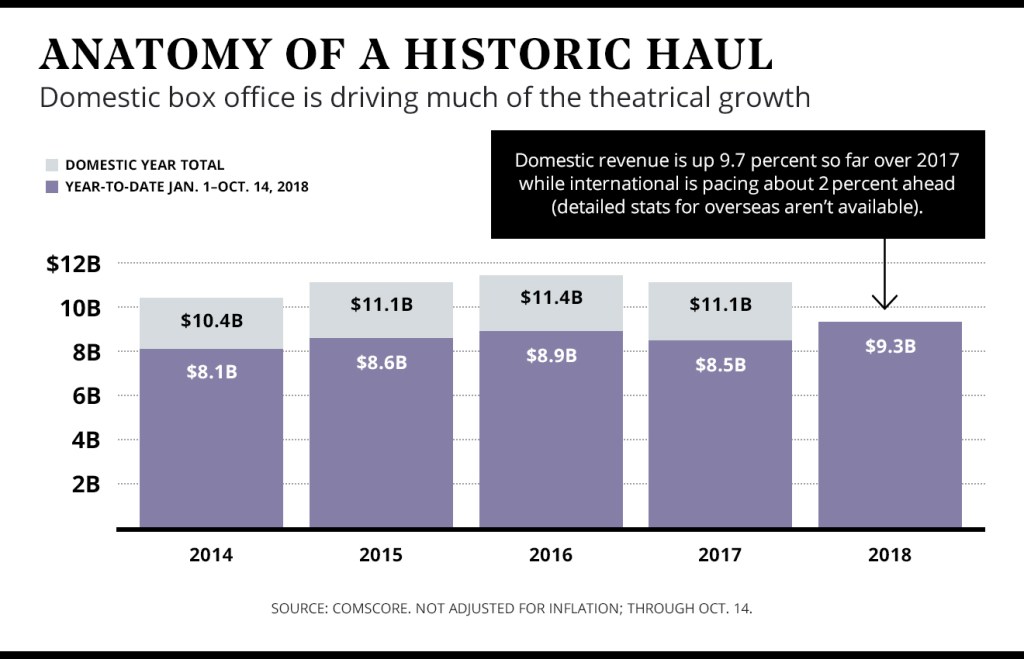