On its first Tuesday (July 16), the troubled action-comedy Stuber took in a surprisingly strong $1.4 million, up a huge 72 percent from the day before and not all that far behind the $2.2 million it earned Sunday. The secret behind the number wasn’t a post-opening marketing blitz waged in hopes of salvaging the R-rated Fox film, but a “discount Tuesday.”

In thousands of theaters across the country, the cost of a ticket on that day can be a third of the normal price — as low as $6 in New York and Los Angeles, the two most expensive U.S. moviegoing markets, where a ticket now costs upward of $17 or $18 (and that’s for a no-frills format). The overall revenue generated Tuesdays is substantial, fueling new momentum behind the argument that cinema chains should get more creative about what they charge, with such approaches as variable pricing, whereby the cost changes depending upon the movie, and dynamic pricing, based on time of day and day of the week.

The deficit between the haves and have-nots at the box office so far this year has resulted in revenue running nearly 7 percent behind 2018 (it was 9 percent before the muscular opening of The Lion King over the July 19-21 weekend). Consumers — distracted by Peak TV choices and streamers — increasingly reserve their moviegoing dollars for the biggest spectacles, leaving smaller and midrange titles such as Stuber in the lurch. Perhaps charging less for smaller-budget films would boost attendance, allowing them to compete. “Stuber should not be the same price as Avengers: Endgame or Star Wars,” says longtime distribution executive Chris Aronson, formerly of 20th Century Fox. “It just shouldn’t be.”

Across Hollywood, many are beginning to wonder if 2018’s bonanza at the North American box office — where revenue hit a record $11.9 billion — was thanks to MoviePass, the subscription service that at one point let its patrons see one movie a day for a mere $10 a month (in contrast, the average ticket price in 2018 was $9.11, while the average for the first half of 2019 is $9.16). For example, last summer, MoviePass patrons contributed 13 percent of the opening weekend revenue for Tag, an R-rated comedy from Warner Bros. that debuted to $14.9 million on its way to a domestic total of $54.7 million. Stuber, by contrast, started off with a paltry $8.2 million over the July 12-15 weekend.

“That’s the lesson of MoviePass — people will go to the movies more if price isn’t an impediment,” says Aronson. “I worry that Netflix has come along with a very attractively priced entertainment package that theaters can’t keep up with, except for the movies people absolutely want to see.”

Variable pricing faces enormous resistance, although theater chains and Hollywood studios continue to discuss the controversial practice, according to insiders. Some studios are less resistant than others; ditto for the exhibition circuits. “When you charge a lower price, right there you are saying the movie isn’t as good as another film. You are saying you have to discount it in order for people to show up,” says analyst Eric Handler of MKM Partners. “I don’t think that is something you will see anytime soon.”

No U.S. chain has tested variable pricing in a serious way. In late 2017, then-CEO of Regal Amy Miles said her circuit would try the practice in certain markets in partnership with Atom Tickets. But the experiment was soon abandoned after Cineworld said it was buying the mega-circuit. Several European chains have a long practice of offering dynamic pricing depending on the time of day and day of the week — a scheme also used by the hotel and airline industries, in addition to Broadway — but variable pricing is likewise scarce. In 2014, an outcry ensued when Lionsgate UK CEO Zygi Kamasa suggested that British films should cost less than Hollywood titles to give them a fighting chance at the U.K. box office.

For now, the answer for theater owners in terms of increasing demand isn’t dynamic pricing, but their own, tailor-made subscription services. AMC Theatres, the largest U.S. chain, allows moviegoers to see three films a week for $20 to $24 a month, depending upon the location. Its program has amassed more than 800,000 members since launching last year. For $10 a month, Cinemark offers one free ticket per month and discounts on concessions, among other perks. Regal is expected to launch its service soon.

The upscale Alamo Drafthouse Cinema chain appears to be offering a plan closest to MoviePass. Now in the beta phase, the monthly subscription would allow patrons to see one movie per day. “We’ve opted to put all our chips on this model,” says Alamo co-founder and CEO Tim League, who has philosophical issues with dynamic pricing. He says the subscription plan, called Season Pass, serves the same function by prompting the consumer to attend more movies, and not just the must-watch pics like Avengers: Endgame. “We’re seeing huge upticks, and the biggest beneficiaries are the mid-tier films, like Eighth Grade, Booksmart and Late Night. We assume people are going to see Avengers.” 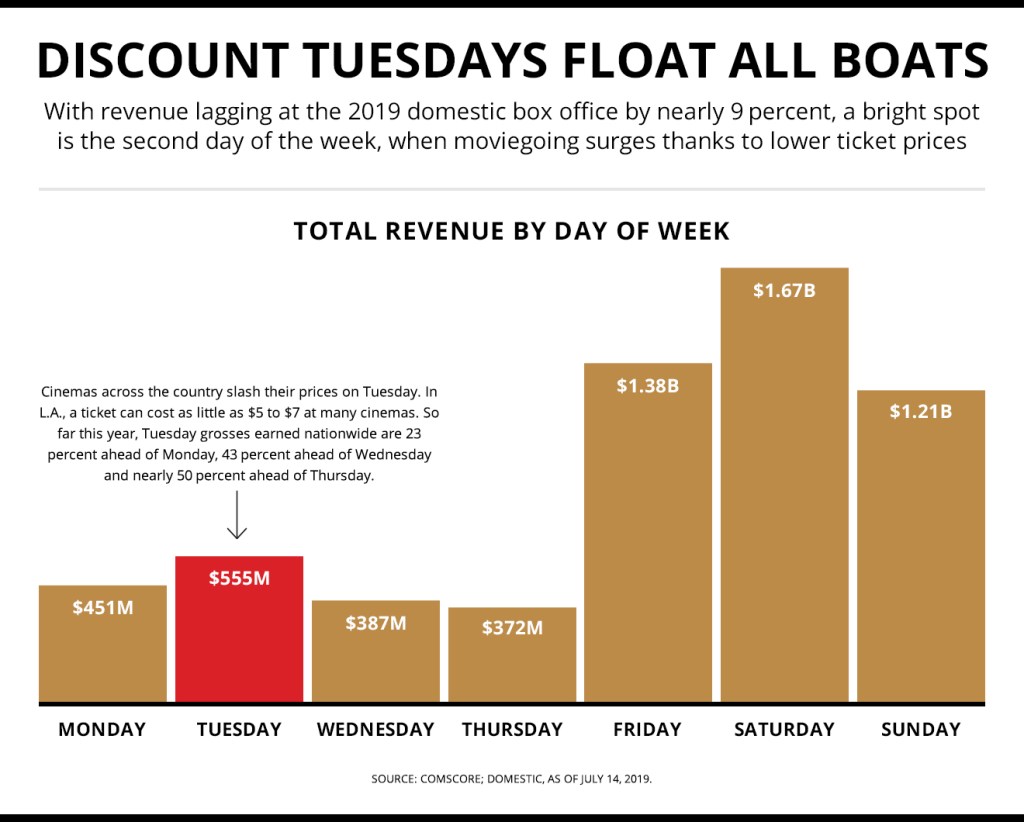 A version of this story appears in the July 19 issue of The Hollywood Reporter magazine. To receive the magazine, click here to subscribe.