By April 3, the greatest calendar migration in the 100-year-plus history of the movie business was complete as virtually all major summer tentpoles relocated amid the coronavirus pandemic in a mega-game of dominoes that has reshaped the 2020 and 2021 release slates, and beyond.

The shuffle revealed the industry’s collective hope — at least for the time being — that moviegoing will return to normal levels by mid-July, evidenced by Warner Bros. sticking to its July 17 date for Christopher Nolan’s Tenet and Disney’s announcement that Mulan, originally set for March 26, will now ride into theaters on July 24 while Warner Bros. has pushed back Wonder Woman 1984 from early June to Aug. 14.

If this scenario holds, North American box office revenue will struggle to hit $7 billion for the year, the lowest figure in more than two decades and nearly 40 percent behind 2019 ($11.4 billion), per London-based research firm Gower Street Analytics.

The company estimates that domestic revenue will come in at $6.82 billion if all 5,400 theaters stateside stay shuttered for a full three months, with traffic returning to normal levels immediately. If theaters are closed for three months, but traffic builds slowly, that number could be in the $6.36 billion range.

Virtually all of the 5,400-plus theaters in the U.S. were shut by March. The best-case scenario is a two month closure, which would put revenue in the $7.09 billion to $6.82 billion range depending upon how quickly consumers return, according to Gower.

“The studios have looked at the situation and realized they cannot fit everything into the end of this year. They’ve had to accept that this year is going to take a big hit,” says Gower Street head of theatrical analytics Robert Mitchell. He notes that the films pushed to 2021 — including F9, Jungle Cruise, The Eternals, Minions: The Rise of Gru and the next Ghostbusters installment — amount to more than $1.8 billion in lost revenue this year domestically.

Globally, box office revenue clocked in at a record $42.2 billion in 2019. Most analysts don’t yet have a target number for 2020, but if the estimated year-over-year drop in North America is an indication, the movie business could be facing a worldwide total hovering around $25 billion, if not closer to $22 billion.

In China — the world’s second-largest moviegoing market after the U.S. and Canada — cinemas have been closed since the end of January.

Studio executives and box office analysts caution that box office traffic may not return in earnest immediately. They also caution there could be more calendar changes if theater closures are extended. At the same time, the Hollywood ecosystem isn’t abandoning the theatrical experience. Almost every major movie has been pushed to a later date, rather than deciding to go straight to home entertainment (Universal’s Trolls World Tour and Disney’s Artemis Fowl are two exceptions).

“I think people will want to go the movies once this over, but it will be a process for people to build their confidence,” says Paul Dergarabedian of Comscore. “I think it will behoove every public-facing business to roll out slowly. The last thing anybody wants is quick ramp-up and then have another set of closures.”

Paramount domestic distribution chief Chris Aronson — who assisted in deciding upon a new early September release date for A Quiet Place Part II and a new December rollout for Top Gun: Maverick — agrees. “There’s no template for this. It’s like trying to work a Rubix’s cube. And frankly, I believe the release calendar will continue to be in flux. At the same time, entertainment outside of the home will be more important than ever.” 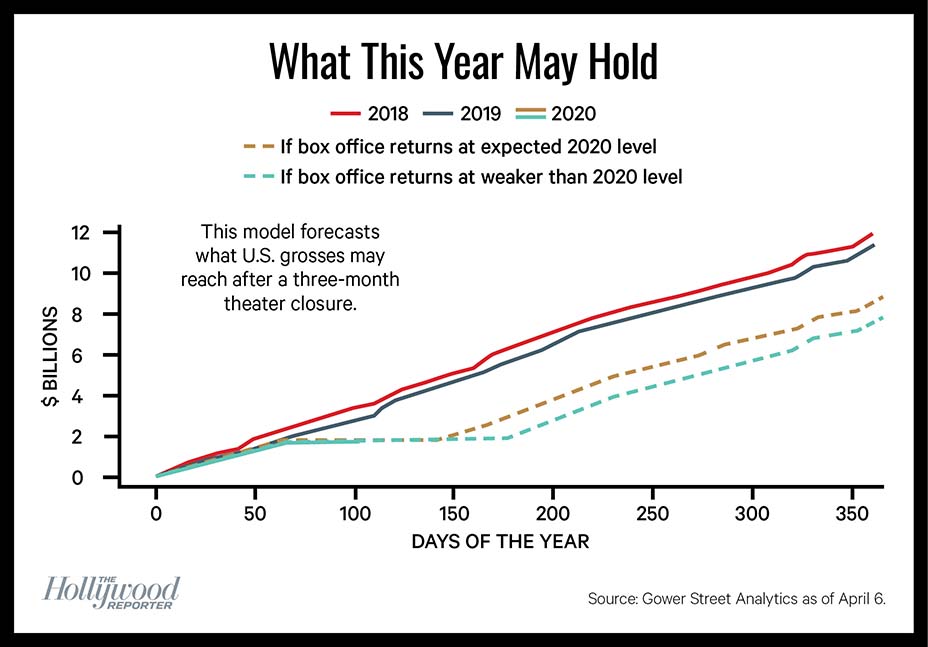