Longtime fans of Marvel’s Jessica Jones are in for a treat.

Superstar writer Brian Michael Bendis and artist Michael Gaydos are reteaming after their work on Jessica Jones and Alias, the groundbreaking series for Marvel’s MAX imprint that introduced the world to the failed superhero-turned-private detective in 2001.

The new series is called Pearl and will be released by Bendis‘ creator-owned Jinxworld, in partnership with DC Entertainment, where the writer has made his home after years at Marvel and has already unveiled plans to write Superman.

The new project centers on Pearl, a tattoo artist for the Yakuza, who lives in modern day San Francisco and falls in love with a counterpart from a rival faction. The series launches in August, and Bendis says he and his artist are well aware that their reunion will come with high expectations, particularly after Jessica Jones has risen to new levels of popularity following the Netflix series starring Krysten Ritter as the character.

“We knew it had to match what people perceive Jessica to be and that what and we came up with had to be an equally, if not more complex, character in Pearl,” Bendis tells Heat Vision of the new series.

Pearl is just one of several announcements Bendis is making Friday at Emerald City Comic Con in Seattle.

Bendis is also teaming up with acclaimed artist David Mack for another new Jinxworld title, Cover — which is inspired by a true story in which the intelligence community recruits a well known comic book artist as a spy. Bendis describes it as having nods to films like Confessions of a Dangerous Mind and The In-Laws

Mack, known as the creator of Kabuki, previously worked with Bendis on Jessica Jones and Powers and is one of his closest friends in comics.

“Who has a better cover story than comic book artists and writers, who get to travel the world and no one is actually paying attention to what they’re doing?” says Bendis. “David and I have had a lot of travels over the last few years and we are going to have a lot of fun examining the world of espionage through the world of Comic-Con.”

Cover will launch this fall.

Finally, one more treat for Bendis fans: more than 150 of his Jinxworld periodicals and collected additions — such as Brilliant, Fire, Fortune & Glory, Goldfish, Jinx and Torso — are now available digitally via readdc.com, the Vertigo app for iOS, Comixology and Amazon Kindle. And until March 7, several No. 1 issues from Jinxworld are available to download for free.

Below, Bendis delves deeper into the origins of these titles and how a health scare in December helped give him more drive than ever.

Why is now the right time to reteam with Michael Gaydos?

We’ve been slow-cooking this stew, because we knew we were going to do a creator-owned book together and then when the TV guys made Jessica Jones a pop culture icon, we knew that no matter what we were going to do, it had to be up there … What we sat down to do was make sure we were telling a tale that was unique and original, and at the same time had a character that I had never seen before doing things I had never seen before, and Mike came to the table with some really interesting visuals.

Pearl is about a tattoo artist who falls in love with a rival. What else can you reveal?

We have a tattoo artist with a very special skin condition that will make the tattoos on her body very unique — and you’ll see in the very first issue what’s unique about her and the way she makes her tattoos and what her tattoos on her look and feel like. But it also tells the story of two people who are born in this situation that have grown up and find out they may be very different than the situation they were born in. I see this going on a lot lately, more than ever before, where people grow up and go “OK, I was born into this situation, but I really feel I might be a different kind of person,” and find a way. Or they build their own family or they make their own happiness, and that’s the story we are going to tell.

It is. Very intimate. Very romantic. There are very few comics that are just flat out romantic, and to me romance is the most precious, dangerous thing and putting that in this world full of dangerous people, it’s the thing you most want to fight for, so she is going to have to fight for that which she didn’t know she deserved until it was in front of her.

What were your conversations with Michael like about re-teaming for this?

I told him that I had a lot of research I had done on the Yakuza in America and what was happening to them. It also speaks to what’s happened to corporate America as well. It was an interesting way to talk about how the world works, but through this very unique organization and at the same time I had met some people, one person in particular, who was part of this world who was looking for any way out. And having long talks with them. Then Mike calls me up. “So, I bought a tattoo gun and I’m tattooing stuff to practice” and he found some stuff out about tattooing that made the book visually gorgeous and unique and some things about the character that I had not seen before.

Alias and Jessica Jones felt like they were from the real world. Is that the same here?

It’s a very different story, but it came from the same inspiration. Jessica herself is from the real world and real-world inspirations. I said if we do something together, it has to come from the same kind of inspiration, because people will know the difference. As soon as this fell into our laps, we were like “Yeah that’s it, we’re doing it.” We didn’t want to do “Here’s Jessica Jones at DC” or “a Jessica Jones we own.” We wanted to do something completely unique and different, with completely different visual touches. You have to remember, Mike has drawn Jessica Jones’ face like eight billion times. He is looking for something different to draw, and that’s my obligation, is to give him things that are equally cool

How did your collaboration with David Mack come about for Cover?

David and I have been friends for many years and worked on many projects together, this is his first new creator-owned since Kabuki. … David is like my brother. He literally stays at my house. We were working on a book we were going to do next year, but he came over and told me a story that happened to him, and I’m like “well that’s our book.” And that’s the book we are doing.

How are you feeling after your health scare in December and what did that support from fans mean?

Even going public with what happened to me, I don’t know if I would have done that. But I was supposed to be places and people were going to know I wasn’t there, so we wanted to tell the truth on what was going on. So we said, “Listen, something really bad happened.” The outpouring was insane. It’s hard to even describe. … My wife actually had a health scare too. Now that we’re both better, [it’s like] we’re shot out of a cannon. “I just looked into the abyss, I’d like to finish all of my projects before I look at it again.”

Being a father has inspired your work, as well as other life events. Did your health scare give you a new perspective in terms of your creative perspective, or is it more it gave you an urgency to get things out there?

The audience has showered me with appreciation and love, and I want to shower them back with work that I think that deserves what they already gave me, even though I know people would say they responded “because of the work you already did.” But I’m neurotic so I can’t hear that, so I am going to tell you, “I appreciate the nice thing you did, so I’m going to do something nicer…” That’s getting these books done and getting them out on time and making them hopefully the best books we’ve ever done, ever.

Take a look at the issues that will be available free for digital download from Jinxworld until March 7. 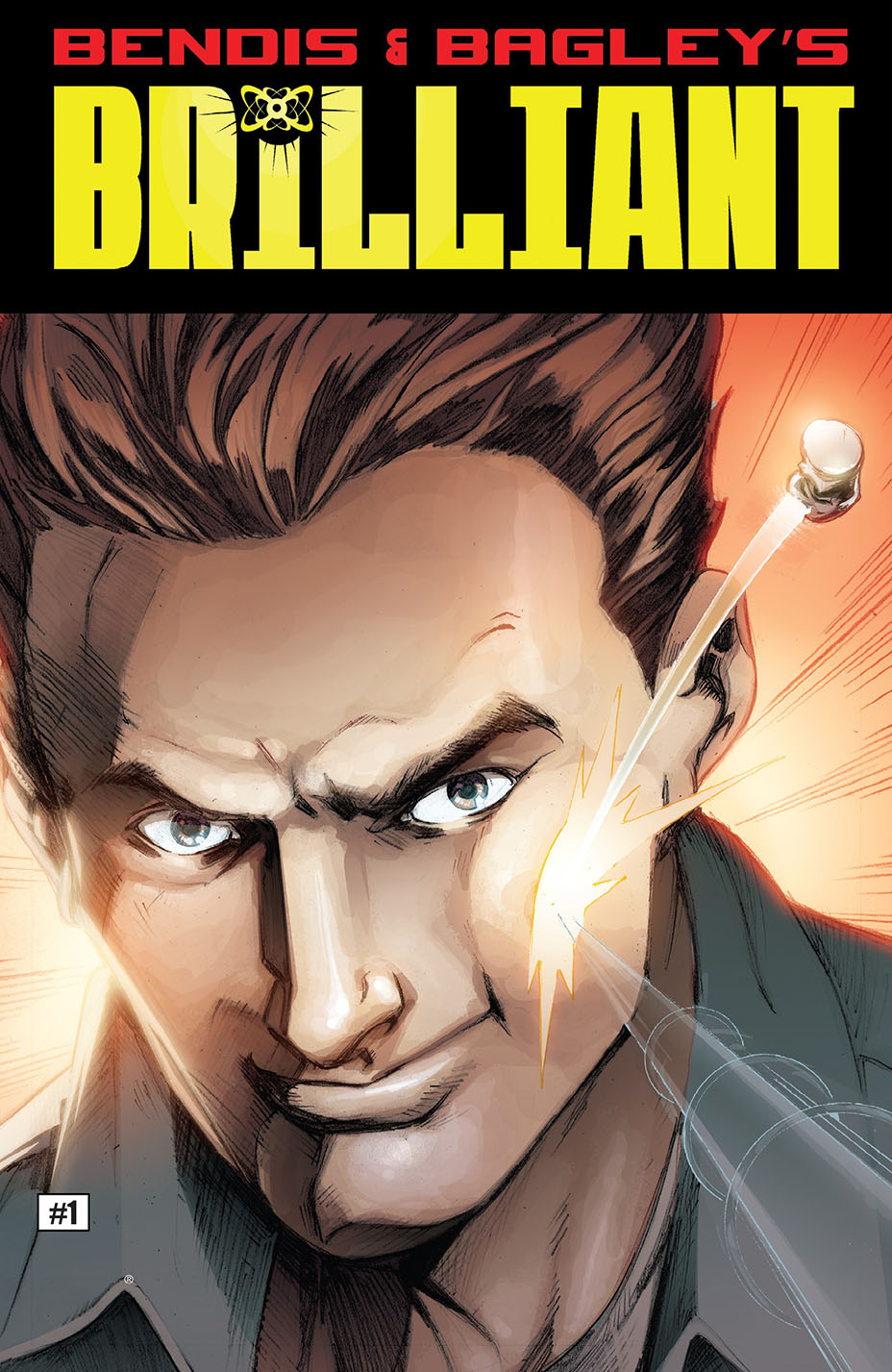 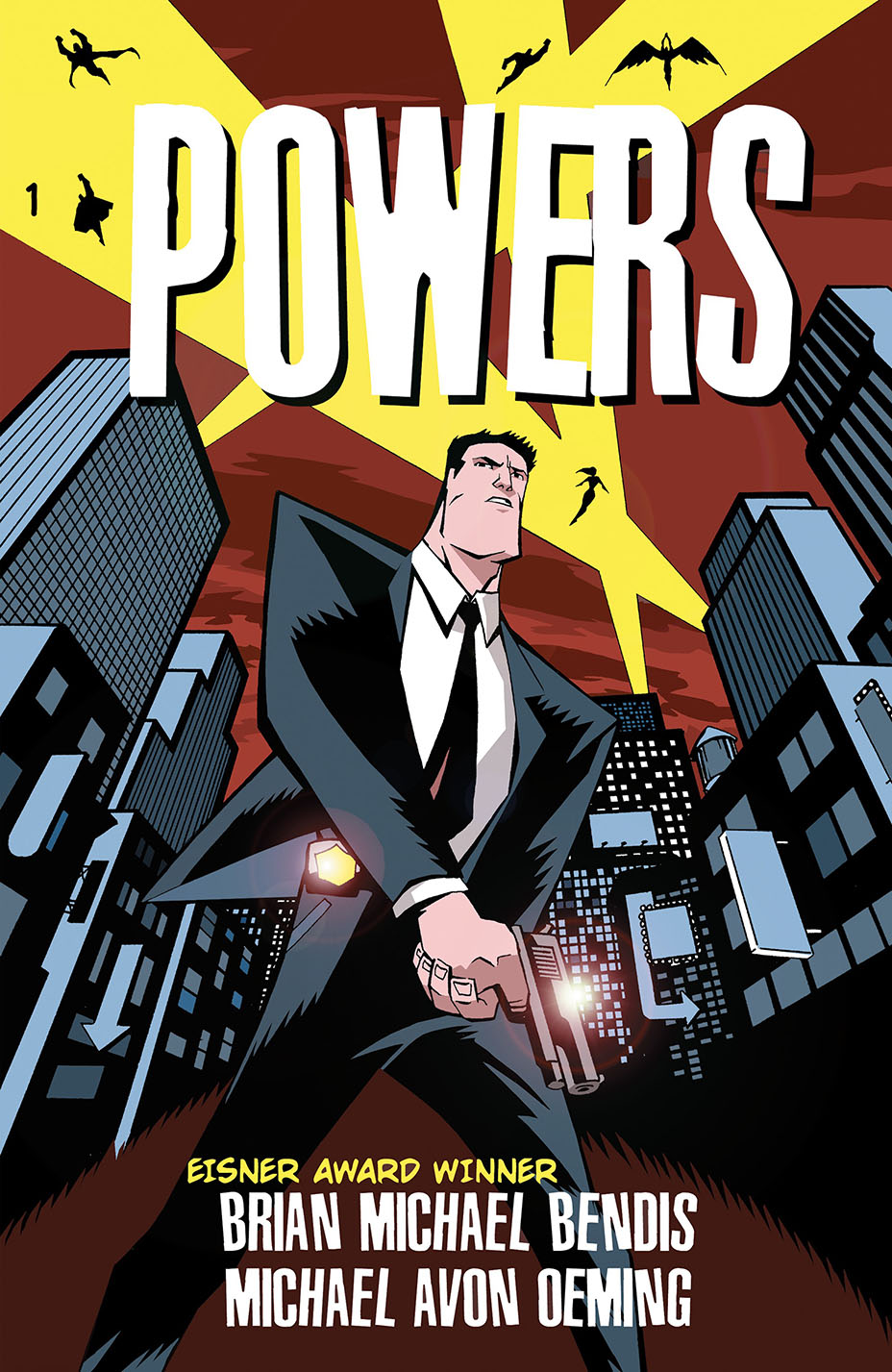 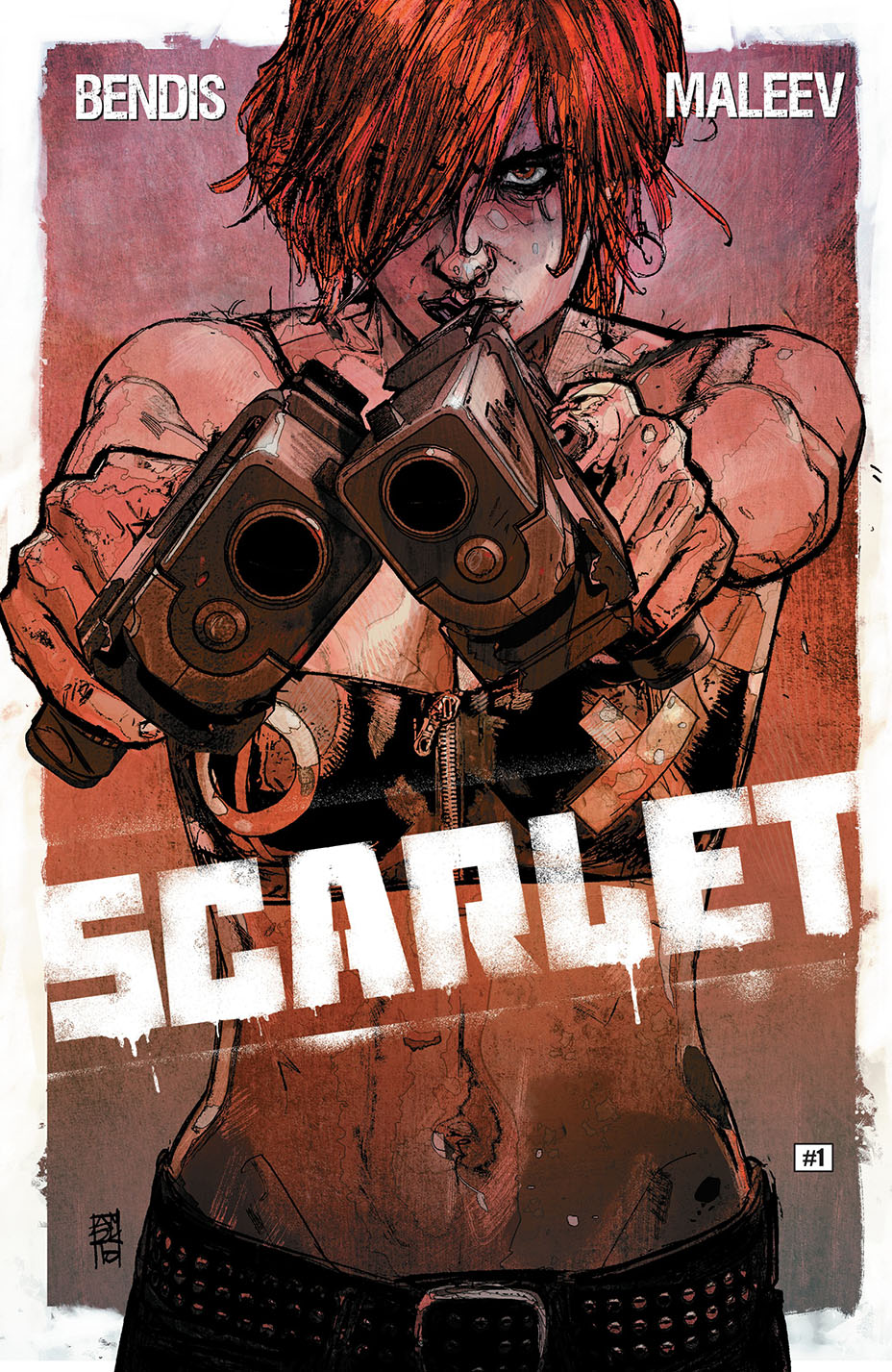 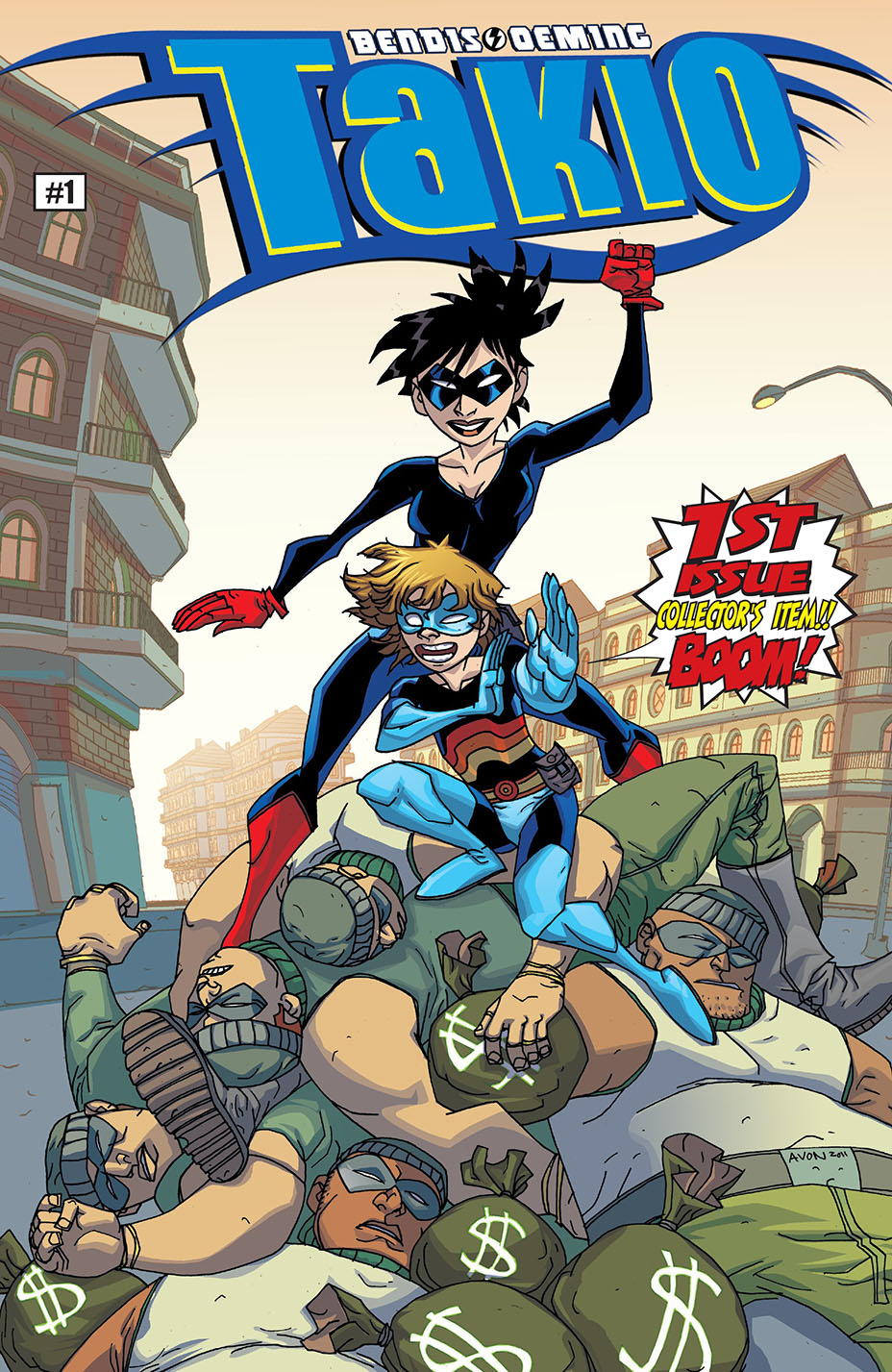 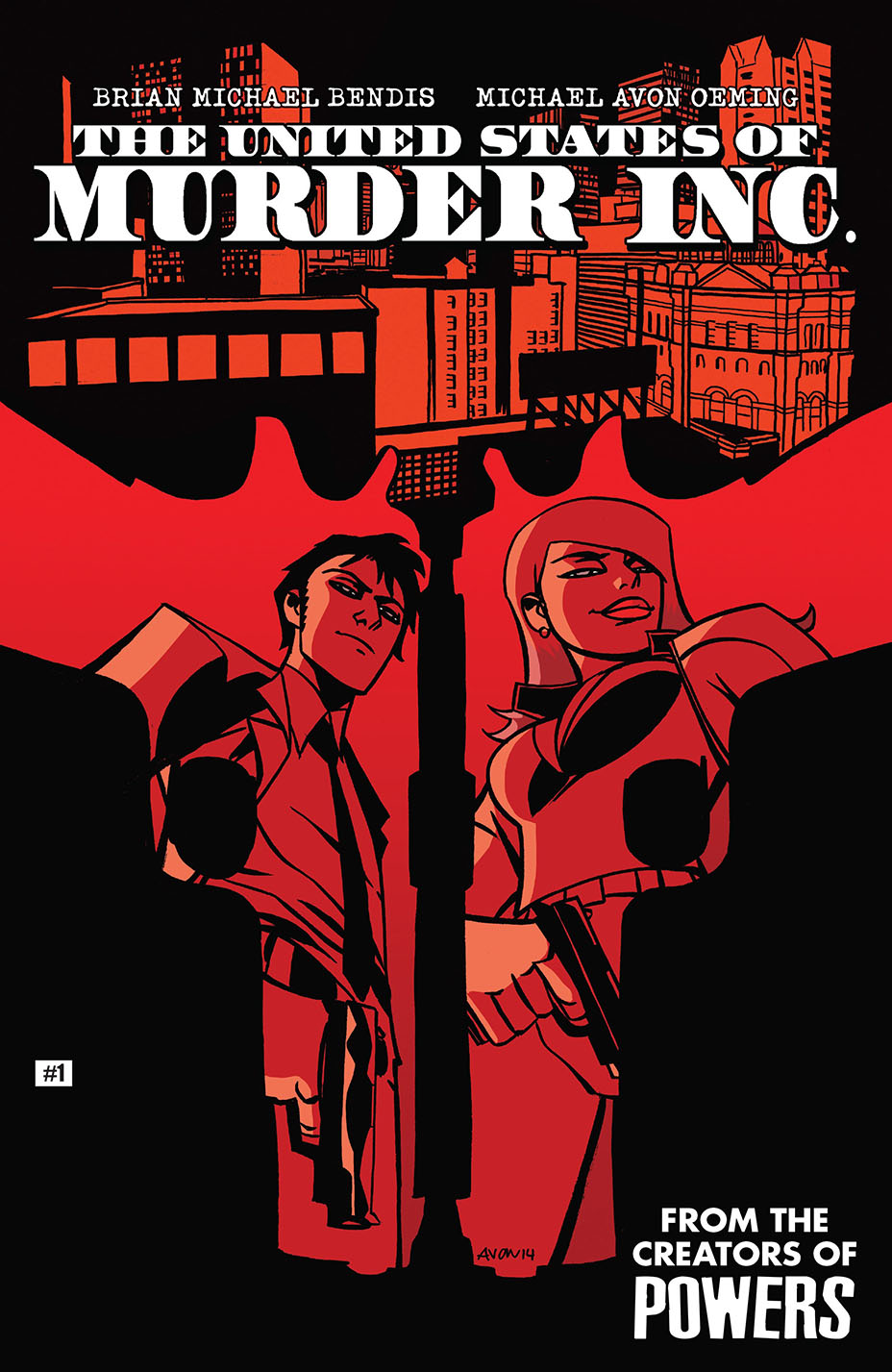 March 2, 10:20 a.m.: Updated to reflect that Bendis and Gaydos‘ most recent collaboration was Jessica Jones.