Brie Larson may be forced to remain tightlipped about Avengers: Endgame, but the star reveals she was kept out of the loop just as much when first joining the Marvel universe.

During a sit-down with Jimmy Fallon on The Tonight Show Wednesday night, the actress said she hadn’t even filmed Captain Marvel yet before filming the final Avengers film, so she wasn’t sure what to fully expect.

“I arrived and they gave me a piece of paper. It was a full page of dialogue and action and all of it was redacted except for my one line,” Larson said, also sharing that no one would tell her what other actors would be onset. “It wasn’t until I walked on set where I was like, ‘Oh, crap, I’m in a Marvel movie right now.’

She also explained that when filming Captain Marvel, she had to act by herself in front of a green screen where she had to speak to “five people” and say ‘Where’s Fury?’ but could only direct her gaze on the various tape marks that had been placed onset.

Larson then mentioned that the day Jackson arrived onset happened to be May 4, also known as a special commemorative Star Wars day. Aware that Larson was a Star Wars fan, Jackson decided to surprise the actress with a special gift.

“He walked in and dropped this bag in my lap. It was like a beautiful silk bag and I was like, ‘What is this?’ and it was his lightsaber,” Larson said.

“I just immediately burst into tears,” Larson said. “I don’t even think he’s supposed to have it. I’m not even sure I’m supposed to say that he has it.”

Nonetheless, Larson said she thinks Jackson has “cinematic immunity” and “does whatever he wants” including building his own lightsaber. “That’s one of the perks of being a Jedi, you get to build it yourself.” Larson also mentioned that Jackson’s lightsaber has something special engraved on it. When Fallon pressed as to what was actually engraved on the lightsaber, Larson decided to share but on the condition that she would be bleeped out. “Great, bleep this out! It says ‘bad motherfucker.'”

After starring in three projects with Samuel L. Jackson, Larson admitted that she has developed a great kinship with the actor. In fact, Larson explained why it was easy directing Jackson for her directorial debut, Unicorn Store. “I just know that he’s right and I don’t question it,” she said, also explaining that Jackson “can talk circles around you as to why he made that choice.” “He’s always right!”

Larson also said that to ease any stressful times, she would keep a hula-hoop on set, which came in handy: “The votes were coming in from the presidential election on set, and I was hula-hooping a lot.” She also mentioned that there would be ribbon dancers on set as well. To honor Larson’s stress-reliever technique, Fallon asked Larson to join him in hula-hooping. 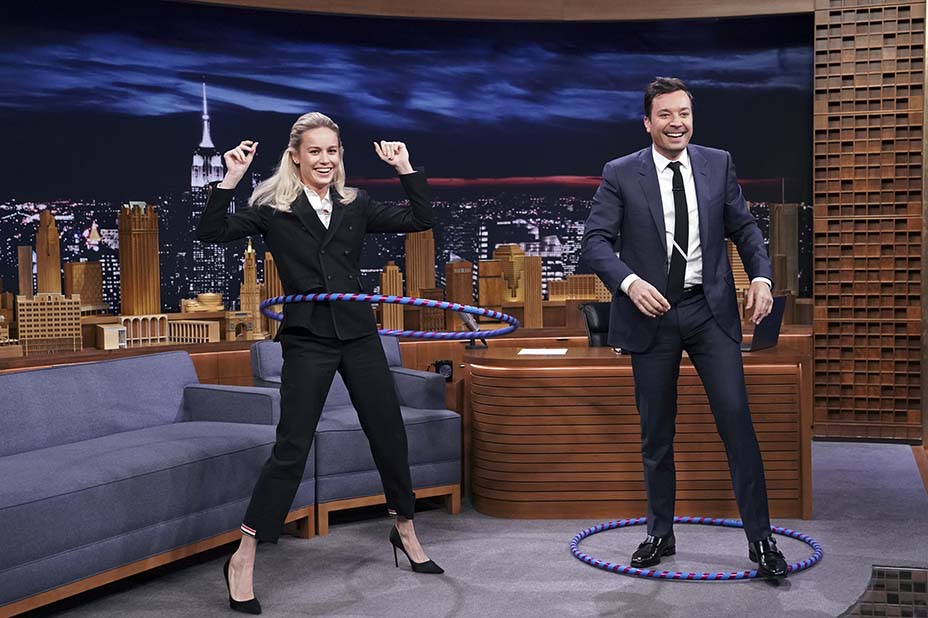 Later in the night, Larson and Fallon also showed off their VR skills in the game “Beat Saber.”